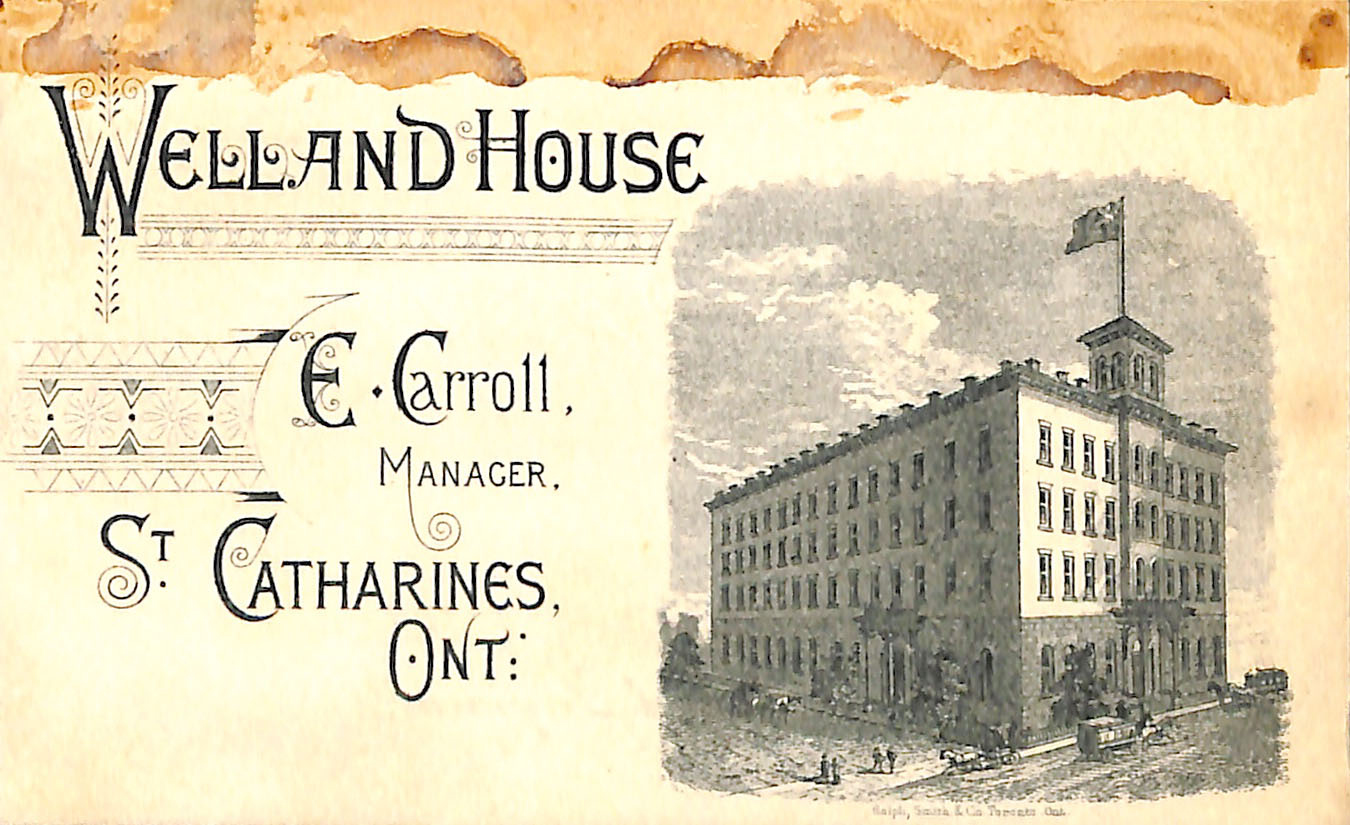 The historic Welland House Hotel in St. Catharines burned down Monday, July 12. The loss of the building is about more than bricks and mortar, says Brock Associate Professor of History Elizabeth Vlossak. (Image courtesy of Woodruff Family Fonds from the Brock University Archives)

When the Welland House Hotel burned down Monday, July 12, a significant witness to St. Catharines history was lost.

“Its value to our cultural heritage lay not so much in its bricks and mortar, or the artifacts within it, but in its role as a ‘witness’ to the historical events that have shaped our community over the past 170 years, and in the stories of the people who worked, stayed, played and organized there,” says Brock Associate Professor of History Elizabeth Vlossak. “The Welland House Hotel was a tangible link to our past, and a palimpsest of St. Catharines’ rich history.”

The changing role of the Welland House Hotel through time added many layers of meaning to the building, from its origins in 1853 as a mineral springs spa hotel, to the addition of the Wellendra Maternity Hospital wing in the early 1900s. The hotel was known for employing Freedom Seekers and was visited by celebrities and politicians. It was the home of the first Girl Guide troop established in North America by Mary Malcolmson in 1909, St. Catharines’ first radio station in the 1930s, and was a student residence for Niagara post-secondary students, in addition to housing the Brock student radio station.

“Even if the Welland House Hotel is rebuilt, we can never truly bring it back,” Vlossak says. “Now that the building is gone, it becomes even more important that we capture, record and preserve its stories and memories.”

In attempt to capture other local history, Vlossak will be working with students in HIST4F00 Voices from the Past to digitally preserve the Garden City Arena, also known as the Jack Gatecliff Arena, through oral history and community collecting this coming year.

For archaeologist Kimberly Monk, an adjunct professor with the Department of History, the Welland House “represents community.” 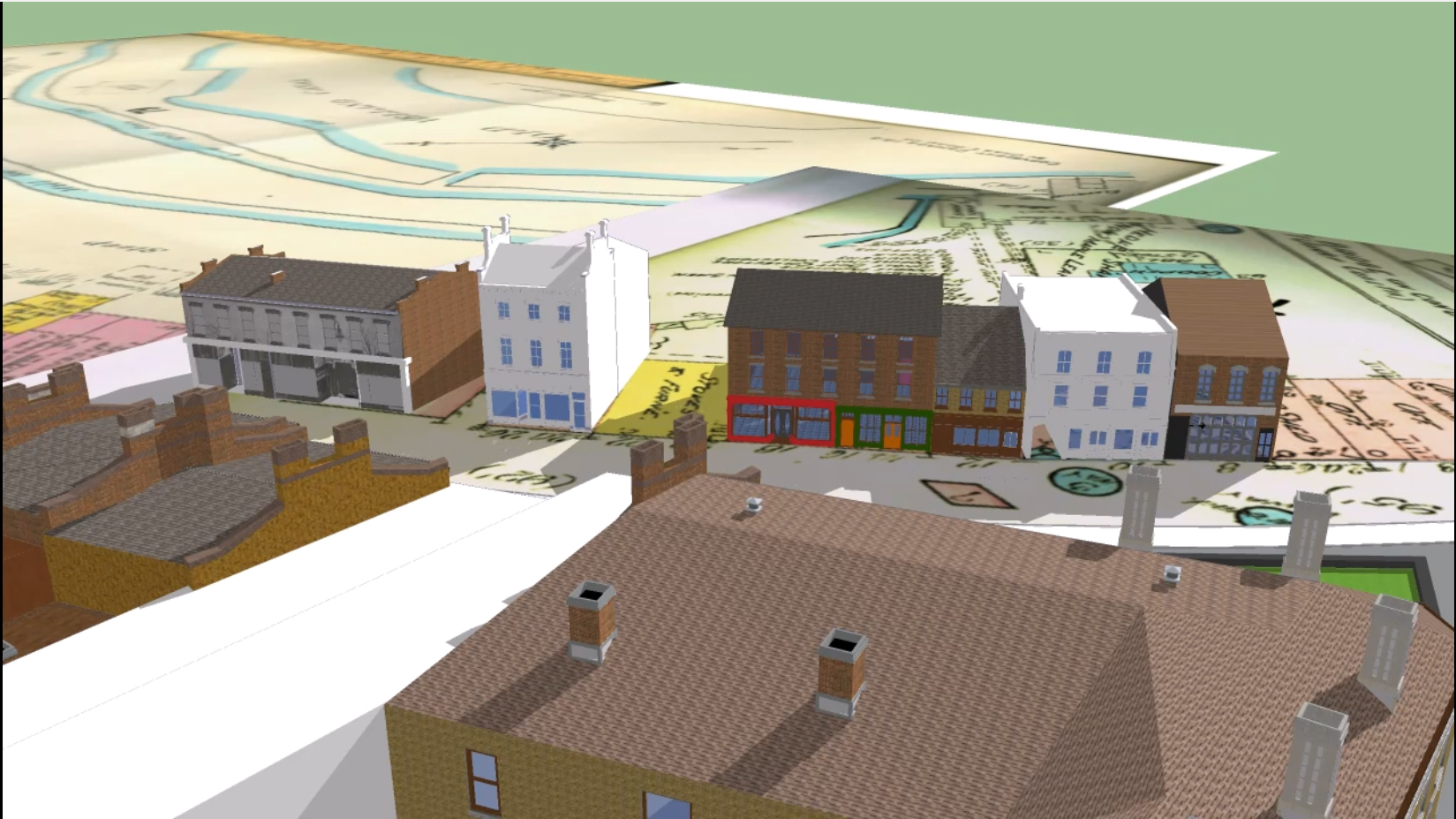 Students in HIST/IASC 3P93 will be working with John Bonnett to recreate the Ontario Street and St. Paul Street area streetscape of late-1800s St. Catharines. This screenshot is from a similar project recreating the streetscape from 1913. The finished 3D re-creation will be hosted as a digital exhibit by the St. Catharines Museum.

“From its opening in April 1856, this spa hotel hosted fundraisers that supported organizations such as the St. Andrew Society and Knox College, and the venue was also used for events to celebrate and thank the community,” Monk says.

Louis Shickluna, the Maltese-Canadian shipbuilder whose shipyard Monk’s team began excavating in 2019, was celebrated at the hotel in May 1871 by 80 of St. Catharines’ principal businessmen. According to the St. Catharines Evening Journal, Shickluna was presented with a gold watch, chain and diamond ring on behalf of the citizens of St. Catharines for the “many benefits” he had conferred on the town.

“The preservation of St. Catharines’ built heritage, such as the Welland House, is key to our understanding and appreciation of the region’s history,” says Monk. “The remarkable, historical character of St. Catharines will be lost if more attention is not paid to both its built and archaeological heritage.”

“It’s an irreplaceable loss,” he says of the hotel. “Significant heritage buildings are always at risk. There is always the danger we will lose more of them.”

Bonnett’s research involves 3D scanning of historic sites and buildings. He will be working with students in HIST/IASC 3P93 this year to digitally reconstruct the St. Paul and Ontario Street area for a digital exhibition hosted by the St. Catharines Museum.

Students will use 3D scanning of existing buildings and use photogrammetry to translate photographs into detailed 3D models of the historic streetscape as well as interiors of buildings.

The loss of the hotel gives greater impetus to the project, says Bonnett, who hopes it will create greater interest in areas like public history and heritage, and deepen residents’ interest in the preservation of their history.