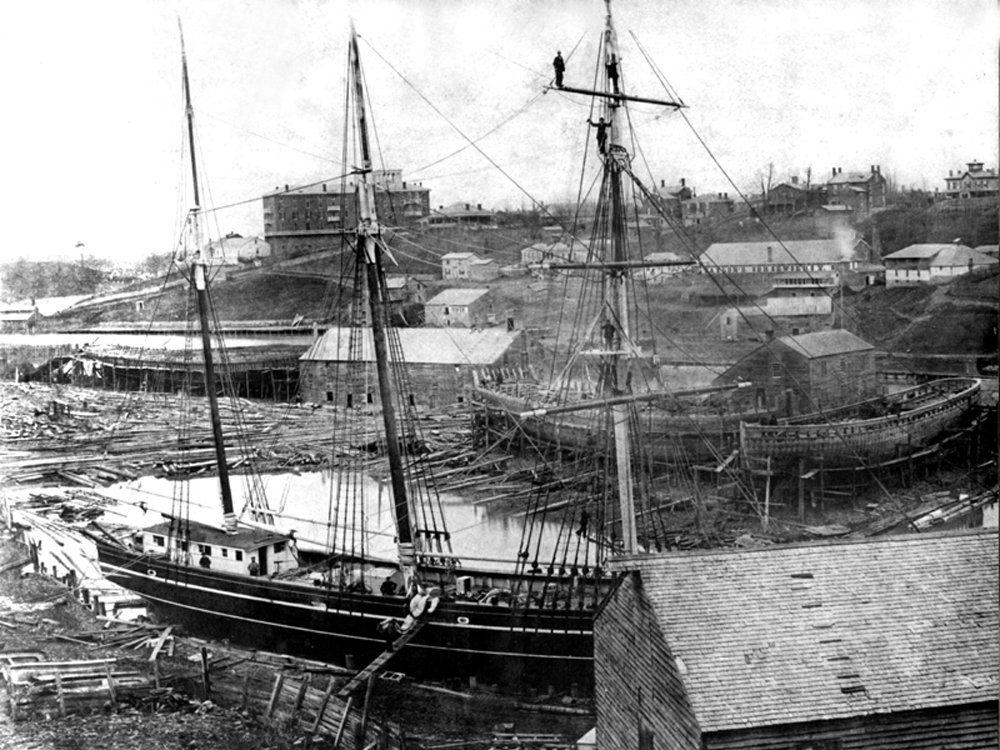 The Shickluna Shipyard operated from 1838 to 1891 along St. Catharines’ Twelve Mile Creek. The shipyard is pictured in 1864.

A ground-breaking research project on an abandoned plot of land will uncover an important part of St. Catharines’ past this summer, and the public is invited to participate.

Archaeological excavation at the historic Shickluna Shipyard along Twelve Mile Creek will start this July, and Brock’s Department of History is offering an archaeological fieldwork course open to students and community members.

“It will be an exciting research excavation and the first of its kind in Canada,” says Kimberly Monk, a maritime archaeologist and adjunct professor with the Department of History.

The fieldschool will run July 15 to Aug. 16. In addition to learning skills in archaeological survey and excavation, course participants will be trained in how to process artifacts and explore Niagara’s industrial heritage by visiting other key 19th century sites along the Welland Canal.

“We are delighted to involve Brock students and the Niagara community in our work at the Shickluna Shipyard,” Monk says. “They will be unearthing not only an important part of Niagara’s past, but one of Canada’s preeminent 19th century shipyards.”

“The fieldwork will answer key research questions about local and international trade, labour history, and the infrastructure of wooden shipbuilding, and highlight the connected legacies of port cities and their vital role in supporting community and economic development.”

The shipyard, one of two dozen established along the canal, was built by Maltese immigrant Lewis Shickluna, who is credited with building and repairing more than 200 ships between 1834 and 1894. In addition to the shipyard buildings and basin, he also built cottages for the workers.

Monk is hoping the team will find remains of the shipyard buildings, along with shipbuilding tools and possibly the hull of the schooner James Norris, a Welland Sailing Canal ship that was buried when the shipyard basin was filled in.

“The historic environment of the Welland Canals provides an ideal case study for understanding the maritime cultural landscape, with the potential for long-term research,” says Monk. Shipyards are an important part of the industrial landscape, where communities of skilled artisans participated in regional and global trade systems.

The two-year study of the Schikluna shipyard is being led by Monk and involves students and faculty from Brock, McMaster and Trent universities.

The project brings together experts in history, digital reconstruction and natural sciences. John Bonnett, Brock University Associate Professor of History, will be working with 3D modelling of artifacts and features found at the site. Colleen Beard, from Brock’s Map, Data and GIS library, will be contributing her extensive experience with Geographic Information Systems and the geovisualization of the historic canal.

Michael Pisarc, Professor with the Department of Geography and Tourism, will be examining paleoecological indicators to help understand climate change in Niagara. Joe Boyce, an Assistant Professor of Earth Sciences at McMaster University, will use geophysical and geo-archaeological methods to document coastline changes.

The project is funded by the Social Sciences and Humanities Research Council of Canada.

Although the site will be closed to the public during excavations for safety reasons, Monk and the team are planning several open house days for interested members of the public to visit and learn more about Niagara’s important industrial heritage.

Details about the archaeological field school are available on the Department of History’s website.