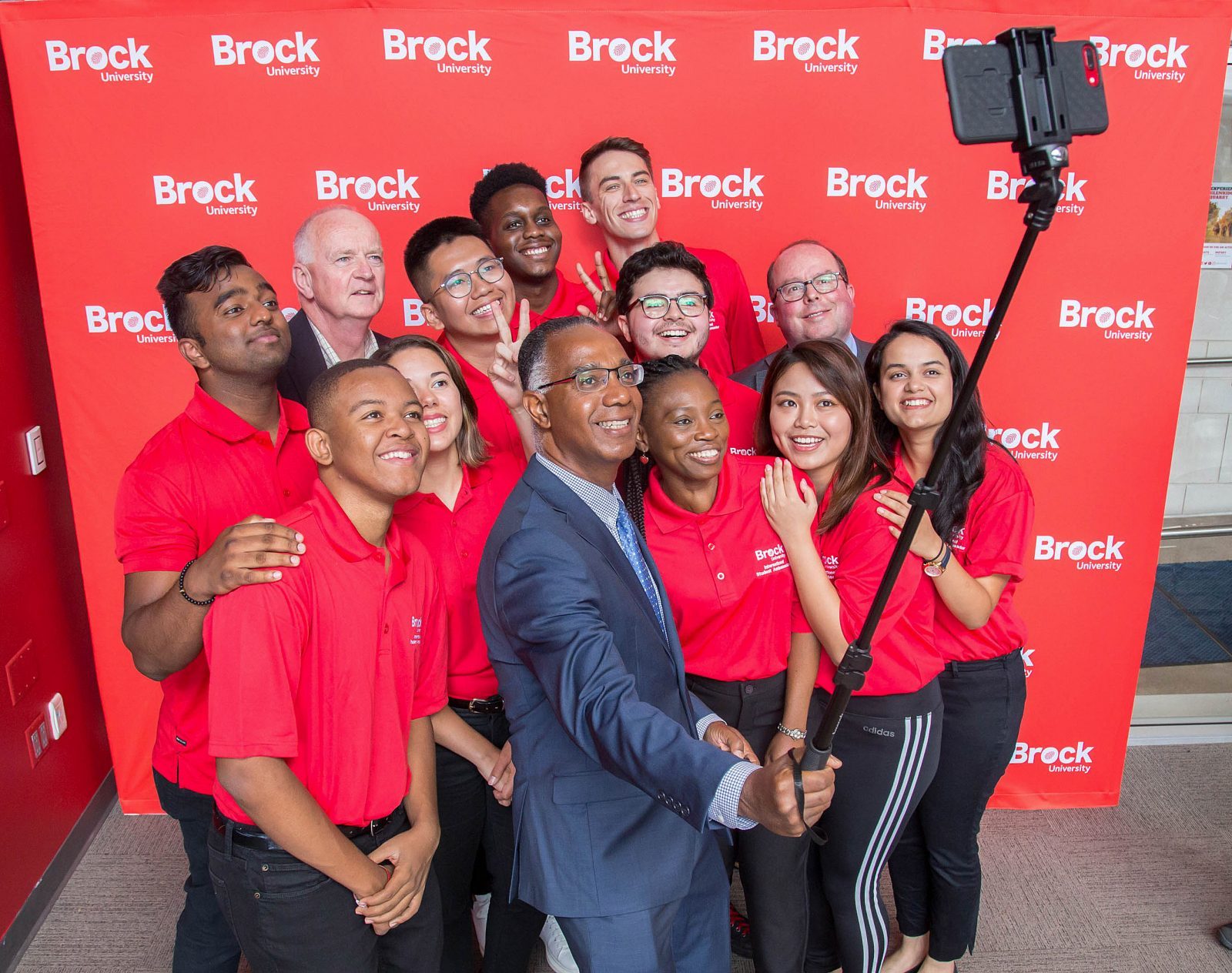 Brock President Gervan Fearon is reflecting on his time with the University, which concludes Wednesday, June 30.

While President Gervan Fearon oversaw significant changes to Brock University over his four-year tenure, some of his most impactful moments came in their simplest forms.

Chatting with faculty and staff in the morning Tim Hortons lineup. Grabbing a selfie with a thrilled graduate on the Convocation stage. Donning a smile amidst the chaos of Brock’s annual Grape Stomp, surrounded by hundreds of laughing students.

From the day he first set foot on campus, Fearon has built a reputation as the people’s President — never one to let his stature get in the way of saying “hello” and learning a name.

He would stop for a game of chess in the Brock Library, his presidential status unknown to his student competitors; regularly recognize the critical role of custodial staff, who, in addition to completing essential work, are often the first faces campus visitors see; and, when tragedy struck, he would clear his calendar to sit and cry with the parents and loved ones of students taken too soon.

Fearon’s grounded approach to leadership aligns with his philosophy on universities — that they are not only learning and research institutions, but also communities. 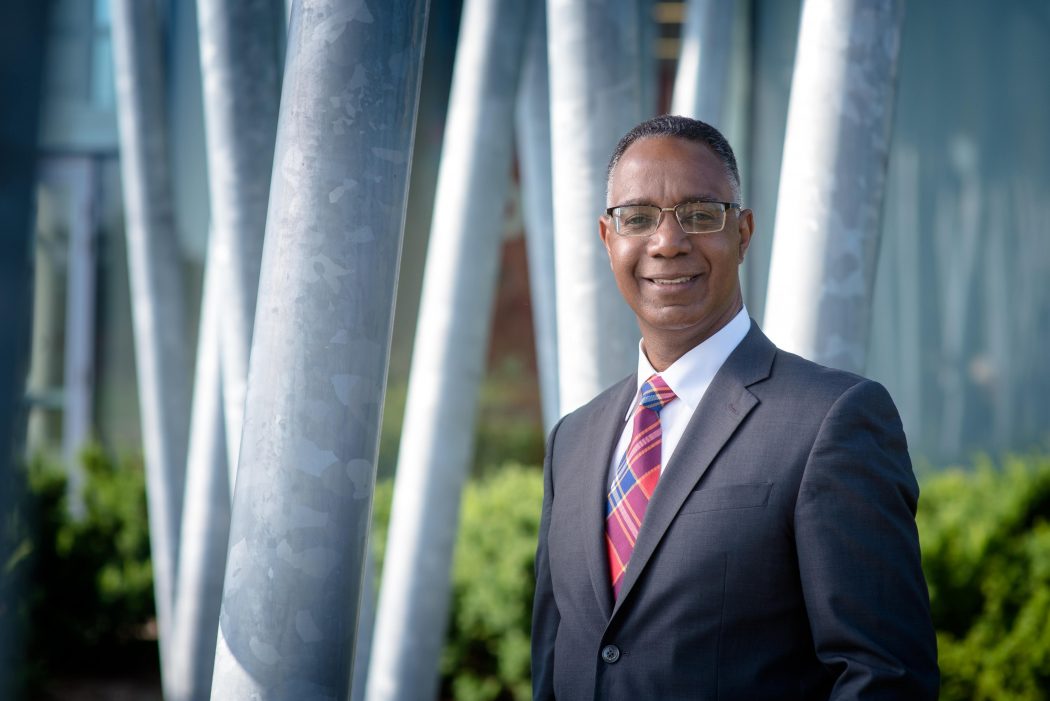 “It’s the relationships between all members of the community that make a university distinctive, make it strong and define it,” Fearon says. “It’s about what we can achieve together rather than individually. Relationships allow you to play to the strengths of everybody involved.”

Getting to know the people behind Brock’s growing momentum and learning about what the University means to them is the only way to truly know the impact your decisions may have on others, he says.

“Often as President, you’re asked to be the voice of the University and the Brock community,” Fearon says. “But if you’re not out speaking with the members of those communities, how can you effectively represent them?”

His time at Brock, which concludes Wednesday, June 30, has taught him that you can “never go wrong with consulting your colleagues and the institutional community.”

Through this team approach, Fearon has been at the helm of many successes since joining Brock in August 2017, with the University setting new enrolment records, growing research funding and enhancing its community partnerships.

He played a pivotal role in developing Brock’s Strategic Plan, the roadmap that has helped shape the institution over the past several years and will continue to lead the University into 2025, and worked behind the scenes to bring together Brock’s Board of Trustees and University Senate.

This has allowed for more cohesive decision-making, which is crucial to the effectiveness and efficiency of a post-secondary institution, Fearon says.

During his tenure, Brock also undertook capital projects, including a new student residence (Residence 8) and the revamped and expanded Zone Fitness Centre, the latter of which Fearon applauds the Brock University Students’ Union (BUSU) and the Graduate Students’ Association (GSA) for their leadership on. The University also announced it was establishing academic programming at a new Burlington campus, established its Department of Engineering, jointly created the Canada-Caribbean Institute with the University of the West Indies, and introduced the Horizon Graduate Student Scholarships, which will provide $1 million over the next 10 years to high-achieving graduate students from Black, Indigenous, People of Colour and other under-represented groups.

Numerous partnerships were also established and strengthened over Fearon’s four years at the helm, including Brock’s partnership with the Canada Games Host Society, Niagara Region, St. Catharines and Thorold that successfully resulted in the Niagara 2022 Canada Games legacy facilities being established at Brock University.

Fearon also helped to guide Brock through turbulent waters, including the reduction and freeze of provincial tuition rates and the ongoing global pandemic, both of which required the University to quickly pivot and adapt to the changing landscape.

“Despite those challenges, we’ve come through with a budget surplus each year through this period, with that money then aligned for reinvestment in priority areas for the University,” Fearon says. “That’s a testament to the collective work being done across the University.

“All the accomplishments realized during my tenure represented shared outcomes through the involvement of a team of individuals, including the Senior Administrative Council (SAC), Senate, the Board, BUSU, GSA and alumni, donor and community partners. In other words, the entire Brock University community is to be recognized. I owe them my thanks and gratitude.”

In addition to the efforts of the University community, Brock’s resilience is also due in part to the “clear sense of mission and governance established through the Strategic Plan,” Fearon says, which “served as a beacon for how we made decisions when COVID-19 arrived and the tuition freeze and cut occurred.”

Fearon says he’s proud Brock has been able to make strides in the Strategic Plan’s four key areas, including offering a transformational and accessible academic and university experience; building research capacity; enhancing the life and vitality of Niagara and beyond; and fostering a culture of inclusivity, accessibility, reconciliation and decolonization. 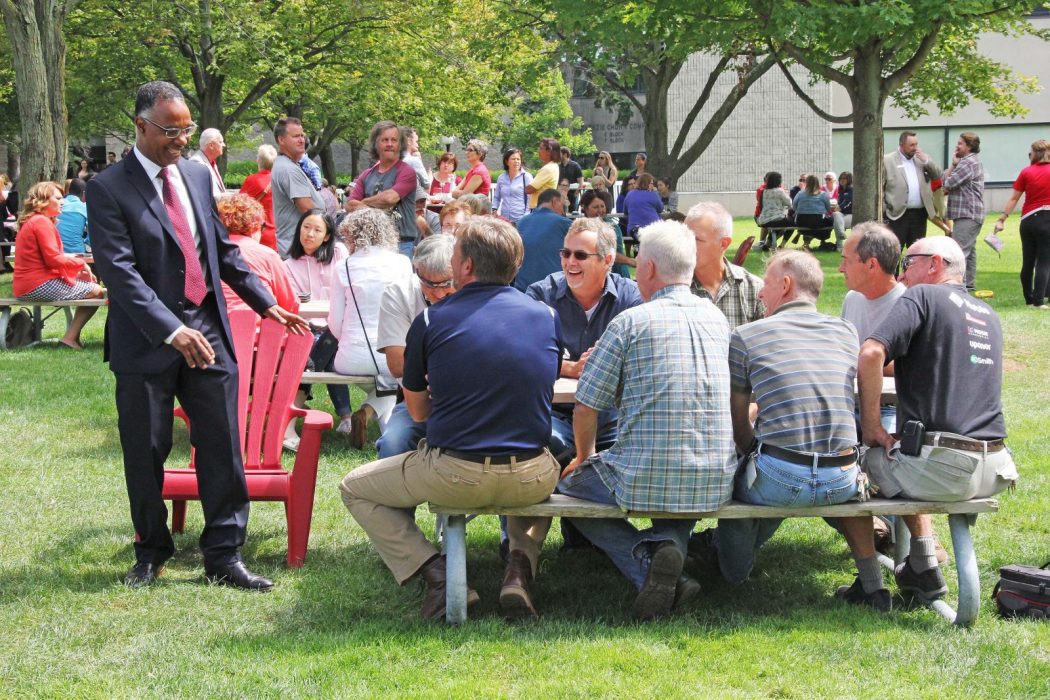 In the days prior to the COVID-19 pandemic when Brock’s main campus was bustling with activity, President Gervan Fearon could often be found interacting with faculty, staff and students at different events and throughout the University’s halls.

While they’re all key to the University’s continued success, the focus on inclusivity at Brock evokes a certain sense of pride in the outgoing leader.

“That pillar is about Brock’s institutional culture. It is not solely about what we do, but how we do it as an inclusive university,” Fearon says, adding he was pleased to see it receive unanimous approval from both Senate and the Board of Trustees.

“It has laid the groundwork for changes we’ve seen in equity and inclusion in terms of research strategy, the establishment of the Office of Human Rights and Equity, the introduction of the Vice-Provost, Indigenous Engagement, and the creation of the Horizon Scholarships,” he says. “There was innovation in adding that as a key pillar for the University.”

While Brock has taken steps forward that should be celebrated, Fearon says “progress shouldn’t be taken for granted.”

“I think progress in building inclusive societies and university communities is something that we all have a continuous role in fostering and nurturing if Canada is to realize its full potential,” he says.

Brock is an institution that faculty, staff, students and alumni should all take pride in, Fearon says, adding that he will always celebrate Brock for its contributions to post-secondary education and community engagement.

“But also remember that institutions and institutional culture are fragile,” he says. “All that good you see is because of the work you do, so don’t stop working at having an outstanding institution for the entire Brock community and at showing a spirit of generosity.”

As he readies to pass the presidential reins to Provost and Vice-President, Academic Lynn Wells, Fearon says he leaves confident the University is in good hands with an amazing team of dedicated individuals supporting Brock’s future.

The Board of Trustees has appointed Wells as Interim President for a period of up to two years while a search for a successor is completed. She will continue as Provost as well during this time.

Fearon, who begins his time as President of George Brown College in Toronto in August, says the new role will see him “continuing my passion for the transformative opportunities education holds for individuals, communities and society.”

He says he will miss many aspects of his time at Brock, and is honoured to have played a part in the University’s path forward.

“Brock is in such an incredible position in terms of momentum,” he says. “Being a part of this momentous period of growth and development for the University, as it soared to higher heights, has been an amazing experience. To the Brock community — Surgite!”

Below is a gallery of some of the highlights of Fearon’s time with Brock University.