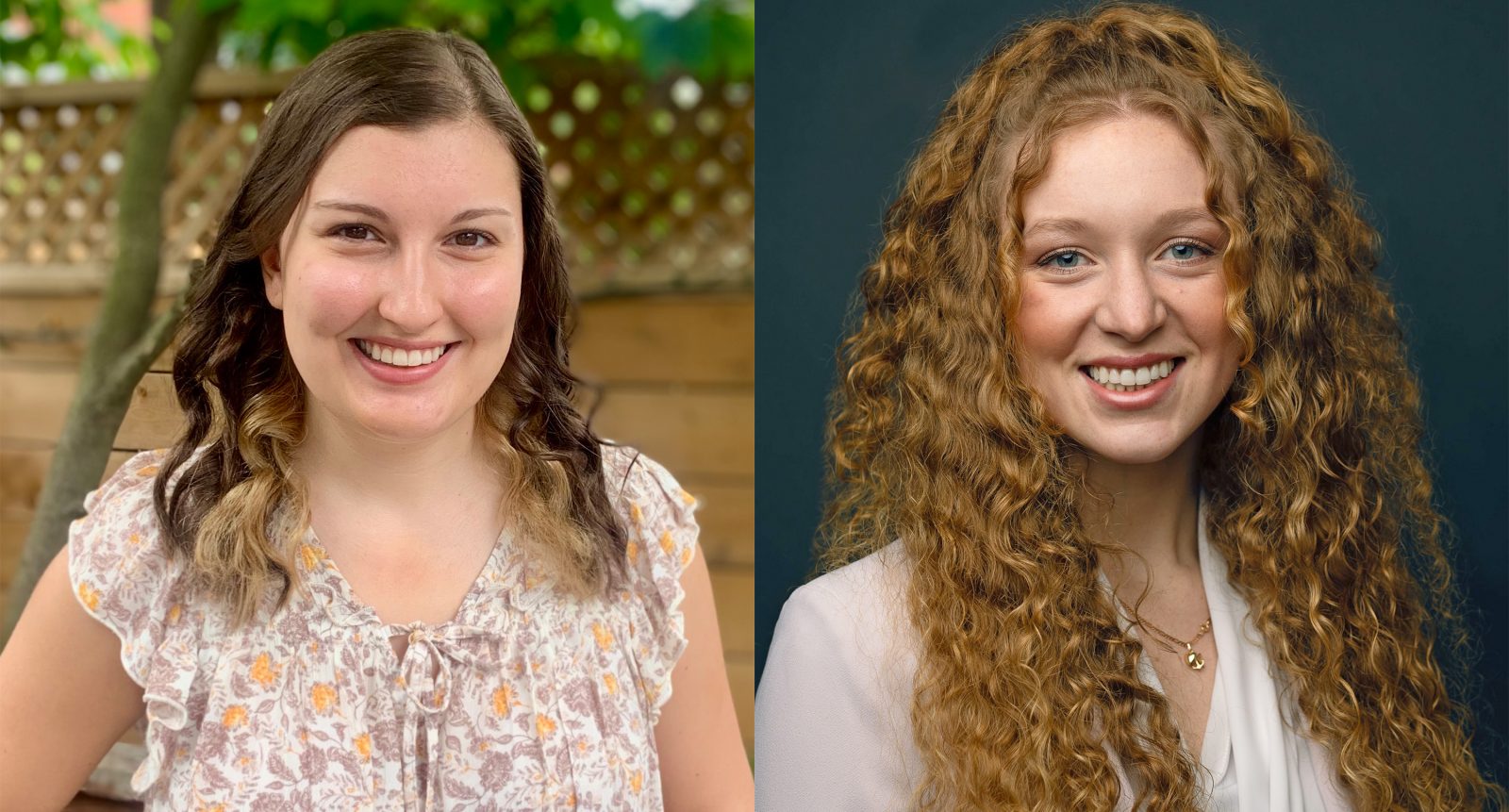 During their time at Brock, Hope Tuff-Berg (BA ’21) and Madeline Pontone (BA ’18, MA ’21) put forth extensive efforts to improve the University and wider communities.

Their involvement was recognized by the Faculty of Social Sciences during Brock’s Virtual Spring Convocation Friday, June 18, when the two graduates received the Board of Trustees Spirit of Brock medal.

Political Science major Tuff-Berg says she was “surprised and humbled” to learn about the honour.

The 22-year-old says she felt connected with the Brock community even before she began as a student thanks to the time she spent on campus while growing up in St. Catharines.

“The student culture that I experienced was inclusive, friendly and always eager to work together in classes and clubs. That gave me a true sense of belonging at school — I knew I could trust my fellow Badgers when I lost my wallet, credit card and mittens and had them all returned to me personally,” Tuff-Berg says. “Similarly, my professors were always willing to connect with me after class, and each of them was fantastic in adapting to online learning and showing that they truly cared about the well-being of their students.”

Tuff-Berg spent much of her out-of-class time at Brock volunteering. As CEO and Founder of First Vote, she hosted two conferences for Grade 12 students to learn about political processes and meet candidates in advance of a provincial and federal election. She also raised money to ensure there were no barriers to participation for high school students facing financial burdens.

She currently serves as a member of the Board of Directors for Civiconnect, a not-for-profit organization created by Political Science students to facilitate civic participation among young people, and has previously worked with the Brock Women in the House club (helping students shadow women in Parliament for a day), the Brock Niagara Rotaract Club (raising money for bursaries to assist students whose provincial funding had been cut) and the Brock Leaders Citizenship Society.

She has also worked around campus in Student Life and Community Experience, CareerZone, the Goodman School of Business and the Brock University Students’ Union (BUSU), where she served as Research and Policy Writer. Now, she will spend the summer working for Canada Service Corps at Employment and Social Development Canada as a Facilitator of the Civic Participation Pilot before starting a master’s degree in Public Policy and Administration at Carleton University next fall.

Tuff-Berg, who was the youngest speaker to present at the Niagara Leadership Summit for Women in 2018, has learned the power of using her voice, and believes students just starting out on their journey can benefit from doing the same.

“My advice for new students would be to keep an open mind and ask lots of questions, because going to university gives you the unique opportunity to learn about major issues, question what you know and debate with other students with diverse lived experience,” she says.

When Pontone began her master’s in Applied Disability Studies with a specialization in Applied Behaviour Analysis, she was already deeply familiar with the Brock community, having already completed her undergraduate degree in the Department of Child and Youth Studies.

As a student, she spent four years working with Brock International, welcoming fellow students from around the world, and two years as a Teaching Assistant in the Department of Child and Youth Studies. She also worked and volunteered around campus in the Office of the Registrar, the Special Needs Activity Program (SNAP) and as part of the Badger Brigade. She spent her free time participating in Brock Dance and other clubs and travelling on volunteer trips to support Habitat for Humanity, children’s programs and the Youth Education Series.

Pontone, who received multiple awards and scholarships for her academic work, also shared her research at conferences around North America and published her first paper as a graduate student — all while maintaining a 90-per cent average in her courses.

Outside of Brock, she has worked in the community supporting individuals with autism spectrum disorder (ASD) and brain injuries, both through her course work and as a volunteer. Much of this work has centred around the arts, including work as a Recreational Therapist at Bridges for Autism and as a Research Assistant with Pathstone Mental Health, where she helped design a dance program for clients with neurodevelopmental disorders.

Pontone says she was thrilled to receive the Spirit of Brock award.

“Brock has been my second home for close to seven years, and I couldn’t think of a better way to end my graduate studies,” says the 24-year-old from Mississauga. “It is an honour to be recognized.”

Pontone leaves Brock believing that there is great potential for growth when students open themselves up to new experiences. She says that a Brock-hosted trip to Namibia, during which she volunteered at an early intervention centre for children with disabilities, had a huge impact on her.

“This was right before beginning my graduate program in Applied Disability Studies and it really set the stage for my studies and helped me to contextualize my learning,” she says. “The staff and students I met on this trip have also become lifelong friends.”

Pontone now works as an Instructor Therapist for children and adults with ASD and has plans to become a board-certified behaviour analyst and to pursue a PhD in Applied Behaviour Analysis.

“Both Hope and Madeline are inspiring in their commitment to improving the world around them through leadership and innovation,” says Makus. “Many in the community have already benefitted from their courage and their eagerness to turn theory into practice. On behalf of the Faculty, I offer them both my thanks for all their hard work and service and congratulations on their many achievements.”