Canada Games Park is taking shape at the corner of Merrittville Highway and Sir Isaac Brock Way at Brock University.

In less than 18 months, what was once a vision has now quickly taken shape at the corner of Sir Isaac Brock Way and Merrittville Highway in Thorold.

Unrecognizable from the days when it was just a parking lot at Brock University, Canada Games Park (CGP) is rapidly transforming into the state-of-the-art sport and recreation complex that was promised. Being built as a result of Niagara hosting the 2022 Canada Summer Games, this new facility is well on its way to being completed by the end of this calendar year — an impressive feat given the challenges the project has faced over the past year as a result of the COVID-19 pandemic.

It was roughly 12 months ago the site was forced to close down for about four weeks due to a mandated government shutdown. Since then, despite material shortages and other obstacles created by these unprecedented times, the team working on CGP has stayed on schedule with substantial completion expected by Fall 2021, and construction activities set to be fully completed by the end of January 2022. 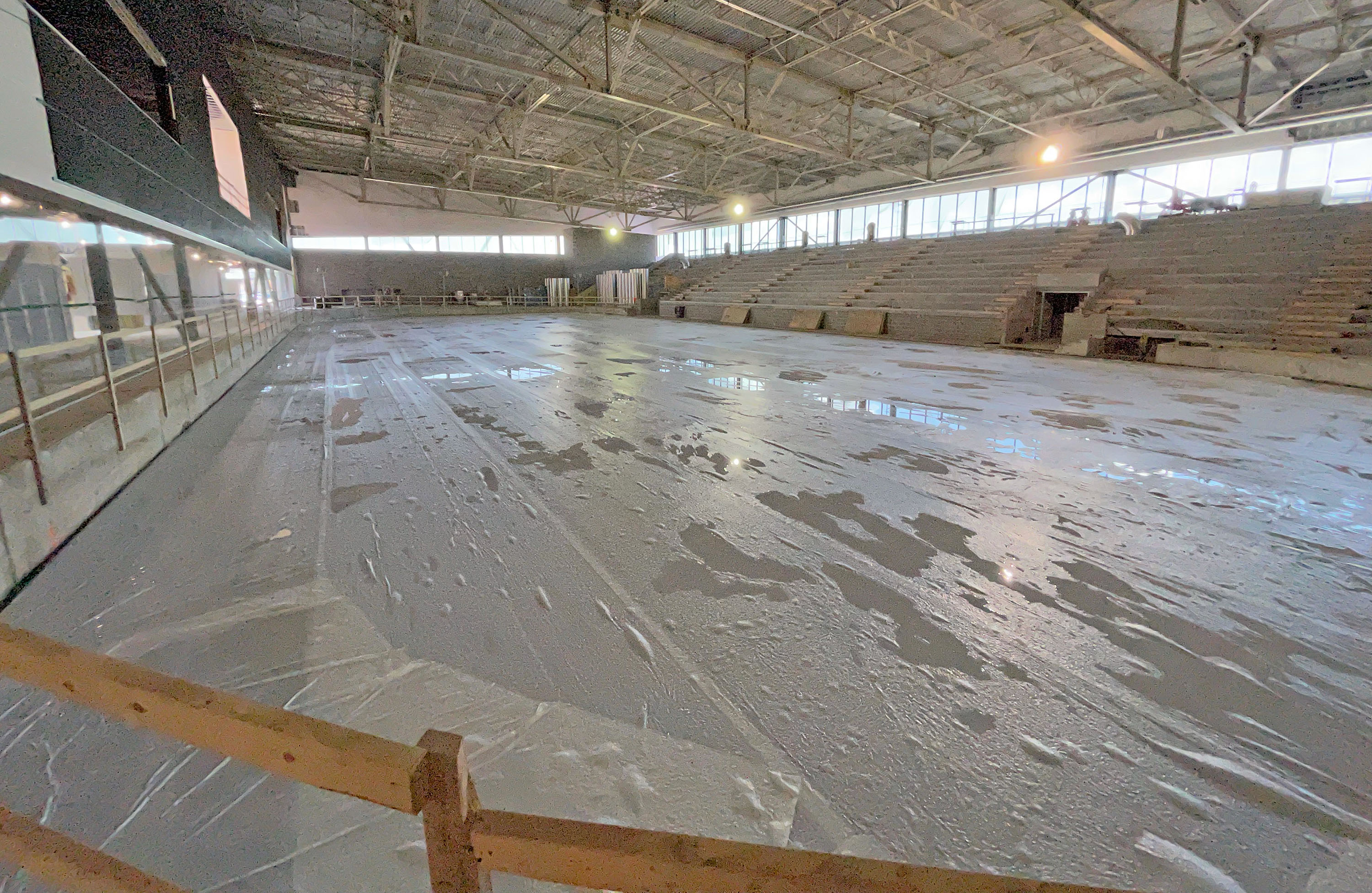 One of the two rinks contained within Canada Games Park is shown shortly after the rink slabs were poured recently. Photo credit: Urban and Environmental Management.

“COVID-19 has certainly been an unexpected challenge and a hurdle we’ve all had to deal with,” said Emilio Raimondo, President of Raimondo + Associates, a Niagara Falls architecture and interior design firm which has teamed up with MacLennan Jaunkalns Miller Architects (MJMA) to design CGP and the Henley Rowing Centre. “However, with the experience and know-how of Aquicon, the general contractor on the project, they’ve been able to maintain and make up ground, and to all of our surprises, they’ve certainly been able to meet the original schedule.”

In the early goings of this project, starting in December 2019 when the shovels went into the ground, a lot of the heavy lifting being done on site was accomplished by Peters Construction Group. They focused on the storm sewers, sanitary water mains, the parking lot, and built all of the major earthworks at CGP, while also completing the excavating for the sub trades (such as plumbers and electricians), digging the foundations, backfilling, and doing the aggregate hauling for the entire project site.

All of this was in addition to the work they completed at the south entrance of the facility, along Schmon Parkway, where they upgraded the sanitary and water lines — a necessary improvement that will allow CGP to be fully operational once it opens and begins to see community use in 2022.

“It’s just very exciting to be a part of a project like Canada Games Park,” said Darren Peters, President of Peters Excavating, which is part of Peters Construction Group. “We’ve worked on a lot of interesting projects, but nothing as high-profile. It’s kind of a flagship project, and to be a part of it, having our name associated with it, is pretty special. “The whole facility is amazing. You see the sports field. I haven’t been inside the arena, as of late, but just the detail of the architecture of the entire park is just so impressive.”

Eric D’Uva, a Project Engineer at Urban and Environmental Management, a Niagara Falls consulting firm that serves as the project managers for CGP, said “There’s no appreciation of the scale of this facility through any photo or video.”

“The sheer size of it, it just can’t be captured through a photo. I mean, yes, it looks big in photos, but actually going in there and walking from one space to the other, and realizing just how big this building actually is, is always impressive,” he said. 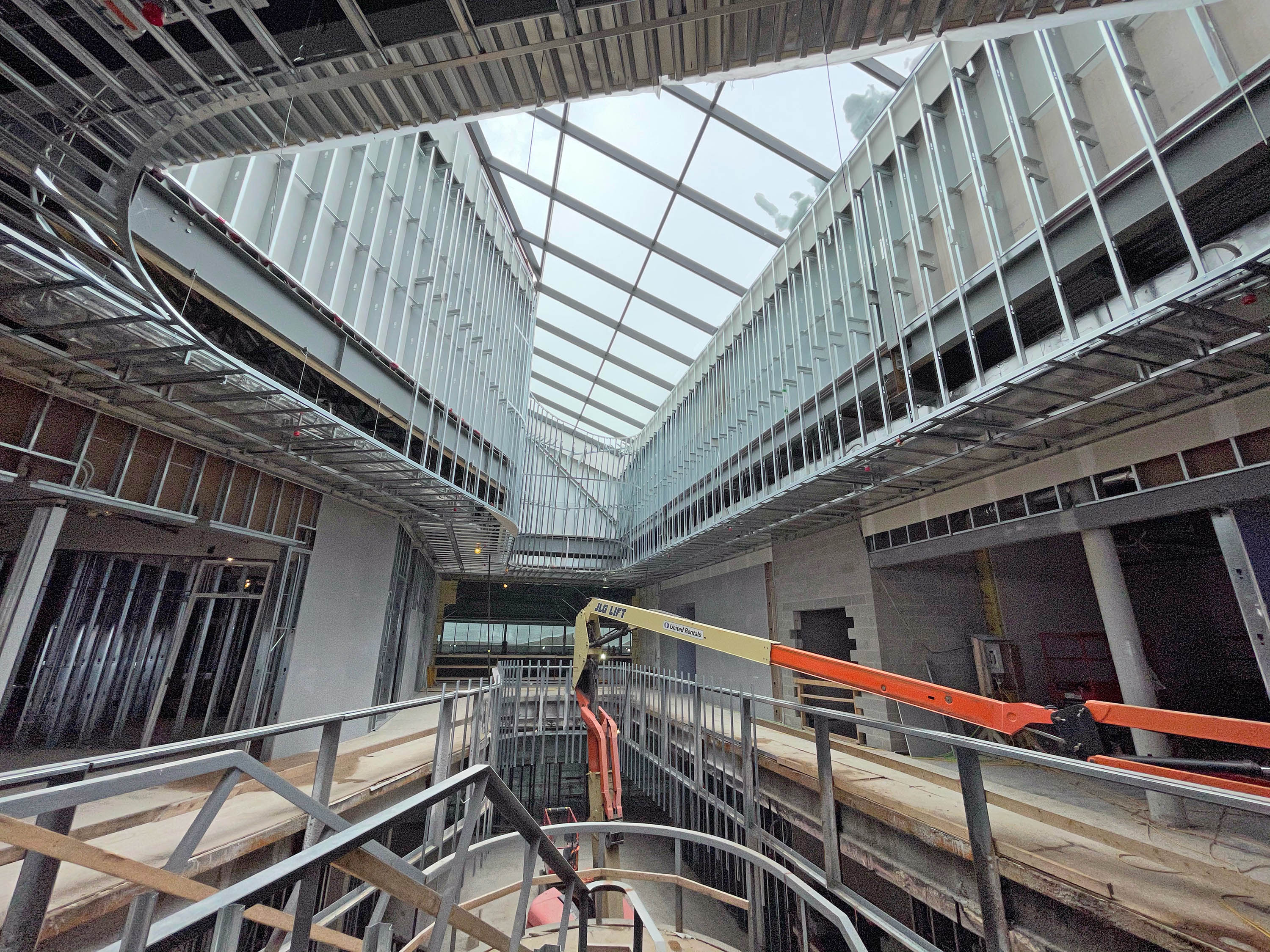 The staircase to the second floor of the Sport and Ability Centre at Canada Games Park. Photo credit: Urban and Environmental Management.

Canada Games Park features two main areas. The first is the main building known as the Sport and Ability Centre. The 200,000-square-foot facility will consist of a twin ice-pad arena, a health and well-being centre, a 200-metre indoor track, sport offices and a multipurpose field house that will feature a parasport gymnasium.

Outside that facility will be the second main space, which includes six competition beach volleyball courts, a cycling centre, and a track-and-field facility including a full 400-metre track.

“The track is an absolute marvel. It’s designed and built to Olympic standards,” said Raimondo. “It’s just amazing what has been provided, and how these facilities can be used in the future.”

With the building now enclosed, much of the progress is taking place inside the facility. Aquicon has continued to make major strides from week to week, most recently completing installation of glass in windows, doors, or other fixed openings (known as glazing). Nearly all internal drywall has also been installed and the the rink slabs were poured.

CGP’s design also places a significant importance on both accessibility and environmental sustainability. The roof, for example, has overhangs extending to reduce the solar gains and associated cooling load, but the folded roofscape across the top of the building will also allow for the deployment of a green roof. This sustainable feature will provide shade, remove heat from the air and lower the temperature of the roof’s surface and surrounding air — all in an effort to reduce the heat island of the building.

Additionally, CGP has been designed to be fully accessible with elevators, ramps, door operators and/or sliding doors at the main entrances of the Sport and Ability Centre, and the Park will feature double the number of required barrier-free parking spaces. Inside the building, a gymnasium will be housed within the multipurpose fieldhouse to accommodate parasports and address the need for more accessible sport facilities in Niagara and its relatively large para-population.

Prior to the community collecting significant mileage at CGP, the Niagara 2022 Canada Summer Games will take it out for its first real test drive next summer, which will be an event that the team who has worked tirelessly to bring this project to life is eager to experience.

“Seeing it constructed since day one, knowing all of the hurdles and challenges that we’ve faced, it’s going to be very rewarding to see those athletes performing on what was a dirt field and know that we met those schedule challenges and all the construction issues that we faced,” said D’Uva.

Peters called the facility “an asset for us for years to come.”

“Even after the Canada Games comes and goes, we still have this state-of-the-art facility for the community to use for many years, and for other functions to come,” he said.

From August 6 to 21, 2022, five of the Niagara 2022 Canada Summer Games’ sports (athletics, box lacrosse, wrestling, beach volleyball, and indoor volleyball) will be held at CGP, including the first women’s lacrosse competition to ever be held at a Canada Games.

Made possible thanks to funding by the Government of Canada, the Government of Ontario, and the project’s consortium partners including the Niagara Region, City of Thorold, City of St. Catharines and Brock University, CGP is going to change the landscape of available sport and recreation facilities for Niagara residents of all ages and abilities to enjoy for years to come. It will also further strengthen the region’s sport system by creating and improving access to critical amenities and programs — ultimately facilitating the creation of year-round hubs of community activity.

NOTE: This story was written by Christopher Séguin, Manager of Media and Communications for the Niagara 2022 Canada Games.