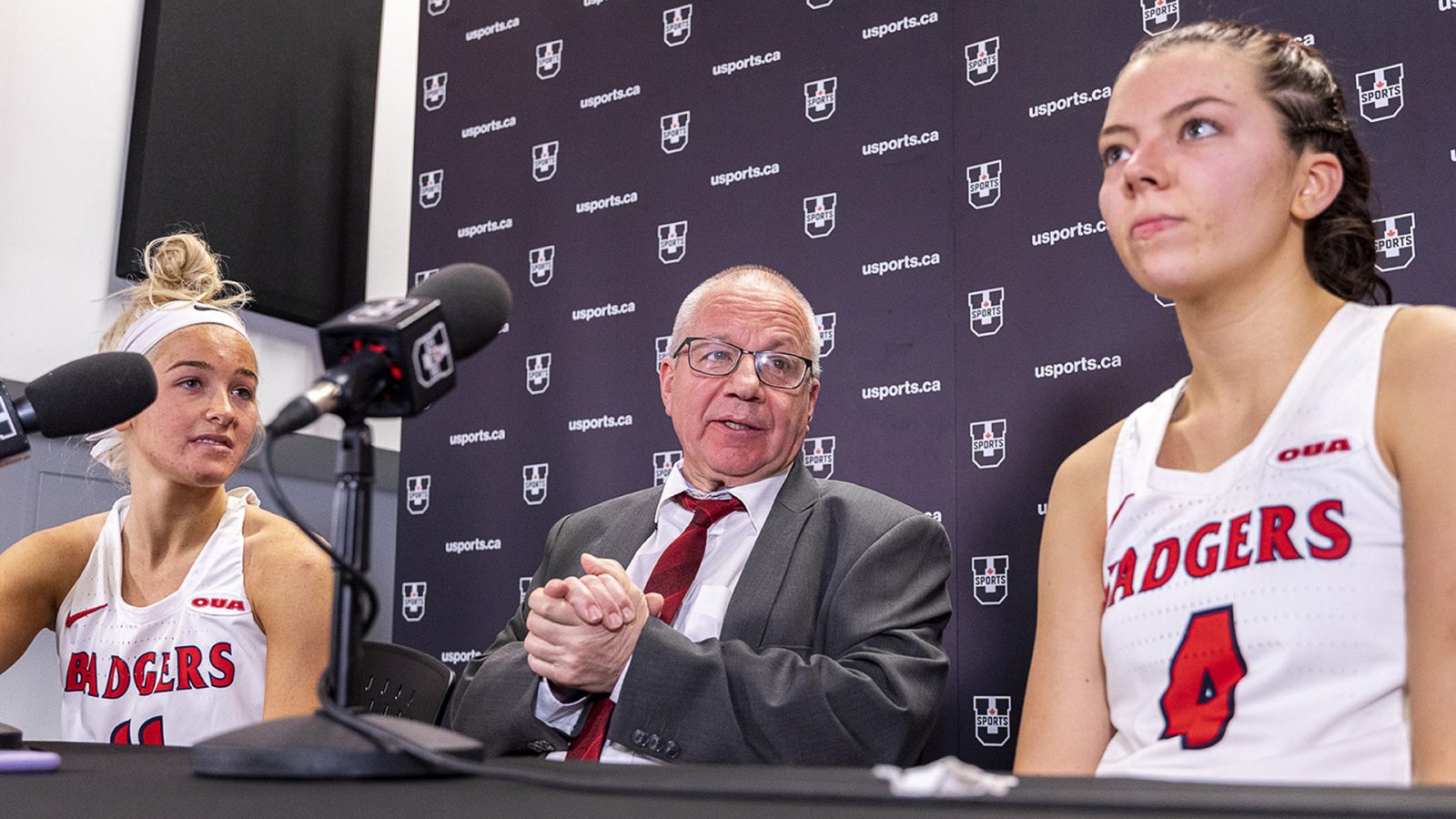 A respected trio of Brock Badgers received athletic awards from the City of St. Catharines on Wednesday, April 14.

The awards are a nod to the Badgers’ prolific playoff run to the U SPORTS Women’s Basketball gold medal game in Ottawa during March 2020.

“We strive to be part of the community, so we’re grateful to the City of St. Catharines for recognizing a proud Brock moment,” said Emily Allan, Interim Director, Brock Sports.

Rao guided the Badgers to a 17-5 record, including their first OUA Critelli Cup title since 1983 and first appearance at the national championships since 2001-02. 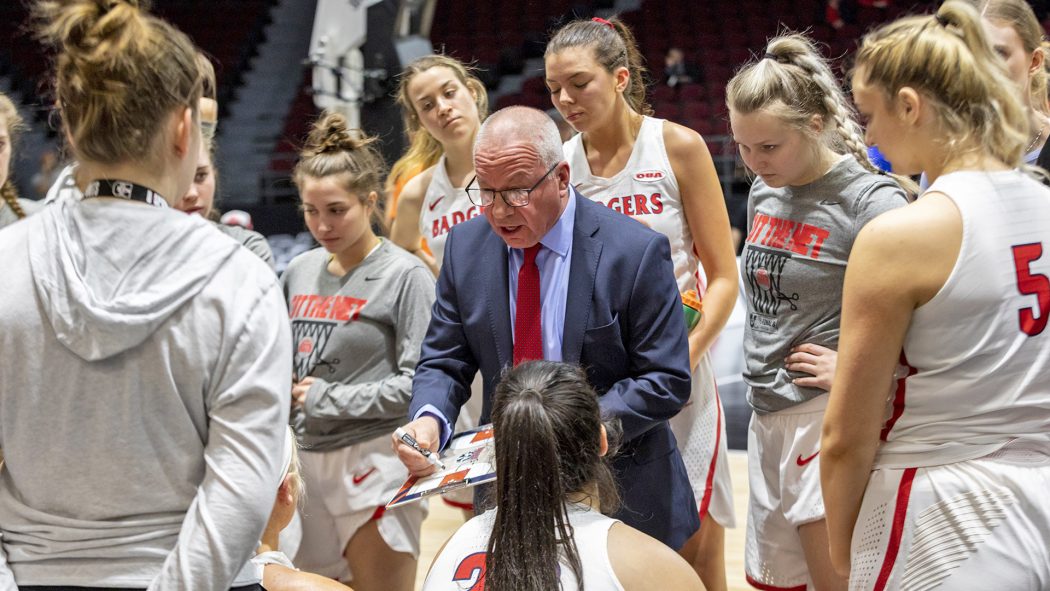 Rao, Tatti and Keltos brought home a national silver medal for their efforts as the Badgers were also named OUA Team of the Year.

Despite all of the accolades, Rao was bewildered when he received a phone call informing him that he was receiving the St. Catharines Sportsperson of the Year award.

“I was surprised. I’m honoured, but I’m happier for Sam and Melissa,” said Rao. “Sam is a great player, smart and a model student-athlete, and we refer to Melissa as the Greatest of All Time. She’s the GOAT. Tatti is exceptional.”

In her final year as a Badger, Tatti was named the 2019-20 OUA Player of the Year, a U SPORTS First Team All-Canadian and OUA First-Team All-Star.

She holds the Brock record for most points in a single season with a total of 407 in 21 games during the 2019-20 campaign. She led the league with 18.6 points per game.

“It’s a pretty amazing accomplishment to win this award. The list of athletes who have won it over the years is incredible, most of them are Olympians and professional athletes, so it’s such an honour to earn the title of St. Catharines Athlete of the Year,” said Tatti. “It’s special to win this award alongside Sam because we wouldn’t have been the team we were without her. We wouldn’t have won as many games as we did, and I wouldn’t have received all those awards that season without her, Rao and the rest of the squad. She was my partner in crime on the court.” 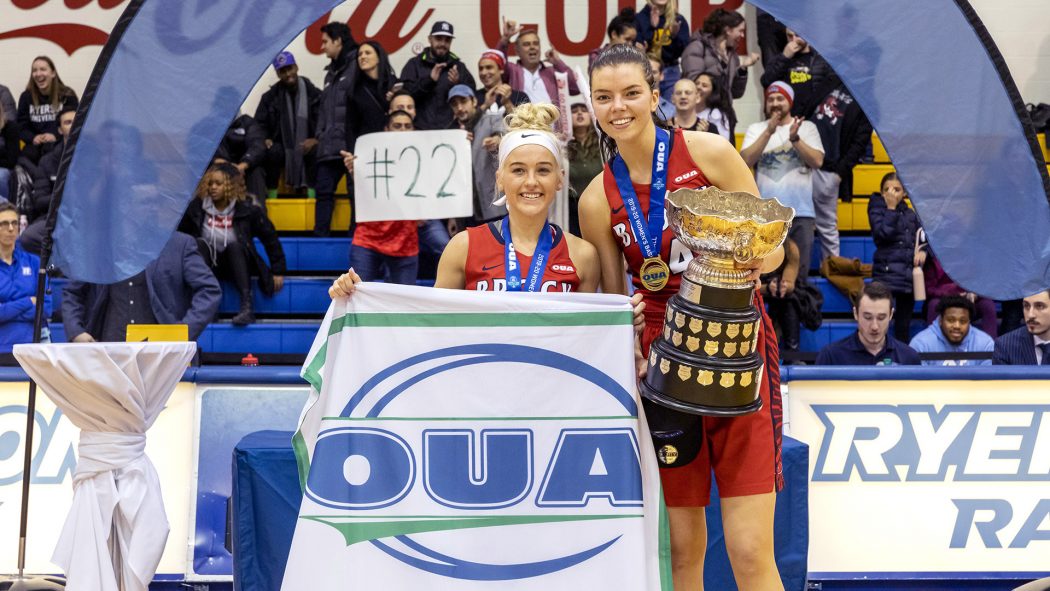 Melissa Tatti holds the 2019-20 OUA Women’s Basketball championship banner alongside Samantha Keltos with the Critelli Cup after defeating the Ryerson Rams at Coca-Cola Court in Toronto on Feb. 29, 2020. Tatti and Keltos were named co-Athletes of the Year by the City of St. Catharines.

In her first season with Brock, Keltos finished second on the team with 15.4 points per game, while also leading with eight rebounds per game and two blocks per game.

At U SPORTS, Keltos was named Player of the Match for three consecutive games.

“Being recognized for our success last year pretty special,” said Keltos. “It means a lot to be among the top athletes for the city, and to be able to share it with Tatti means a lot more.”

Keltos set a team record for blocks in a single game with nine against York on Jan. 29, 2020.

She saved her best performance for the Critelli Cup Final against the Ryerson Rams on Saturday, Feb. 29. Keltos posted a game-changing 42 points to lift the Badgers over the Rams as one of the all-time great championship performances to lead her team to victory and their first provincial title since 1983. She added 12 rebounds for her seventh career double-double, including three steals and a pair of assists.

Keltos, a Biological Sciences student who has two years of eligibility remaining, and the Badgers are looking to sustain what they accomplished before the COVID-19 pandemic.

“Thinking about our playoff run doesn’t seem real. I still can’t believe we made it as far as we did. We were true underdogs the whole tournament and at U SPORTS Nationals,” said Keltos. “When we returned from Ottawa, the world shut down. I’m a little jealous of Tatti because her university career ended on a high note and right before lockdown. Now, I’m just waiting to see what will happen next season, and I hope to play again.”