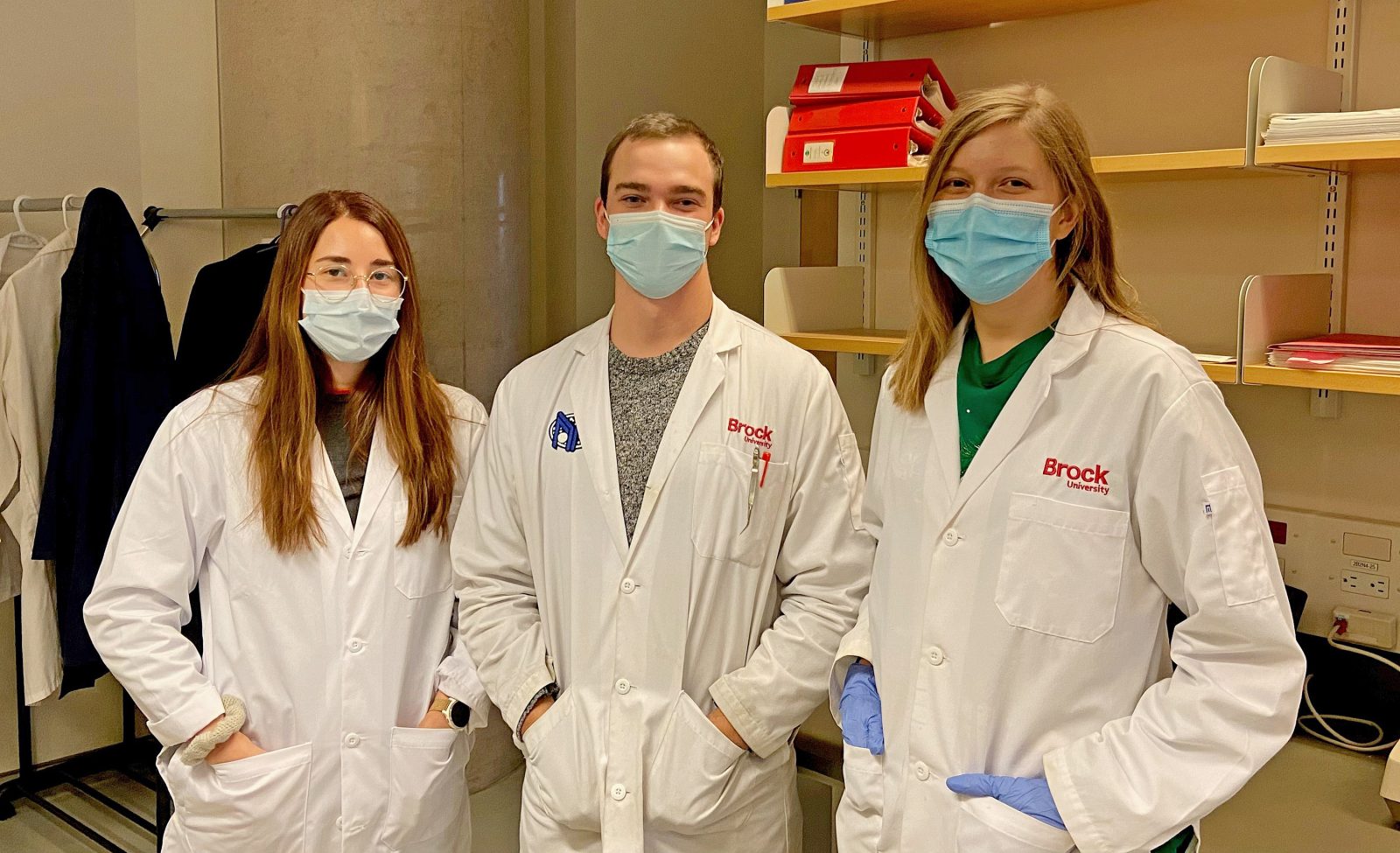 From left, Katrina Carbonara, Robert Crozier and Sophie Hamstra all met the rigorous requirements to fast-track into Brock’s PhD in Applied Health Sciences.

Faculty of Applied Health Sciences students Katrina Carbonara, Robert Crozier and Sophie Hamstra all met the requirements. In September, they began the first year of their PhD programs without formal completion of a master’s degree.

To qualify, the three had to complete all required master’s coursework with an average of 90 per cent or higher, have demonstrable research experience, successfully defend their master’s research proposal, and show clear promise to undertake and complete a doctoral degree.

Jens Coorssen, Professor of Health Sciences and Biology, and supervisor of Carbonara, said all three students have gone above and beyond to prove themselves in the first year of their program.

“These are the types of students that I am certain have a future in research, should they choose it,” he said. “They are the future colleagues we want down the hall 10 years from now.”

“When I began university, my goal was to become a medical doctor,” Hamstra said. “But then I did a fourth-year thesis with my supervisor, Dr. Val Fajardo, and enjoyed the work so much that I knew I wanted to continue in research. I now work in his lab, studying proteins that regulate muscle contraction and relaxation in the heart by manipulating cellular calcium concentrations.”

Hamstra said she has been given many opportunities during her time at Brock.

“I have been able to attend conferences and network with researchers from around the world,” she said. “There are so many opportunities for collaboration in this field, and I am excited to continue exploring my topic and provide more insight into diseases like cardiomyopathy, which if left untreated, can lead to heart failure.”

Carbonara was also pulled into research when she met Coorssen.

“I took Dr. Coorssen’s class, Biomarkers and Disease Processes, during my fourth year of undergraduate studies, and instantly became intrigued by the field of biomarker research,” she said. “When he said I should consider graduate studies under his supervision, I was blown away and didn’t want to pass up the opportunity to study with such an accomplished researcher.”

Carbonara is now studying with Coorssen and looking at identifying mothers at risk of preterm labour.

“More than 15 million babies worldwide are born prematurely every year and the cause is unknown,” she said. “It is the leading cause of death in children under the age of five and many survivors are faced with life-long health risks or cognitive defects.”

By analyzing blood samples taken from mothers early in their pregnancy, Carbonara hopes to identify critical protein biomarkers in mothers at risk of experiencing spontaneous pre-term labour versus those who have had a normal delivery. A panel of these markers can then be used to generate a simple, readily-accessible clinical test enabling accurate, early identification of women at risk as well as aid in the discovery of potential new therapeutic targets.

Crozier was, similarly, motivated to continue researching by his mentorship relationship with his supervisor, Associate Professor of Health Sciences Adam MacNeil.

“I was interested in research early on in my undergraduate career,” he said. “I always enjoyed the lab work aspect of courses offered within the department. I began thinking about continuing my education and pursuing a career in research and academia when I met my supervisor, Dr. MacNeil, and saw how he was influencing students. I have been so impacted by his guidance and mentorship and I hope to be able to provide that for students one day.”

With MacNeil, Crozier is studying immune cells, otherwise known as mast cells. Crozier said these cells play a central role in protecting us against various infections caused by bacteria, viruses and parasites. However, mast cells can also be activated by non-harmful environmental substances known as allergens, that include things such as pollen or a peanut, which ultimately initiate what is commonly referred to as an allergic reaction.

“My PhD research is focused on expanding previous work done by our lab which found that rosemary extract, an alcohol extract of the common herb rosemary, significantly reduces the production and release of various proteins from mast cells that are responsible for promoting tissue inflammation,” Crozier said.

Although still in the very early stages, he hopes this research will one day provide fundamental evidence to screen and potentially develop novel plant-derived anti-allergy therapeutics to combat the ever-growing allergy epidemic, which now impacts more than 40 per cent of Canadian children.

Dean of Graduate Studies, Suzanne Curtin, offered her congratulations to the trio.

“The accelerated program is a notable variant on the graduate degree pathway,” she said. “While allowing programs to recognize excellence in their students, it also helps to pave the way for rethinking traditional approaches to entering a PhD program.”