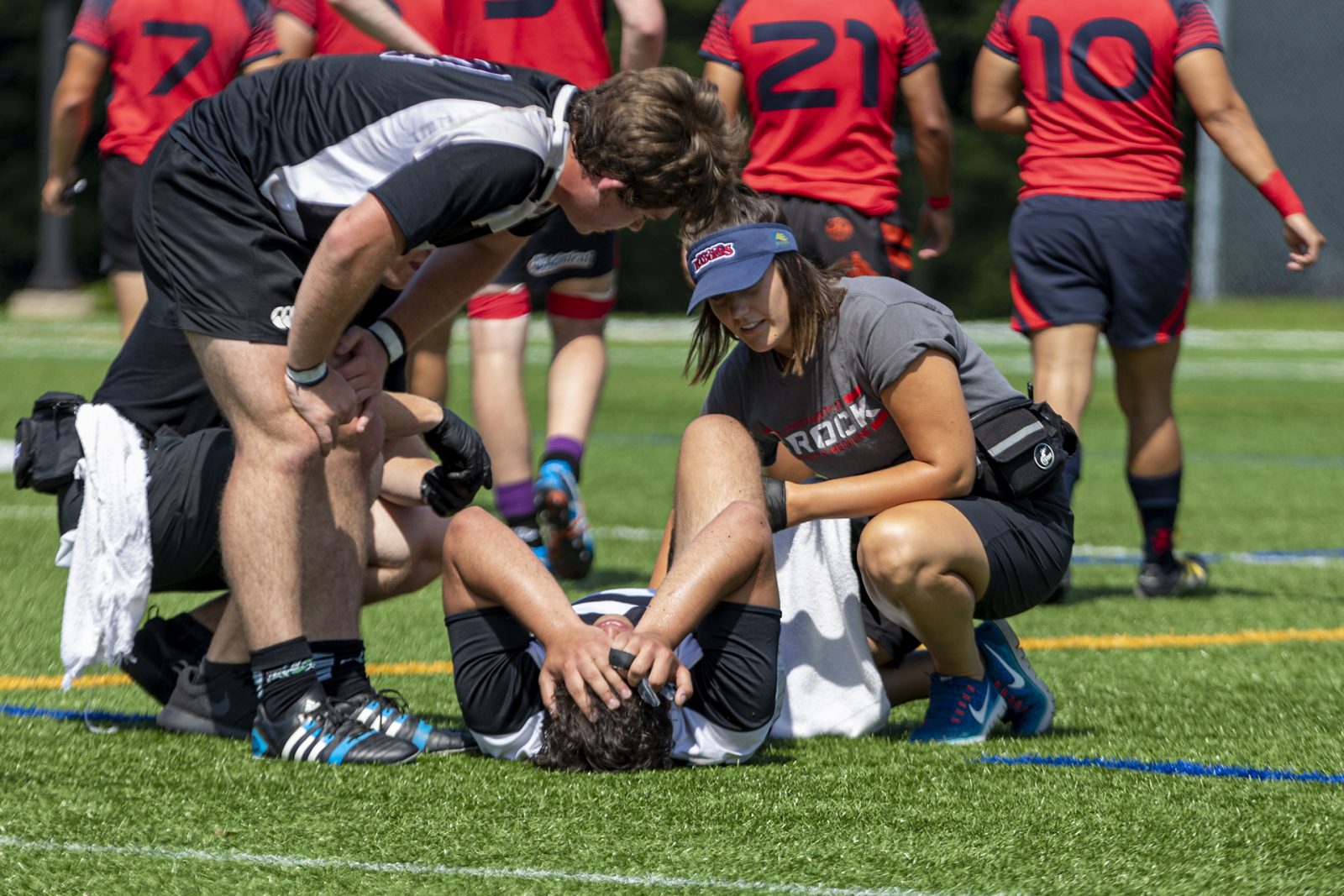 Kelsey Marshall, an athletic therapist with Brock Sports Medicine Clinic, attends to an injured rugby player during a game at Brock Alumni Field in 2019.

It may sound cliché, but a positive attitude and strong work ethic can be two of the most powerful tools in your tool belt.

It’s a mantra Kelsey Marshall has used to guide her career path as she gains work experience as an athletic therapist with some of Canada’s top sports organizations, such as Hockey Canada, the Canadian Football League (CFL), Rugby Canada, National Lacrosse League and Bobsleigh Canada Skeleton.

“Kelsey is one of the best up and coming therapists in Canada,” said Steve Lidstone, Associate Director, Sports Performance and Sports Medicine. “She’s not only working at the university level, but also with national sport and professional sport. Kelsey is highly touted and is consistently offered positions for some of our top Canadian national teams.”

Marshall recently added pro basketball to her resume during the COVID-19 pandemic.

She helped the Canadian Elite Basketball League (CEBL) become the first North American pro league to safely return to play and worked directly with her hometown team, the Edmonton Stingers, during their Summer Series Championship run at the Meridian Centre in August.

Although she worked exclusively with Edmonton, Marshall unofficially became part of the host medical team and advised on safety protocols and assisted with emergency action plans within the CEBL’s safety-designed bubble.

At Brock, one of Marshall’s projects came to fruition last week as she spearheaded Brock Sports’ Women in Sport Group, with the goal of elevating female athletes and staff on the athletics landscape. Their well-attended inaugural meeting was held virtually on Sept. 23.

“Imagine coming in and filling in for the legendary Joe Kenny,” said Lidstone. “Those are big shoes to fill, but she impressed throughout the interview process and earned the position through a panel-based interview. Kelsey brought a different approach, which helped us reshape how we were training our student therapists.”

She enjoys playing a role in the BSM student curriculum program, whether it’s teaching the proper way to assess and tape an injury or rehabilitate and return to an injured athlete to compete for Brock.

“It’s important to me to see individuals grow outside of sport,” said Marshall. “The BSM program is important to me as I get to help play a small part in our undergraduate students’ futures. I want to support them while pushing them to dream bigger for themselves and what they can accomplish.”

Lidstone said one of Marshall’s inherent strengths as an athletic therapist is her connection with athletes.

Marshall’s affinity for sports started as youngster while growing up around the CFL. Her dad, Greg Marshall, was a coach in the CFL and is currently the head coach of the University of Toronto football program.

The family moved a few times during her childhood from Ottawa to Saskatchewan and eventually to Alberta where she graduated from high school.

“I knew after high school I wanted to continue to be around that environment,” she said. “I grew up playing sports, mostly basketball, and basically spent my childhood at the field and in a CFL locker room. Sports is a world where we can help people achieve their goals and be a part of what they are so passionate about.”

“That’s when I had my ‘ah-ha!’ moment of knowing this is exactly what I wanted to do,” said Marshall, receiving her first contract as a certified athletic therapist with the Marauders.

She absorbed Puskas’ knowledge of quick-thinking on-field emergency care and understood the benefits of hard work.

Marshall gained the opportunity to work with Hockey Canada after following Lidstone’s guidance and advice when it comes to national sport organizations.

“He said, ‘Go to everything. Make personal connections. You never know where it will get you,’” said Marshall.

She took part in every opportunity that came her way, which ultimately led her to being selected as the lead therapist for the National Women’s Development team competing for the 2018 Nations Cup in Germany.

“I can still remember being on the bench, wearing the hockey Canada logo on my chest and hearing the national anthem play,” said Marshall. “It’s the most patriotic I’ve ever felt. This profession is so fulfilling to me. It’s pushed me to be better and to dream big.”