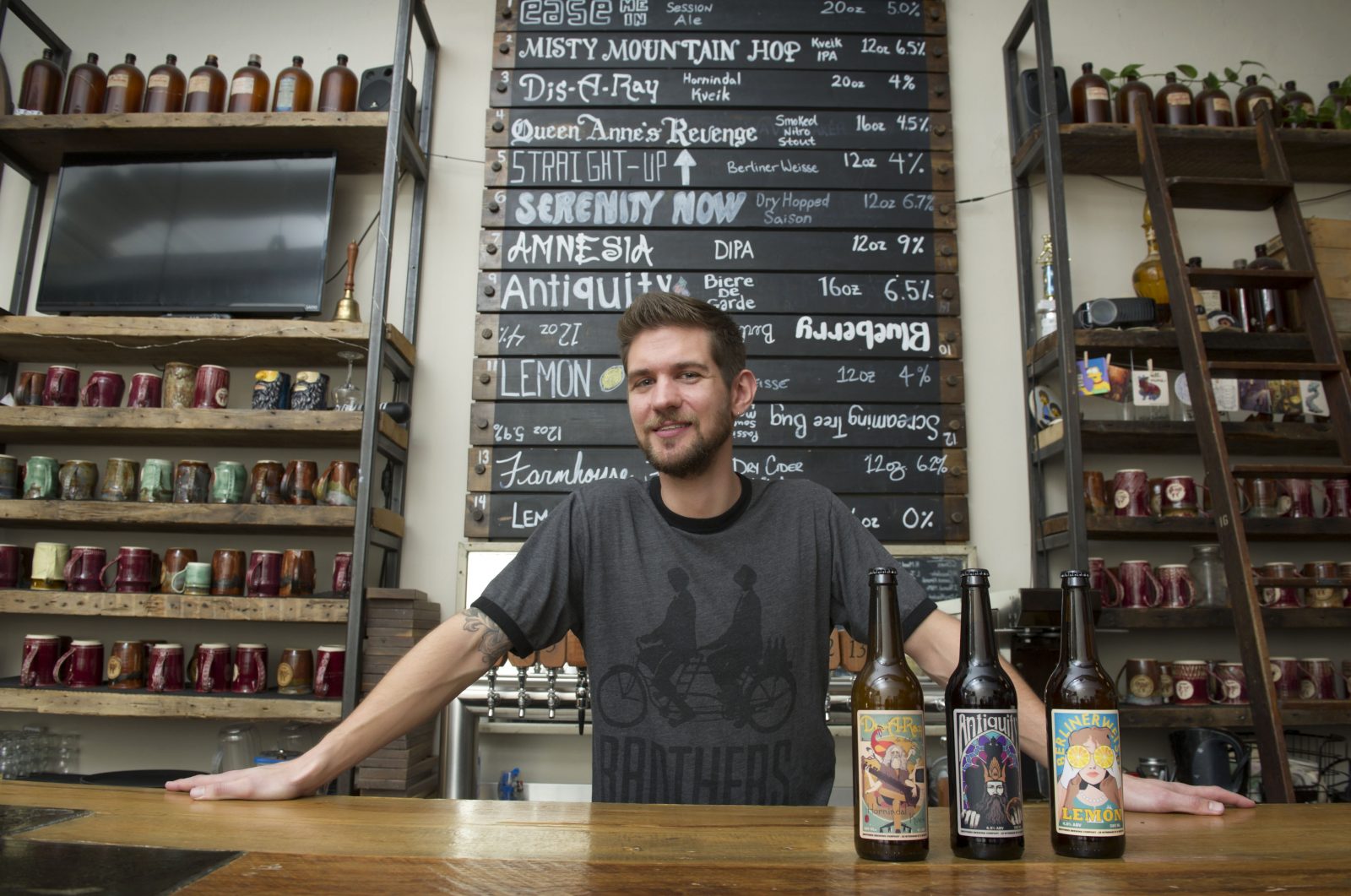 Goodman School of Business graduate Colton Proveau (BBA ’19) is applying his knowledge from his entrepreneurship degree by opening Brothers Brewing in Guelph.

Note: This story originally appeared in the Winter 2020 issue of the Goodman School of Business’ alumni magazine Goodman: The Magazine prior to the COVID-19 pandemic.

Brock graduates are proving that it’s not just water, malt, hops and yeast that make tall, cold ones. A degree from the Goodman School of Business is an essential ingredient, too.

In the past few years, some Goodman alumni have used their business degrees to forge their path in Ontario’s booming craft beer industry, trading corporate offices for brew houses.

The secret to their success goes beyond their abilities to brew some of the best beer in the province. They have the skills to write and execute a sound business plan, manage staff, sell a product in a competitive marketplace, balance books and satisfy their entrepreneurial spirit.

Niagara native Colton Proveau and his twin brother Asa started brewing their own beer and bringing it to parties. Come time to apply for post-secondary education, they knew they wanted to open their own brewery instead of chasing their original career ambitions.

Proveau applied to Brock for Business while his brother went to Niagara College for its highly competitive brewmaster program. When school began for Proveau in September 2011, it didn’t take long to realize his career goals were different than his classmates’.

“A lot of people just kind of thought it was a joke,” he recalled. “Being that craft beer hadn’t really exploded here yet, it was, ‘Oh yeah, cool, go for it,’ but they didn’t think it would materialize.”

Every project Proveau did at Brock was about the brewing industry. In 2014, with two years left before graduating from the entrepreneurship stream, he and Asa launched Brothers Brewing Co., making beer at Niagara College and slowly but steadily building their brand.

Simultaneously launching a business and attending university meant finishing his schooling later than those Proveau started with in 2011. But two years ago, he and Asa opened the watering hole of their dreams in Guelph, creating a place where people could have a pint and bite while seated alongside the brewing equipment.

The brothers tapped into resources, including the Goodman Group’s Kickstarting Entrepreneurship program, for a small grant and advisory help when launching. Now Brothers Brewing is a known entity in Ontario’s vibrant craft beer scene — a perk of which has been collaborating with other Goodman grads in the business, including Scott Pautler (BAcc ’11) at Wave Maker Craft Brewing & Distillery in Cambridge. 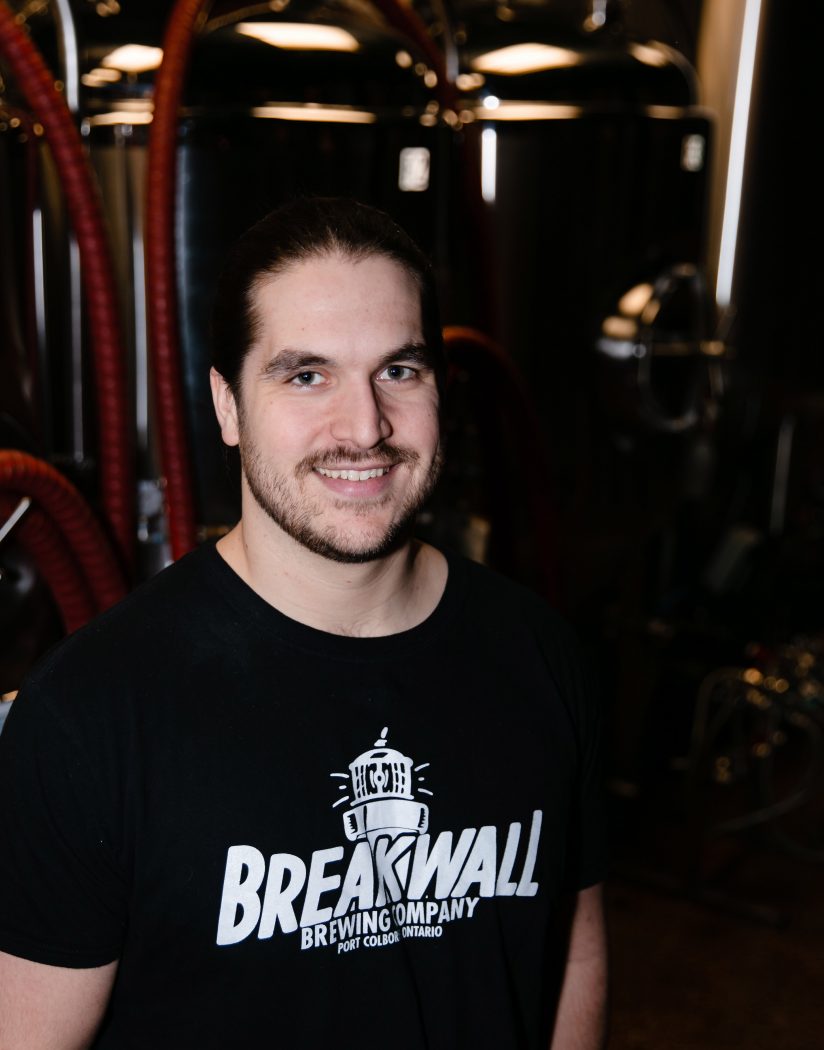 “It’s not very glamorous, but it’s part of the business,” Davies said.

It is, at least, if you run your own brewpub, Breakwall Brewing Company, with family. Sure, there’s beer to sell and menus to create, but there’s also finances to monitor, marketing plans to carry out and a brand to manage — all of which he can do thanks to his Business degree with a marketing specialization from Goodman — alongside those no less important details like ensuring the floors are clean.

Davies wouldn’t have it any other way.

“It’s very creative and I get my hands dirty,” he said. “If you’re working for another brand, when you’re not in love with that brand you’re working for, it’s harder to feel passionate about it, whereas when you make a decision here, it’s way more fun and rewarding. Anyone who works in their own business will tell you how satisfying it can be.”

On the home front, Davies’ father Fred (BA ’84) and his stepmother Monica Carusetta were keen to open a bar in their hometown of Port Colborne. Those plans morphed into owning a brewpub where they would make beer and food with fresh ingredients on site, and opened Breakwall Brewing in February 2018.

As general manager, Davies handles marketing and brand identity, and other duties as assigned. He taps into the skills he learned at Goodman every day. He knows how to price a product and establish a successful brand. He also understands project management and the essentials of entrepreneurship.

“Anyone going into business for themselves, I would say [a Goodman degree] is very useful,” Davies said. “I’m happy with what I learned.” 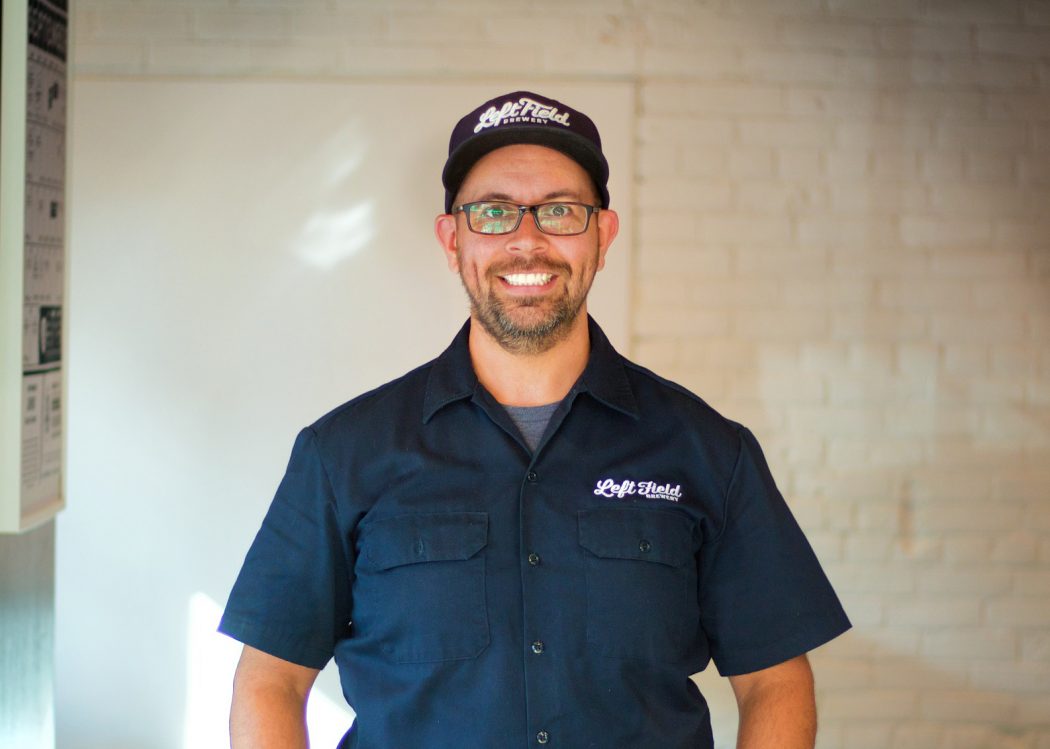 Mark Murphy did what many accounting graduates do. He got a job with a large firm and earned his CA designation.

Five years in, he realized it wasn’t for him. Meanwhile, Canada’s emerging craft brewing industry was poised to become a force and the thought of co-founding a brewery with his wife and fellow Brock graduate, Mandie (BA ’05), held serious appeal.

“I didn’t want to be behind a desk forever,” said Murphy. “I wanted to work with my hands. At the same time, craft beer was exploding, and I wanted to get into it. I thought it would be a good opportunity to combine a previous skill set with a new passion.”

He enrolled in Niagara College’s brewmaster program and started building Left Field Brewery in Toronto with himself as the only employee.

“Being a startup company, getting loans from the bank are not always easy to get,” said Murphy. “Being able to put [my accounting background] on a business plan helped with financing and being able to put together projections.”

In addition to making Left Field’s lineup of beers, Murphy oversees the accounting and brewing side of the business while Mandie handles marketing and sales for the brewery.

“Not having to put dress clothes on in the morning and sit on the subway is a real perk of self-employment,” he said. “It’s been fulfilling to see the business grow from the ground up and continue to grow. I wouldn’t have chosen otherwise, looking back on it.”