FACULTY FOCUS: Kemi Anazodo on the power of listening and authenticity 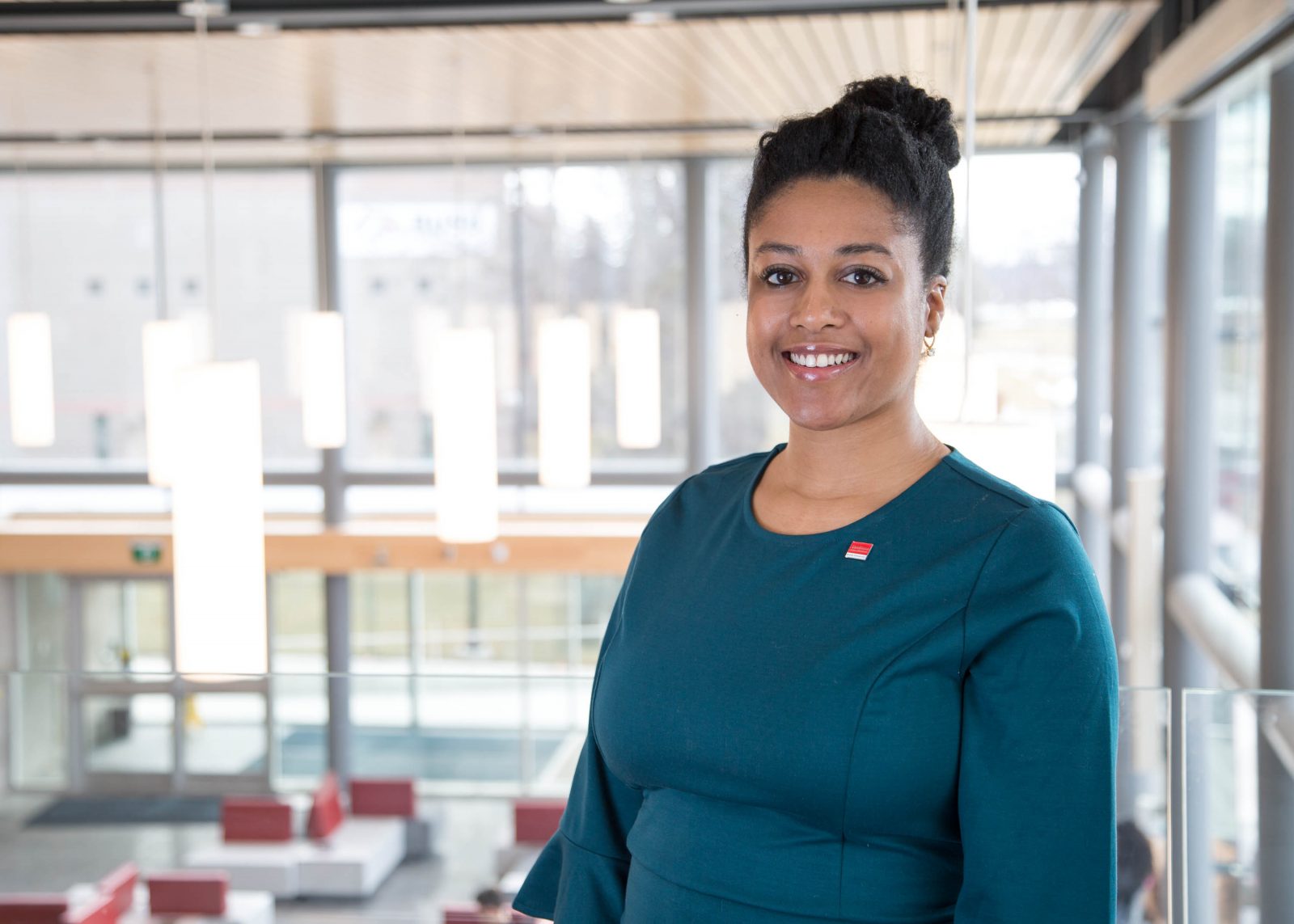 A volunteer experience with the Black Youth Coalition Against Violence during her undergraduate degree at Brock University helped Kemi Anazodo find her path.

The plan was to attend a workshop at a youth detention centre to talk to youth about their futures and try to give some inspiration and guidance for reaching their goals.

“We were supposed to be positive influences, but I got so much from the experience,” says Anazodo, Assistant Professor of Organization Behaviour, Human Resource Management, Ethics and Entrepreneurship in the Goodman School of Business. “I was really impressed by how mature and intelligent they were. It was a seed planted in my mind where I realized we’re really missing out in society when our youth slip through the cracks.”

Anazodo researches stigma, identity and the employment experiences of marginalized populations — in particular, those who are reintegrating into society post-incarceration. She says the world would be a better place if people took the time to understand the stories of others.

“Everyone’s experience is unique and everyone struggles,” she says. “I think if we’re more mindful of each other’s backgrounds and stories, we’ll have a more vibrant idea of what diversity can be. Stories can be very powerful.” 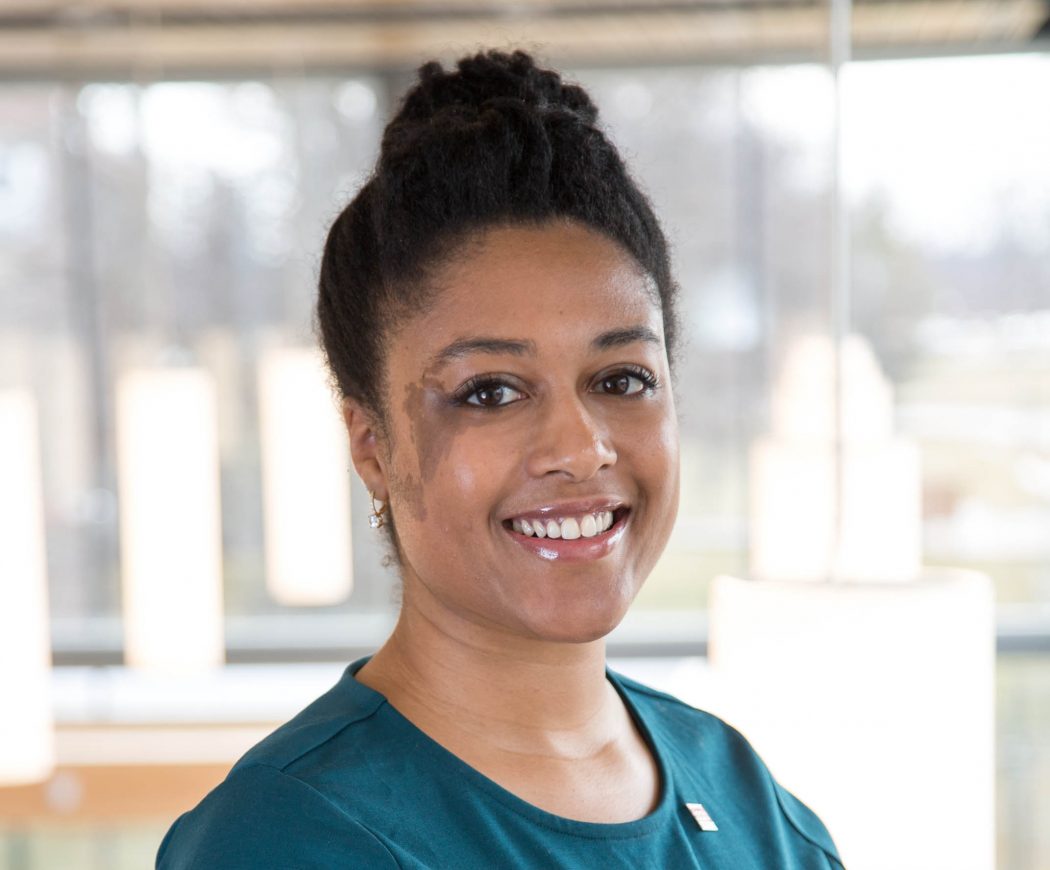 She is also looking beyond those who have been to prison to include more broadly individuals with a criminal history, whether that’s a record, or throughout public exposure; for example, in the media, as well as the unique experiences of women who have been incarcerated.

She says a lot of what she loved about Brock as an undergraduate student is still true.

“It’s always been a diverse-minded community and I love that,” says Anazodo, who left Cambridge, Ont. to study at Brock.

In her teaching role, she enjoys the opportunity to get knowledge out there, but to also learn from students and bounce things off one another.

“I love interacting with students and hearing about how courses have influenced them to think differently,” she says.

While completing her PhD at York University, her family more than doubled in size.

“The timing of my kids was interesting, because as much as I’m spontaneous, I’m very deadline driven,” she says.

Anazodo planned to present her PhD dissertation proposal two months before her due date with her firstborn, who was due in early February 2015. With her proposal defence on Dec. 19, 2014, she thought she had plenty of time.

Instead, her son arrived prematurely on Dec. 10. Anazodo originally thought she would have to leave her son in the hospital for a few hours while she presented her proposal defence, but says the committee was “thankfully supportive of postponing.”

By the time Anazodo was pregnant with twin girls nearly three years later, she was nearing the end of her PhD. Again, she had a plan, and again, her babies had a plan of their own.

She started her faculty position in the Goodman School in early September 2017 and was due in late December. The twins were born Sept. 7. 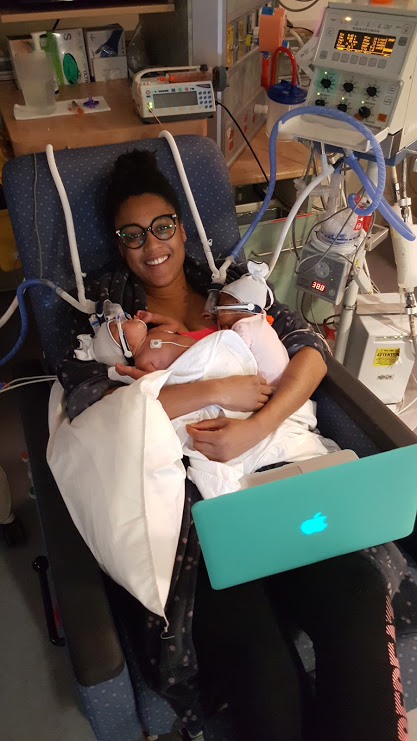 Anazodo worked on her dissertation as her twin daughters, Zara and Ziora, slept peacefully on her chest.

“My girls were a pound each,” she says. “I have pictures of me where they’re sleeping on my chest and I’m typing on my computer trying to finish my dissertation. That’s what it looked like.”

While her and her husband’s twins were in the hospital, she produced more than 100 litres of breastmilk, which was more than they could store in their house. She donated 50 litres to a new mom who was a breast cancer survivor and was unable to breastfeed her child.

“I was still nursing for several months after I returned to work at Brock, often in between teaching classes,” says Anazodo. “I was told by most medical professionals that it wouldn’t be possible for our girls to exclusively nurse and that they hadn’t seen that before, especially for micro-preemie twins. I was really proud of the girls and I for pushing through what is certainly no easy feat.”

Another challenging but rewarding journey, says Anazodo, was embracing her natural hair — and with that, her natural identity as a Black woman with an African-Caribbean background.

“Growing up in a city that’s not diverse, it can be confusing what your identity is supposed to be,” she says. “I spent a lot of time trying to fit myself into what I thought others wanted me to be. Not straightening my hair was sort of a first step in not really fitting a mould.”

She hopes that even when authenticity looks unpopular, people will always strive to be their most authentic selves.

“I look at my journey so far and know the decisions I’ve made are in line with what I feel is right and with who I am,” she says. “I’ve always done my best not to make decisions because another person thought another decision would be better. Know who you are, be true to that and be consistent. Find the courage to share your own story. It doesn’t all have to look the same.”