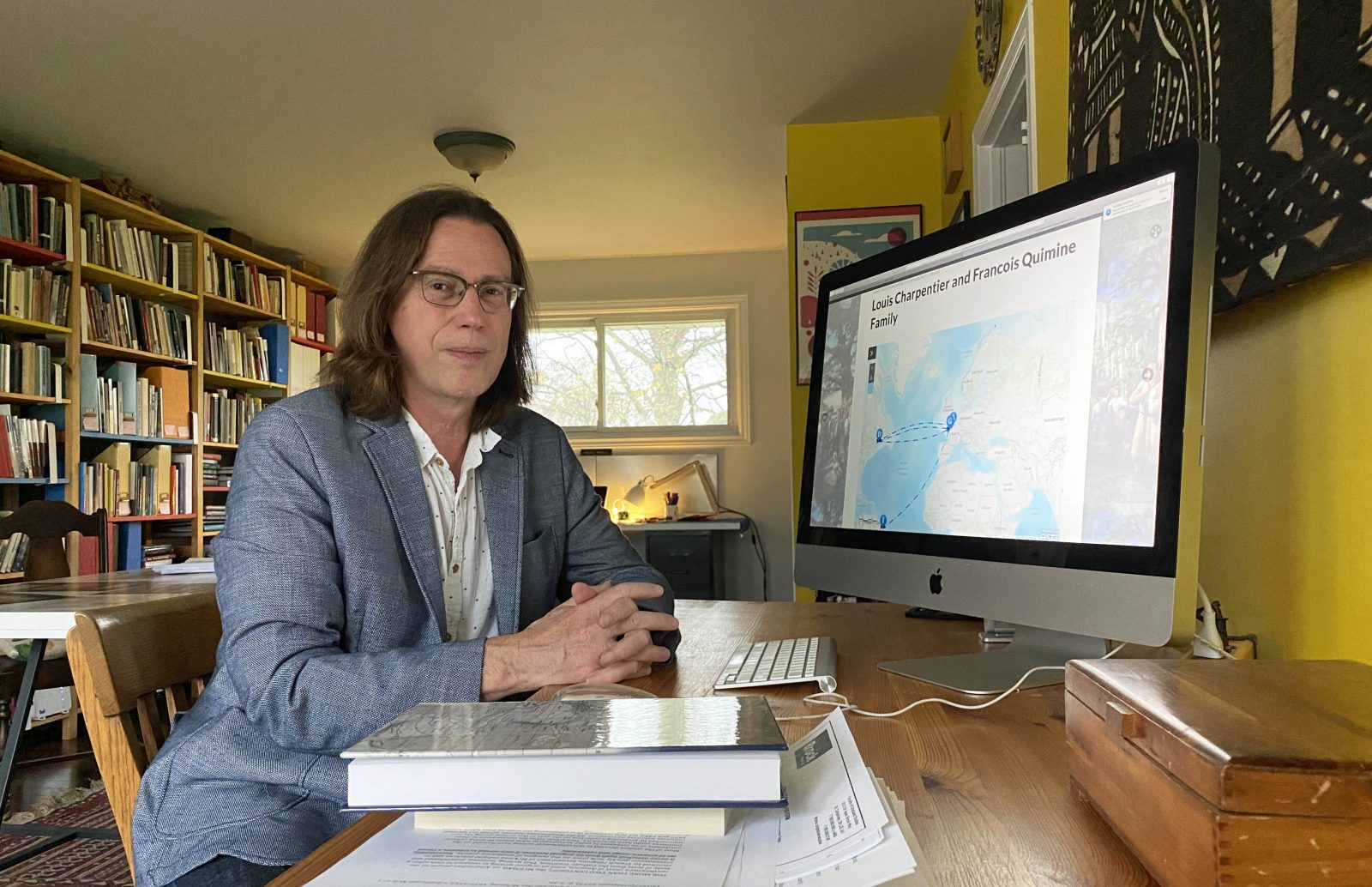 Associate Professor of History Daniel Samson's fourth-year History class created a multimedia website to encourage discussion on the social, political and personal contexts of the event.

When Daniel Samson’s fourth-year history class was forced to go online, his students responded to the challenge with gusto. Now, their ground-breaking work is getting international scholarly attention.

Students in HIST 4P11 researched and developed an interactive website Ile St-Jean: The Expulsion of 1758 , which details the forcible deportation of thousands of Acadians from modern-day Prince Edward Island.

While the expulsion of Acadians from their lands in Nova Scotia in le grand dérangement of 1755 to 1760 is generally well-known, their expulsion from Ile St-Jean isn’t.

“Almost 5000 people were forcibly removed from their lands, many of them already refugees who had escaped the earlier deportation in Nova Scotia, and almost 1500 died from shipwrecks and ship-born diseases,” says Daniel Samson, Associate Professor of History who is instructing the course.

The multi-media project explores the social and political context for the 1758 expulsion and tracks the migration of five families to present a more personal perspective on those caught between the French and British imperial ambitions.

“It’s very much a spatial story with the Acadians who had already fled mainland Nova Scotia, the Seven Years War itself with its movements of ships and soldiers and their effort to rebuild farms and lives on Ile St-Jean,” says Samson. “Their deportation to France, and the subsequent relocations to the Caribbean and Louisiana, is a story of empires in conflict and the human cost for ordinary people.”

Choosing a big, but not well-known story gave students the challenge of telling the story in a publicly accessible manner while using academic research methods. In the process, students learned how to use a variety of digital tools, including ArcGIS, to give the meaningful context to the event, from its global scale to its individual human dimensions.

“Historical web projects like ours are pivotal in broadcasting these stories, especially during a climate that limits our community engagement and historical experiences,” says student Emma McDonald.

When face-to-face classes were suspended due to the COVID-19 pandemic, the students lost access to libraries and archives for their research.

“The group immediately expanded our academic resource base to include local academic historians and any on-line primary or secondary sources that were available,” says student Mike Wielink. “We engaged extensively with government census material from many sources, plus any additional ship manifests or letters which would help us understand some of the individual stories of these Acadian refugees.”

Samson credits the students’ initiative and hard work for the success of the project.

“They broke themselves up into smaller teams and individually to work on aspects of the site, some compiling primary research data, some developing the website and the ArcGIS, some writing up sections, some editing,” he says.

The project aims to promote discussion of the 1758 expulsion by making material more accessible, and it has already been getting attention from scholars. Samson’s introduction to the site on Twitter drew hundreds of engagements from historians, digital humanists and ArcGIS users at universities across Canada and the United States, and as far away as New Zealand and Australia. It has also sparked conversations that he hopes will lead to future collaborations between students at different universities.