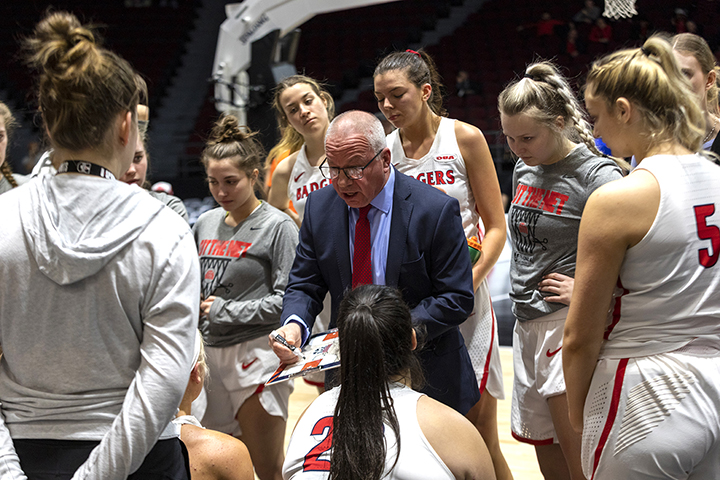 The Brock women’s basketball team enjoyed a historic season with a provincial title and their best ever finish at nationals, with Head coach Mike Rao earning his fourth Coach of the Year award this season.

The Badgers were named the OUA Female Team of the Year for the first time in Brock University’s history while their Head Coach Mike Rao picked up OUA Male Coach of the Year.

“I’m humbled by this award,” said Rao.“It was an amazing season for everyone involved. We’ll carry these memories with us for a lifetime.”

Brock wrestlers Hannah Taylor and Clayton Pye were nominated for OUA Female and Male Athlete of the Year.

“Our student-athletes, coaches, support staff and the entire University have a lot to be proud of,” said Associate Director of Brock Sports Emily Allan. “We were nominated in four of the six major award categories, and I think that speaks volumes about the kind of student-athletes we recruit and the competitive Badgers that we are.”

The Brock women enjoyed a historic campaign as they compiled their best record, 27-8, in program history en route to a second-place finish at the U SPORTS national championships in Ottawa.

The Badgers brought fans on an incredible ride with comeback victories and never-give-up playoff heroics.

In the OUA quarter-finals, the seventh-ranked Badgers upset the sixth-ranked Windsor Lancers 61-57. Brock then beat the fifth-ranked Western Mustangs 69-65 in the OUA semi-finals, clinching their first berth to the nationals in 18 years.

In the OUA Championship game on Saturday, Feb. 29, the Badgers battled the second-ranked Ryerson Rams in Toronto with the Critelli Cup on the line. With an outstanding team performance, including a career-high 42 points from forward Sam Keltos, the Badgers won their first OUA title since 1982-83, beating the Rams 84-71.

They embraced the underdog tag throughout the OUA playoffs and were forced to once again when they traveled to Ottawa to compete at the national championships where they defeated the University of Calgary and the University of Prince Edward Island before placing second with a loss to top-ranked Saskatchewan Huskies.

“I think what wasn’t talked about enough was that we deserved to be at nationals,” said OUA Player of the Year Melissa Tatti. “We kept proving the naysayers wrong. Even after winning OUAs, when we beat Calgary, the announcers were still saying we won off of luck, but every game we kept proving the non-believers wrong. It honestly fed fuel to the fire.”

The Badgers were also recognized with this award for their off the court volunteering and work their work to grow the game of basketball in the Niagara region through the Brock Badgers Scorers Academy, basketball summer camps and the Wise Girls 3-on-3 Basketball Charity Tournament.