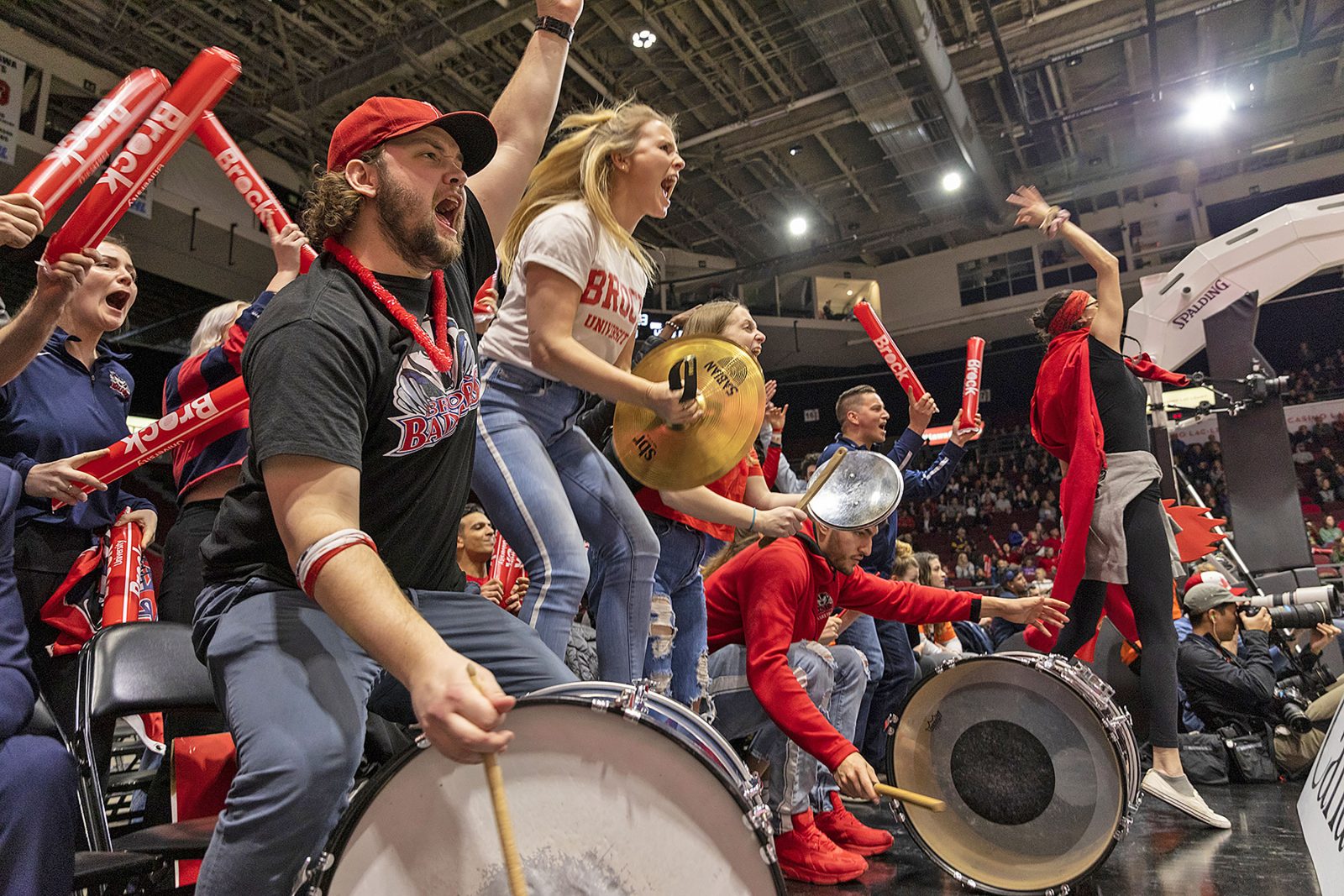 Brock fans made the journey to cheer on the Badgers during the U SPORTS Women’s Final 8 gold-medal game at TD Place Arena on Sunday, March 8.

The Brock Badgers have achieved their best-ever finish at the U SPORTS national women’s basketball championships.

The Badgers had their historic season come to an end as the U SPORTS runner-up in the nation’s capital during an 82-64 loss to the top-ranked Saskatchewan Huskies at TD Place Arena in Ottawa on Sunday, March 8.

“I feel like we just put Brock on the map again,” said fifth-year point guard Melissa Tatti, of Ancaster. “Not a lot of people believed in us, but we believed in us. I wasn’t sure if I was going to come back for my final two years, but I’m so thankful that I did.” 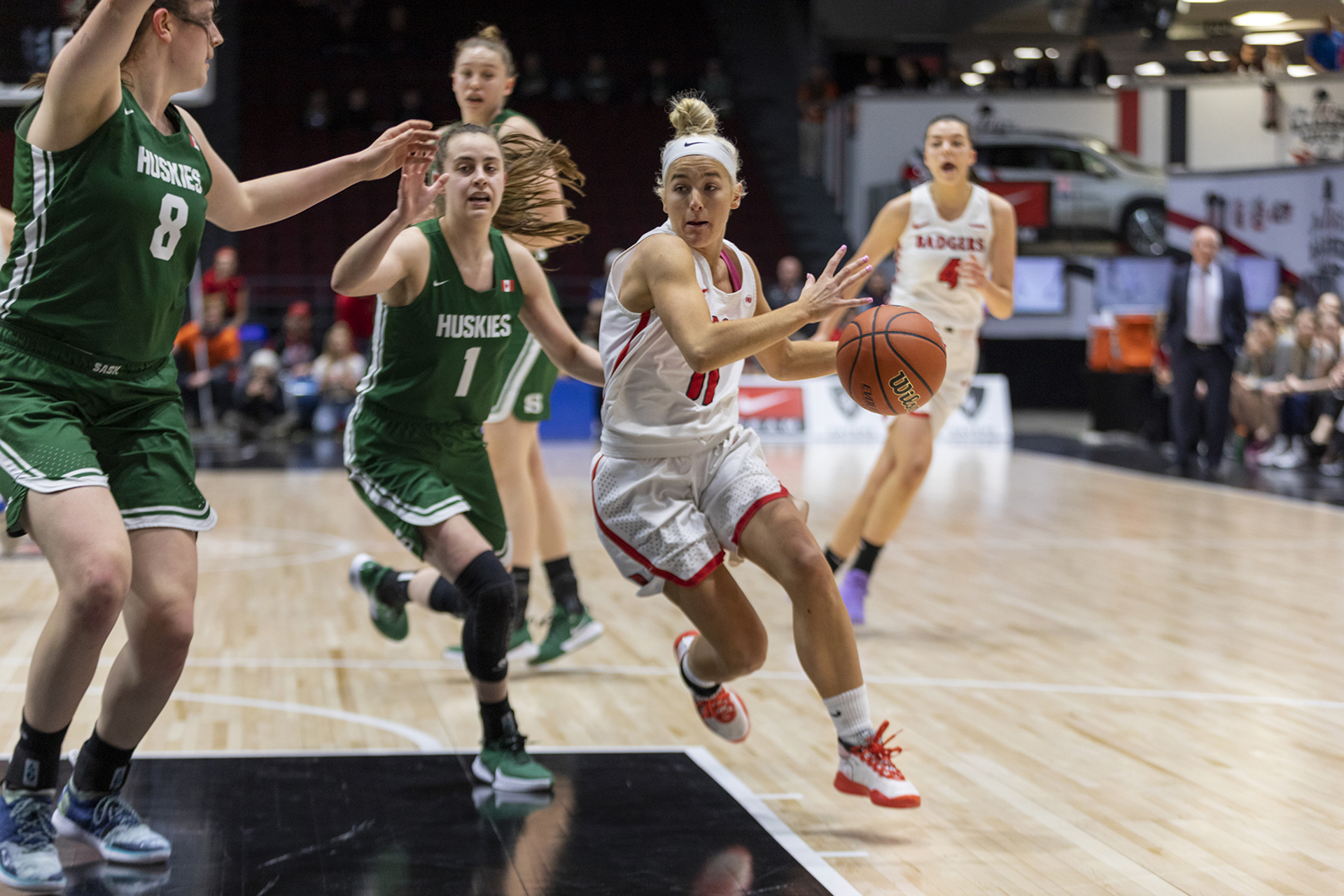 Fifth-year point guard Melissa Tatti drives the ball to the basket versus the top-ranked Saskatchewan Huskies during the U SPORTS Women’s Final 8 gold-medal game at TD Place Arena on Sunday, March 8.

The Badgers finished the regular season with a 17-5 record, one win shy of a program-best total (2012-13), to earn a bye in the opening round of the Ontario University Athletics Critelli Cup playoffs.

“This is for the girls, because they were just tremendous all year,” said Head Coach Mike Rao said after Sunday night’s game. “These girls did some great things. They went against the odds. They just beat team after team, so I’m really proud of them.”

Brock’s wild playoff run started with an incredible fourth-quarter comeback to erase a 19-point deficit to knock out the higher-ranked Windsor Lancers 61-57 on Feb. 22. Ranked sixth in the country, they then upset the fifth-ranked Western Mustangs 69-65 in the OUA semi-finals in London four days later.

As if that wasn’t enough, Brock overcame rivals the Ryerson Rams in Toronto to win their first provincial title since 1983 and their first Critelli Cup since the trophy was renamed in honour of former Brock basketball coach and Assistant Athletic Director Chris Critelli.

“For the last month we really started to peak. We started to share the ball, score, and just play with heart,” said Tatti. “Look where it got us.”

Brock earned a berth and the second seed at the 2020 U SPORTS Women’s Final 8, which marked the first time they competed for a women’s basketball national championship since 2001-02.

“I just want the girls to understand and to feel like what it takes to get here,” said Rao. “I don’t want this to be a one-off run. I want us to contend. That’s my goal with these girls.”

After beating Calgary in the tournament opener and UPEI in the semi-final, they ran into a challenging Saskatchewan team that won the U SPORTS title in 2016.

Brock won the tipoff and Tatti opened the scoring, however the Huskies took the lead and didn’t relinquish until later in the second quarter. Sam Keltos hit a perfect three to put Brock in the lead briefly at 31-29, but the Huskies proved to be too much and led 45-33 at halftime.

Although Brock never led again, second-year Badgers guard Elise Euale brought the boisterous Brock crowd to its feet with a deep three-pointer in the dying moments of the game after the starters had taken the bench to give the younger players a chance to touch the court.

It was perhaps a sign of things to come for the Badgers, who lose Tatti and Jessica Morris to graduation. 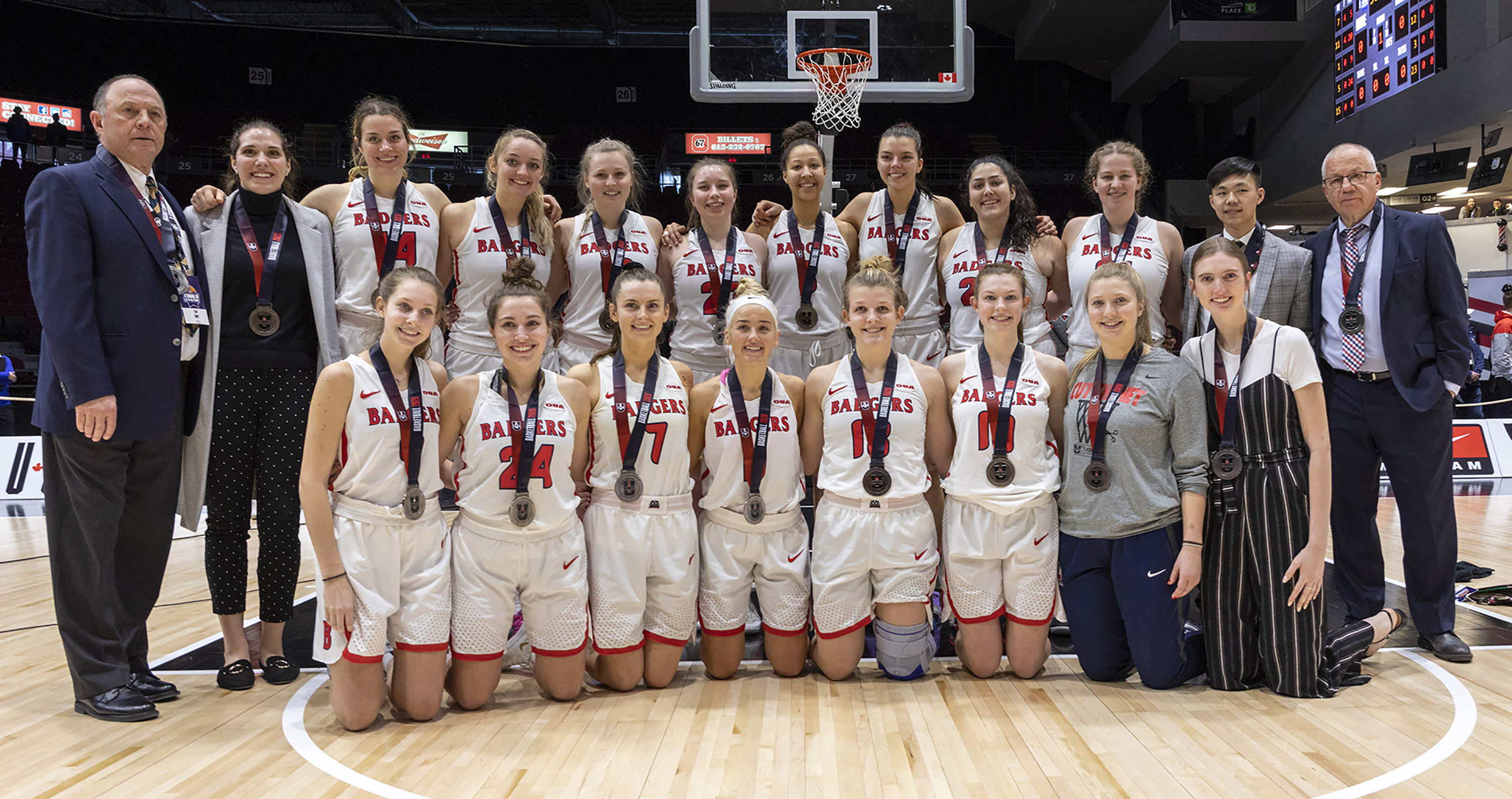 The Brock women’s basketball team poses with their silver medals following a loss to the Saskatchewan Huskies.

Keltos was named Brock’s Nike Top Performer as player of the match for a third-consecutive game. She led Brock with 21 points and was named to the Championship All-Star team alongside Tatti, who netted 14 points, six rebounds and four assists in the final. Jenneke Pilling also enjoyed a standout performance with 12 points and five rebounds.

“I’m so beyond proud and grateful to do this with these group of girls, but we’re not done yet,” said Keltos. “It’s been fun showing people what we can do. We’ve been doubted this whole season, but we’ve been able to be here and show people what the Brock Badgers are all about.”

-Brock University Vice-President, Research Tim Kenyon made the trip to Ottawa and delivered a pre-game speech, including a message from President Gervan Fearon.

-Critelli was honoured during the final as a member of the U SPORTS Top 100 Women’s Basketball Players of the Century. Critelli coached at Brock for 25 years and played for the University of Winnipeg and Laurentian University. Brock’s Candace Clarkson was also named to the Top 100. She played for Brock and Guelph from 1977-84.

-The head coach of the Dalhousie Tigers men’s team, Rick Plato, was named U SPORTS Coach of the Year on the men’s side. Plato hails from Ridgeway, Ontario and was inducted into the Fort Erie Sports Wall of Fame in 2017.