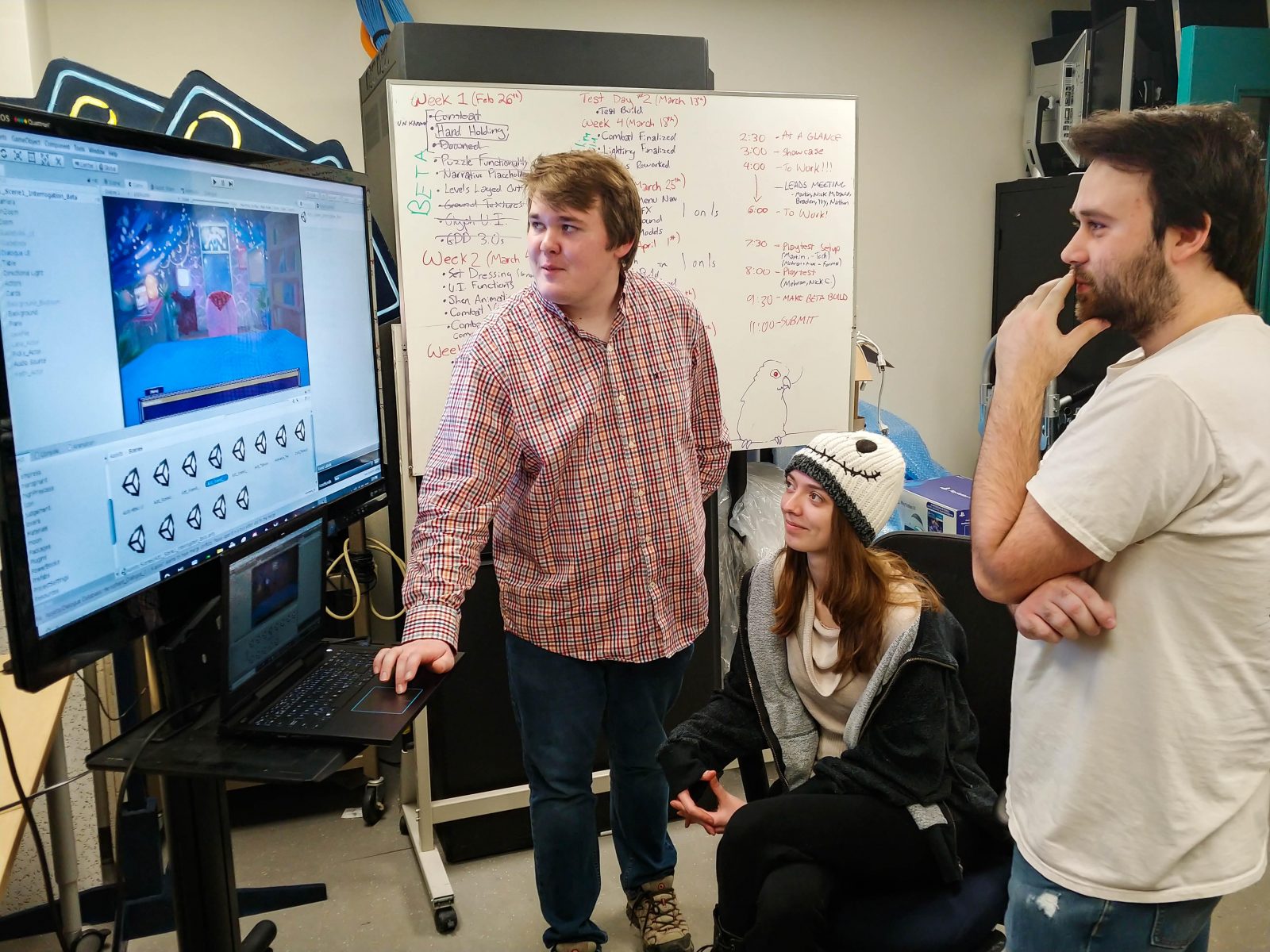 Fourth-year IASC students Noah Chapman, Diane Kohler and Alex Villada review the game-mechanics for their visual-novel game ‘The Hierophant’ in preparation for a public play test March 13. Members of the public are invited to an open play where they can play over ten games developed by third- and fourth- year students.

EDITOR’S NOTE: This event has been cancelled as part of Brock University’s ongoing efforts to protect the health and safety of students, faculty, staff and the community in light of the ongoing COVID-19 pandemic.

For game developers, design is about more than lines of code — it’s about telling a good story.

Brock University’s third- and fourth- year GAME and Interactive Arts and Science (IASC) students are inviting the public to a free playtest held at the University’s Centre for Digital Humanities Friday, March 13 to share their stories.

This year, the 10 IASC and GAME groups involved will be presenting a variety of different games for the public to try, including virtual reality (VR), desktop and console, and physical games. This includes the first graduating class from Brock’s joint GAME program with Niagara College.

For fourth-year students, the games are the students’ capstone projects for the program. Students have been working in teams to create a videogame or digital media project that allows them to collectively use the skills learned throughout their program.

This open playtest gives these students the opportunity to show their work and receive feedback from the public.

Chapman is the tech leader for his fourth-year capstone project and has already began exploring how he can use this course and the materials offered to jump-start his future career.

“The open playtest is a great way to show off what the Interactive Arts and Science and GAME students have been working on this year,” says Tom Brown, Projects Coordinator for Brock’s Centre for Digital Humanities.

“Allowing students to get feedback not just from Brock students but our regional partners in the interactive digital media space gives students more networking opportunities before graduation. I’m excited to see the great work our students have done over this year and show that off to everyone who can make it.”

What: A free playtest created by Brock IASC and GAME students who will present a variety of games, including virtual reality (VR), desktop and console, and physical games
Who: Third- and fourth-year Brock students and the public
When: Friday, March 13 from 5 to 8 p.m.
Where: Thistle 269 (TH 269) at Brock University, 1812 Sir Isaac Brock Way, St. Catharines, Ontario

This story was written by fourth-year IASC student Hayley Wilhelm.