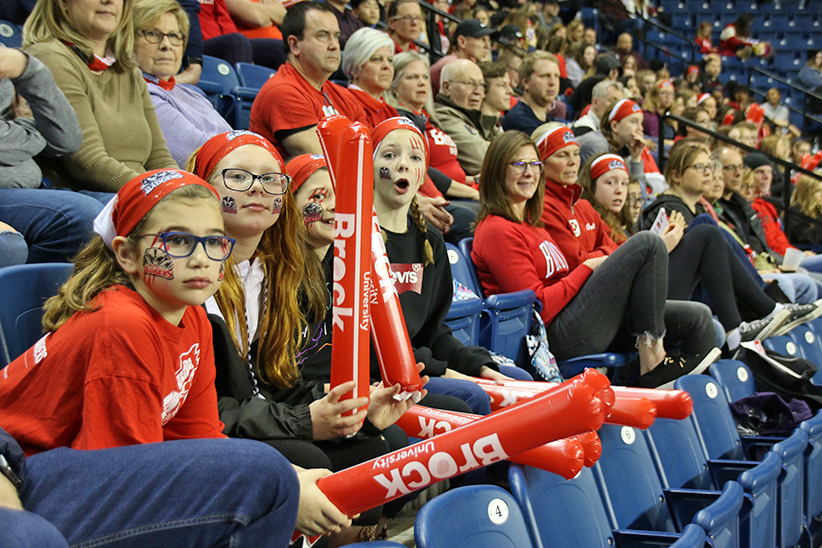 Brock University is encouraging faculty, staff and students to wear red Friday, Feb. 28 to show support for the women's basketball team which will play in the provincial championship game Saturday.

To help support the Brock Badgers women’s basketball team, which is in the midst of one of its most successful seasons in years, faculty, staff and students are encouraged to wear red on Friday, Feb. 28.

After coming from behind in three-straight games, the Badgers are set to face the Ryerson Rams in the Ontario University Athletics (OUA) championship game in Toronto on Saturday, Feb. 29. The two teams will be competing for the Critelli Cup, named after long-time Brock Assistant Athletic Director and women’s Head Coach Chris Critelli.

Brock has only ever won a single OUA title — in the 1982-83 season. By way of making it to the OUA final, the Badgers have also earned the right to compete in the U SPORTS National Championships, being held in Ottawa March 5 to 8. It’s the first time the Brock women’s team has made it to the championship tournament since 2001-02. They’ve only been to the event three times in team history — highlighted by a bronze medal won in that same 1982-83 season.

A fan bus is scheduled to leave Brock at 3 p.m. Saturday and will return after the game. The cost is $10 and includes the bus trip and a ticket to the game. Tickets for the trip are available at brocku.universitytickets.com

The championship game will also be streamed live on televisions in Brock’s Market Hall, Hungry Badger and across Walker Sports Complex.

In addition to the women’s basketball team playing in the OUA final, the men’s and women’s volleyball teams are also competing in their respective OUA playoffs on Saturday.

The women’s volleyball team will host its first-ever OUA playoff game at Bob Davis Gymnasium at 6 p.m. Saturday against the York Lions. The men’s team will travel to the University of Toronto to play the Varsity Blues in a 3 p.m. game. Both matchups are OUA quarter-finals with the winners to advance to the semis.

Note: To help get Badgers fans dressed in red for the game, the Brock Campus Store is holding a Red Friday sale with all red Brock University and Brock Badgers gear 20 per cent off. The store is open from 8:30 to 4:30 p.m. Friday and 10 a.m. to 3 p.m. Saturday.