FACULTY FOCUS: Tim Murphy on why dogs and statistics should be human’s best friend 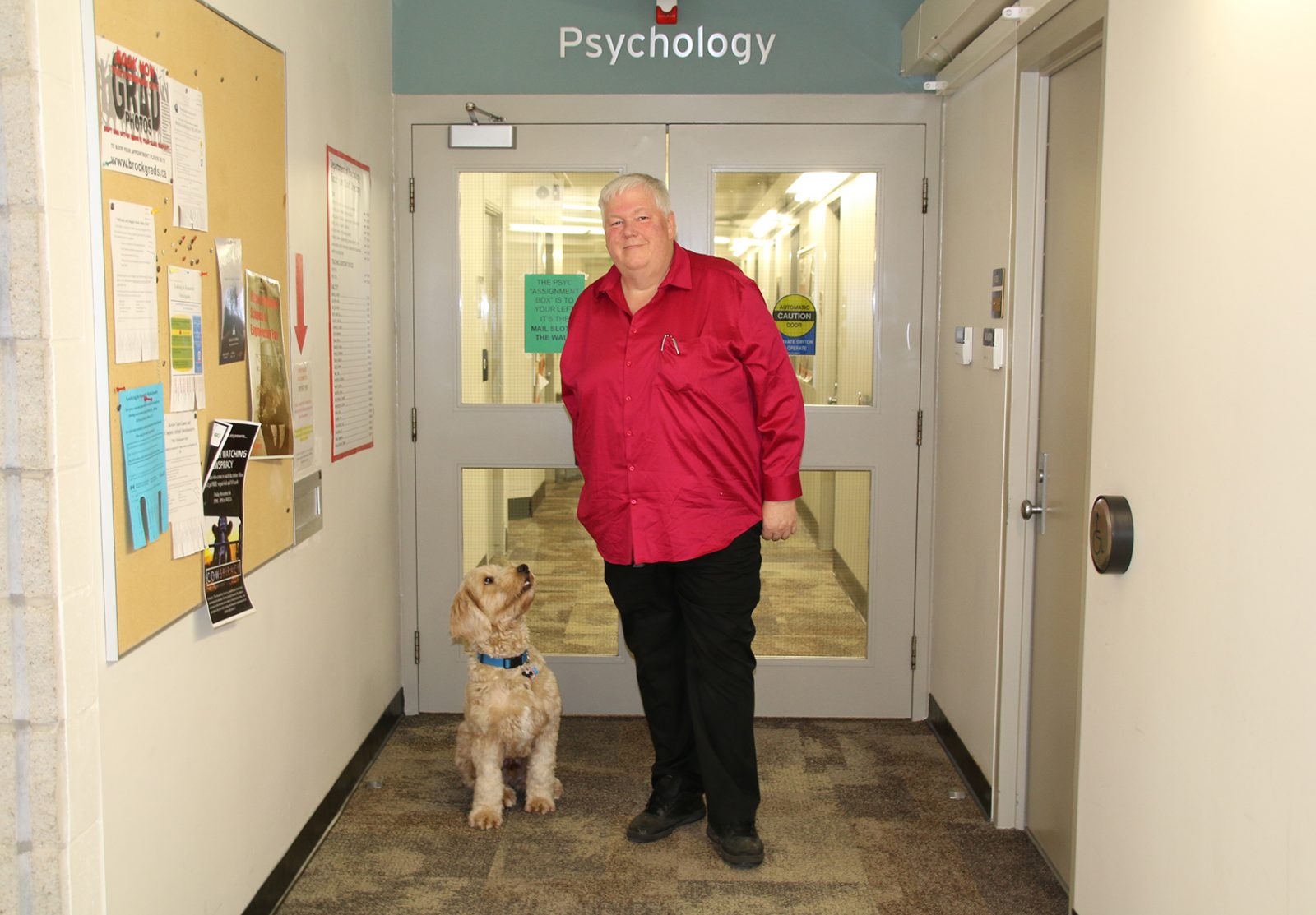 Professor Tim Murphy's name is equally synonymous with being a great teacher as it is with his Goldendoodle, Paddi (short for Paddington Bear). His passion for working with students and innovative teaching, including Stats Improv, are some of the reasons he's been the recipient of various teaching awards from the University.

Tim Murphy describes his career as accidental in many ways.

The professor in Brock University’s Department of Psychology dreamt of teaching high school math, which was set in motion by pursuing a mathematics degree from the University of Waterloo.

There was just one problem: at the time, he was a self-proclaimed horrible student, quashing the prospect of getting into teacher’s college. After graduating, he went back to his summer job of truck driving and ended up staying for seven years.

It wasn’t until his late-wife Wendy talked him into going back to school that his dreams of being a high school math teacher reignited. The couple pursued their second degrees — this time, Psychology at Brock — because they both thrived in Psychology classes during their first degrees, theorizing that it may bump up their grades and probability of being accepted to teacher’s college.

They both loved psychology so much, they decided to stick with it, completing their masters degrees at Brock and beginning their PhDs at Waterloo. Wendy became ill and passed during this time, but eventually, Tim attained his PhD in Psychology from Waterloo. 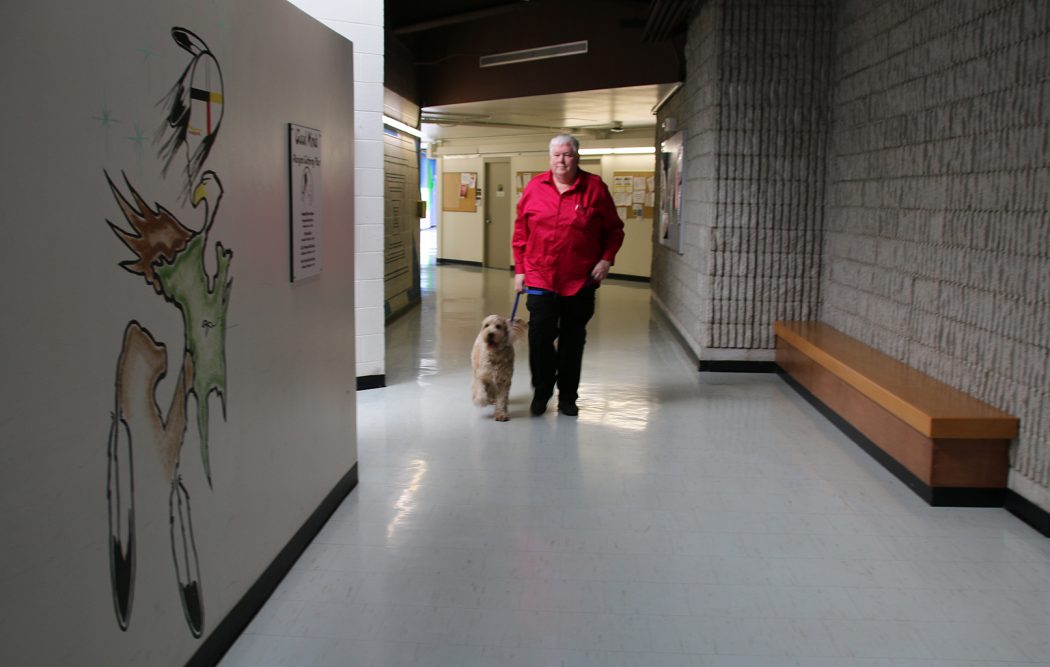 His experience as a truck driver and being on the road for long periods of time sparked his interest in the effect of sleep deprivation on brain function, including risk assessment during sleepiness.

“I was driving tired a lot,” says Murphy, who, at the time, was also in a competitive bagpipe band, the 78th Fraser Highlanders Pipe Band. “We were world champions in 1987, so it took up a lot of time. I was often driving my truck for 10 hours a day and then going back to Toronto for rehearsal. Sometimes I would sleep in my car, get back in my truck the next morning and drive again.”

Despite having an interest in sleepiness, Murphy doesn’t often tire. He was offered a teaching position at Brock in 1995 and has been teaching the same course ever since. He says he’s yet to grow bored of it.

“I really enjoy teaching,” says Murphy. “It’s a fresh class every year. Each class is exactly the same in general, just different people.”

His passion for teaching, and ability to do it extraordinarily well, hasn’t gone unnoticed. He’s been the recipient of various teaching awards — most recently, the Distinguished Teaching of Large Classes Award in December 2019 — and it has been suggested by the Centre for Pedagogical Innovation that he lead workshops on teaching statistics.

“I always used to tell them that I am not really sure if I could quantify and design a course that shows people what I do,” says Murphy. “I just like it and am enthusiastic enough that I drag the rest of the class with me, whether they want to or not.”

One of the highlights of his class is what he calls Stats Improv, which involves students suggesting topics that he turns into questions.  They then make up data and he performs the analysis in front of the class.

“It does not matter what nouns you attach to the different groups,” he says. “I can fit an analysis into any topic. If I am working with students one on one, I will ask what their hobbies are and use that topic to create a question. It creates a bit of a comfort level.”

Murphy is a firm believer that everyone should know something about statistics, and that being critical of information allows people to make better decisions.

“I’ll achieve one of my goals if students leave my course just appropriately cynical and questioning of the world,” he says. “People will try to mislead you with numbers, but if you know a little bit about it, you can often at least be suspicious or recognize when you are potentially being misled.” 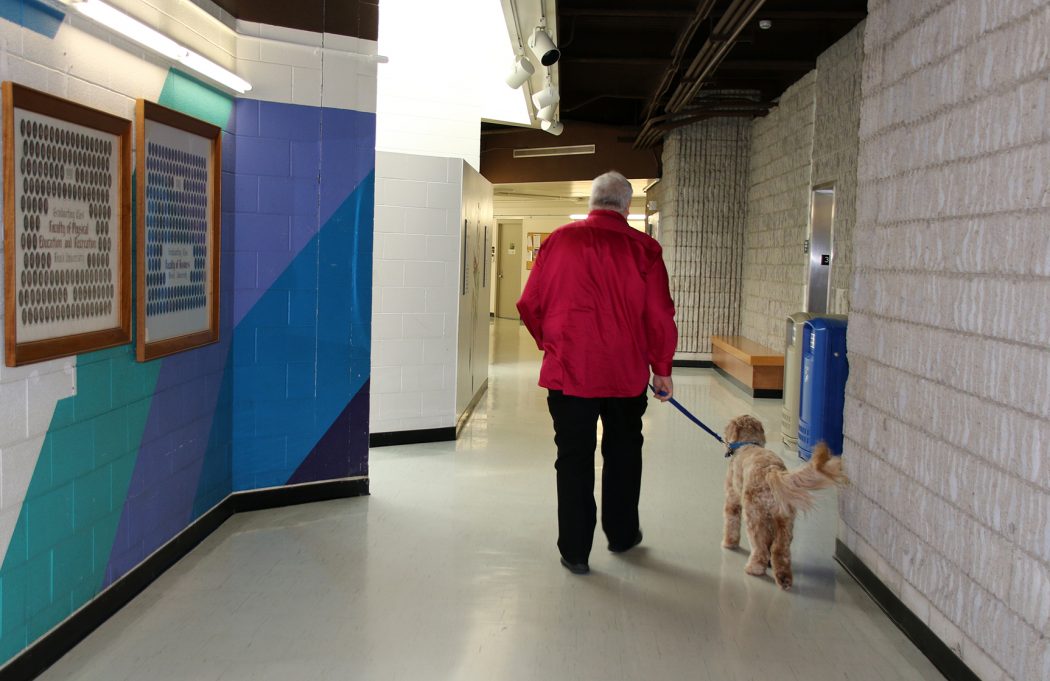 At Brock, Murphy’s name is equally synonymous with being a great professor as it is with his four-legged companion, Paddi (short for Paddington Bear). The name was chosen from a series of options voted on by the Department of Psychology and finalized, of course, using statistics.

“Cooper, Kahlúa and Teddy were other names in the running, but Paddington Bear won out,” says Murphy.

Prior to Paddi, Murphy’s Cairn terrier Sophie, a puppy mill rescue, reigned the hallways of Mackenzie Chown. Murphy thought he was sneaking her in, but eventually ran into everybody from his Dean to the President to Campus Security. No one seemed to mind.

When he discovered there was an official process to have an animal on campus, he got proper approval, crowning Sophie the first non-service, regular dog on campus.

After Sophie passed away, a woman told Murphy she may have a dog for him, as long as he wasn’t afraid of vet bills.

Donning a dislocated kneecap, Paddi was unable to be sold. Murphy could have him for free, she said, if he promised to fix his knee.

“When I took him to my vet, it turned out both of his knees were bad,” says Murphy. “Paddi required two surgeries so I joke that he is my $7,000 ‘free’ dog.”

Paddi is at Brock nearly every day — “It’s good company for me, Paddi is very well behaved, and people complain if I do not bring him in,” he says — however, he occasionally brings Paddi into his classroom. When he does, it’s to help demonstrate a dog IQ scale and explaining why this type of scale requires using a method of data analyzation different from typical methods.

Using techniques to get students excited about learning and statistics is one of his passions, and the thing he is most proud of is the number of former teaching assistants and students who have gone on to teach statistics.

“In my former life as a competitive drummer, people say you are not remembered as much for what you do, but what your students do,” he says. “You have to pass things on.”