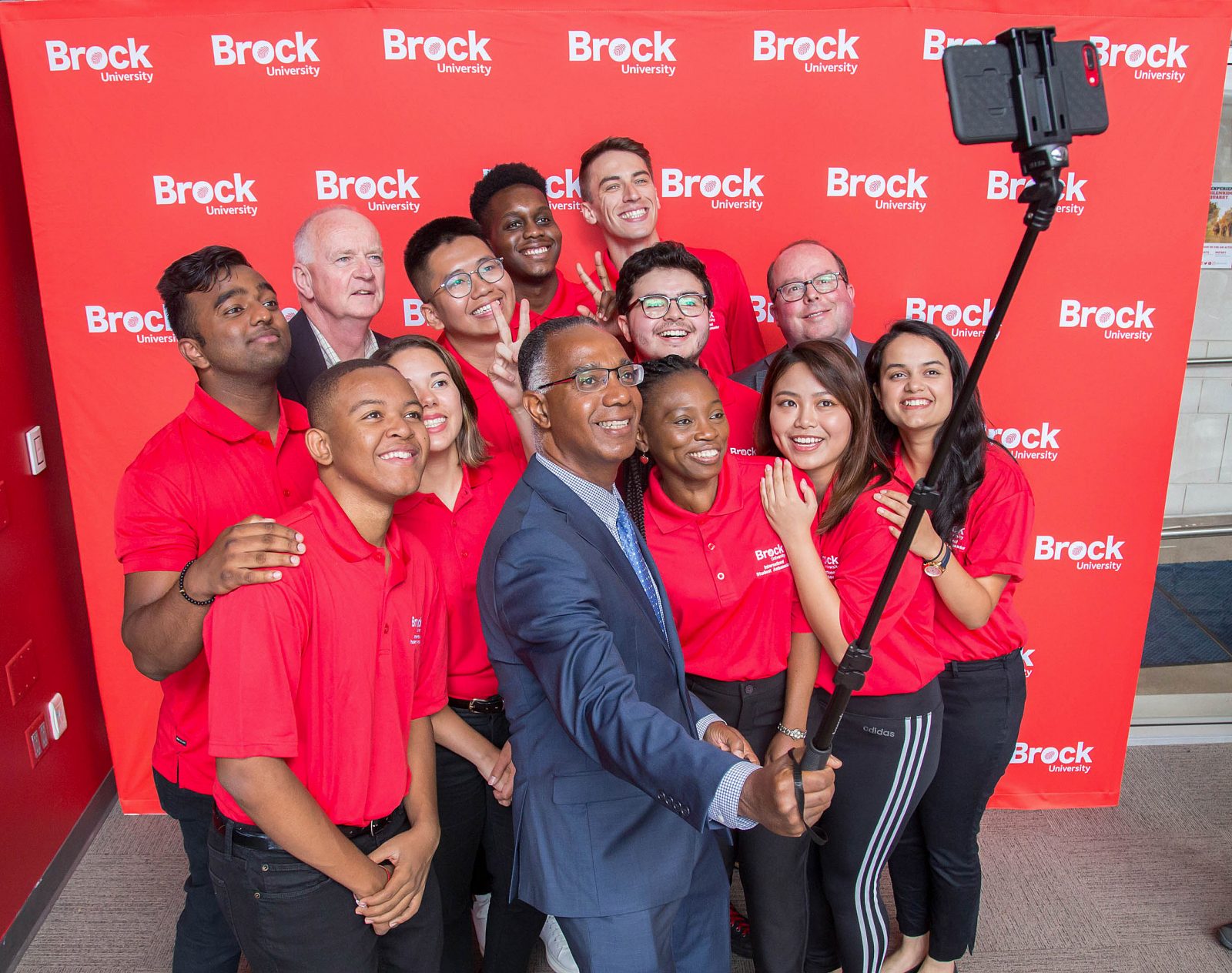 Moving thousands of kilometres from home isn’t a decision most would make lightly, but for 10 students from 10 countries around the world, Brock made it difficult to leave room for doubt.

Their commitment to the University, as well as their passion for studying in Canada and globalization, saw them named Brock’s 2019-20 International Student Ambassadors.

The group was introduced to the Brock community by President Gervan Fearon during a welcome ceremony at the Brock International Open House held Sept. 4. 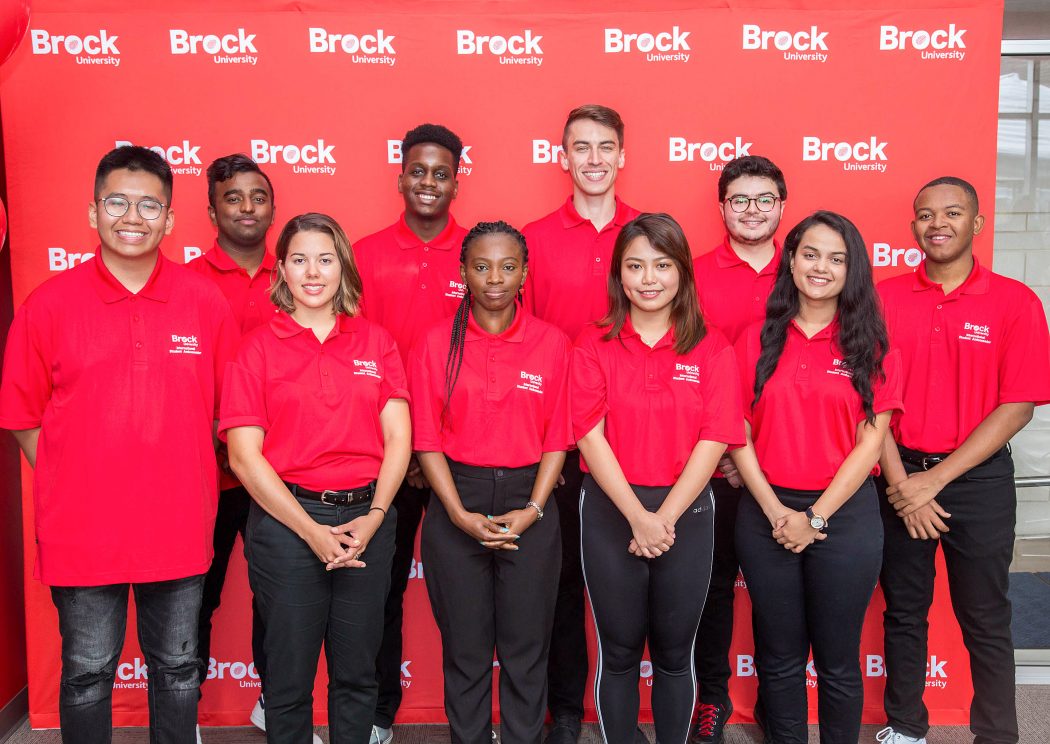 The ambassadors work diligently with Brock International throughout the school year by communicating with prospective international students about what life at the University is like both inside and outside of the classroom. This includes sharing details about living in Niagara, how studying at Brock is helping them prepare for their careers and why they decided to pursue their studies at the University.

“The effects of our work are beyond measure,” says International Student Ambassador Santiago Negret Rey. “There is no metric for what we do; the impact we have on students is everlasting, as is their impact on us.”

Recipients of the International Student Ambassador Scholarship have their international tuition fees reduced to the domestic rate — a discount of about $20,000.

Students interested in sharing their passion for Brock with the world can apply in early 2020 to be an International Student Ambassador for the 2020-21 academic year. Information about the next round of applications will be posted online as it becomes available.

Originally from Brooklyn, N.Y., Jabulani Chipembere grew up in Costa Rica with dreams of one day becoming a sports agent. He knew the Sport Management program at Brock would help turn those dreams into a reality. His advice to prospect international students is to develop a relationship with their regional international recruitment officer and, if possible, visit campus and residences in person to get an authentic feel for the Brock student experience.

Returning as an International Student Ambassador for the third consecutive year and representing the University as captain of the Brock men’s volleyball team, Marcelo Correa’s leadership shines on and off the court. The fourth-year Biotechnology student plans on applying to pharmacy school or completing a master’s degree in his field with hopes of finding a job in scientific research. He considers being an International Student Ambassador an honour that allows him to not only represent the University outside of Canada, but also Brazil while on campus.

With her home country already linked to St. Catharines (the Garden City is the twin city to Port of Spain, Trinidad and Tobago), Ana Ferreira felt a natural connection to Brock. The third-year Kinesiology student is returning as an International Student Ambassador for her third straight year. Ferreira is a familiar face at Brock, often serving as a host for international promotional videos on affordable living, international mobility and international student support. In addition to being an athletic trainer for Brock’s cross country and track and field teams, Ferreira is involved in various clubs on campus. She plans to use her Brock degree as a starting point for a career in physiotherapy.

Being a first-year student hasn’t stopped Antony Gitahi from quickly building a reputation for himself on campus. The Media and Communication Studies student and aspiring film director was one of two first-year students to receive the International Student Ambassador Award. With a passion for championing the rights of minorities and underrepresented groups, he hopes to use film to tell stories about people who are often ignored by mainstream media. Gitahi looks forward to meeting new students from different parts of the globe, enhancing his educational experience and thriving in an increasingly multi-cultural world.

A transfer student from the American College of Higher Education in Sri Lanka, Ammaar Ruxshan Juhardeen arrived at Brock in 2018 to pursue Economics. Now in his second year, Juhardeen is heavily involved in the University community, serving as President of the Sri Lankan Student Association, member of the International Student Association and South Asian Association, and avid participant in intramural sports. He’s also collaborated with the Brock Pakistani Association and the Brock Bengali Association to host one of the University’s largest cultural events, which won Best Event of the Year at the Brock University Students’ Union clubs banquet. Juhardeen encourages new international students to get involved in clubs, intramurals and other extra-curricular activities.

Second-year student Ishita Kapoor’s passion for Brock was sparked by learning about its Psychology and co-op program. During her first semester, Kapoor met people from all over the world, including a group of exchange students from Australia, France, Slovakia and the U.K. She encourages new students to socialize and meet new people as often as possible. “One of the best things about my life at Brock are the friendships that I’ve made,” Kapoor says. She plans on completing a master’s degree and eventually becoming a clinical psychologist.

Aiden Luu’s journey as a Brock International Student Ambassador started in 2018 with ESL Services. He received a conditional offer into a Bachelor of Business Administration but needed to complete the English language requirements before starting his undergraduate career. “I had the opportunity to improve my English, get to know Brock, learn about Canadian culture and meet new people from around the world,” says Luu. Now that he’s graduated from ESL Services Intensive English Language Programming, he’s looking forward to joining the Goodman School of Business and participating in the JDC Central business competition.

Seyi Obasi completed her undergraduate degree in Biological Sciences at the University of Lagos before pursuing her Master of Sustainability at Brock. She was attracted to the University for its cutting-edge research that is directly in line with her field of study. As a Research Assistant in the Environmental Sustainability Research Centre, she’s able to experience the modern facilities and transdisciplinary approach to sustainability science that makes Brock the ideal location for her program.  She plans on using her degree to provide consultancy services, helping organizations and government institutions solve environmental problems.

Santiago Negret Rey did not know how heavily his life would be impacted by going on exchange. After living in New Brunswick for six months more than seven years ago, he was charmed by local culture and the friendliness of Canadians. When deciding where to pursue his post-secondary education, Rey was swayed by Canada’s stance as one of the top countries in the world for game development and reputation as a top destination to live and study. Returning as an International Student Ambassador, Rey is now in his third year of Brock’s Game Development program.

Now in her final year of Accounting with the Goodman School of Business, Vicky Wang becomes an International Student Ambassador with a wealth of knowledge and experience. She’s part of the Brock Chinese Student and Scholar Association, the Goodman Accounting Students Association, and was also a Goodman career assistant. After graduating, she plans to further her education in Goodman’s Master of Accounting program. Wang encourages all future international students to live on campus during their first year, as that’s where she was able to make new friends that helped her overcome a wide range of cultural barriers, and boost her spoken English in a very short period of time.