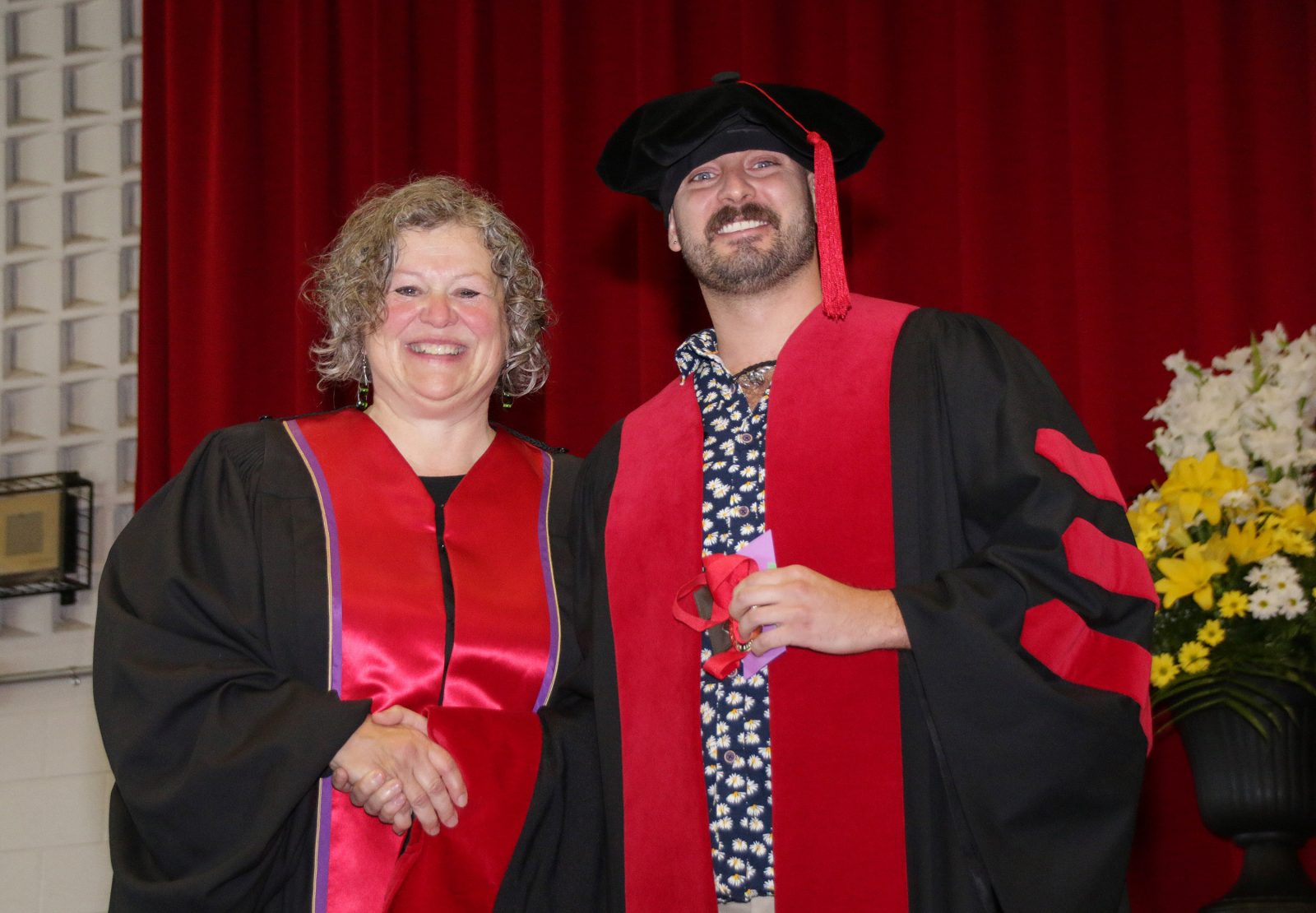 Bryan Giordano is presented his Spirit of Brock Medal by Board of Trustees representative Elisabeth Zimmerman Friday, June 14.

Some students make a significant impact on research at their post-secondary institution. Others make an impact on the student experience. Bryan Giordano (BSc ’12) has done both — in very big ways.

On Friday, June 14, the Whitby native received his PhD from Brock University and was awarded the Faculty of Mathematics and Science graduate student Spirit of Brock Medal.

It wraps up a remarkable tenure at the University for Giordano as both a Biological Sciences student and a champion for inclusiveness on campus.

“It’s very emotional. It’s a very big chapter closing in my life,” he said. “It has been a crazy journey. I feel like I really dived into the full Brock experience.”

After graduating with a Biology and Biophysics undergrad degree in 2012, Giordano started his master’s, but rolled that into a PhD instead.

“It was a crazy time. My project was mostly with West Nile, but then when Zika virus hit everything sort of fell into place,” he said. “We were able to take the research program and shift it toward Zika. I was in the right place at the right time.”

Outside of the groundbreaking work being done in Hunter’s highly specialized containment lab, Giordano fought for issues that were close to him.

In 2017, he asked senior administration to consider flying the Pride flag on campus during Pride Month.

“Actions speak so much louder than words and for someone who is a member of the LGBT community to see how swiftly it happened once I asked, it symbolized how much this University respects equality and LGBT rights,” he said. “For so many people who are questioning their sexuality or are unsure of where they fit, seeing those flags up there means so much and it creates such a safe space.”

Giordano, who also successfully pushed for non-gendered washrooms on campus and other related issues, has now accepted a postdoctoral research position at the University of Florida. He will spend half the year studying the insecticide resistance of Monarch butterflies, and the other half researching the spread of the deadly Eastern equine encephalitis disease. 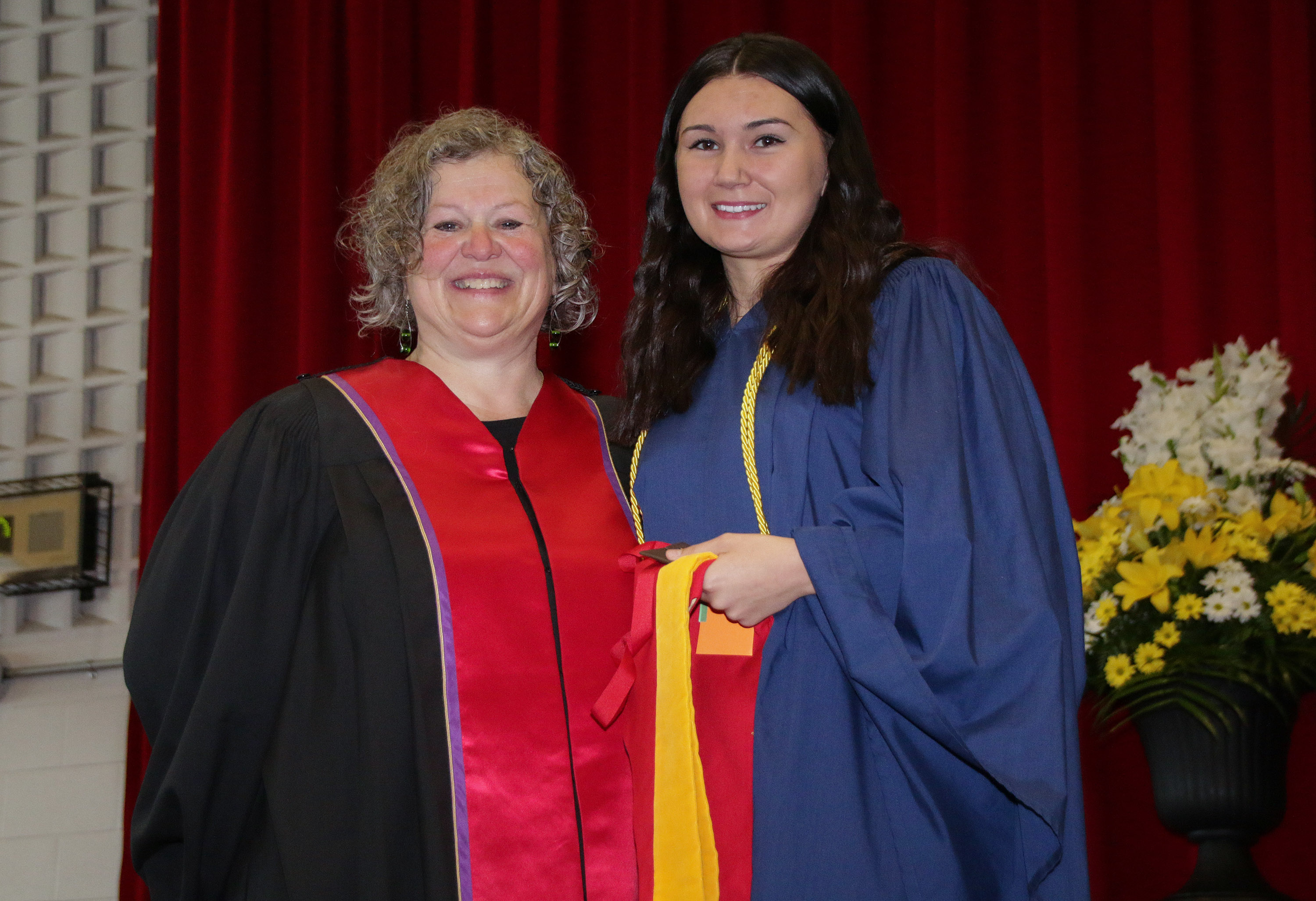 Olivia Bagshaw is presented the Faculty of Math and Science undergraduate Spirit of Brock Medal from Board of Trustees representative Elizabeth Zimmerman.

In addition to maintaining a spot on the Dean’s List throughout her entire undergraduate time at Brock, St. Catharines native Olivia Bagshaw certainly exemplified the spirit of Maj.-Gen. Sir Isaac Brock through her extracurricular activities.

The Biological Sciences graduate is a dedicated volunteer and member of the Brock Badgers women’s rowing team. She has also worked part time in a research laboratory and been included as an author on several research papers.

“I’m incredibly honoured,” Bagshaw said. “I tried my best to work really hard all four years of university, so it’s nice to be recognized.”

She said that her time on the rowing team and volunteering has taught her more about leadership and perseverance.

“This award is representative of what I’ve learned,” she said, adding she’s thankful for the many opportunities the University offered for her to get involved.

Bagshaw will be returning to Brock to pursue her master’s degree in Biology in the fall. She is the recipient of the Jill and Ian Brindle Experimental Sciences Award, an NSERC USRA Award for 2019 and NSERC graduate scholarship for 2019-20.