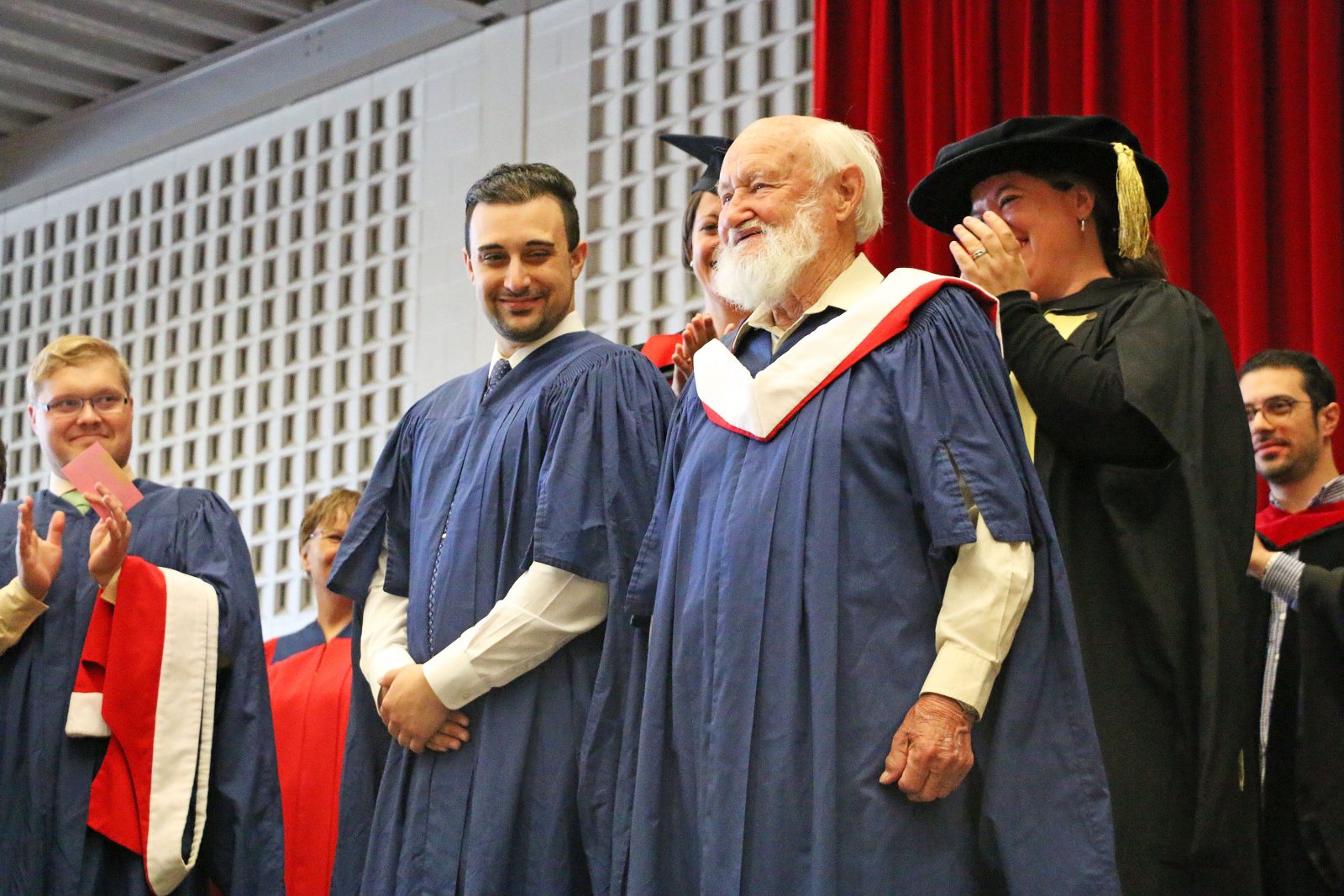 The crowd gave Robin Guard a standing ovation on June 9, 2017 when he broke his own record as Brock University's oldest-ever graduate. He'll break that record again on Friday, June 14 when he earns a Classics degree at the age of 95.

When Robin Guard earns his third Brock University degree Friday, he’ll be breaking the record for the oldest-ever graduate — again.

Guard (BA ’15) initially broke the record in June 2017 when he graduated with a master’s in History at the age of 93. Although he won’t be in attendance for the Faculty of Humanities Convocation ceremony Friday, he’ll graduate with an undergraduate degree in Classics — this time at the age of 95.

Learning has been a lifelong pursuit for Guard, who earned a degree in electrical engineering from Royal Hollaway, University London in the early 1950s and worked in the nuclear power field for more than 30 years.

“My career has always involved learning,” he said. “When they de-classified the secrets of atomic energy, I joined the staff of Britain’s first nuclear power station and struggled with nuclear physics.”

Originally from the UK, Guard and his late wife Barbara immigrated to Montreal in the mid-1960s before moving to Toronto with their four children in 1980 following the collapse of the nuclear industry. They retired to Niagara three years later, establishing Gwennol Farms, a 15-acre organic vegetable and sheep farm which the couple ran for 15 years.

After losing his wife to cancer, Guard looked for a new project to help him through the difficult time. Learning he could take courses at Brock for free because of his age, he decided to switch from highly technical engineering subjects to studying the humanities.

His first Brock degree was in English Literature in 2015, followed by the master’s in History in 2017, and now the Classics degree he’s set to receive.

One of his Classics courses was in senior Latin with Professor Carol Merriam, Dean of the Faculty of Humanities.

“When Robin took my class, the other students were at first bemused by this much older man in their midst, but soon accepted him as a classmate on the same mission and with the same concerns,” she said. “They were all together in dealing with difficult language and material, and the rest of the class soon came to rely on Robin to ask the technical questions that would lead to greater clarity for everyone.”

Guard said he appreciates the way others accepted him as a student.

“I am so grateful for the fact that Brock’s professors, sometimes half my age, treated me like any student, with no concessions,” he said.

When Guard started taking courses, he wasn’t sure how he would fit in as a mature student, but he formed close friendships with two other mature students, Allan Edgington (BA ’15, MA ’17) and Pat O’Hara (BA ’07, BA ’16). The trio, who call themselves the ‘Three Old Farts,’ brought valuable perspectives from their lived experiences to classroom discussions and provided support and mentorship to younger students.

“There’s no doubt that any talents I have are due to my dear parents, both born in the 19th century and whom I never really thanked enough,” said Guard, who was born between the two World Wars and grew up during the Great Depression.

“We were dirt poor and living off the land,” he said. “My mother was the ambitious one. She sent me to a remarkable one-man school where I learned things they don’t teach any more.

This will be Guard’s last degree from Brock, as he has decided that rather than continue his studies, it is time to record some of his own history. Having lived through nearly a century of history, Guard is drawing on what he has learned about writing and studying history to write his autobiography.

“Throughout his academic career at Brock, Robin’s endless curiosity has driven him to examine details and connections,” Merriam said. “When they’re older, students who have been with him in classes will remember his example and continue to pursue learning in their own later years — as will many of the professors who have taught him.”