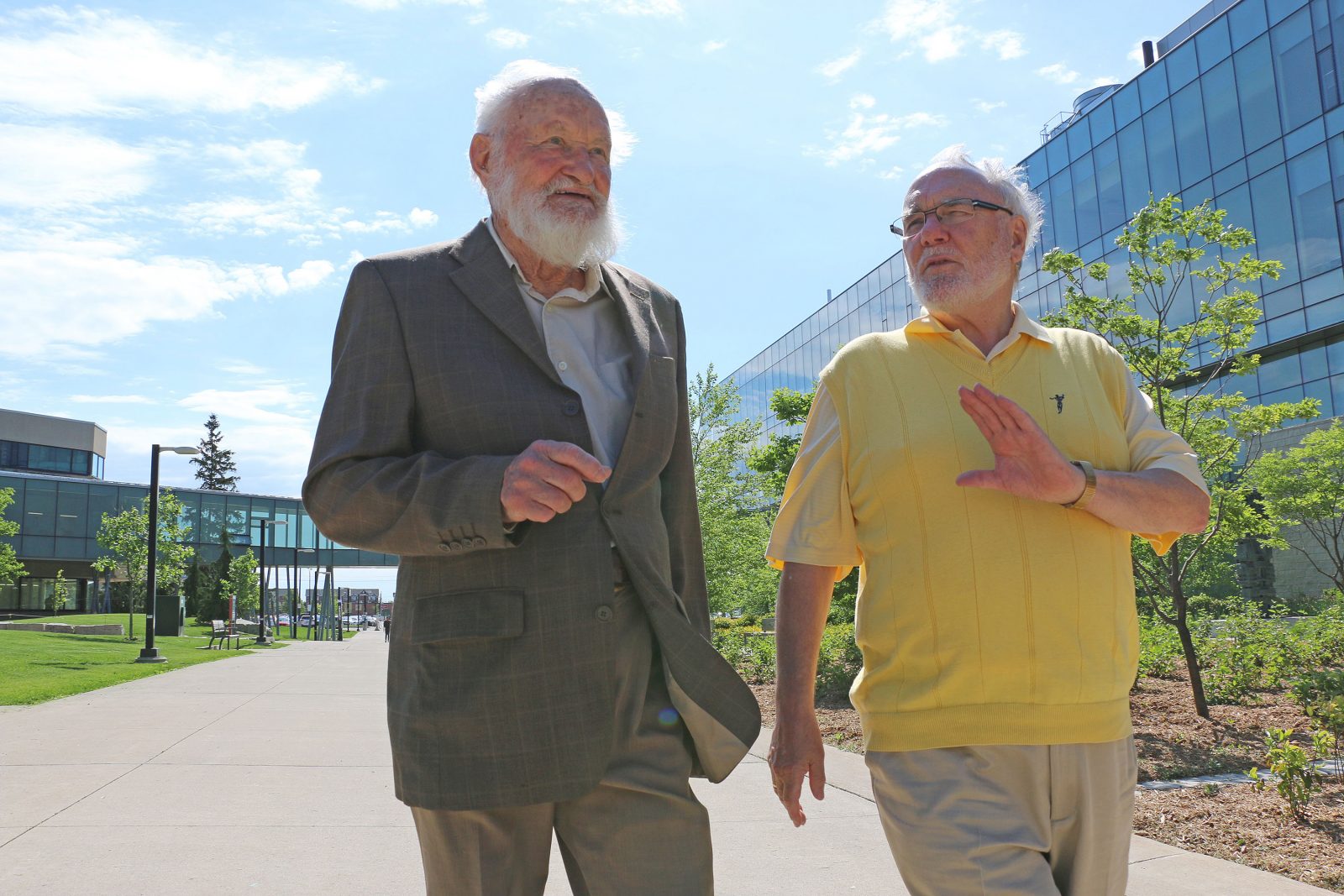 Robin Guard with his friend and classmate Allan Edgington.

Robin Guard, 93, and Allan Edgington, 74, have spent nearly a century watching history unravel before their eyes — and the past few years closely studying it at Brock University.

The friends convocated together Friday, completing the Master of Arts in History program. When they did, Guard (BA ’15) made history by becoming not only the oldest graduate of the program, but also the oldest in the University’s history. 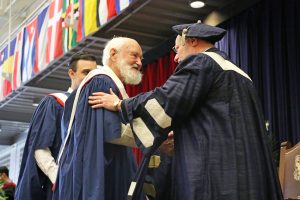 As his name and record was announced during the Faculty of Humanities Convocation ceremony Friday, the crowd applauded and gave Guard a standing ovation.

Guard became immersed in history at Brock after a long career as an electrical engineer, first in the U.K., working for the Atomic Energy Authority at the world’s first nuclear power station, and later in Montreal.

After retiring in 1979, he and wife Barbara bought a farm on Effingham Road in Pelham, where they took up organic farming and kept sheep for more than a decade.

Following his wife’s passing, Guard learned that as a retiree he could take free classes at Brock. He seized the opportunity to explore humanities.

“It’s good to be a specialist in something,” he says, “but you do need to know the rest of the world. Retirement is an opportunity to do that.”

Edgington (BA ’15) had no expectations when he began his undergraduate study of history at Brock in 2007.

The 74-year-old St. Catharines resident wasn’t sure how he would fit in as a mature student, but he built close friendships with two other seniors, Guard and Pat O’Hara (BA ’07, BA ’16).

The trio, who call themselves the “Three Old Farts,” met up weekly for conversation and support. They also reached out to younger students, helping and mentoring the fresh-faced academics as they learned their way around Brock and the university environment. 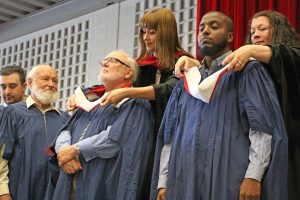 Robin Guard, left, looks on as his friend Allan Edgington.

“We didn’t feel we stood out,” Edgington says as he reflects on the trio’s time at the school.

Edgington spent his career in business and banking in the U.K. and Canada, but had always had an interest in history.

His eldest son prompted him to come to Brock and pursue formal study in retirement.

While he was used to making presentations in his previous career, Edgington found the classroom a different dynamic.

“It taught me a collegiate way of looking at things,” he explains. Rather than dominating as he had in business meetings, he learned in seminar to sit back and ask questions.

Edgington and Guard brought colour and life to Professor Renee Salhany’s class on the history of drinking cultures and challenged her to be a better teacher.

“They could speak from experience about the things we were reading,” said Salhany, “most memorably about London’s pub scene in the 1950s and 1960s. It was such a marvellous check on the class’ assumptions about how much some historian with a PhD could actually know about something they hadn’t lived.”

“Brock’s Department of History and Faculty of Graduate Studies provided key resources and ongoing support throughout Robin’s studies that helped him meet the challenges of grad school.” 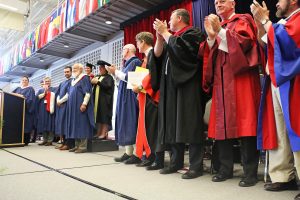 Robin Guard was given a standing ovation when it was announced that he was Brock’s oldest-ever graduate.

“But to our young History MA students, Robin was more than that,” adds Vlossak. “He was also one of the last inhabitants of another time, of a past world that in many ways seems so foreign to our own. But he is more than just a historic relic. He has kept up with the revolutionary changes that he has witnessed over his lifetime.”

“Brock opened up an avenue of the many things you can do,” Edgington says. “It creates a different universe for you (in retirement).”

He took time off during his studies to travel and even studied in India for a semester in 2013. He also travelled to Oxford and Manchester in England for his MA research.

“Try to communicate with an older person in class because they may be a good help to you. Try to use some of the knowledge that older people have.”

He offered similar advice to seniors, urging them to consider academics in retirement. 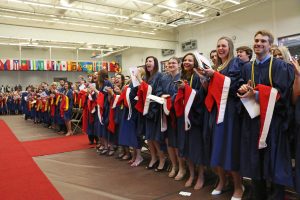 Robin Guard was given a standing ovation when it was announced that he was Brock’s oldest-ever graduate.

“Don’t be scared of coming to Brock,” he says, “There’s absolutely no reason to be afraid. Talk to your professor, your TA, other people if you have a problem.”

The two men may be done their MA degrees, but they’re not done with learning.

Edgington hopes someday to turn his MA research on Yorkshire Methodism into a book and has a bucket list of future research projects.

Guard plans to return to Brock to take science courses.

As Edgington says, the key to success is the desire to learn.