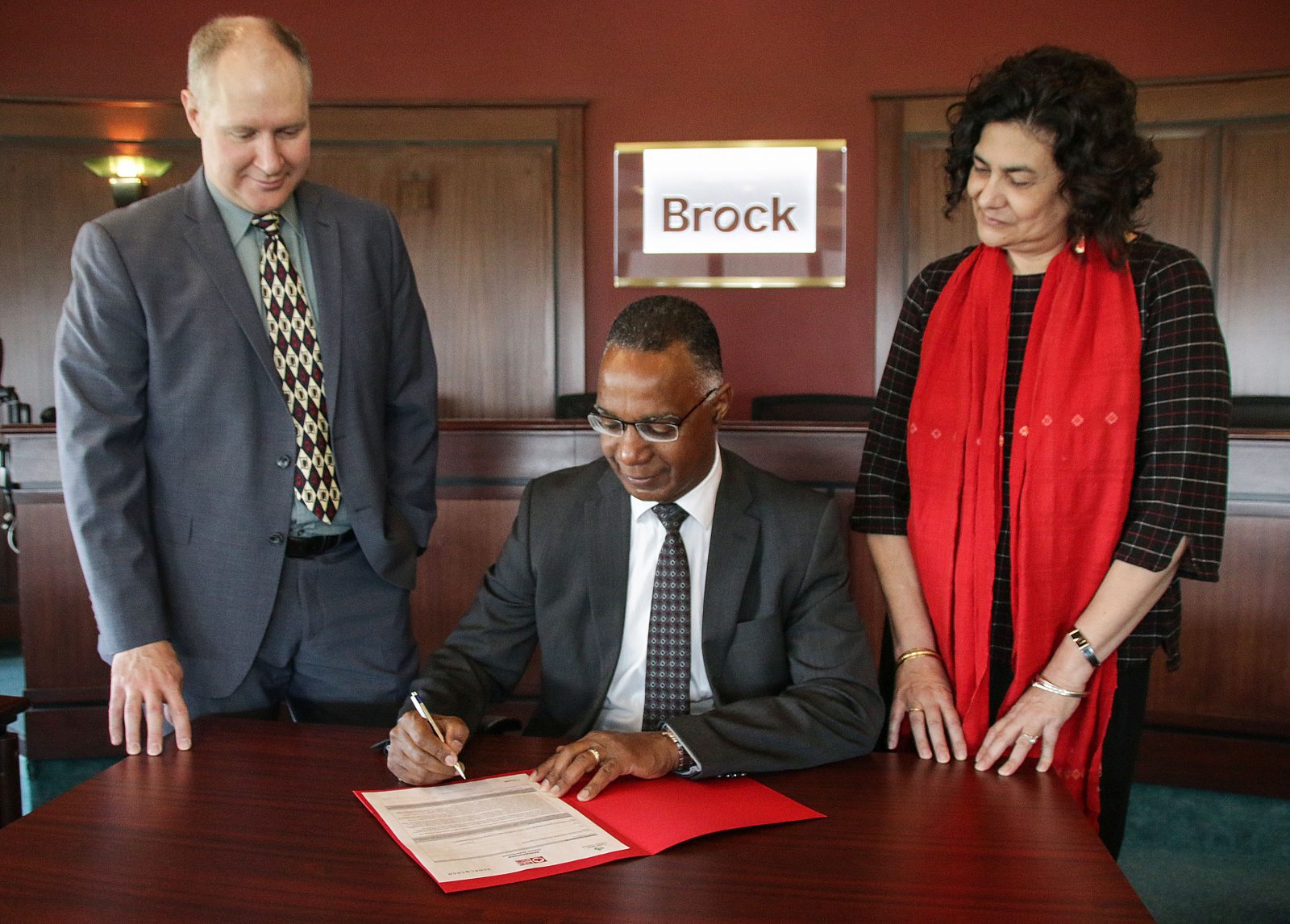 Brock University has reaffirmed its commitment to foster a culture of inclusivity, accessibility, reconciliation and decolonization through its endorsement of a new nationwide charter.

The Dimensions: Equity, Diversity and Inclusion Canada pilot program and charter was announced last week by Federal Minister of Science and Sport Kirsty Duncan. Inspired by the United Kingdom’s Athena SWAN program, Dimensions EDI is focused on addressing barriers in post-secondary research particularly faced by members of underrepresented or disadvantaged groups such as women, Indigenous peoples, persons with disabilities, members of visible minority or racialized groups and members of LGBTQ2+ communities.

On Thursday, May 16, Brock University President Gervan Fearon, along with Vice-President, Research Tim Kenyon and Leela MadhavaRau, Director of Brock’s Office of Human Rights and Equity, signed the Dimensions charter, committing the University to following the EDI principles and implementing actions to achieve the program’s goals.

“The commitment to follow the principles of increased equity, diversity and inclusion aligns directly with a key pillar of our Institutional Strategic Plan,” said Brock President Gervan Fearon. “The Dimensions program is an important guide for the future of post-secondary education and speaks to the outstanding society we are all building together as Canadians.”

MadhavaRau agreed, saying that Brock has already laid the EDI groundwork through its Strategic Plan.

“I don’t think this will be as difficult as if we were coming from point zero,” she said. “Brock is already moving along this trajectory, which is a positive thing.

“But for me it’s exciting. Having a national framework means we can look to our peers who are doing work in a similar vein and exchange best practices, and it makes for greater accountability because we have university presidents in alignment with the national strategy.”

Brock’s commitment to following the EDI principles is detailed in the Brock University EDI Action Plan, which can be found on the Research at Brock website.

The plan was initially developed in 2017 through engagement and discussions with stakeholders across the University around the existing processes and policies, as well as best practices in ensuring equity in the workplace.

The Action Plan is co-ordinated through the Vice-President, Research and is updated each year. Brock’s strategy consists of a combination of broad and targeted communications, engagement with key stakeholders and ongoing training.

Kenyon said EDI is important “for reasons of natural justice, because access to opportunities in academic careers have historically been reduced for Indigenous people, women, visible minorities, persons with disabilities and other equity-seeking groups.”

“However, EDI is also essential to core academic values,” he said. “Supporting the strongest science, scholarship and creative activity at universities means drawing on the gifts and insights of all Canadians. By identifying and mitigating systemic, institutional or unconscious biases against full participation in academic inquiry, we ensure the largest and most diverse pool of talent and ideas.”

Duncan also announced an upcoming Dimensions awards pilot program for post-secondary institutions wishing to attain greater recognition for their EDI work. Kenyon said Brock is looking forward to getting more information on the program to see if it would be eligible to take part.