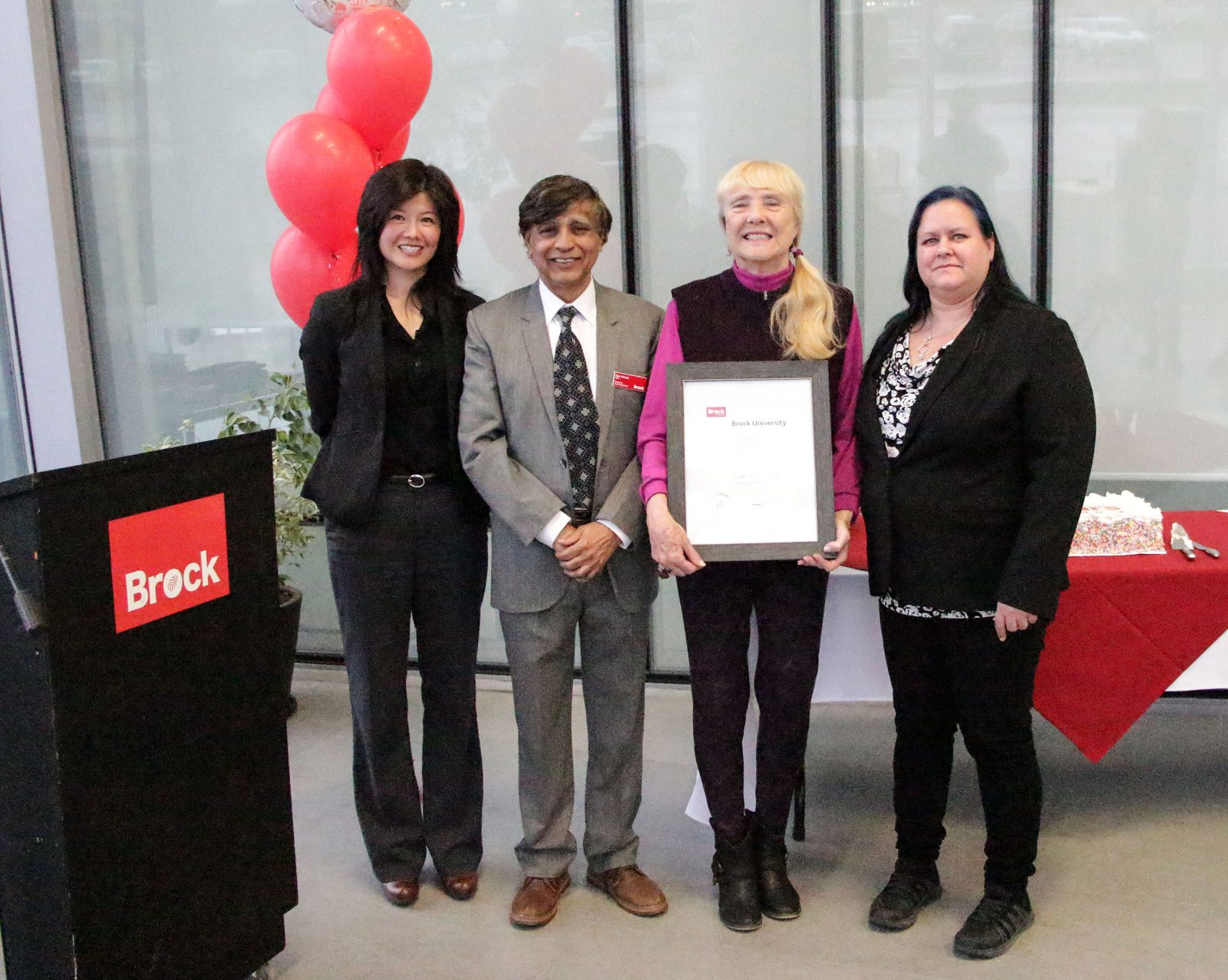 Learning Skills Specialist Gail Neff has played a pivotal role in organizing Scientifically Yours since its inception at Brock 30 years ago.

And at a recent celebration marking the milestone year, it seemed only fitting that she be recognized for her contributions to the conference that encourages young people to continue their studies and pursue careers in science-related fields.

The Faculty of Math and Science commemorated decades of success at the Scientifically Yours 30th Anniversary Appreciation Reception on Tuesday, April 16.

Launched in 1990, the two-day workshop allows Grade 10 and 11 students to learn about science in a University setting, participating in projects that include hands-on laboratory experience, recreational activities and networking sessions with professional scientists.

Neff, who works out of Brock’s A-Z Learning Services, has been a key contributor to the conference’s overall success.

To recognize her efforts, it was announced at the reception that an entrance award once named after the conference would now bear Neff’s name.

Participants who complete the program will be eligible to receive the Gail Neff Scientifically Yours Award, which provides $500 to students who enrol at Brock University directly out of high school with an average of 80 per cent or higher.

“Gail’s dedication has made a difference in the lives of so many students and all those who are involved with Scientifically Yours,” said conference co-chair Christene Carpenter-Cleland, who announced the name change alongside co-chair Poling Bork. “By naming this scholarship after her, she will be forever-linked to this program.”

It was a moment that Neff didn’t see coming.

“This was a total surprise,” she said. “I am doing what I enjoy, and to get an award for that is truly amazing.”

Tuesday’s event brought together Scientifically Yours supporters from the past and present including donors, mentors, secondary school principals and alumni to the Scotiabank Atrium.

During his opening remarks, Ejaz Ahmed, Dean of the Faculty of Math and Science, reflected on the program’s history and impact.

“As a Faculty that prides itself on the student experience, Scientifically Yours provides mentoring and unique learning opportunities that instill confidence in students, and most importantly encourages them to attend university,” he said. “We see our students as an investment in the future and know that programs like this can help them in reaching their full potential.”

Guests also spent time touring one of Brock’s labs and a display room that highlighted photos and memorabilia from the program’s past.

Scientifically Yours was created by Arthur Houston, former Dean of the Faculty of Math and Science, and the Status of Women in Science Committee to promote STEM (science, technology, engineering and math) to female students and increase the interest in science and math.

The Faculties of Social Sciences and Applied Health Sciences were later brought into the fold in 1992 and 1999 respectively. While the program was originally created for female students in Grade 11, it was later expanded to include all genders in 2015 and Grade 10 students the following year.

Since its inception, more than 1,500 secondary school students have attended the conference, many of whom have gone on to further their studies at Brock.

On average, 50 per cent of students who attend Scientifically Yours apply to the University.

This year’s Scientifically Yours conference takes place May 9 to 10. Registration is open until Tuesday, April 23.