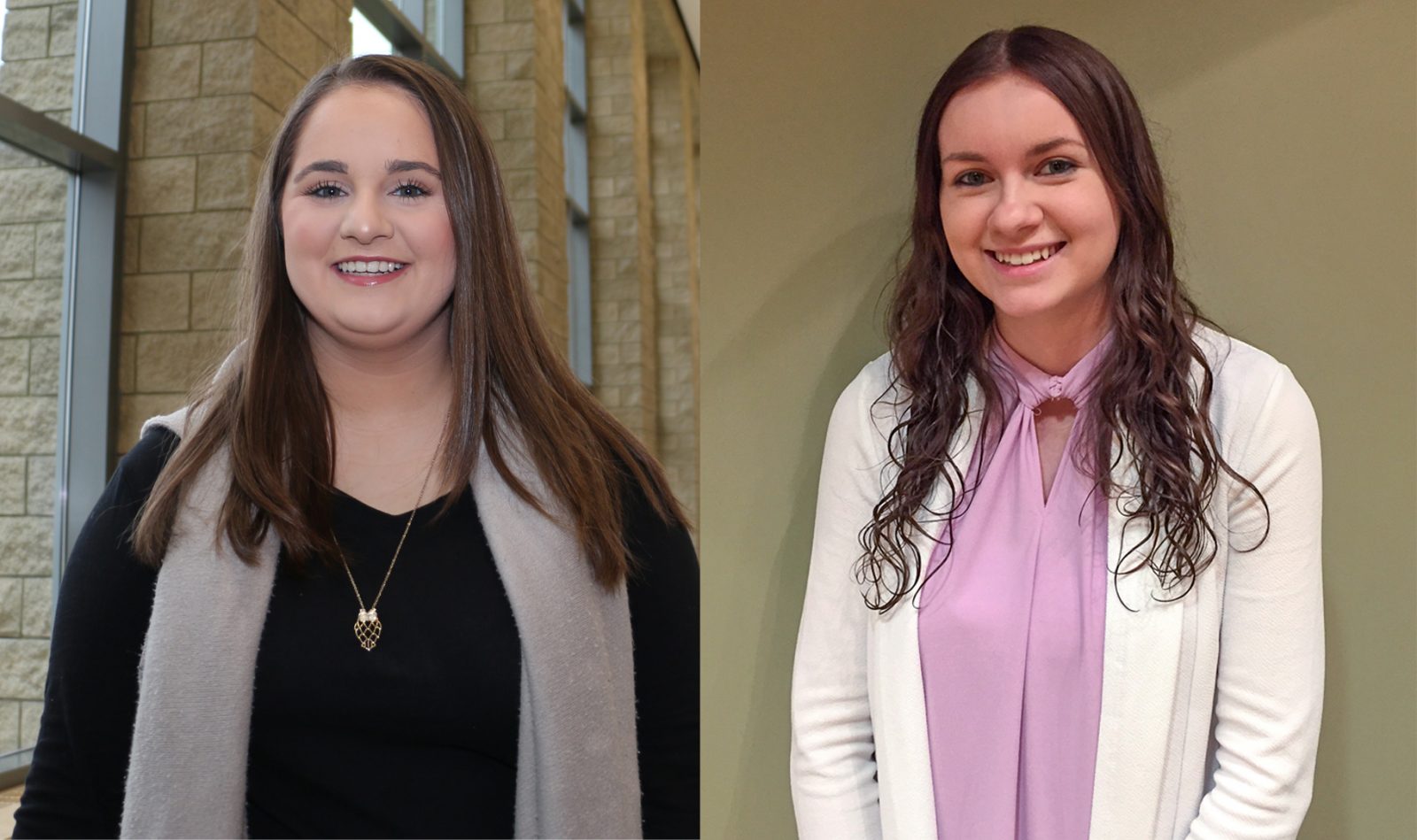 From the first day of her work term, Rachel Van Herk was hooked.

Though the 22-year-old Mitchell, Ont., native was passionate about mathematics, she was unsure how to channel her studies into a career. However, that changed when she was introduced to data analytics during a co-op work term at Meridian Credit Union.

Three work terms and three cities later, Van Herk has now completed her studies, begun a full-time job in her field and is one of two Brock students — along with fourth-year Communication, Popular Culture and Film (CPCF) student Stephanie Lasica — to receive an award from Education at Work Ontario (EWO) for her outstanding efforts.

The awards are presented annually to two university and two college students across the province.

The announcement of the EWO awards comes at the beginning of National Co-op and Work Integrated Learning (WIL) week at Brock, which celebrates the many successes and promotes awareness of co-op and experiential learning programs.

Cara Krezek, Brock’s Co-op, Career and Experiential Education (CCEE) Director, said the pair’s top finish kicks off the week’s events with a great example of the calibre of the University’s students as well as the supports they receive.

“Seeing both students recognized at the provincial level is an amazing accomplishment for Brock,” she said. “Their hard work, combined with the support of so many people across campus, has shown just how impactful our co-ordinated efforts to support student success can be.

For Van Herk, who is among the 15 per cent of full-time Brock students to take part in co-op studies, the successful work terms would not have been possible without the support of Brock’s CCEE team.

“They are very supportive of their students,” she said. “They prepared me for interviews, contacted connections and did everything they could to help me find my fit in the field of analytics.”

For her last co-op work term, Van Herk put her analytics skills to the test at Canadian Tire Financial Services, where she worked on a project to help better the results of Canadian curling teams through the corporation’s partnership with the not-for-profit organization Own the Podium.

It was while developing her new curling analytics metric that Van Herk was nominated by her supervisor for the EWO Co-op Student of the Year award. She later learned she was chosen for the honour, which will be presented at Brock’s Community Partner Recognition and Appreciation Event on April 9.

“I am humbled and honoured to receive the award and to get to represent Brock’s Faculty of Mathematics and Science on a provincial level,” she said. “It wraps up my degree and my time at the University really well and reinforces the great things I tell students when they are thinking of studying here.”

Like Van Herk, Lasica also earned a provincial nod from EWO while exploring her career options.

Lasica is taking part in CPCF’s This is my Niagara initiative, an eight-month experiential education internship that allows fourth-year students to engage in event planning, digital marketing initiatives, desktop publishing and branding of events for small- and medium-sized businesses.

Thanks to her outstanding efforts co-ordinating events, such as the Grant Dobson Case Competiton and Terry O’Malley Lecture, the 21-year-old student from Etobicoke has been awarded the EWO Work-Integrated Learning Student of the Year award.

Along with the prestige of winning a provincial award, Lasica is thankful for the experience she has received during the internship.

“I learned a lot of practical skills about the field of communications, but the exercise also taught me a lot about myself,” she said. “I am now more confident to work with teams and peers in the workplace, and I find it valuable to learn from and alongside people of many different backgrounds to deliver the best result for our projects.”

Lasica, who is preparing to pursue postgraduate studies in public relations, knows the awards she and Van Herk won are reflective of exceptional individual efforts as well as the University’s emphasis on co-op and experiential learning across all Faculties.

“The entire Brock community and all of the resources here on campus have helped me get to this point,” she said. “It’s important that the Experiential Education team is recognized as well as the Co-op team. Having both of our accomplishments on the same level shows that co-op and experiential education are incredible resources for students.”

As she begins her full-time career as a credit reporting analyst at Meridian, Van Herk hopes other students will follow the example she and Lasica have provided by embracing Brock’s co-op and experiential opportunities.

“Taking part in co-op or experiential exercises is the best decision you can make,” she said. “It takes commitment, but it also helps you gain valuable experience and connections and is extremely worth it. By the time you’re done, you’re much more prepared to take your next steps.”

In addition to her EWO honours, Lasica won the University’s Experiential Education Student of the Year award, while Van Herk has received Brock’s Co-op Student of the Year award. The latter honour was also presented to Bachelor of Business Administration student Josiah Dueck, who completed his work term at Business Development Bank of Canada, and Master of Business Administration student Pradeep Kirani, who completed his work term at FedEx Express Canada.

All of the award winners will be recognized at the Community Partner Recognition and Appreciation event on April 9.