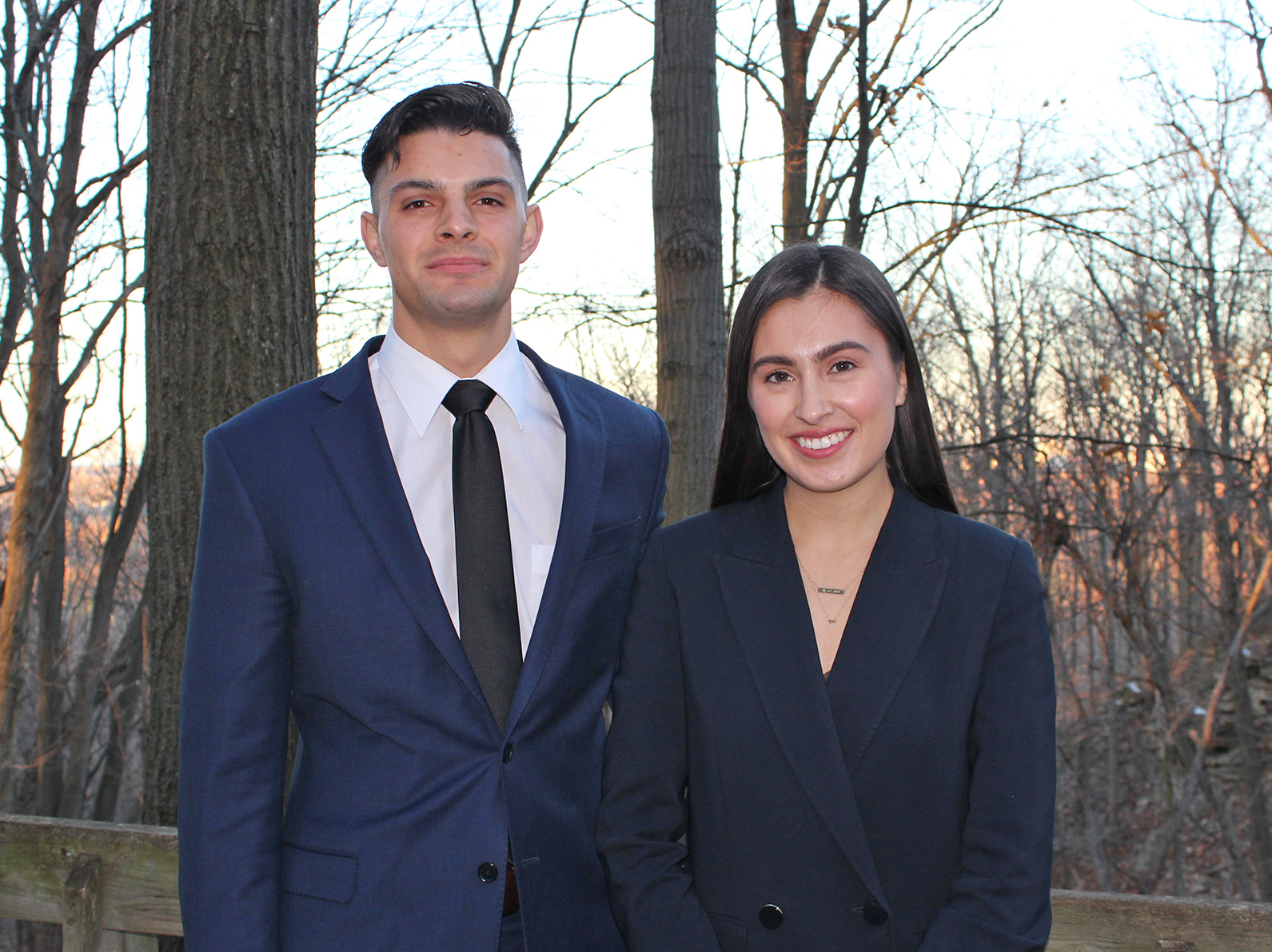 As soon as Julia Baird-Oryschak heard that the Grant Dobson Case Competition was open for entries, she knew who she wanted as a partner.

“I immediately called Bryan,” said the Brock student, who is in her third year of a dual BBA and International degree.

The annual competition is part of the Terry O’Malley Lecture in Marketing and Advertising and invites students to showcase their creative and presentation skills to a panel of industry experts.

Baird-Oryschak teamed up with Bryan Haakman, a fifth-year BBA co-op student, reconnecting after working at a co-op placement together in Toronto over the summer.

After listening to the three finalist teams make their pitches on Thursday, Nov. 22, the panel named Baird-Oryschak and Haakman, and their fictional luxury brand campaign ‘Elevate,’ the winners of this year’s Dobson competition.

Both team members started out in small-town Ontario, but they have international aspirations. In January, Baird-Oryschak leaves for Germany, where she will finish her degrees. Haakman plans to complete his degree in Singapore. They agree that their participation in the Dobson Case Competition was a great opportunity to gain real-life marketing experience.

“The competition allowed me to apply what I learned in the classroom,” said Haakman.

After presenting in an earlier round of competition, the field was narrowed down by faculty members from the Department of Communication, Popular Culture and Film and the Goodman School of Business.

In the finals, the teams were judged by a panel that included Peter Shier, President of Naked Creative Consultancy, Lynn Fletcher, owner of Fletcher Weir Consulting, Mark Smyka, an independent marketing communications consultant and Greg Plata (BSM ’08), Director of Strategy and Brand Development for Naked Creative.

Shier, who wrote the cannabis brief the teams used to come up with their pitches, also delivered this year’s Terry O’Malley Lecture in Marketing and Advertising.

“You’re not just here to make a presentation,” he told the competitors later in his feedback. “You’re here to tell a story.”

The judges remarked on the high calibre of the presentations.

“That allowed us to be completely honest with our feedback to one another as we prepared,” Sethumadhavan added. “I highly encourage other students to step out of their comfort zones and get involved in the Dobson Case Competition. Even if you don’t want to present, you can volunteer. It’s a great experience.”

Hosted by the Department of Communication, Popular Culture and Film since 2005, when it was created by Sharon Broderick of the Goodman School of Business the Grant Dobson Case Competition is named in memory of Dobson, who served as the Executive Director of the Office of External Relations at Brock University.