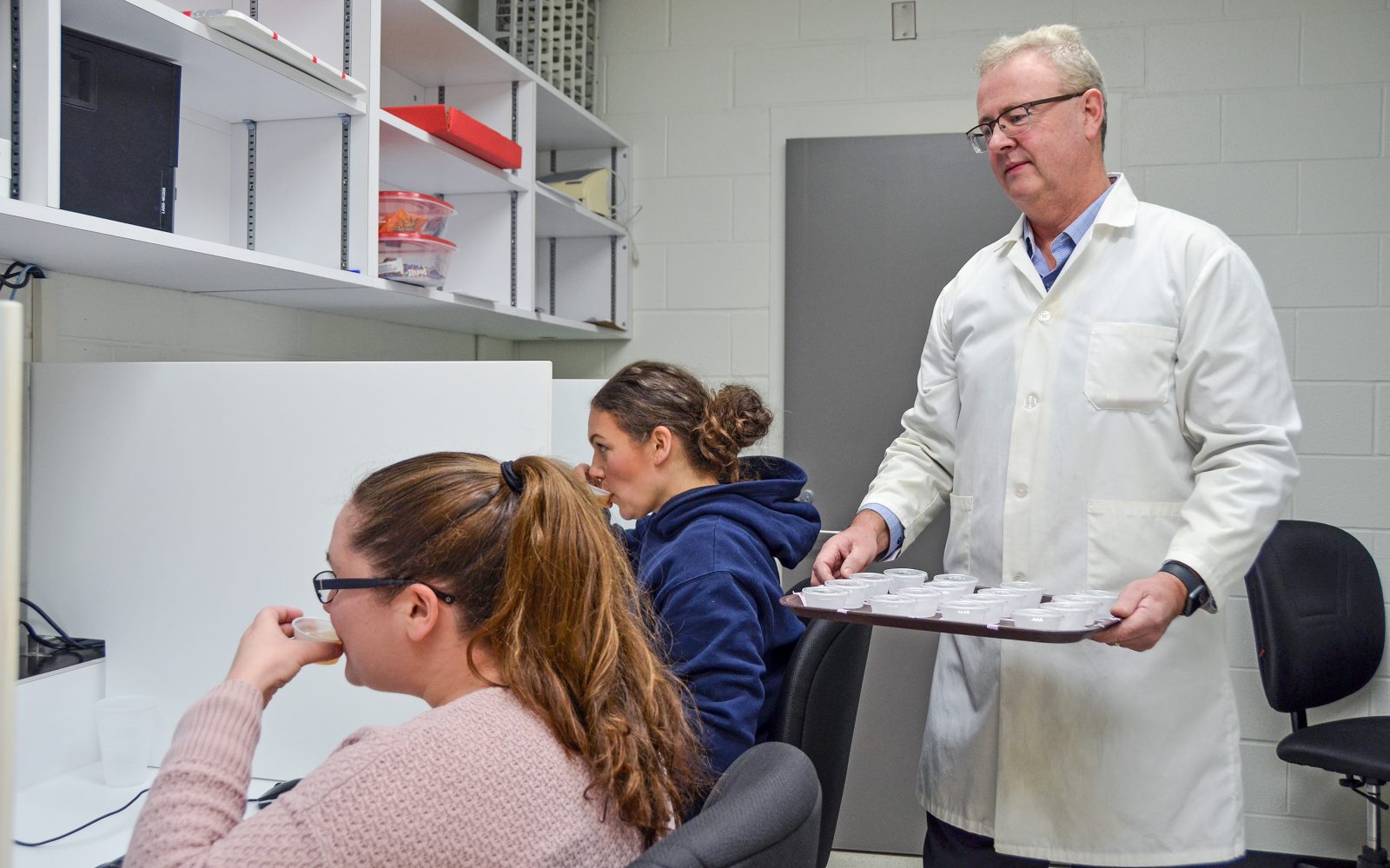 Professor of Biological Sciences and Psychology Gary Pickering (right) looks on as PhD candidates Margaret Thibodeau (left) and Jennifer Kelly (centre) identify flavours in beer samples. Research participants identified as being thermal tasters reported beer tasted bitter and sour at a higher rate than regular tasters. Thibodeau, one of the study's authors, will be doing additional research on how thermal tasters perceive ethanol.

Beer lovers widely agree that while the world’s most popular alcoholic drink can be slightly bitter or mildly sour, it’s pleasant overall. But for about 20 per cent of the population, beer is uncomfortably bitter and sour, a Brock University research team has found.

‘Thermal tasters’ are people who experience bitterness, sourness, astringency and other non-sweet flavours at a highly intense level. These tastes come out after the food or drink is swallowed, with the aftertaste lingering for up to two minutes.

“When we put a small probe on the tongue of someone who is a thermal taster and change the temperature, they taste bitterness or sourness, in effect, a ‘phantom taste’ because the taste comes from a temperature change to the tongue rather than food or drink,” he says.

In this latest research, published in the peer-reviewed journal Food Quality and Preference, 117 participants were asked to identify what they were tasting as they drank cold and warm samples of Molson Exel. They could choose any number of seven descriptors: astringent, bitter, carbonation, fruity/hops, malty, sour and sweet.

A non-alcoholic beer was chosen for the trials so participants could swallow the drink (important for experiencing the full range of taste sensations) without their ratings or judgment being affected by alcohol, Pickering says.

As an added twist, the participants in one of the trials listened to an audio clip of a can of cold beer being opened to see if that sound would enhance the sensation of carbonation during the tasting process.

Participants were also tested to identify who were thermal tasters among the group.

The researchers found that participants identified as thermal tasters reported the beer tasted bitter and sour at a higher rate than regular tasters, and they detected astringency and carbonation in cold beer more than warm beer.

Pickering explains that the addition of the sound clip is part of a growing research area called cross-modal interactions, which examines how one sense (in this case, hearing) may interact with another (in this case, taste) to alter how consumer products are experienced. Another example would be colouring a product yellow if the manufacturer wanted it to taste more sour and citrus-like.

“The cross-modal direction we were interested in was how sound might affect perception of beer,” he says.

Also, thermal tasters’ ability to perceive flavours just by changing the temperature of their tongue might be a result of “cross-wiring” of taste nerves and trigeminal nerves in the oral cavity, says Pickering.

Taste nerves respond to sweetness, sourness, bitterness and other flavours, while trigeminal nerves are responsible for the sensations such as hot, cold and spiciness experienced when eating and drinking.

“Thermal tasting may be a proxy for general taste sensitivity,” he says.

Pickering says thermal tasters’ heightened sensitivity to bitterness and sourness “may be protective against alcohol misuse,” as thermal tasters would be less likely to start, or continue, drinking, since many alcoholic beverages would elicit these tastes at unpleasant levels.

He says the research results might also have implications for breweries and marketing experts, and that further research might explore how beer could be optimized for individuals such as thermal tasters who have different taste sensitivities.

“This research highlights that many factors influence flavour,” says PhD candidate Margaret Thibodeau, who is one of the study’s authors.

“More research is required to better understand the perception of alcoholic beverages,” she says.

To that end, Thibodeau is conducting another study that examines how thermal tasters perceive ethanol – the active ingredient in alcoholic beverages – compared to non-thermal tasters.

She is looking for female volunteers ages 19 to 40 to participate in that study. For more information, email mt10xw@brocku.ca