Staff mark 20 years together at Brock 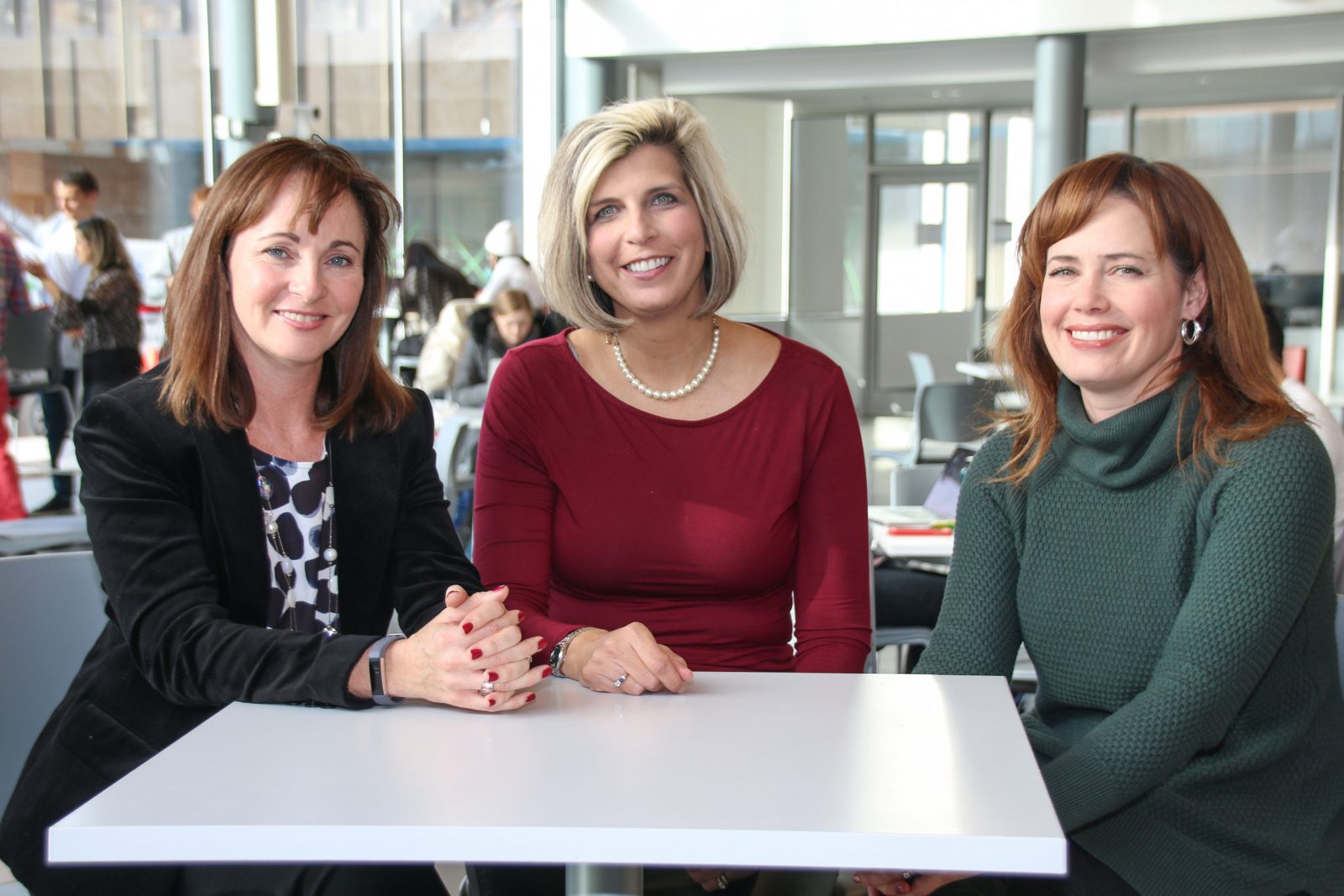 Melissa Beamer, Alison Lahn and Kara Kelly celebrated 20 years of service this year. The three began their Brock careers together as contract recruitment officers in 1998.

For three Brock staff members, the 20-year journey of employment at the University began with a literal trip into parts unknown.

“Back then, we didn’t have Google Maps or GPS in our cars,” said Beamer (BA ’98, MEd ’10), who along with Kelly (BA ’98) and Lahn (BA ’95, BA ’01, MEd ’10), worked as a recruitment officer for Brock’s Office of Recruitment and Liaison in the late 1990s. “I had to use this huge map book to find my way to high schools to conduct presentations. What’s worse is that sometimes the books were out of date, so I’d find myself lost on a new street that wasn’t on the map. I had to go into gas stations to ask for directions.” 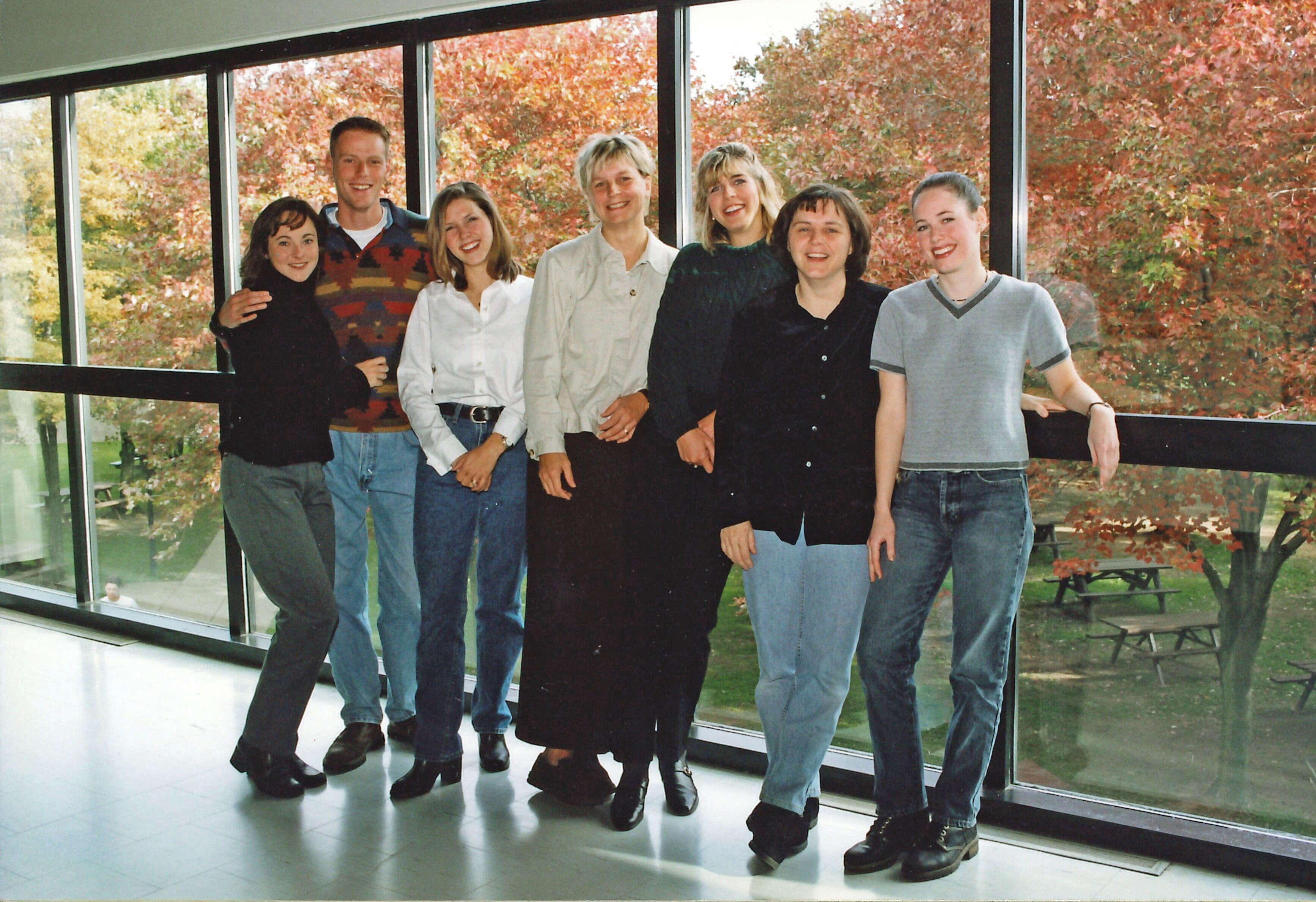 In August, Beamer, Kelly and Lahn celebrated their 20-year anniversaries of working at Brock. The three started as contract recruitment officers at the same time, all unsure of where their careers would take them.

For Beamer, now Senior Manager, Employer Development in the Co-op, Career and Experiential Education (CCEE) office, the recruitment officer position was a temporary opportunity for skill development. While studying Politics and Psychology at Brock, Beamer aspired to be a lawyer and had taken a part-time student role at a law firm.

“It took me about a year of working in the legal field to realize that I didn’t like it,” she said. “It took another year for me to hate it, and a third to admit to my family that I didn’t want to do this anymore.”

“They recommended the recruiter job to me,” said Beamer. “I thought it would be a great opportunity to travel, promote a school I love and figure out what I wanted to do with my life.”

She took the job thinking it would be temporary — but Beamer never left. Her contract was extended, her role changed over time and eventually, she left Recruitment and Liaison for a role with CCEE.

“It was happenstance,” she said. “What happened to me is exactly what we talk about in CCEE. You have to take advantage of the opportunities that present themselves and just roll with it. That’s how circumstances turn into great careers.”

Like Beamer, Lahn didn’t think she would have a lifelong career at the University. She is now an academic advisor with the Department of Child and Youth Studies.

“When I first came to Brock, I wanted to be a teacher. Then I changed my mind and wanted to be a speech language pathologist,” said Lahn, who after graduating from Brock with a Child Studies and Psychology combined degree, enrolled in the University’s Linguistics program.

She had been working as a tour guide the summer of her second degree. After her contract was complete, she was encouraged to apply for a four-month recruitment officer contract.

“It was a great time to work in recruitment,” she said. “It was a small, close-knit team. We would have deep philosophical conversations throughout the day. The university fairs were much smaller too.”

Back then, about a dozen people from the recruitment team and the scholarships office would stand around waiting for students to approach them. Today, there are more than 250 people from Brock involved with the Ontario Universities’ Fair each year.

“Our display was not what it is today,” Beamer said. “It was just a wall of folding panels we put together with some photos on it.”

After her four-month recruitment contract was complete, Lahn learned about an opportunity to work in the Registrar’s Office doing pre-service admissions. From there she secured a permanent role in Student Awards and Financial Aid. After working as a scholarships officer for a couple of years, she learned about an academic advisor position in Child and Youth Studies, a role she has held for the past 16 years.

“My dreams were much different than when I entered Brock,” said Lahn. “You don’t come to university wanting to become an academic advisor. It just developed that way. I tell the students I work with about the different paths in life and not knowing where they may take you. I’m a perfect example. I love my job, the people and working in this environment.”

Like Beamer, Kelly’s initial contract with Recruitment and Liaison was extended and she was eventually offered a permanent role. With a Brock degree in Politics complete, her initial plans to work the four-month recruitment officer contract and then pursue a post-graduate certificate in public relations never came to fruition.

But it all worked out. As the department grew, Kelly and Beamer had several opportunities to develop their skills and get involved in different projects.

“We essentially created our own positions by building on our natural skill sets and dividing the work accordingly,” said Kelly. “It was an amazing opportunity to work independently and gain new experiences. I had my very first flight as a recruiter.”

Now, as Manager, Recruitment Operations and Communications, Kelly is closely involved with how recruitment officers pitch the University at high school presentations and university fairs. She said over the years, marketing and communications has changed significantly.

“It was a much softer-sell when we began,” she said. “We would tell our own Brock story and hope that is resonated with the students. Now, our messaging is much more sophisticated. The experiences of our recruiters are still the focus, but we are able deliver our message in a much more compelling way.”

When Beamer, Kelly and Lahn first started at Brock, there were 9,000 students. Since then, enrolment has more than doubled, with nearly 19,000 attending in the 2018-19 academic year.

To keep up with advancing technology and the expectations of today’s students, Kelly said presentations now include a digital experience and video. Recruiters are also highly trained and equipped to share a vast amount of knowledge about the Brock experience.

“The most amazing part of our time in recruitment was being a part of all of these changes,” said Beamer. “And for me, I gained a best friend.”

Beamer and Kelly have remained close over the years, with each of them standing as bridesmaids in each other’s weddings.

“I don’t know if anyone can really understand what it is like to be a recruiter until they’ve done it,” said Beamer. “You’re travelling on your own and the only people you have to keep in touch with are others who get it. There’s an intensity or closeness there that you don’t get with other positions.”