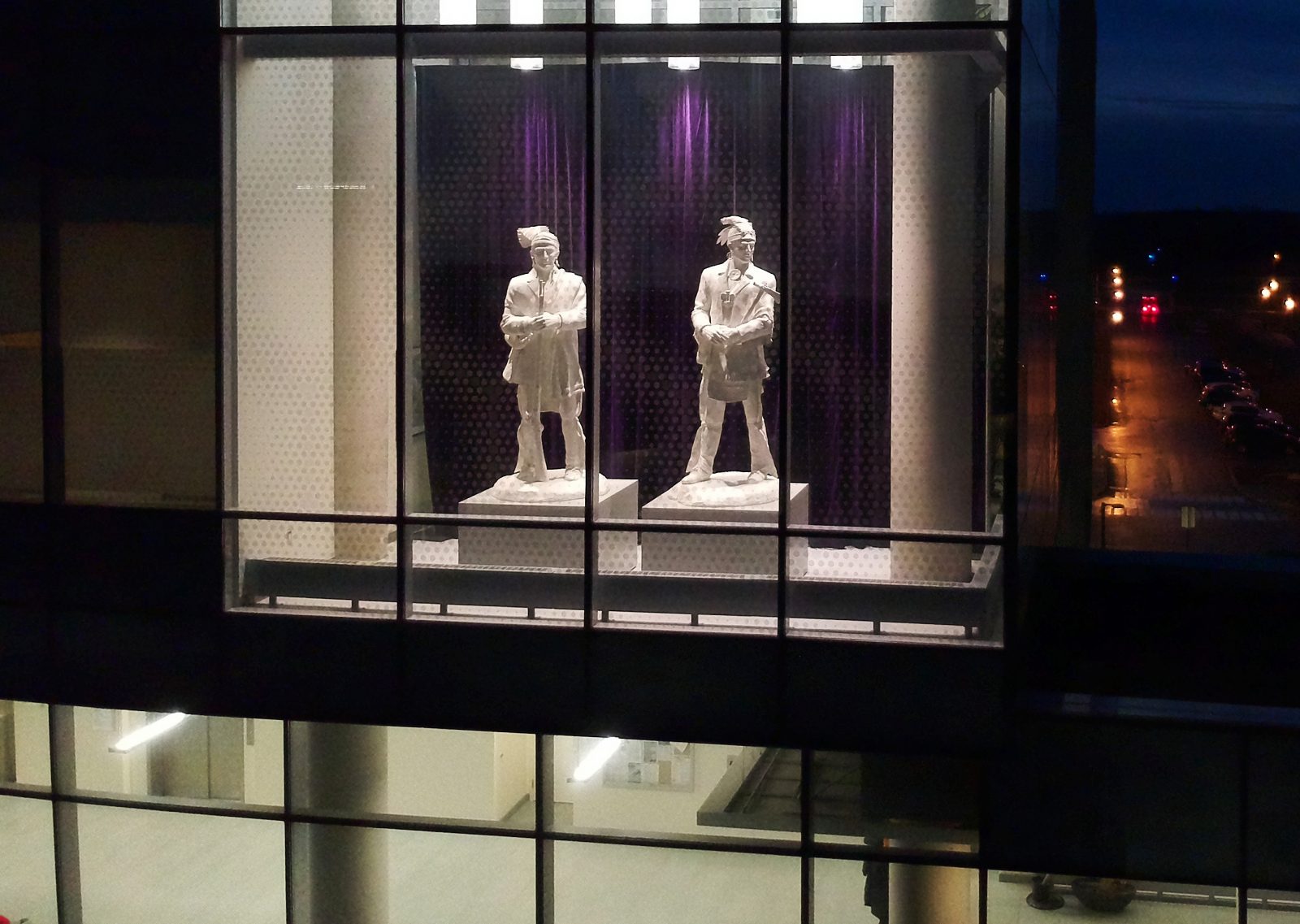 As Michele-Elise Burnett’s eyes turned to look to the fourth floor of the Cairns Family Health and Bioscience Research Complex, they instantly filled with tears.

Looking back down at her from behind the textured glass windows of the building were the paper statues of two Indigenous military leaders who played a key role in the War of 1812 alongside the University’s namesake.

On Friday, Dec. 14, the statues of John Brant and John Norton were unveiled in their new home at Brock, where they will permanently look down over the Indigenous Healing Garden on the north side of the Cairns Complex.

For Burnett, a Brock Board of Trustees member and co-chair of the Aboriginal Education Council, it was an appropriate end to a long journey for the statues. Based off of drawings by Six Nations artist Raymond Skye and created by sculptors Allen and Patty Eckman, the paper statues were used to create the bronze likenesses of Brant and Norton installed in Queenston Heights two years ago for the Landscape of Nations Indigenous war memorial.

“I’m just so excited,” said Burnett, who was part of the Landscape of Nations inaugural committee. “I see it as us coming together as a cross-cultural community and Brock University being committed to move forward in harmony, peace and friendship.

“Every day we can look up and know that a part of our history and Brock’s history is united together and we have a brighter future for tomorrow.”

The statues were previously on display in the FirstOntario Performing Arts Centre in downtown St. Catharines, but when a new home was needed, Burnett encouraged Brock to find a home for them.

“Having these statues on campus that depict two Indigenous leaders and their contributions to the war allows us all to not only learn about that history, but to have their presence in our everyday life,” said Brock President Gervan Fearon. “As we forge forward, this is an important statement about the kind of institution we’re building that’s inclusive of all peoples and in particular Indigenous communities.”

Fearon said the timing was ideal, as Brock is also working to hire a new Vice-Provost, Indigenous Engagement.

“It’s a moment of change and moving forward as a University and demonstrates the kind of environment we’re building here,” he said.

Tim Johnson, Burnett’s co-chair for the Landscape of Nations Commemorative Memorial, said the key role Indigenous peoples played in the War of 1812 hadn’t been recognized until recently.

“Isaac Brock was well aware of and involved in relations with First Nations and their leadership,” he said. “Tecumseh, Joseph Brant, John Norton, John Brant and many others were all within his sphere of engagement. The statues of Norton and Brant will serve Brock University well in its acknowledging that the blank pages of this particular history weren’t necessarily missing, they just hadn’t yet been resolved.”