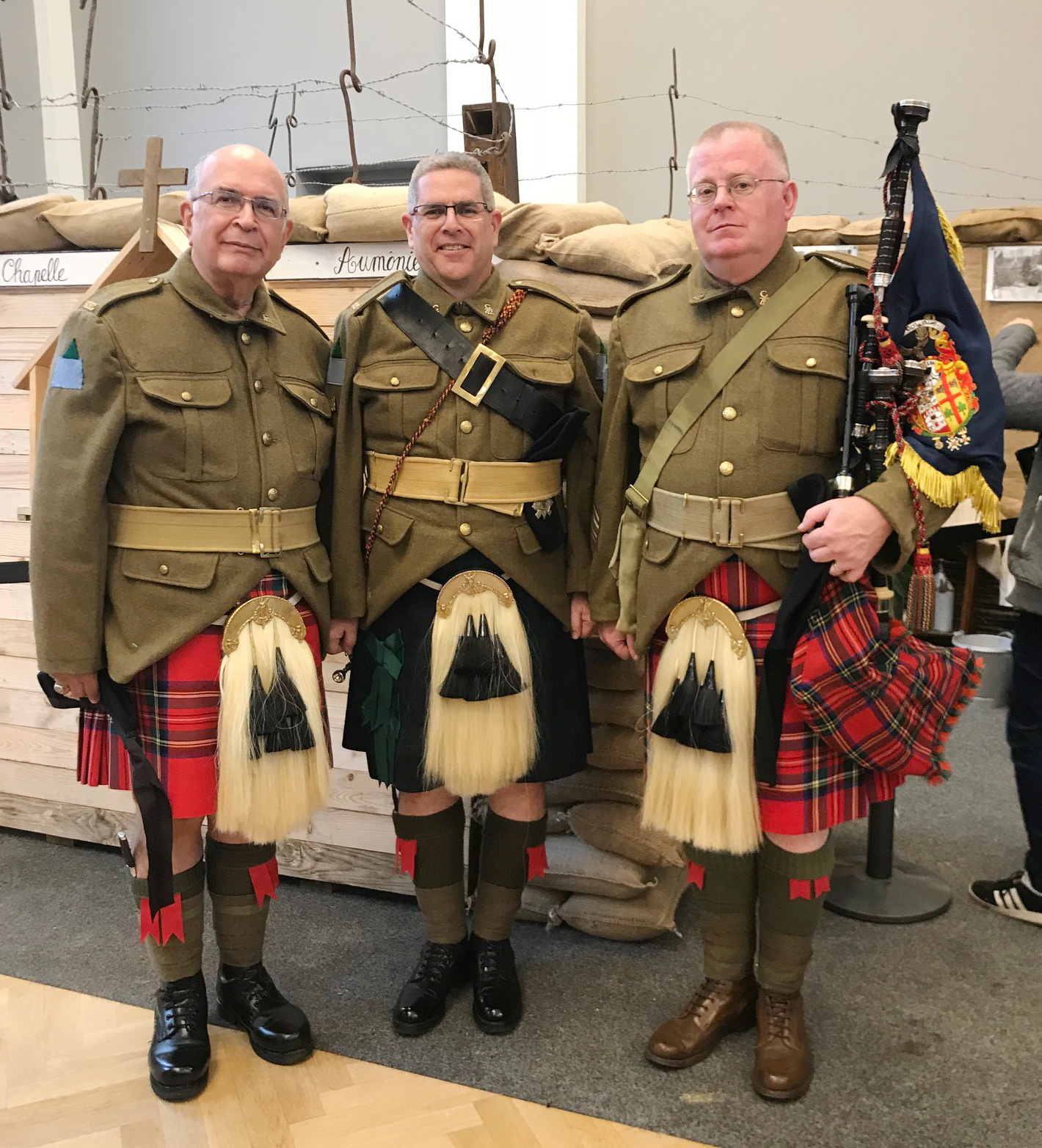 As their bus drove from Brussels to Ypres, Belgium to mark the 100th anniversary since the First World War ended, the delegation of almost 40 Canadians instinctually fell silent as they passed row upon row of white tombstones marking the graves of those who died on nearby battlefields.

“The countryside in this region has more than 170 military cemeteries and reminders of war,” explained Cpl. (retired) Kieran Boyle, Drum Major for the Black Watch Association Pipes and Drums and a second-year Brock Sport Management student who was in Belgium for a memorial re-enactment march by Canadians a century earlier. “Everyone was in good spirits, but as we passed these places, the bus would become quiet in unplanned moments of respect reminding us of the significance of what we were about to do.”

Emotions were already high as a day earlier Boyle and the 42nd Battalion Pipe Band and the Black Watch Association Pipes and Drums had visited the Vimy Ridge Memorial in France.

“Going to Vimy first really set the tone for us to understand the magnitude of the brutality of war and the significance of how Canada’s military contribution changed the war efforts at the time,” Boyle said. “I was a proud Canadian before I went, but after going to Europe in this capacity, my pride is overflowing. I had no idea just how many people come out to these sites every day to pay homage to all of the countries and soldiers who were a part of this.”

Upon arrival in Ypres, a town in the Province of West Flanders, the delegation visited the Menin Gate Memorial where they would be doing the march dressed in re-enactment clothing the following day.

“Each night, people arrive, and traffic is stopped while members of the local fire brigade sound the Last Post in the roadway under the Memorial’s arches,” Boyle said. “This tribute is such a part of the daily life. I overheard local children telling some tourists they needed to stop talking — then it really hit me how much gratitude is embedded in their culture.”

The children and youth held up plaque cards of all the Black Watch soldiers who had been present when the town was liberated from German occupation and sang the Canadian National Anthem in recognition, Boyle said.

“This was a very emotional moment and we really got a sense of how in this town, remembrance for what Canadian soldiers did for them has been passed down over generations. We were all in tears.”

On the morning of Nov. 11, Boyle and the Pipe Band were a part of a Remembrance Day service that was televised on major networks in Canada. The re-enactment march began at Hotel de Ville, where the original Regimental Headquarters was set up, and the Pipe Band led assembled troops down the exact route the regiment took on the same day 100 years earlier before they stopped for official photographs.

The attention to detail for the re-enactment photos even included the devoted Flora Stewart, the Regiment’s goat mascot that was thought to bring good luck to the Black Watch soldiers.

“The story tells of a soldier who adopted a goat as they marched out of Ypres, after having just endured some of the deadliest fighting in the war to date at the time,” Boyle said. “From 1914 to 1918, Flora served as the mascot for the 73rd battalion Black Watch and travelled with them until they disbanded due to high causalities. After the last soldier was transferred out, Flora ate some grass laden with mustard gas and died right there.”

The new Flora was gifted by the local community in remembrance that she was with the battalion from start to finish.

“Flora 2 will remain in Wallers, Belgium, but she is officially a part of the regiment. This entitles her to a regimental blanket, name tag and registration number,” Boyle said.

Of the experience, Boyle said, “It is very difficult to describe, but this has been truly life changing.”

The Return to MONS itinerary also included participation in town parades, putting up a commemorative plaque recognizing the Black Watch Regiment and General Loomis who led the troops. The great-granddaughter of General Loomis was present to unveil the plaque and officially declare the building a historical site. She also presented the pipe banner coat of arms to Pipe Major Andy Kerr, which will live and be used in Montreal.

To learn more about the Mons re-enactment, visit the Black Watch Canada website.