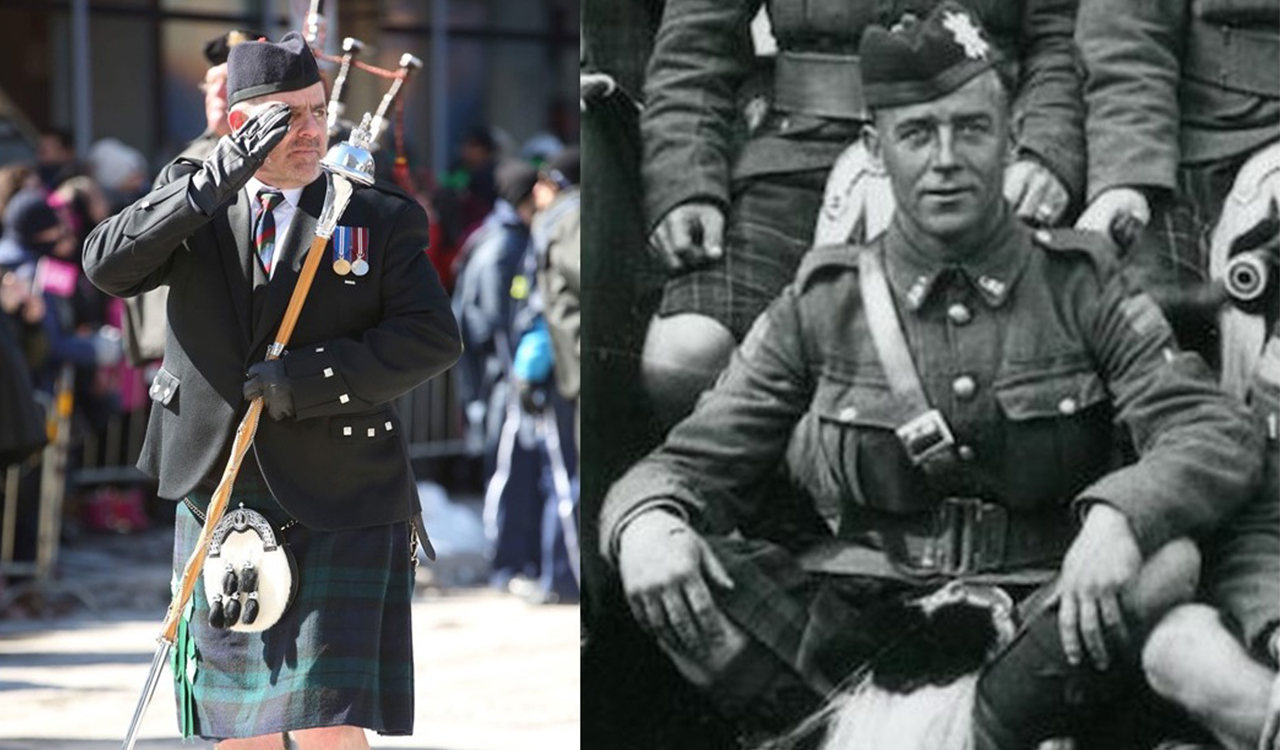 At left, Brock University Sport Management student and Drum Major Kieran Boyle, Black Watch Association Pipes and Drums, marches in the 2018 St. Patrick’s Day Parade in Montreal. At right, drummer David Balfour is pictured after the First World War 42nd Battalion Royal Highlanders of Canada Pipes and Drums marched into Mons, Belgium as the first group after the Armistice was signed on Nov. 11, 1918.

Shortly after the armistice came into effect at 11 a.m. on Nov. 11, 1918 to end the First World War, the Canadian Pipes and Drums’ 42nd Battalion Royal Highlanders marched into Mons, Belgium announcing to the citizens that they had been liberated from four and a half years of German occupation.

On the 100th anniversary of that historic event this Sunday, a Brock University student and retired Canadian Forces member will be part of a re-enactment matching the exact route marched by Canadians a century earlier.

Cpl. (retired) Kieran Boyle, Drum Major for the Black Watch Association Pipes and Drums and a second-year Brock Sport Management student, is currently en route to Belgium to take part in the re-enactment.

“As a Canadian and a veteran, this is an important moment in history to recognize,” said Boyle. “It was Canadian troops who liberated the town of Mons, restored telephone communications and were the first to meet with citizens who came out of hiding to rejoice.”

Boyle, who was just 17 years old when he joined the Canadian Forces, will be wearing an 1918 period uniform and an identity disk representing Canadian drummer David Balfour, who was one of the original 42nd Battalion Pipe Band members who marched into Mons.

Boyle said his family has a long history of military service, and he wanted to continue that tradition.

“My father was a Navy veteran of the Second World War and saw his family and friends suffer as a result. Before he let me enlist, he wanted to make sure I understood the responsibility I was taking on,” said Boyle.

Before enlisting, he was given advice from his father about what it meant to serve with others.

“He spoke so profoundly to me that day. He said ‘if you can’t do your job, you are impacting the entire group. You are not doing this for yourself or your mom, the queen or even the country. You are there for the guys beside you, the ones on the left and right of you,’” Boyle recalled.

In 1985, after being sworn in, Boyle went to Valcartier for infantry training before serving with the Black Watch Royal Regiment of Canada, based out of Montreal until 1999. He also became an infantry medic for the regiment and a drummer, which allowed him to travel with the pipe band to various countries in the Commonwealth Nations.

Historically, being a drummer and piper for the military is a position that holds respect and responsibility.

“In the First World War, before the battles started, the piper was the first one to get out on the trench to motivate the soldiers not to be afraid,” Boyle said. “Sadly, this also meant the piper was one of the first to be killed.”

While in Europe, the 42nd Battalion Pipe Band will be participating in a ceremony in Ypres, Belgium at the Menin Gate Memorial, which bears the names of more than 54,000 soldiers who died and have no known grave. The Canadian Battalion will also attend the Vimy Ridge Memorial in France.

“I’m looking forward to seeing Vimy to fully understand the grounds that more than 3,000 soldiers were killed on and to pay my respects to the war graves,” Boyle said. “In my mind, this is where Canada really added its support to the allied forces. It was the first place the Canadian corps came together to fight as a country and history shows us it was effective.”

To learn more about the Mons re-enactment, visit the Black Watch Canada website.