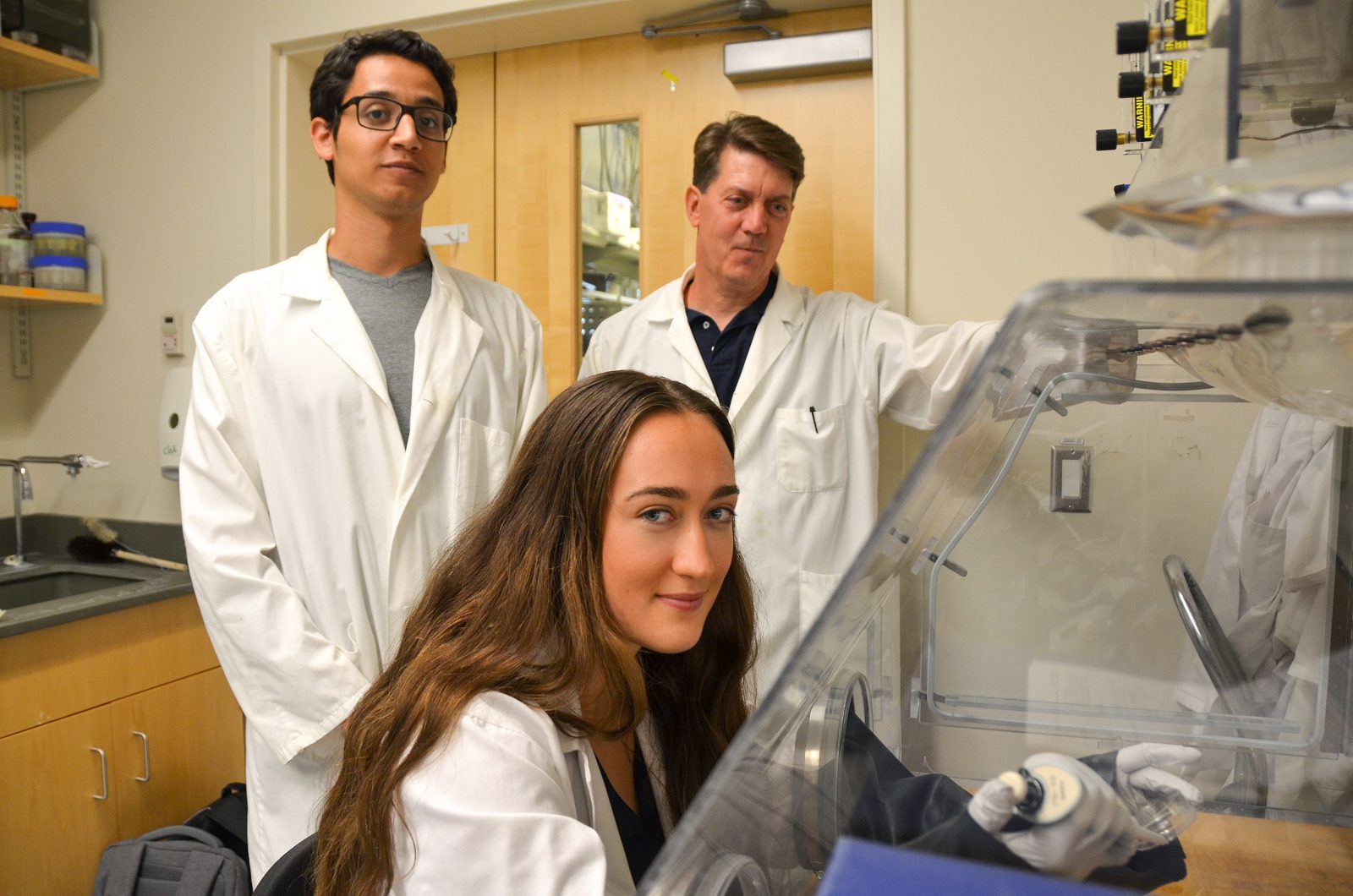 Biology students Bishoy Seliman, left, and Cassandra Cunningham, front, were two of five students who contributed to a research paper being published through an undergraduate course taught by Associate Professor of Biological Sciences Jeff Stuart, right.

A fourth-year thesis project is on its way to not only getting published, but also possibly challenging the validity of research results conducted in many laboratory experiments.

Human cells are often grown, or cultured, in labs as a way to study a plethora of diseases including cancer and neurodegeneration. The goal in these experiments is to as accurately as possible model how the cells would work in a human body and what goes wrong in the disease.

However, after reading, discussing and analyzing hundreds of studies involving cell cultures, the students realized that one important variable has not received the attention it deserves — oxygen.

“Cells that are cultured in labs across the world are being exposed to oxygen levels that are extremely high compared to what those same cells would encounter in a human body,” says student Cassandra Cunningham.

That is because most researchers don’t use specialized equipment to reduce oxygen levels from the 21 per cent found in the atmosphere to the 1 to 5 per cent that most cells are exposed to in the human body.

And that has serious implications for the production of oxygen-free radicals, which damage membranes, proteins and DNA. These are the same oxygen free radicals that are implicated in aging and motivate people to take antioxidants such as Vitamins C and E.

To gain a better understanding of how these high oxygen levels affect human cells cultured in the lab, Cunningham and her fellow students reviewed the results of hundreds of published studies showing how mitochondria and a variety of cellular enzymes take the extra oxygen and convert it into oxygen radicals.

In the end, the group realized that their work was important enough to be published so that scientists around the world could learn from their efforts. They produced a review paper that will be published in the journal Oxidative Medicine and Cellular Longevity this fall.

To have a study published from research arising out a classroom assignment is unusual, yet an effective way to teach, says Stuart.

“In the past, the Biomedical Sciences thesis course was all about individual projects, but I thought that students would be more engaged working as part of a team solving a specific problem: this simple idea of ‘what’s the right oxygen level in culture,’” he says.

“Without question, I saw more interest and excitement in the students, and I think this propelled the learning more efficiently. “

Student Bishoy Seliman says he gained valuable skills in critical thinking and synthesis of information. He personally read more than 50 journal articles just to be able to pick which ones were valuable for the research “and then we had to boil all that information down,” he says.

He says being published as an undergraduate is giving him a great advantage as he plans out his post-graduate studies.

“I remember Dr. Stuart saying that in 10 years, it won’t matter if you got an 85 or an 86, but it will matter that you were published,” says Seliman.

The research paper “How supra-physiological oxygen levels in standard cell culture affect oxygen-consuming reactions” produced by the team, which includes a few of Stuart’s graduate students, will be published this fall.