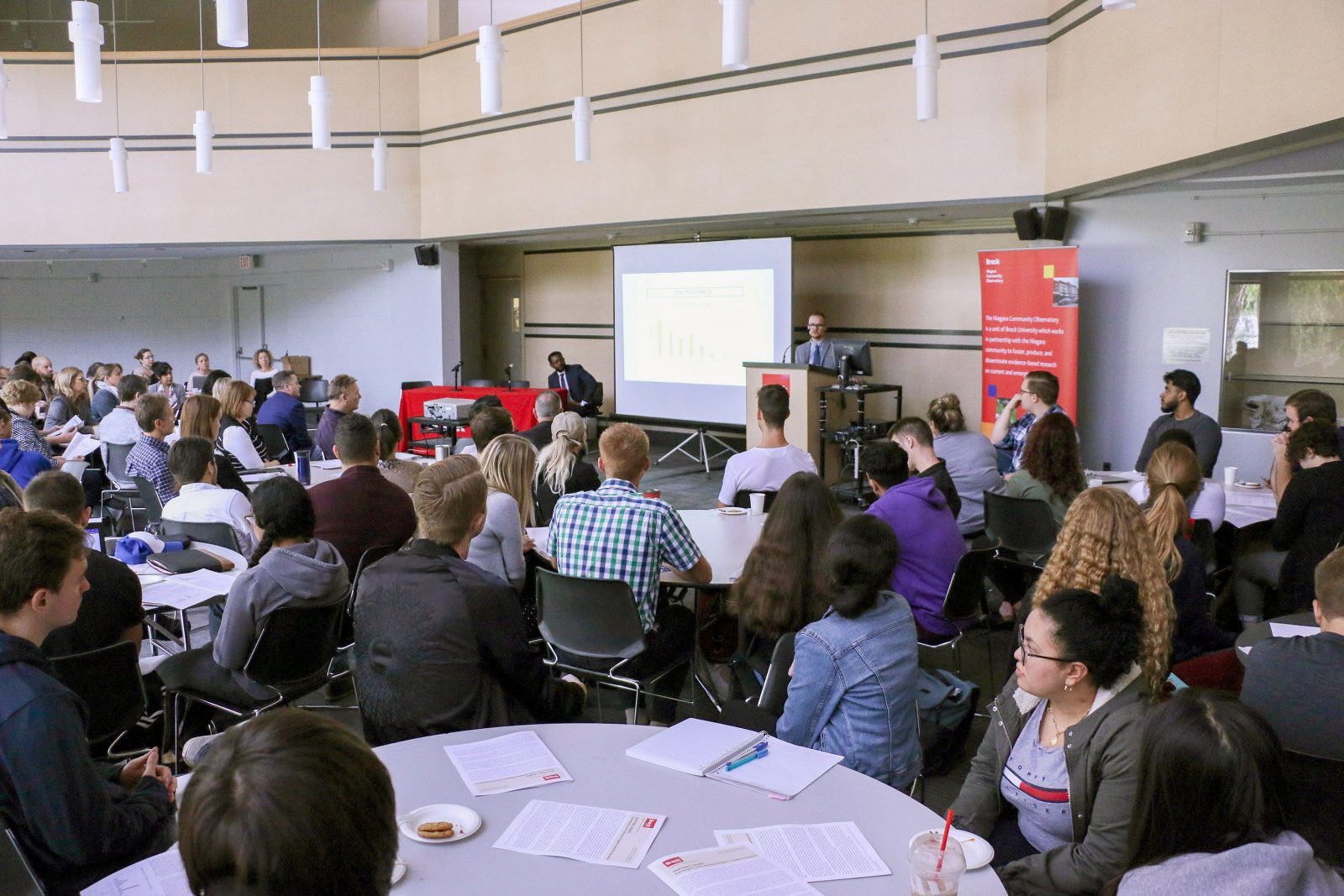 A large crowd was on hand Thursday as the Niagara Community Observatory presented a policy brief on Niagara’s manufacturing sector.

For those in Niagara who continue to mourn the decline of the region’s traditional manufacturing sector, Sean Calcott and Charles Conteh have some good news.

True, the sector is very different than it was 20 or 30 years ago and it has seen some tough times, says Conteh, Associate Professor of Political Science at Brock University and Director of the Niagara Community Observatory (NCO). “But the general trend is that manufacturing has been very resilient, has stayed in the region and, in fact, has seen an upswing since 2012, so there’s a bit of a wind in our sails,” he says. 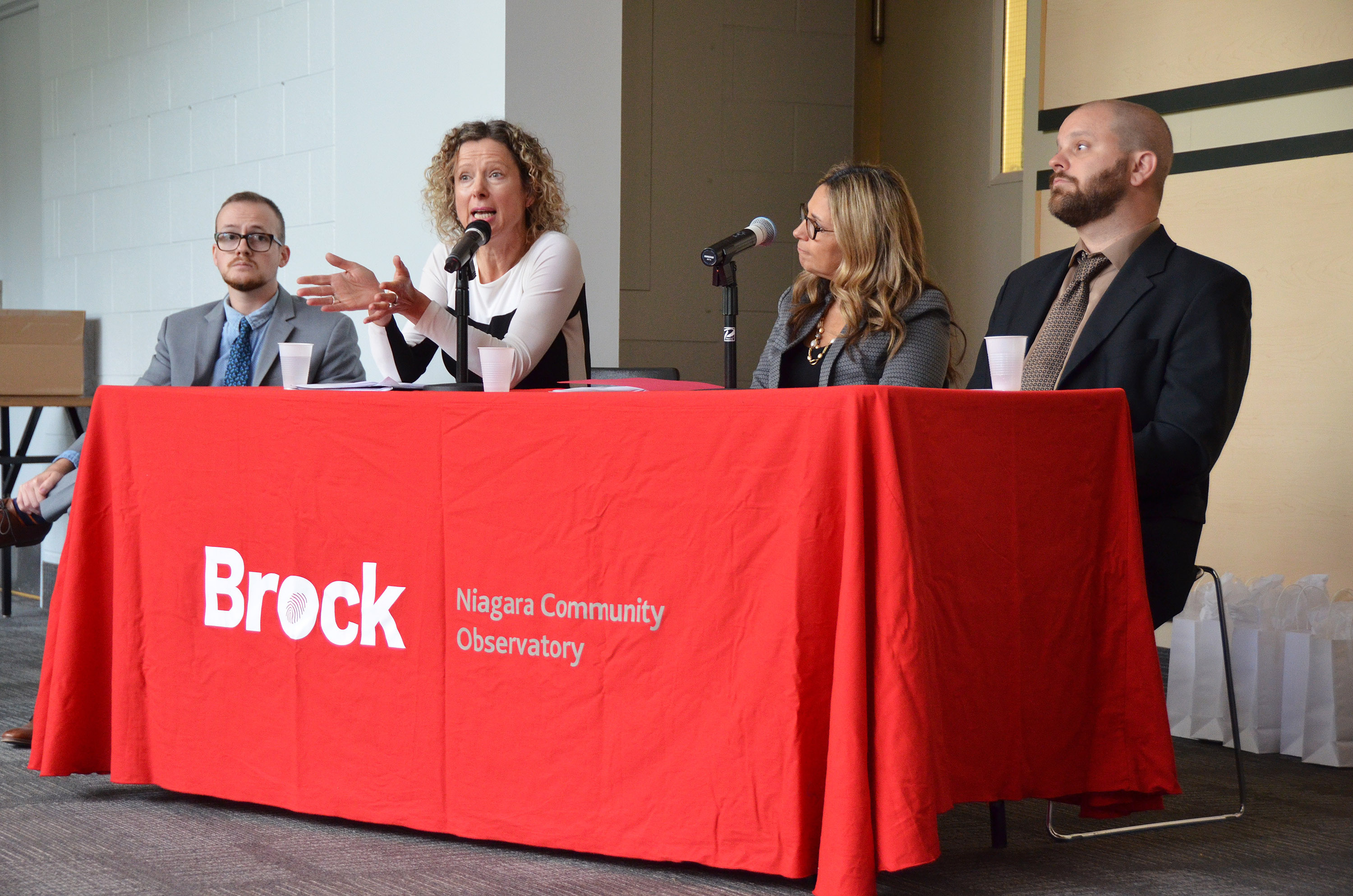 In their brief, Conteh and co-author Calcott, a recent master’s graduate in the Department of Political Science, examine Niagara’s recent economic history with fresh eyes, avoiding comparisons to the region of long ago.

“The strength of manufacturing in Niagara is not as visible to the naked eye as when large plants and factories were prominent in the sector,” says Calcott. “There is a multitude of small firms making diverse products that account for the bulk of the job growth in this sector.”

In the past six years, Niagara’s manufacturing sector has continued to be a main driver of job growth and economic development, says the brief.

It notes that, as of 2016, 243 manufacturing firms in Niagara exported goods totalling about $3.7 billion. Machinery, boilers, mechanical appliances, engines and parts accounted for about one-third of this total, with nickel, plastics, railway and tramway vehicles, parts and accessories also being significant exports.

Across the sector, manufacturing employment increased by 2,075 jobs between 2012 and 2018.

Niagara has moved away from the “large branch-plant model” typical of the previous century, with manufacturing jobs being concentrated in small-to-medium size firms (SMEs) with fewer than 500 employees, says the brief.

“SMEs present advantages over larger enterprises because their smaller footprint enables more risk-taking and innovation than firms which have invested greater resources into an established business model,” says the brief, adding that they can “adapt more quickly to changing market conditions.”

The brief points out one dark lining in an otherwise silver cloud: wages today are generally lower than they were in the manufacturing sector of the past.

“The middle-tier of manufacturing jobs are being displaced by lower-paying positions, while higher-paying managerial and supervisory positions are stable,” says the brief.

To address this challenge, the brief recommends building upon the tremendous strides in education and skills training being offered in the region’s post-secondary institutions that would see “more investment in specialized industrial skills in targeted labour-intensive manufacturing sectors.”

The authors urge Niagara to align itself with the economies of Hamilton, the GTA and Buffalo. “This means building an integrated system of design and production nodes in a distributed network of interlocking supplier and customer firm relationships that spans the QEW industrial corridor and extends to the Buffalo market.”

It also calls for small and medium-sized entrepreneurs, venture capitalists, university and college researchers, economic development officials and others to come together to identify Niagara’s existing strengths and map out strategies to attract investment and build skills training.

Conteh says the take-away message from the NCO’s latest research is that Niagara’s manufacturing sector still forms the bedrock of the economy despite earlier upheavals, and has a bright future.

He says that when they started the research, he already had an “indication” of something positive happening, “but the compelling data gave us evidence beyond a shadow of a doubt that Niagara is resilient and has the adaptive capacity to weather storms.”