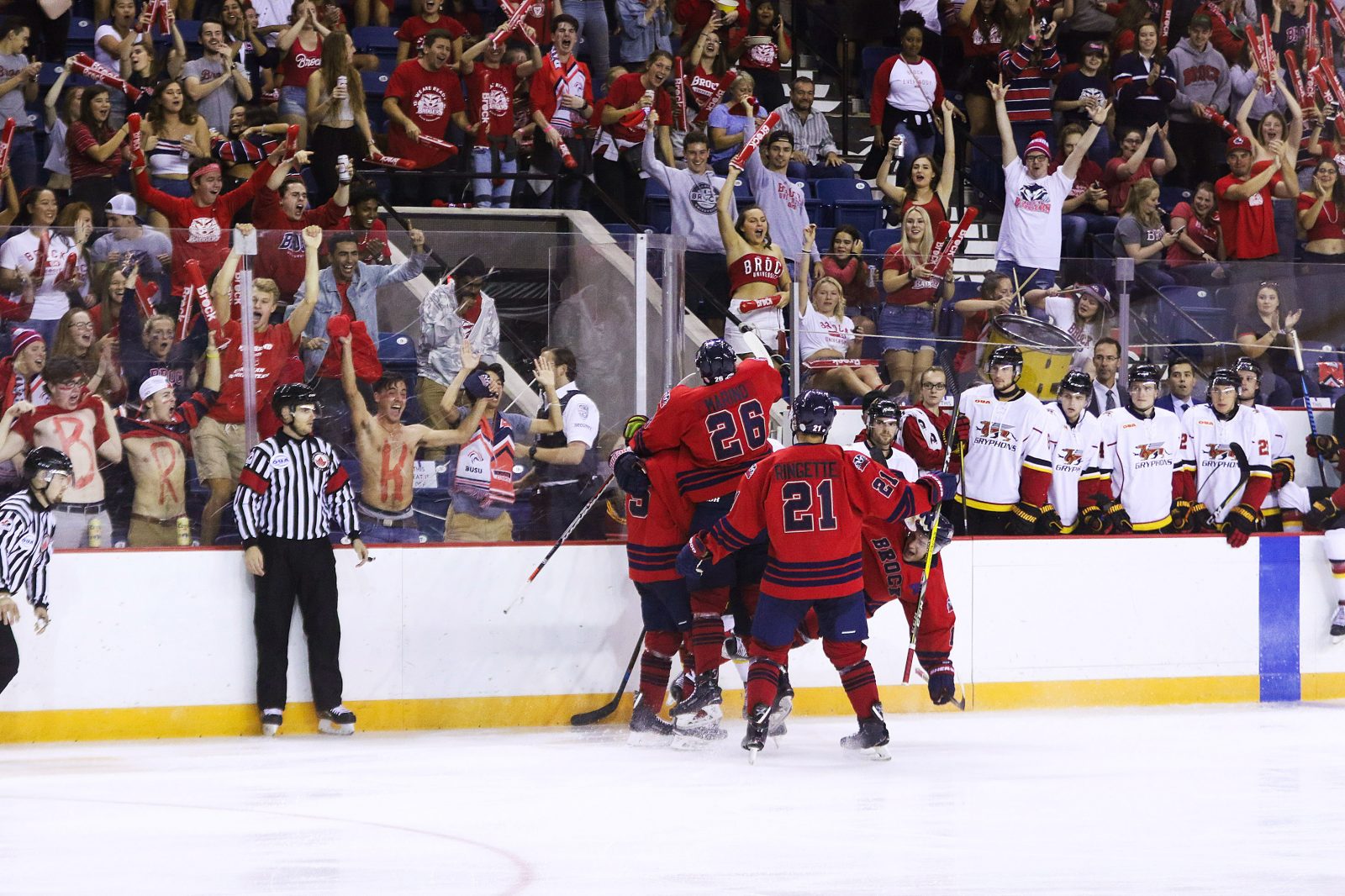 The Brock Badgers celebrate their first goal en route to a 3-1 victory over Guelph in front of 5,000 fans at Meridian Centre on Friday.

A record-breaking 5,000 Brock students, alumni and community members packed the Meridian Centre in downtown St. Catharines to watch the game.

“How special is it when you hear the national anthem and everyone’s singing it?” said head coach Marty Williamson. “It’s crazy. It was so loud that I had to pat my players on the back to let them know they’re going rather than calling their name, but it’s fantastic.

“The drums, the singing, it’s the atmosphere you love to see. You don’t get opportunities often in U SPORTS to play in front of this kind of a crowd and you would never know this is an exhibition game by the way the two teams played out there.”

Burton scored during a goal-mouth scramble with less than five minutes remaining in the third period to lift the Badgers to victory.

Cosimo Fontana registered the assist on the game-winner.

“I kind of blacked out from the play, but I remember the puck got put low,” said Burton. “I knew Fonts was going to try and take it to the net, he was talking about making that kind of play earlier in the game. So I went to the back door and the puck squeezed out and I got it over his pad.”

Connor Brown scored twice. He put Brock on the board first with a breakaway goal in the first period. In the second, Gryphons defenceman Mark Raycroft tied the game up 1-1.

Brown added an empty netter to secure the win.

Brock outshot Guelph 30-24 as the game featured stingy defence and few juicy scoring chances. Williamson said the Badgers will be a defensive team this season and gave a lot of credit to his squad’s strong goaltending depth.

“It’s the only way I think we know how to play,” said Williamson. “We’re not going to be a high-scoring team. It’s just our makeup. We have to work awfully hard, but our motto is that if we can get to three or four goals, we believe we win.

The creator of the Steel Blade Classic, Ed Werner, dropped the puck during a ceremonial faceoff.

Werner, a longtime Brock supporter and avid university hockey fan, came up with the Steel Blade concept 20 years ago to help recognize the historical connections of Brock University and to raise the profile of the men’s hockey team. The Steel Blade trophy, an 1803 sword which carries the name of the annual champions, was a donation by the Werner family.

The Badgers return to the Meridian Centre on Saturday, Nov. 17 when the men’s and women’s basketball teams take the court to play the Ryerson Rams.