How to get around campus during construction season 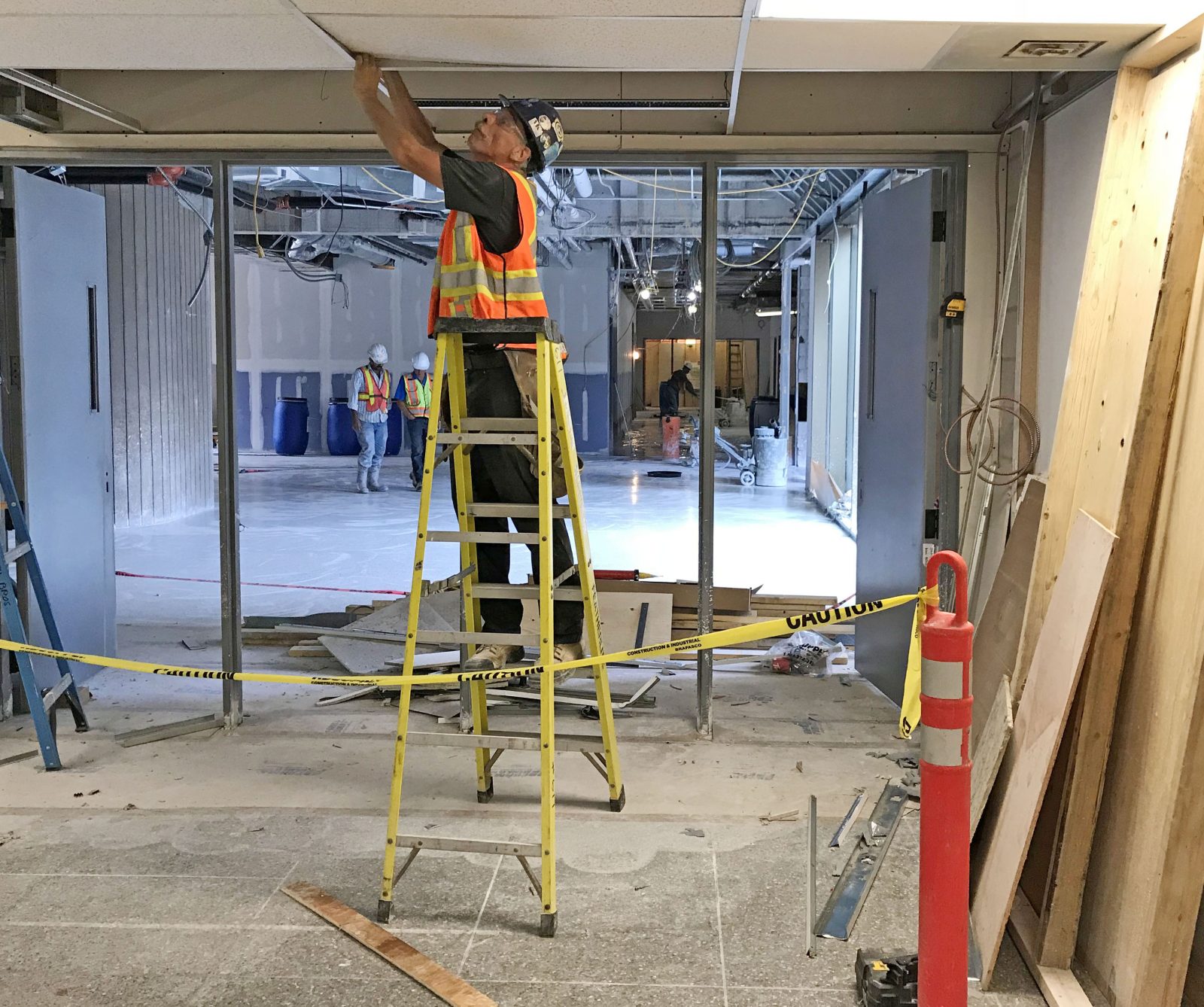 A construction worker installs ceiling tiles in front of the entrance to what will soon be the Rankin Family Pavilion. With construction continuing, some detours will be required as students return to Brock.

Students arriving at campus for a new academic year will be taking detours to get around major construction in front of Schmon Tower.

For the first two weeks of Fall term, ground-level pedestrians traversing between the east and west sides of main campus will be diverted through corridors in Thistle Complex, at the rear of the Tower, while work continues on Brock’s new front entrance in the Rankin Family Pavilion.

Pedestrians seeking ground-floor access to the Tower elevators are also in for a temporary detour, as the corridor between Mackenzie Chown Complex and the James A. Gibson Library / Matheson Learning Commons remains temporarily closed by the same construction.

That means accessing high-traffic areas such as Brock Central @ the Registrar’s office and the Thistle Welcome Desk and Brock Card office will require different routes.

Also, please note after being closed for the summer for construction, the Centre for Digital Humanities — located on the east side of Thistle Complex — has now been re-opened and is once again accessible from its main entrance.

1. Accessing Schmon Tower and Library/Learning Commons from the front of campus (Map A)

For those arriving to campus near the area of the Isaac Brock statue and needing to access the Tower, the Library/Learning Commons and the west end of campus, pedestrians will need to detour to the west around the construction zone or through Welch Hall/David Howes Theatre lobby and on to the entrance at Scotiabank Hall near the Computer Commons (Fishbowl).

To reach the Mackenzie Chown Complex, Jubilee Court, Decew residences and the east end of campus, pedestrians in the Isaac Brock statue area will need to go through the Goodman School of Business. 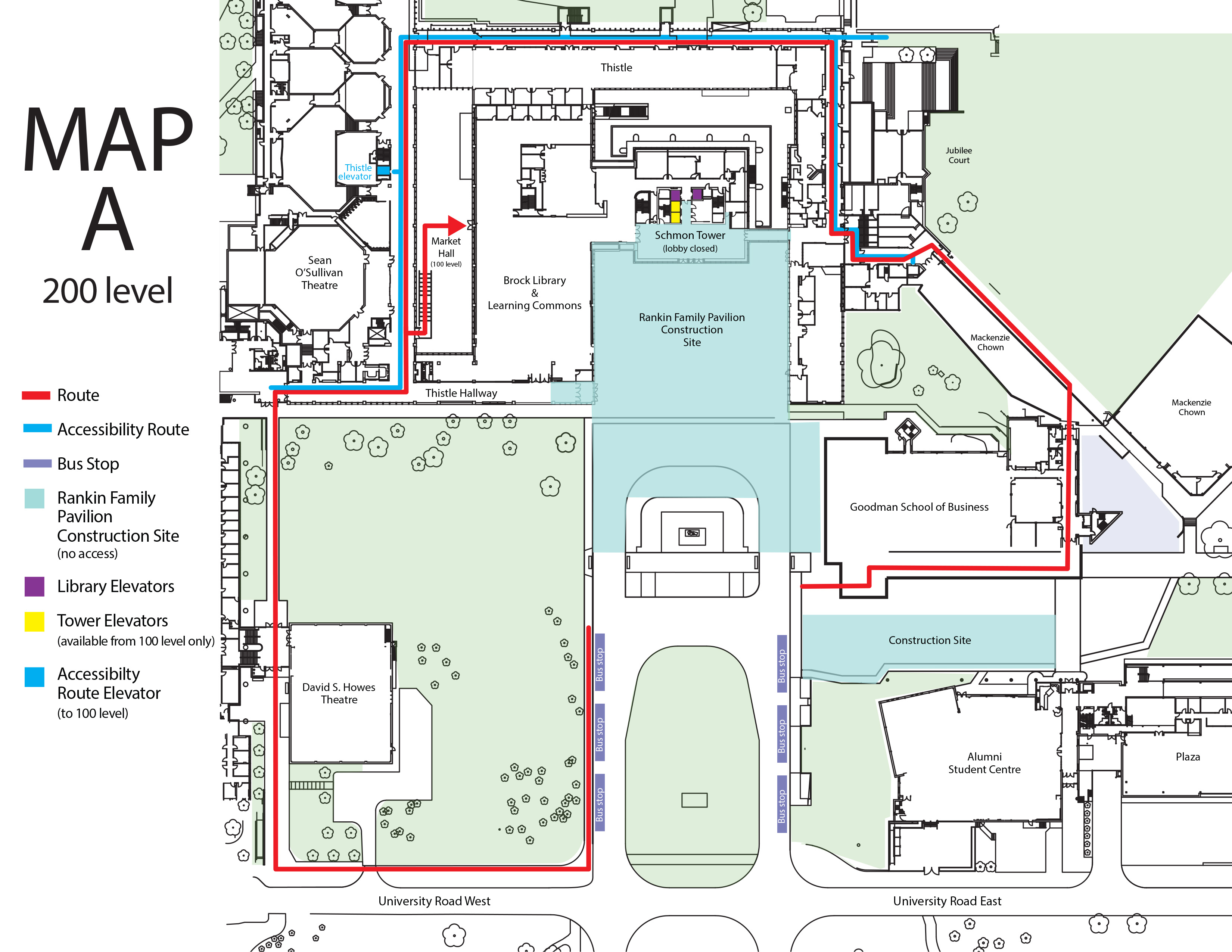 2. Using the Tower elevators to access administration floors (Map B)

Access to elevators serving the Library floors of the Tower, which are accessible through the Learning Commons, will not be affected. 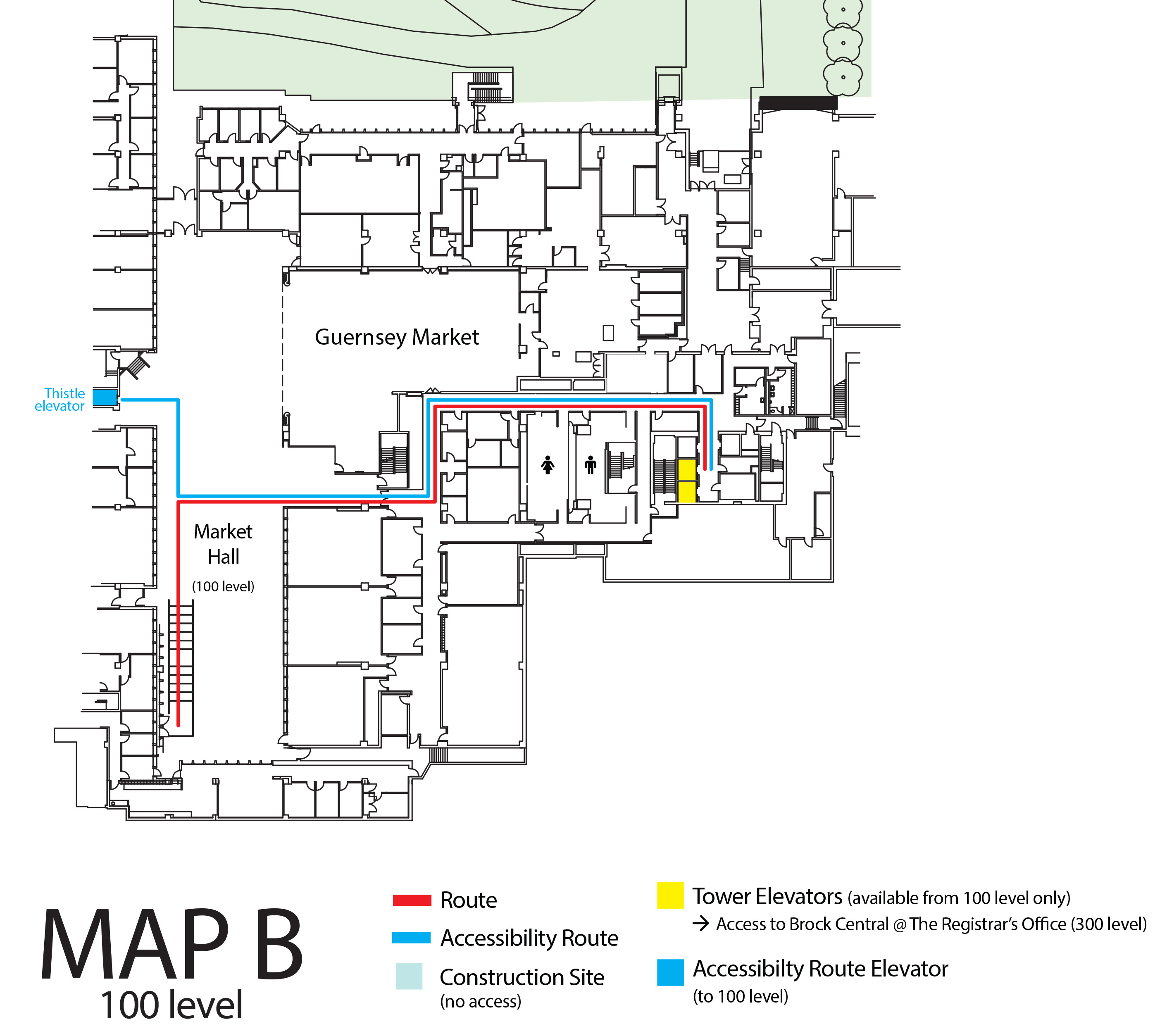 3. Using interior corridors to get between the east and west parts of campus

Because the corridor between the Library/Learning Commons and the east side of Thistle Complex has not yet re-opened, travel between the two sides of the Tower will take some extra time.

Persons moving internally through the Tower area, from one side of campus to the other, will need to detour through the hallway behind the Tower, using the Thistle north and Thistle west corridors.

Another option for crossing campus is to take the exterior stairs and use the Level 300 podium that wraps around the Tower. 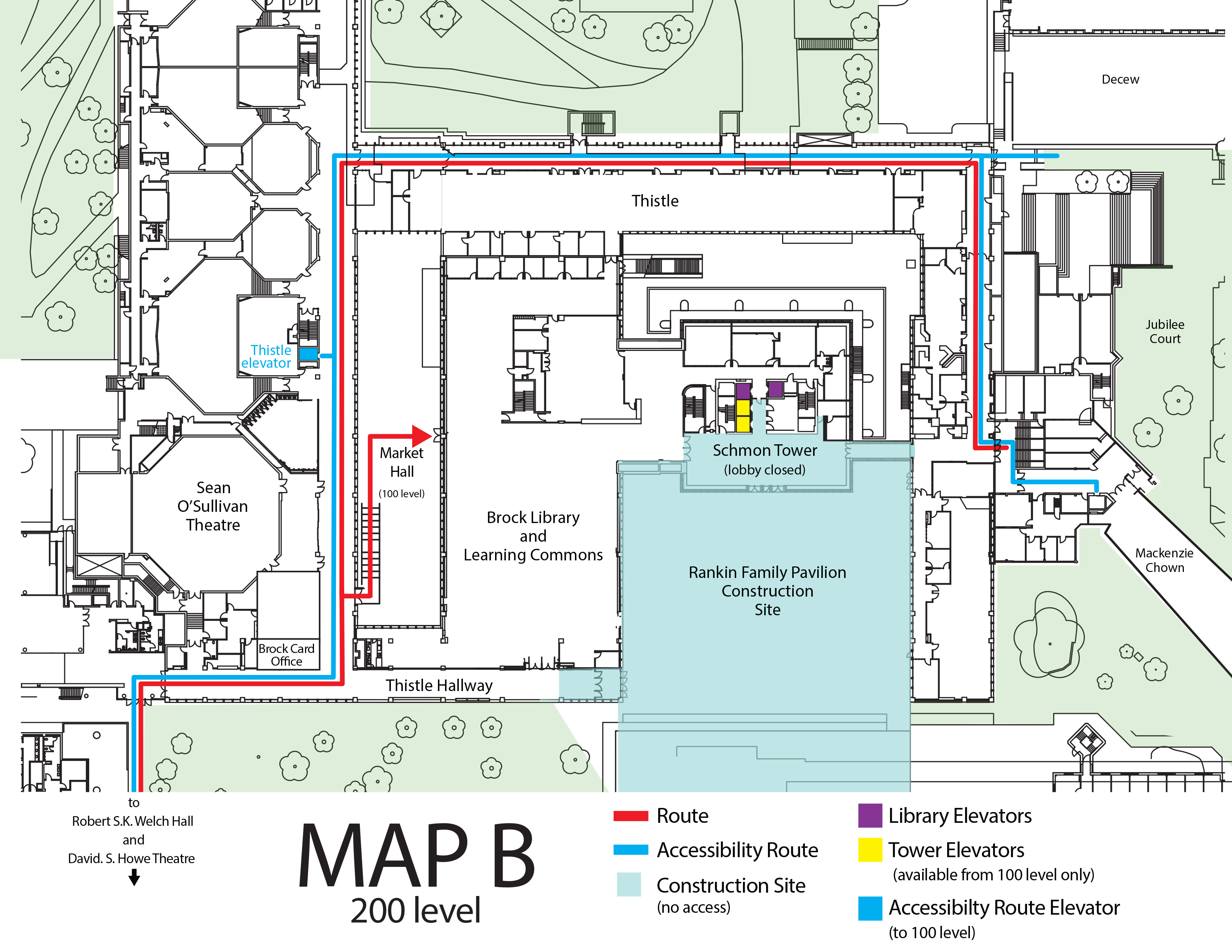 4. Getting to Brock Central @ the Registrar’s Office

The Brock Central @ the Registrar’s Office on Level 300 of Schmon Tower is a key destination for new students coming to campus. Because access to the Schmon Tower elevators and stairwell is blocked from Level 200, anyone needing to get to Brock Central will need to access it from either Level 100 near Market Hall, or from the exterior walkway (Podium) that surrounds the Tower. The doors leading to Brock Central from outside can be found on the west side of the Tower.

5. Getting to the Brock Card office

Another popular destination for first-year students is the office where they get their Brock identification cards. This is located on the west side of Thistle Complex near the stairs leading down to Market Hall. For students trying to access this office from the east side of the campus such as Mackenzie Chown Complex, Jubilee Court or the Decew Residences, follow the corridors through Thistle Complex that wrap around the base of Schmon Tower. These will lead toward Sean O’Sullivan Theatre and the Brock Card office can be found just south of that space. Please note: From Tuesday, Sept. 4 until Friday, Sept. 7, the Brock Card office will be temporarily located in Market Hall.

The closure of the Schmon Tower lobby means the two gender-neutral, accessible washrooms in front of the Tower elevators are temporarily unavailable. Other accessible, gender-neutral washrooms are available: near Sean O’ Sullivan Theatre on Level 200; on Level 100 of West Thistle hallway; and on the fourth floor of Schmon Tower.