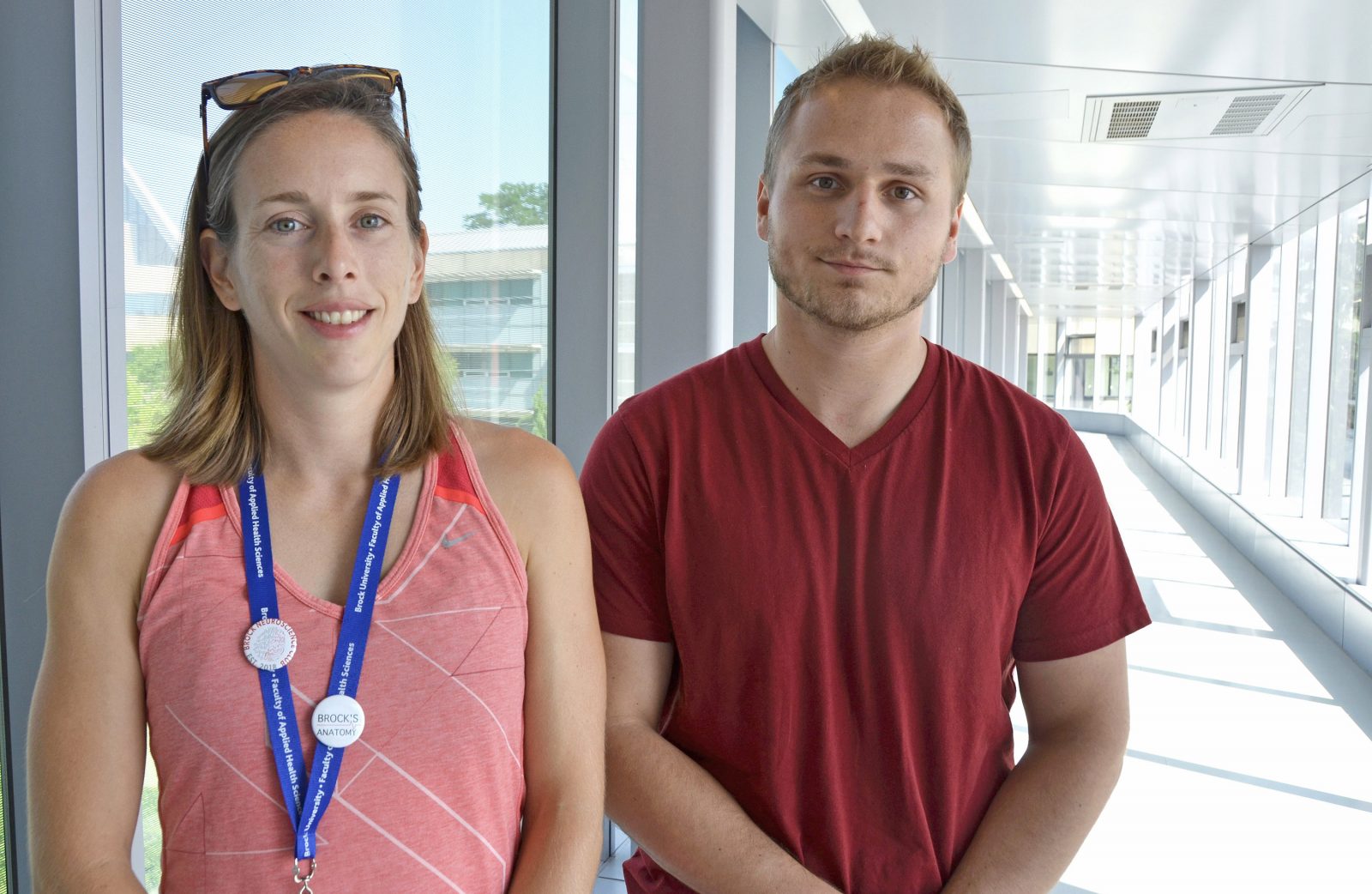 Assistant Professor of Health Sciences Rebecca MacPherson and master's student Bradley Baranowski were among a Brock University research team that found a diet high in saturated fats and sucrose can contribute to the development of Alzheimer’s disease when paired with the normal aging process.

New research from Brock University has shown the food decisions you make today could contribute to the development of Alzheimer’s disease later in life.

Brock research published recently in the journal Physiological Reports says a diet high in saturated fats and sucrose can lead to Alzheimer’s disease when paired with the normal aging process.

Alzheimer’s is a type of dementia that causes problems with memory, thinking and behaviour, with symptoms worsening over time. Associated with aging, previous research has also linked the development of Alzheimer’s disease to diet-related obesity.

Brock Assistant Professor of Health Sciences Rebecca MacPherson says her team’s latest research shows the impact that such a diet has on the “signaling pathways process” in which molecules in a cell work together to control one or more cell functions.

“In this study we’re looking at the middle-aged group,” she says. “We’re examining how diet can alter signalling pathways in the brain at that point in time, early on before you’d see any symptoms of Alzheimer’s disease.”

The research team, which includes PhD student Kirsten Bott and master’s student Bradley Baranowski, also looked at how the high-fat, high-sucrose diet can bring about inflammation and changes to molecules in the brain, referred to as cellular stress.

The team worked with two groups of middle-aged mice, feeding one group a high-fat, high-sugar diet and the other group, a normal diet.

After 13 weeks, the researchers examined two areas of the mice brains: the hippocampus, responsible for long-term memory; and the prefrontal cortex, which regulates thinking, emotion and behaviour.

The team compared the brains of the two groups of mice, as well as the middle-aged mice brains against those of the younger mice.

The older mice brains showed more deterioration than the younger brains, suggesting that the normal aging process plays a role in the development of Alzheimer’s disease.

But there was a big difference between the brains of mice fed the high-fat, high-sugar diet compared to those eating a more well-balanced diet.

“When we gave mice this high-fat, high-sugar diet, we saw exacerbated effects of aging on the different markers of inflammation, insulin signalling and cellular stress,” says Baranowski, the study’s lead author.

He explains that the Western diet — typically low in fibre, fruits, vegetables, legumes and whole grains and high in red meat, dairy products and processed and artificially sweetened foods —  causes chronic, low-grade inflammation throughout the body.

This results in the release of cytokines, small proteins that are important in cell signalling, but in this case act as markers for inflammation.

These cytokines induced by low-grade inflammation “are able to pass the blood-brain barrier,” says Baranowski. These, in turn, activate other cells leading to more inflammation and insulin resistance in the brain.

“The neuroinflammation and brain insulin resistance contribute to the increased activity of key enzymes responsible for producing the plaques you commonly see with Alzheimer’s disease,” he says.

The research adds to basic understanding of the signalling pathways involved in Alzheimer’s, MacPherson says. Future work will examine what can impact these pathways.

“People often view Alzheimer’s disease as a genetic disease when in fact, genetic mutations leading to Alzheimer’s accounts for less than five per cent of cases,” says Baranowski.

“This study highlights that our lifestyle choices matter and can potentially be putting us at risk of developing or progressing neurodegenerative diseases such as Alzheimer’s.”

The team’s findings are outlined in their study, “Evaluation of neuropathological effects of a high?fat high?sucrose diet in middle?aged male C57BL6/J mice,” published in the journal Physiological Reports.