Behind the scenes of the Rankin Family Pavilion 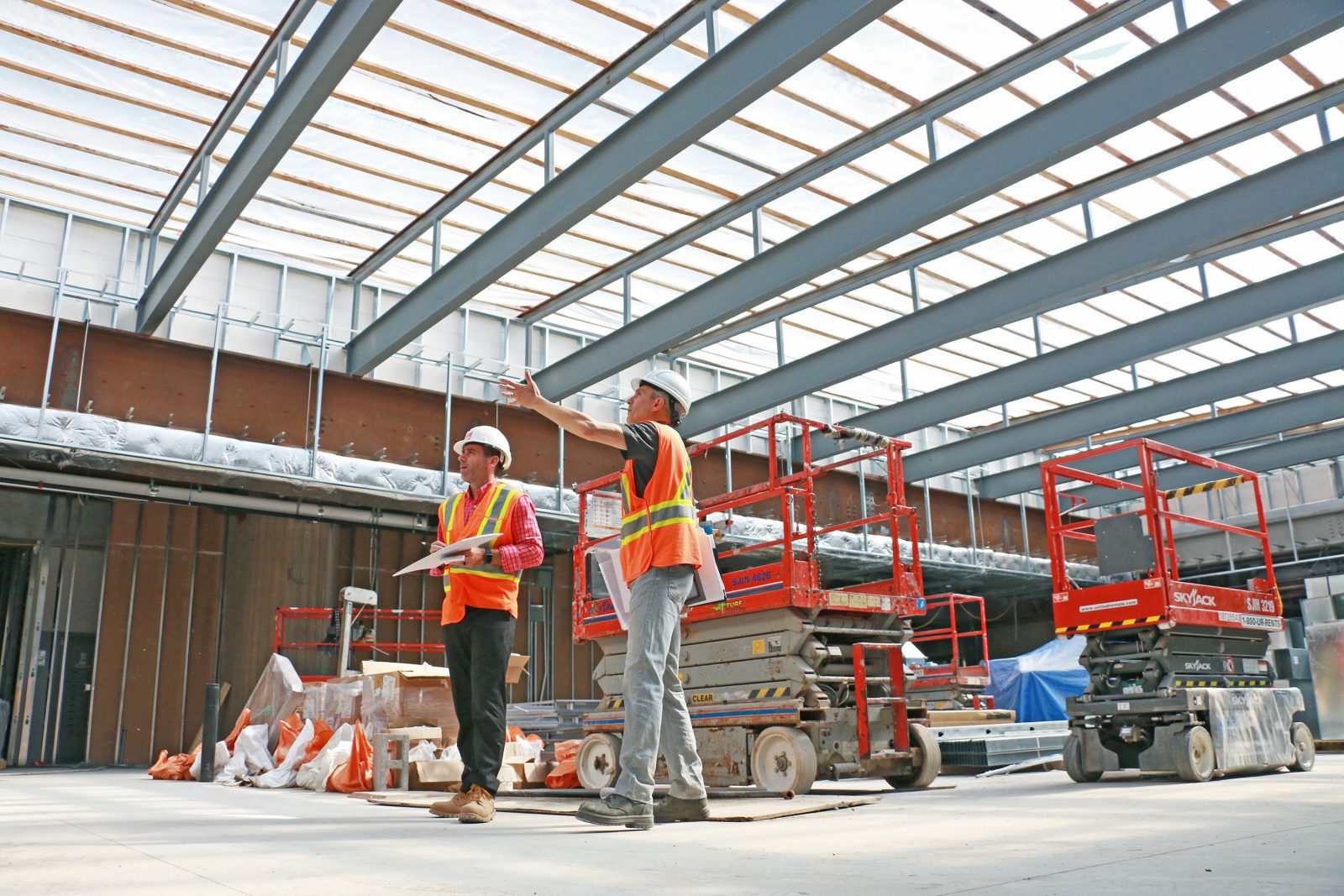 As anyone who has ever renovated an old house knows, having patience is as important as having a hammer.

That has meant some patience is required as Ball Construction works to mesh the dramatic new Rankin Family Pavilion into the existing Schmon Tower and surrounding buildings, which date back some five decades. 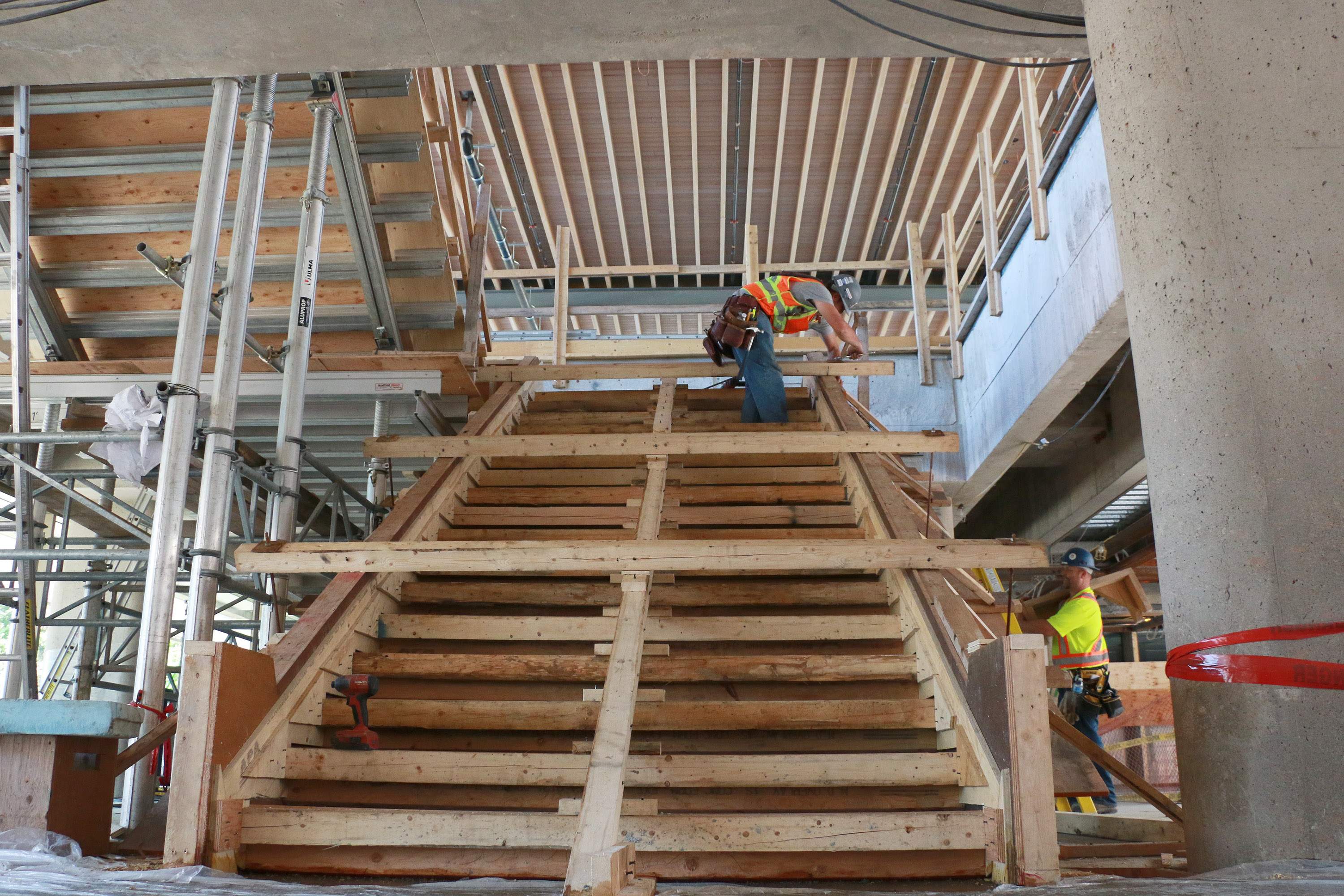 The second storey of the new Rankin Family Pavilion will be accessible via a dramatic new staircase near the front doors.

However, the wait will be worth it in the end, when the two-storey project opens in October.

“Architecturally, the Pavilion project is a catalyst for the centre of the campus,” said Project Manager Scott Roper on a recent tour. “It reinforces the beautiful entrance axis formed by the Willow Circle, Isaac Brock Boulevard, General Brock Sculpture and the Tower. Cities and other campuses plan features like this, but time and other ideas  diminish the impact.”

As a result of delays with some of the exterior components, work has slowed, but things are now back on track.

The plan is to open a corridor between the James A. Gibson Library and the east side of Thistle Complex by the time the Fall term starts in September. Unlike last year, however, this year’s corridor will be more complete with the final finishes in place.

The finishes will give a teaser into what the community will see in the entire Rankin Family Pavilion – which will have a bright, high-end look with plenty of natural light flooding in from the massive new skylight.

“It will be the first singular impression people get of the character of the University, but as a vibrant new entrance and centre of campus, I believe it will also be a rebranding,” Roper said. “Aside from the welcoming architecture, once you come inside, it shows clean and clear sophistication. It will show that we’re serious about what we’re doing, and that there’s refinement and confidence.”

While touring the project, Roper provided updates on various aspects of the work being done including:

Centre for Digital Humanities:  Interfaces with adjoining buildings will have their fire ratings increased and the entire space has had a sprinkler system added.  The west wall of the Centre bordering Marketing and Communications and north wall bordering Thistle Complex will serve as fire breaks, which means creating barriers above the ceiling level and adding more fire suppression elements.

Skylight: Although delayed, the glass is expected to arrive next week and will be installed immediately after.

Hidden services: In order to maintain the clean look of the original concrete columns and waffleslab under the podium, all electrical and network wiring, duct work and other services are hidden under the first-level concrete floor, and in the second-level floor. To make this work on the second storey, a floating floor design is being used that creates a hollow area below. This also allows the flooring to match the bottom of the glass walls that surround the second storey, creating a ‘spatial infinity’ of sorts.

Interior walls: After walking through the front doors, people will notice how open the first floor feels. That’s because all of the collaborative spaces, the social and circulation spaces, and the Gibson Library’s Digital Scholarship Lab and Makerspace will be marked by floor to ceiling glass walls with blinds that can be lowered, when necessary. For the Makerspace, the high-tech equipment will be on display behind the glass walls, creating a more welcoming and open-to-use environment.

Golden Badger display: Near the entrance to the Learning Commons will be a display area with information on the history of the University, Brock’s first graduating class, and other University memorabilia.

Second storey: The new entrepreneurship and business incubation facility operated by Research Services and the Goodman School of Business on the upper level of the Rankin Family Pavilion will also house open collaborative space, a consumer lab, conference and training room and common areas. With a unique wood ceiling, a continuous glass curtain wall with no columns and 360-degree views, the second level will offer some of the best views on campus.

Staircase: The second storey will be accessible via a dramatic new staircase near the front doors. An engineering marvel on its own, the two-flight staircase is only anchored to the top floor and the bottom, with a large landing area seemingly floating with no supports. It was created with a complex network of steel reinforcement bars allowing it to be incredibly strong without the need for supports.