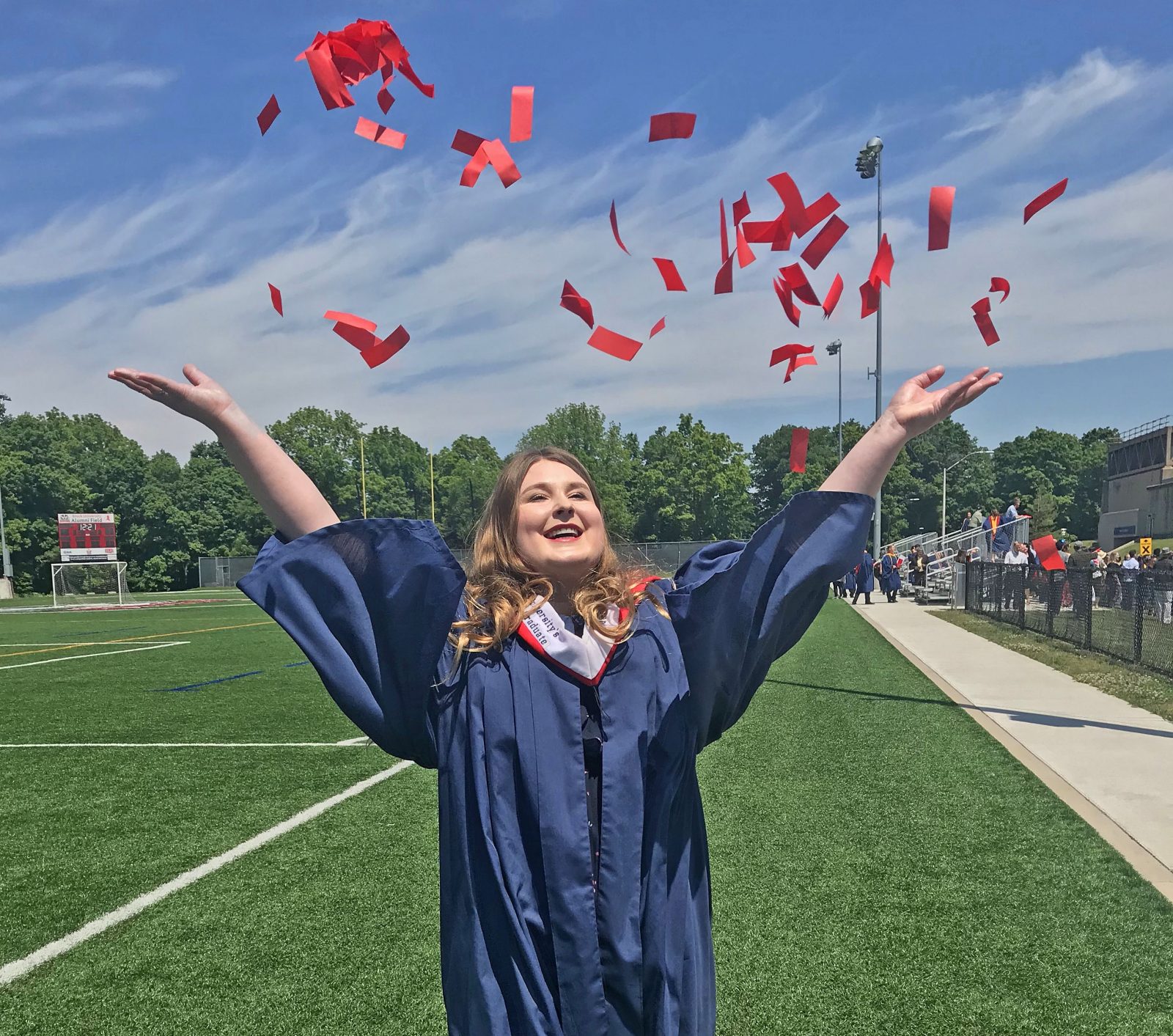 It was a moment she had no idea was coming, but one that she’ll never forget.

Rebecca Alcock, a 21-year-old from Ancaster, became Brock University’s 100,000th graduate Friday, June 8 when she received her Bachelor of Arts from the University’s Faculty of Humanities. 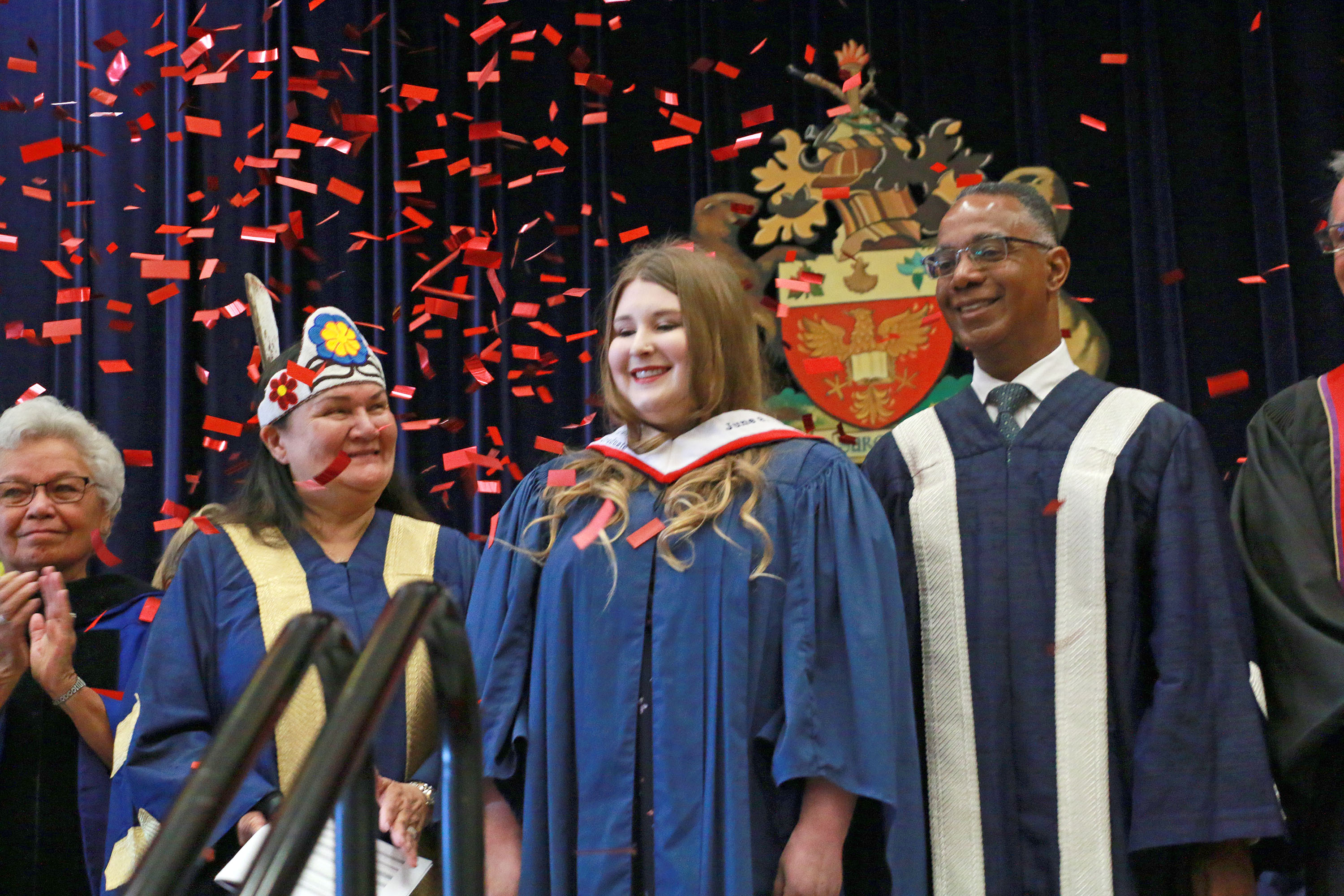 Breaking from the traditional prim and proper occasion of Spring Convocation, music rang out and red confetti rained down as Alcock was hooded by Brock University President Gervan Fearon.

“I was very shocked and nervous, but it was exciting,” she said. “I’m honoured and proud.”

The English Language and Literature major, who plans to enrol in teacher’s college at Nipissing University this fall, called it one of many highlights of her four-year experience at Brock.

“I think the most memorable thing is the friends I met in first year and who I’ve kept throughout my experience here,” she said.

Early on in the planning, Fearon encouraged Brock staff to make the occasion a special one for the 100,000th graduate, while recognizing the importance of the students and staff who laid the groundwork for this moment.

“The idea of being the President of Brock for this moment is an amazing honour, but the tremendous milestone for the University reflects the actions and efforts of everyone up to this point — faculty, staff, alumni, donors, partners and presidents,” said Fearon. 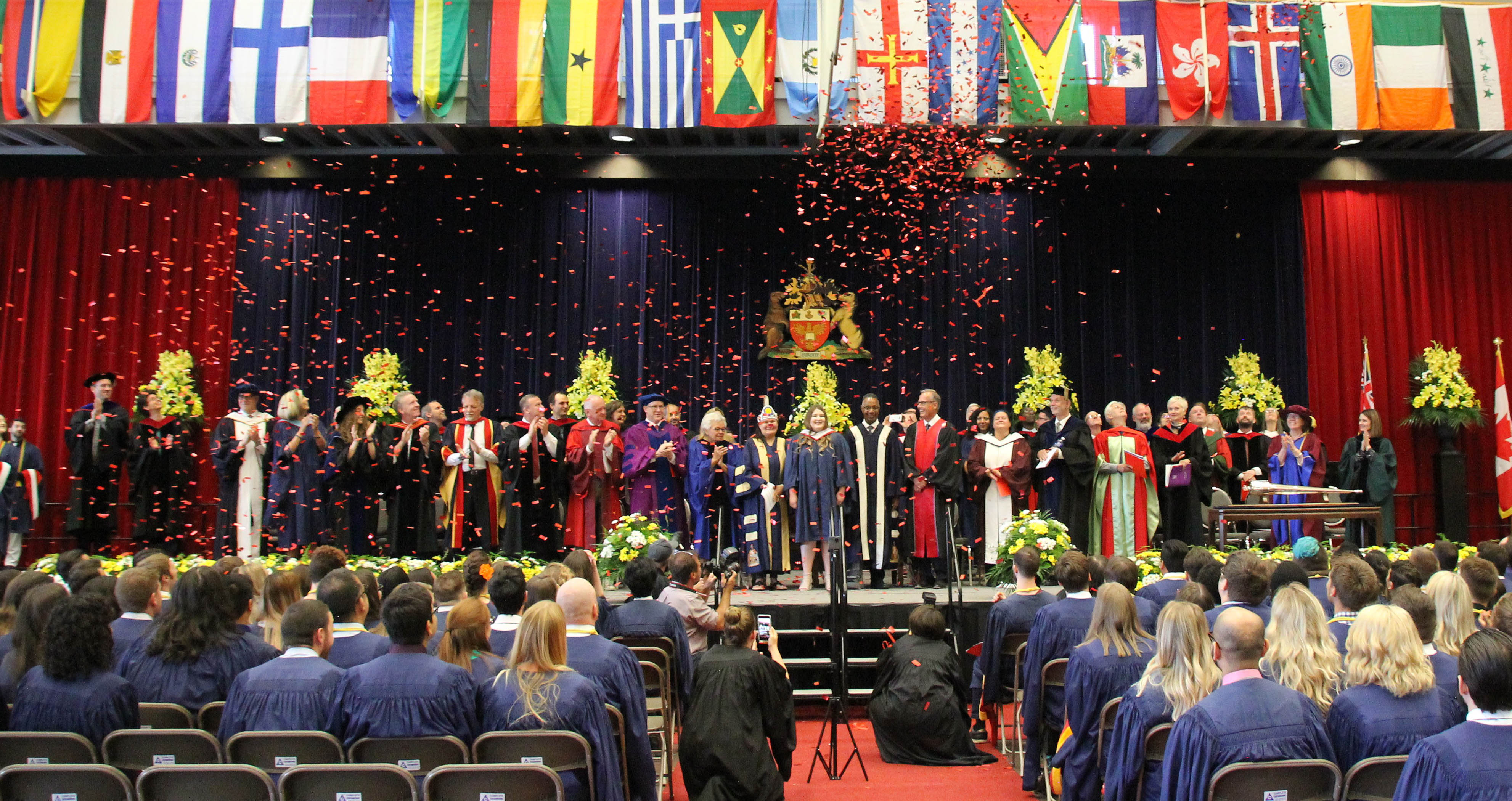 “It places Brock in an elite group of universities and says that as an institution, we have a wide range of individuals across Canada and around the globe who can point to Brock as being where they got their post-secondary education.”

Brock Registrar Geraldine Jones, whose office has been tracking graduate numbers over the years, said everyone was thrilled to be involved with the celebration.

“This is the stuff we love,” she said. “Convocation is purposefully a serious occasion, but it’s always great when we can inject a little frivolity into the medieval traditions we recognize.

“It’s an important marker of where we’ve come and where we’re headed,” she said.

The ceremony came more than 50 years after the awarding of Brock’s first-ever graduate on May 26, 1967. On a sunny spring day, John Auld received his Bachelor of Arts during the first Convocation held on the podium beside the Schmon Tower.

“There were 39 of us — and I was the first to the podium,” Auld said recalling his big day. “We were both excited and relieved, and we all wondered what this ‘Brock Thing’ would mean in our futures.

“Although I subsequently attended several universities, and taught at one for 30 years, none compared to the gift and good fortune I received from Brock,” said Auld, who went on to become a professor at the University of Guelph.

The final Spring Convocation ceremony was also marked with multiple teaching and student awards for the two Faculties represented at the ceremony, Humanities, as well as Math and Science.

The Board of Trustees handed out Spirit of Brock Medals to one undergraduate and one graduate student from each of the two faculties. Elizabeth Angotti (French Studies) and Terrance McDonald (Interdisciplinary Humanities) won for Humanities while Michael Tolentino (Biomedical Sciences) and Mikel Ghelfi (Chemistry) won for Math and Science.

Also awarded Friday was the Governor General’s Gold Medal, given to the student graduating in either Fall or Spring Convocation ceremonies with the highest academic standing in a master’s degree. Winning the award was Michelle Przedborksi, who earned a PhD in Theoretical Physics with a 97.25 per cent average.

Watch the 100,000th graduate celebration below: