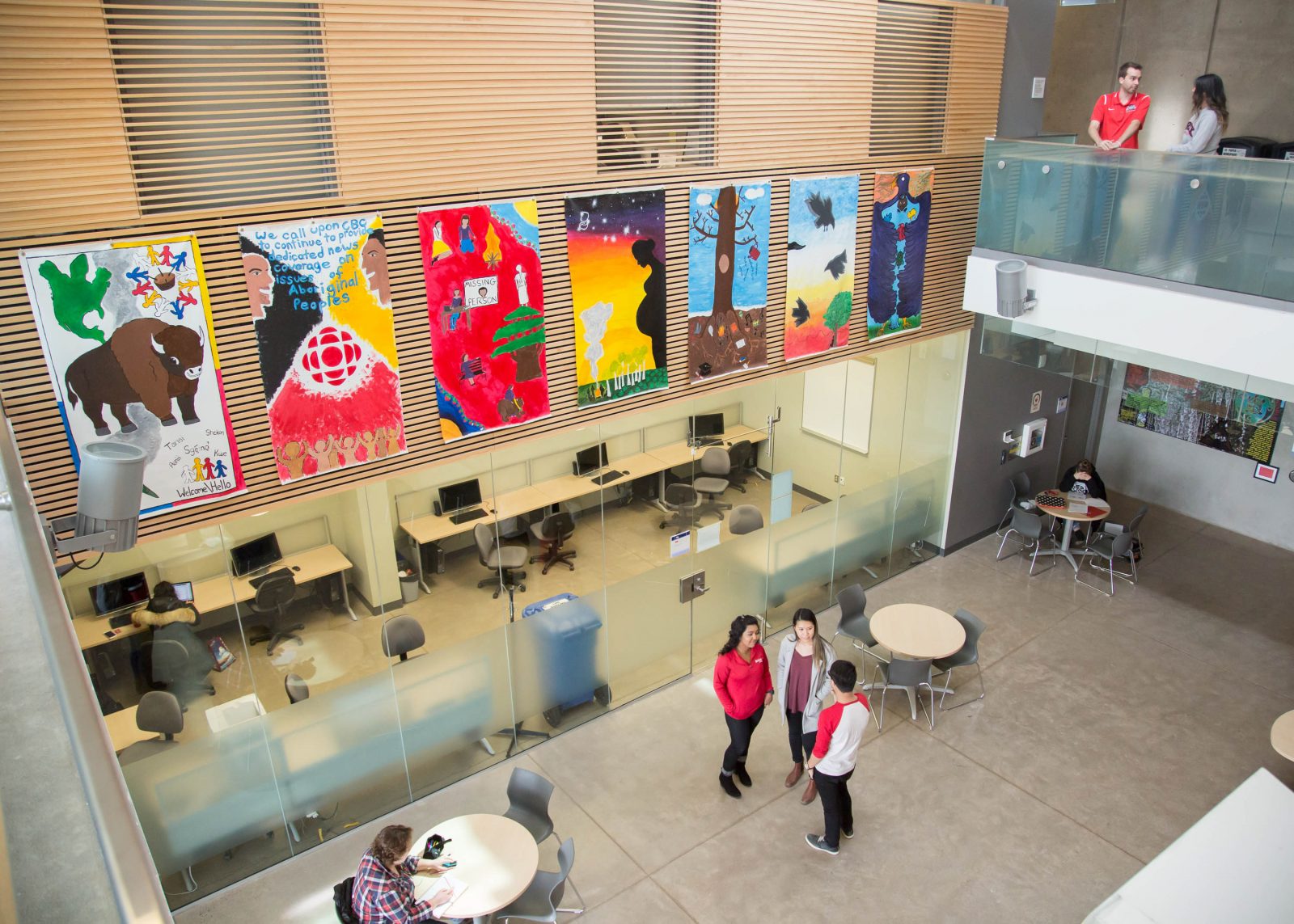 Visitors to the Welch Hall atrium over the past few months have been greeted with vibrant artwork created by students. These colourful paintings are examples of how students have been engaging with Indigenous history and culture in unconventional ways.

The seven banners were painted by students in Pedagogy of Indigenous Arts taught by Spy Dénommé-Welch, Assistant Professor in Brock’s Faculty of Education and a respected indigenous composer.

During the course, students explored Indigenous art and artforms as well as social and cultural topics in Indigenous education and activism.

“With these topics, using an arts focus allows for different methods and approaches to learning, and I find that to be rewarding,” says Dénommé-Welch.

“In this assignment, they worked through current social, cultural and political topics, using a collaborative, arts-based approach.”

While creating their banners, students examined the Truth and Reconciliation Commission’s (TRC) Calls To Action report and incorporated the Calls To Action into their work.

Dénommé-Welch has noticed that students are becoming more aware of the TRC’s work and the need for it to be more of a priority in their own learning and training.

“It is encouraging to see some of this consciousness raising occurring and I do think they have the capacity to advocate for this given that there are whole sections of the Truth and Reconciliation that call for Faculties of Education to be more responsive to all of this.”

The students drew on what they’d learned in class about Indigenous art, teachings and symbolism in designing the banners. Students also developed plans for how they would teach the content in a classroom.

Students in three of Catherine Longboat’s courses explored similar topics while working together on a Two Row Wampum belt project.

Longboat (PhD ’15), Assistant Professor in the Faculty of Education, uses a Two-Row Wampum belt as a teaching tool in and outside the classroom. For the first time, she and her students have attempted to make one.

The design represents an agreement made in 1613 between the Haudenosaunee Confederacy and Dutch settlers. In 1764, the Two Row Wampum was recognized at a meeting in Niagara between Crown officials and 24 diverse First Nations peoples.

The design may look simple, but it represents a complex history and relationship. The two parallel rows of purple beads represent Indigenous and settler communities. The three rows in between represent peace, friendship and truth.

“What we said was, ‘We’re the canoe and you’re the ship.’ The white is actually representative of peace,” says Longboat.

“We’re going to be travelling together in peace. Parallel to one another, but neither one moving ahead of the other. In other words, when there’s intent to do anything, we’re to inform the other side. So that’s supposed to go back and forth.”

Despite some initial challenges in picking up the technique, her students had ambitious plans for their sections of beadwork and aimed to create the longest belt possible when the pieces were combined.

For Longboat, it’s important for her students to understand the Two Row Wampum belt as they sit together and learn to do beadwork.

“I think right now it’s really good because we are dealing with Truth and Reconciliation,” she says of attempting the project. “This is how I see reconciliation: working together on a project that has a lot of meaning for Indigenous people, a lot of understandings, that goes way back.”

Amanda Meyer, third-year Concurrent Education student in one of Longboat’s classes, hopes to be more knowledgeable about Indigenous culture as a teacher.

“I think it’s important that as teachers we do have that opportunity to get our students to recognize what reconciliation is and to start that process because education has the power to change the future.”