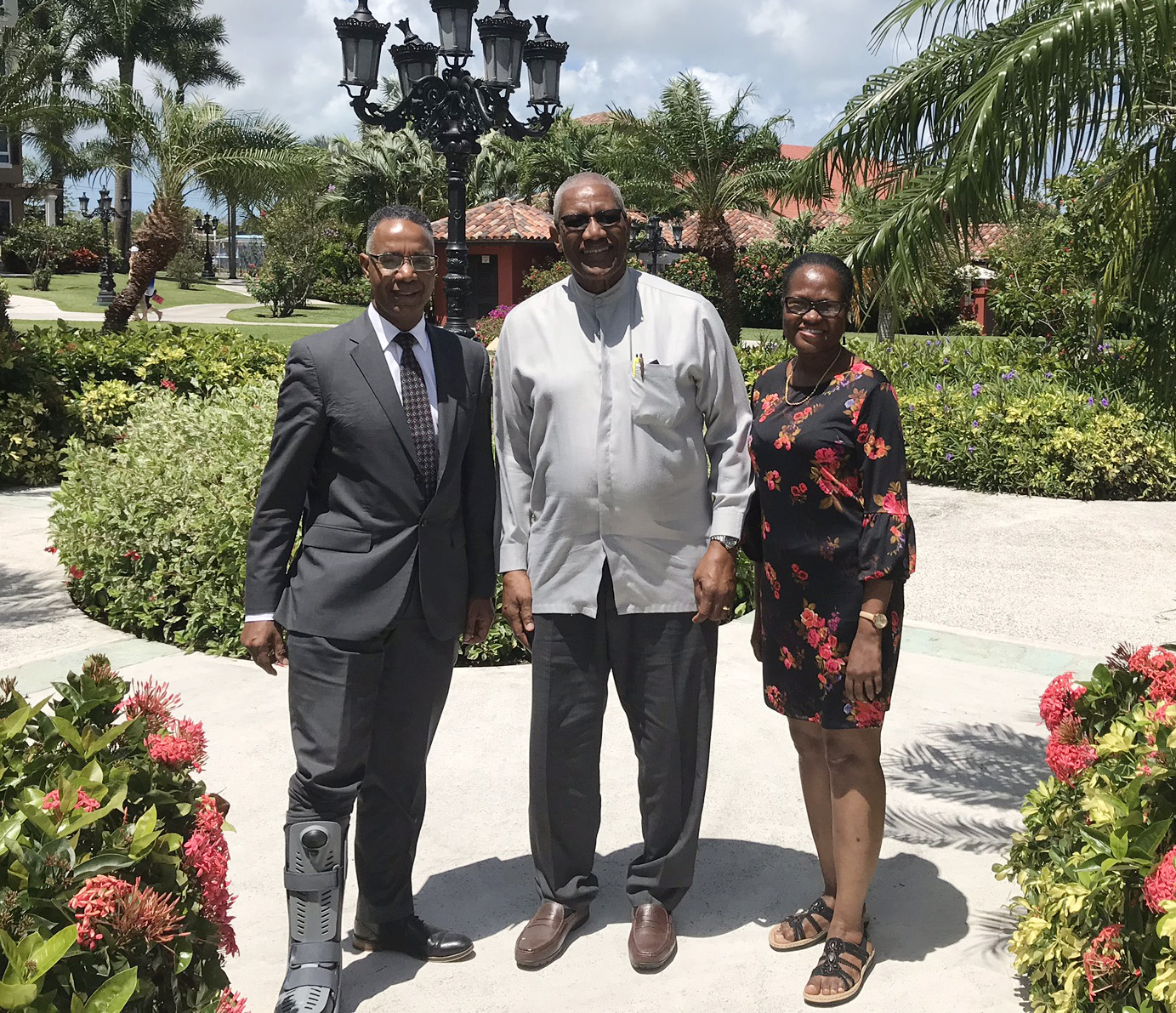 Internationalization is a key priority to Brock University in support of broadening the student experience and recruiting outstanding students from around the world.

Still recovering from surgery and requiring the use of crutches, President Gervan Fearon wasn’t slowed down in his enthusiasm to promote Brock University on the global stage during a recent tour of the Caribbean islands as part of the University’s internationalization initiative. 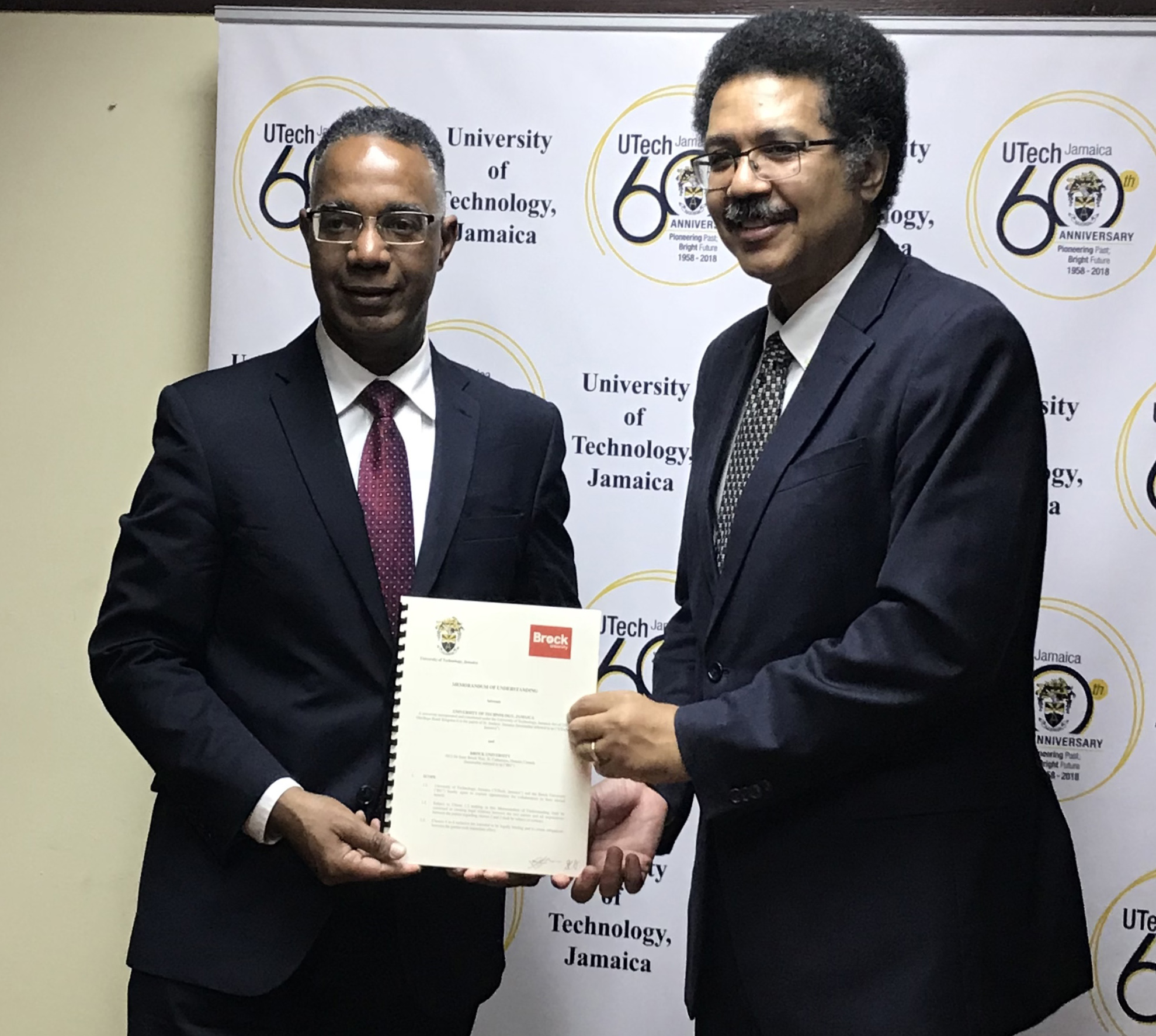 Fearon with University of Technology President Stephen Vasciannie in Jamaica.

Fearon completed a successful seven-day, four-country regional tour of the Caribbean islands of Antigua and Barbuda, Jamaica, Grenada and Trinidad and Tobago as part of efforts to increase student mobility, research collaborations and social impact throughout the region. Fearon was joined by Brock’s Vice-Provost, Enrolment Management and International James Mandigo, and later in the trip, Faculty of Education Dean Michael Owen and Associate Vice-Provost Camille Rutherford in Grenada to further advance the University’s mission.

Brock University was invited to the islands of Antigua and Barbuda by Governor General Sir Rodney Williams to discuss potential areas of collaboration. Fearon and Williams discussed a number of opportunities related to education, environmental sustainability, tourism and commerce which would support mobility for students from Antigua and Barbuda to attend Brock as well as study abroad opportunities for Brock students. 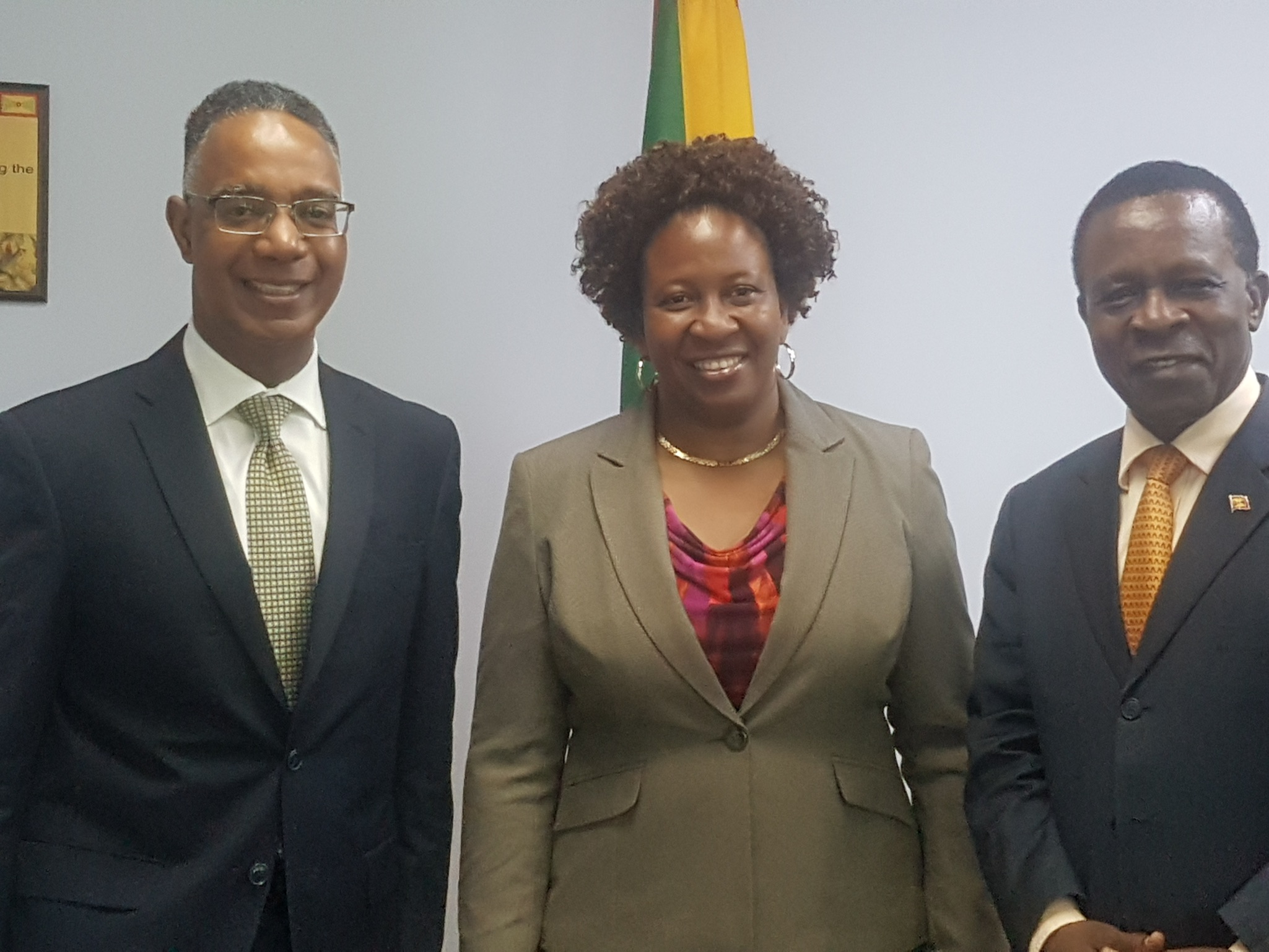 While in Antigua, Fearon was hosted by Brock Applied Health Sciences alumna Joanna Sheppard (BPhEd ’02, MA ’05), who is Associate Professor at the University of the Fraser Valley. She was in Antigua leading her 13th cohort of 30 students from UFV participating in the Champions for Health Promoting Schools program, which she helped to start while a graduate student at Brock.

From there, Fearon travelled to Jamaica where he met with the President of the University of Technology (UTech)Stephen Vasciannie. The two presidents signed an MOU to support the exploration of a number of opportunities involving student and faculty exchange, joint degrees and research collaborations. Like Brock, UTech places a strong emphasis on experiential learning opportunities for students and the common vision between the two universities provides for several opportunities in support of student mobility.

Fearon also met with the Vice-Chancellor of the University of the West Indies (UWI) Hillary Beckles, a 2014 honorary doctorate recipient from Brock. The UWI and Brock have an existing general MOU, as well as a specific MOU between Brock’s Department of Labour Studies and UWI’s Hugh Lawson Shearer Trade Union Education Institute. Fearon and Beckles were joined by UWI International Ambassador and former Jamaican Ambassador to the United States, Richard Bernal. Discussions between Brock and UWI focused on continuing to build upon the successful MOU to address areas of transnational labour and commerce that exist between Jamaica and Canada — and particularly the Niagara Region. 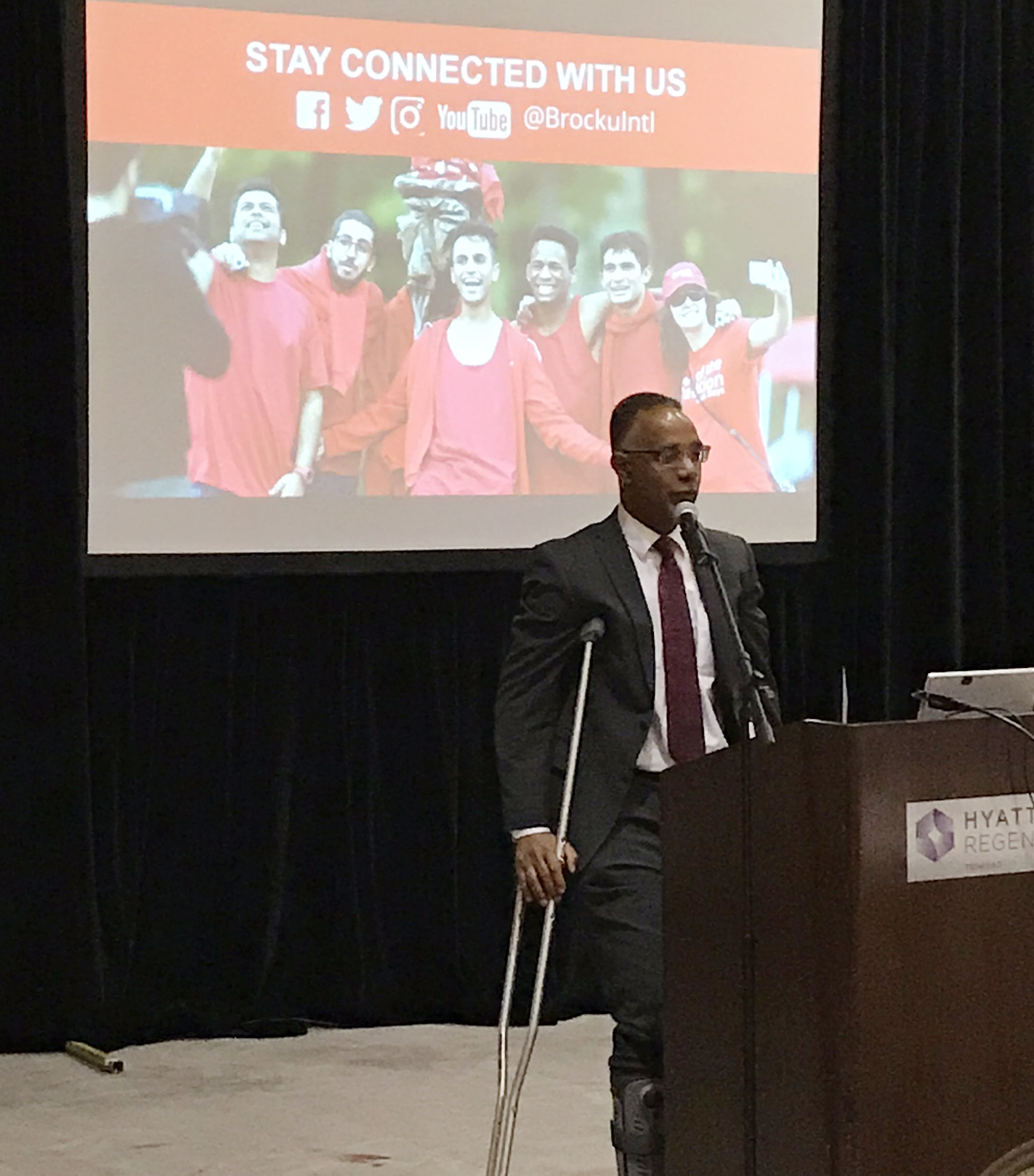 President Fearon address the crowd in Trinidad at a reception held for Brock alumni and incoming students.

The next stop was Trinidad and St. Catharines’ twin city, Port-of-Spain. Fearon met with senior administrative officials at the University of Trinidad and Tobago (UTT) to discuss a renewal of Brock’s MOU with the school. The Brock contingent also toured UTT’s successful business incubator and met students who had started their own companies in areas of renewable and clean energy sources and digital media.

The highlight of the trip to Trinidad was a reception held for Brock alumni and incoming students. More than 60 people packed the presentation room at the Hyatt Hotel in Port-of-Spain, where Fearon welcomed 10 new students from Trinidad planning to start their studies at Brock this fall. The audience was also treated to an inspirational talk from alumna Stella-Marie Chong Sing (BA ’12) who spoke about her experience at Brock and how it prepared her to be a teacher in her home country.

Two students from the Maple Leaf International School, Sanjeev Rampersad and Justin Xavier, were awarded Brock Principal’s Scholarships by their principal, Deborah Jones. Finally, Nickasha Hamilton from the St. Catharines/Port-of-Spain Twinning Association spoke of the long relationship between the two cities and their support of students from Trinidad who studied at Brock. Fearon concluded the night by announcing the new Caribbean Scholarship to be awarded to two incoming students based on their academic merit and financial need. 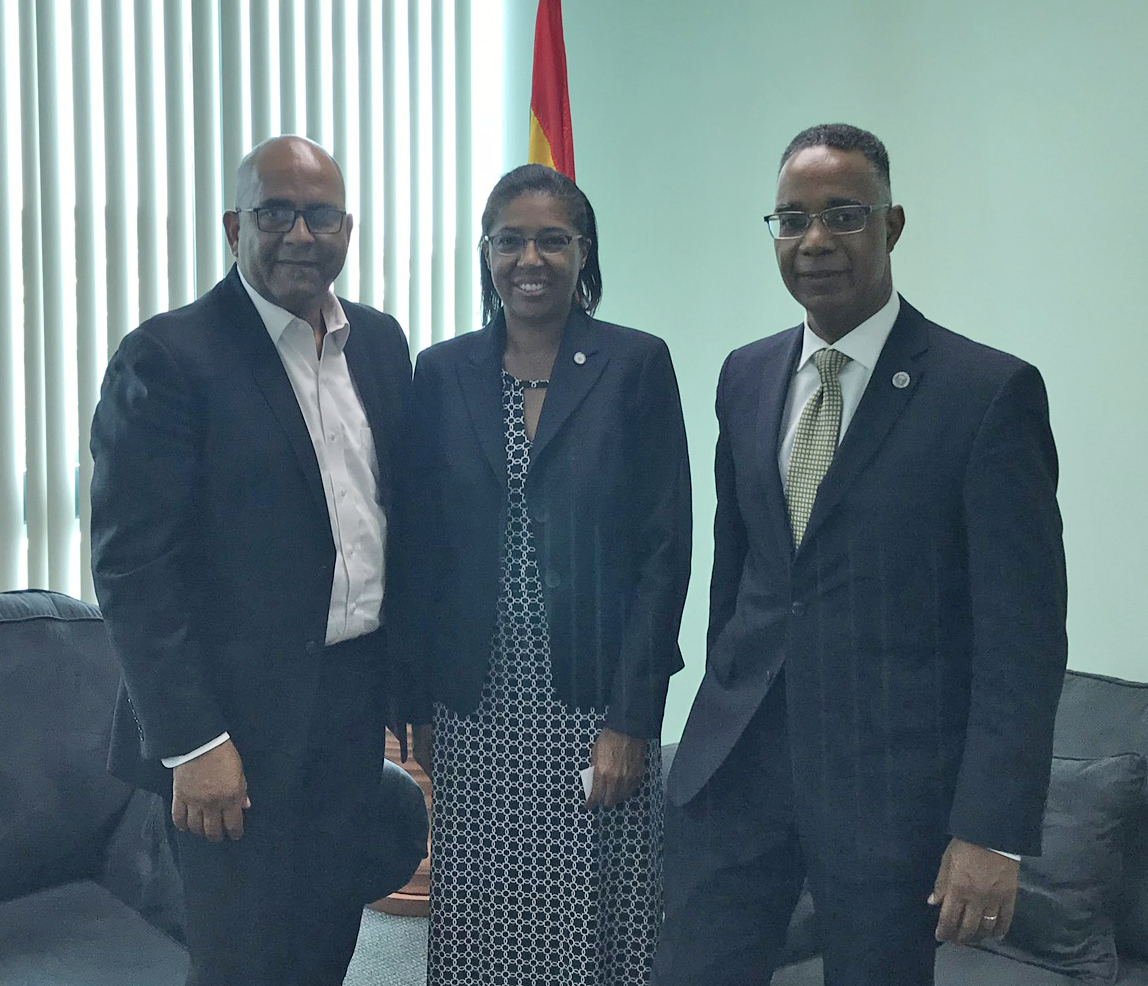 The final stop of the Caribbean tour was Grenada, where Fearon joined Owen and Rutherford, who had been meeting with Ministry of Education officials and teachers around supporting teacher education on the island. Fearon was able to reinforce Brock’s commitment to supporting local teacher education during his meetings with Prime Minister Keith Mitchell, Minster of Education Pamela Moses and Minister of Foreign Affairs Peter David. During the final meeting with the Minister of Education, the foundation for an MOU between Brock and Grenada was established to support local teacher education and study abroad opportunities for Brock students in Grenada.

The trip helped establish Brock on the global stage as a welcoming place for international students and as a University dedicated to being engaged global citizens by collaborating with international partners in areas that will have a positive societal impact.

Brock is poised to establish international partnerships that will benefit faculty, staff and students to advance research initiatives, faculty and student exchanges and transnational collaboration.