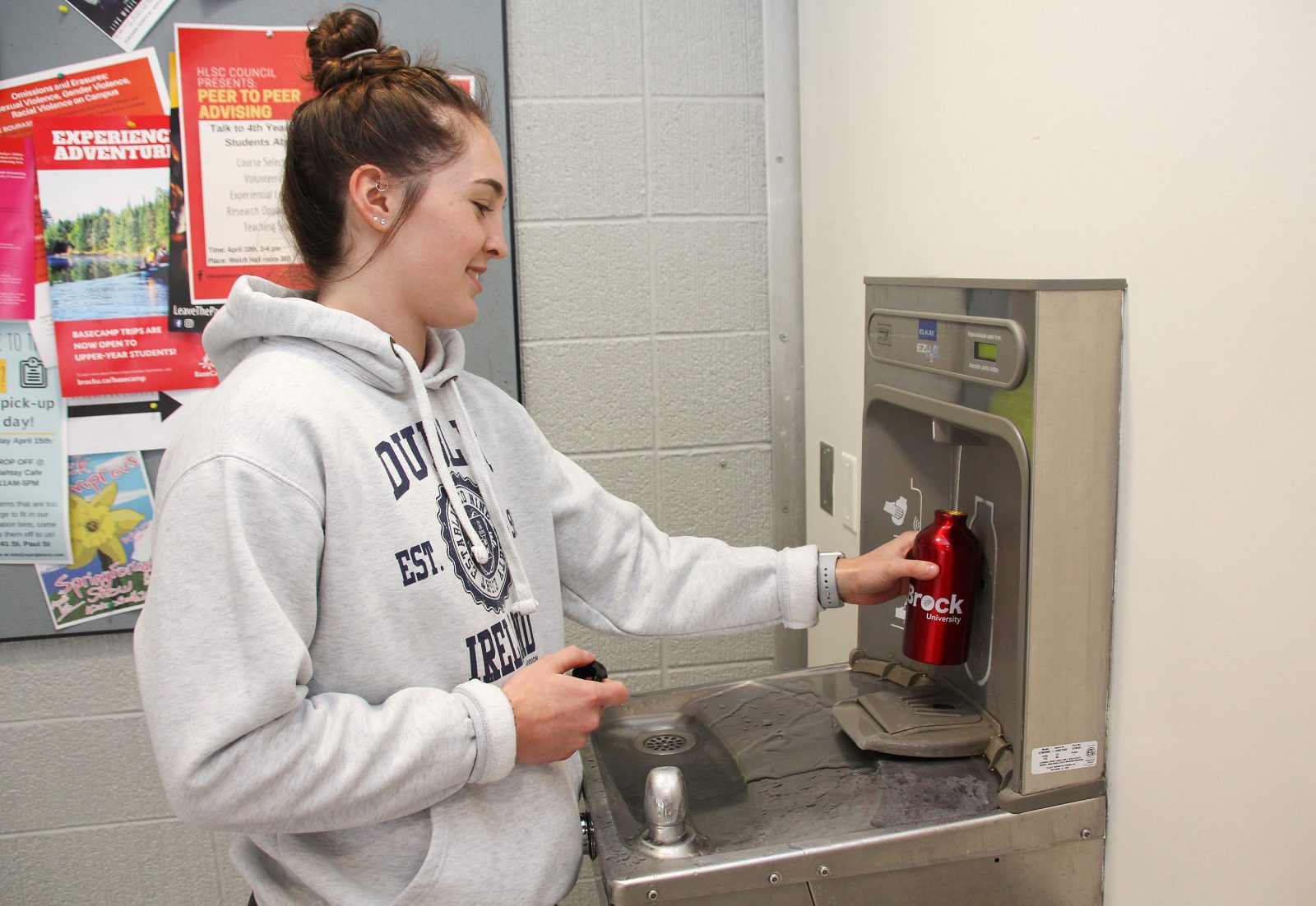 The scourge of plastic pollution has gone from being an issue of awareness to one of alarm, as our roadsides, greenfields and oceans are increasingly stricken with bags and bottles that will take centuries to break down.

As more people become aware of the urgency to reduce global consumption, Brock University is constantly striving to do its part — one bottle at a time.

Earth Day, coming up this Sunday, April 22, is an annual event, but some of Brock’s efforts are year-round initiatives as the University constantly reviews its conservation activities and sets its sights on future goals.

For instance, when Brock began installing water filling stations in 2014 as a way to discourage use of disposable plastic bottles, there were only eight stations for people to find. Today, there are 44.

In those four years, the program has kept the equivalent of more than 4.3 million bottles — or roughly 90 metric tonnes of plastic — out of landfills or ditches. This includes 930,343 bottles from the past year alone.

Brock has introduced four new filling stations since April 2017, and plans to install more in the coming year in hopes of diverting a million bottles a year by Earth Day 2019.

On an institutional scale, Brock recently entered the second phase of a massive multi-year project to update its co-generating power system, replacing 25-year-old facilities with modern equipment to produce electricity, heat and cooling for the campus. When finished, the new system will consume 26 per cent less fuel and reduce annual nitrous oxide gas emissions from 55 tonnes to eight, and hydrocarbons from 15 tonnes to four.

Other on-campus initiatives promote recycling, reusing or composting waste. Last year Brock diverted some 1,372 tonnes of waste from landfills, including 260 tonnes of organics, 414 tonnes of paper and nearly one tonne of disposable coffee cups.

The on-campus sustainability initiatives are now being spearheaded by a recently formed partnership between Facilities Management and Environmental Sustainability Research Centre. The two Brock entities have come together in an effort to engage the school community in year-round activities meant to help reduce the University’s environmental impact.

“We’ve done a lot and are committed to sustainability, but as a community we still have a lot to do,” said Scott Johnstone, Associate Vice-President, Facilities Management. “Every person on campus can be a part of it by making positive choices, whether that’s choosing the right bin for recycling, turning off a light when they leave an office or using the water filling stations instead of buying disposable bottles.”

Johnstone said a new long-term sustainability plan for Brock should be completed by the fall, and will map out future projects and goals.

Meantime, a new display in the Thistle corridor just outside the Matheson Learning Commons illustrates how garbage is impacting our planet, and how we can make a difference by disposing of it properly.

The show includes poetry, drawings and art made from litter found in the nearby woodlands — created in part by a group of children from the Forest School on campus. The display is based on a three-year study on the implementation of the school, which sees preschool-aged children immersed in nature by spending two mornings each week in an outdoor classroom. Led by Debra Harwood, an associate professor in the Faculty of Education, the research examines the experiences of children and educators in an outdoor learning and teaching environment.

The public display examines the ways in which “children’s immersion in nature provokes opportunities for thinking, learning and acting for sustainability,” Harwood said. 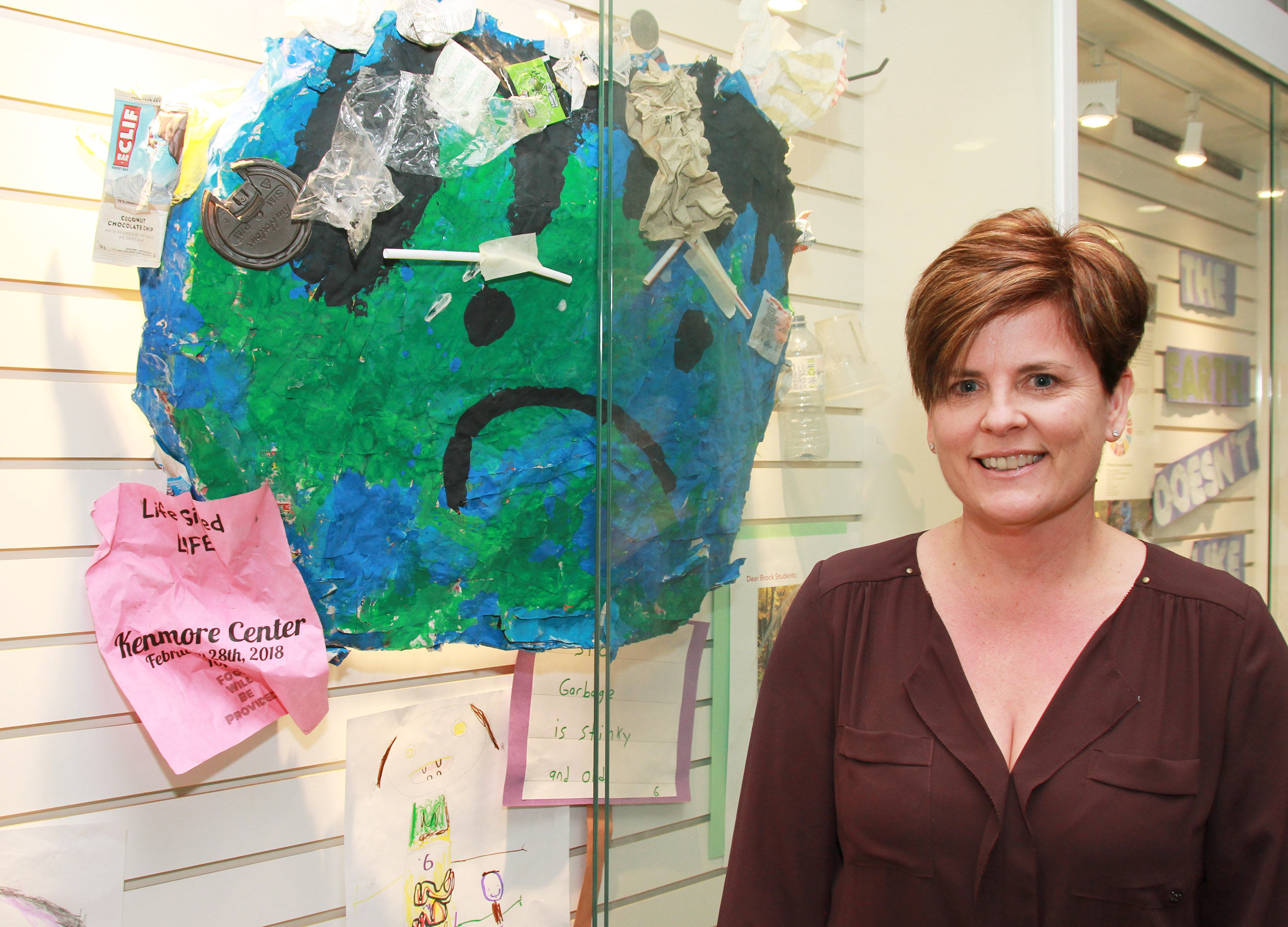 On display until mid-May outside of the Matheson Learning Commons is a showcase of environmental artwork created by children from the Forest School on campus. Debra Harwood, an associate professor in the Faculty of Education, helped to put the project together.