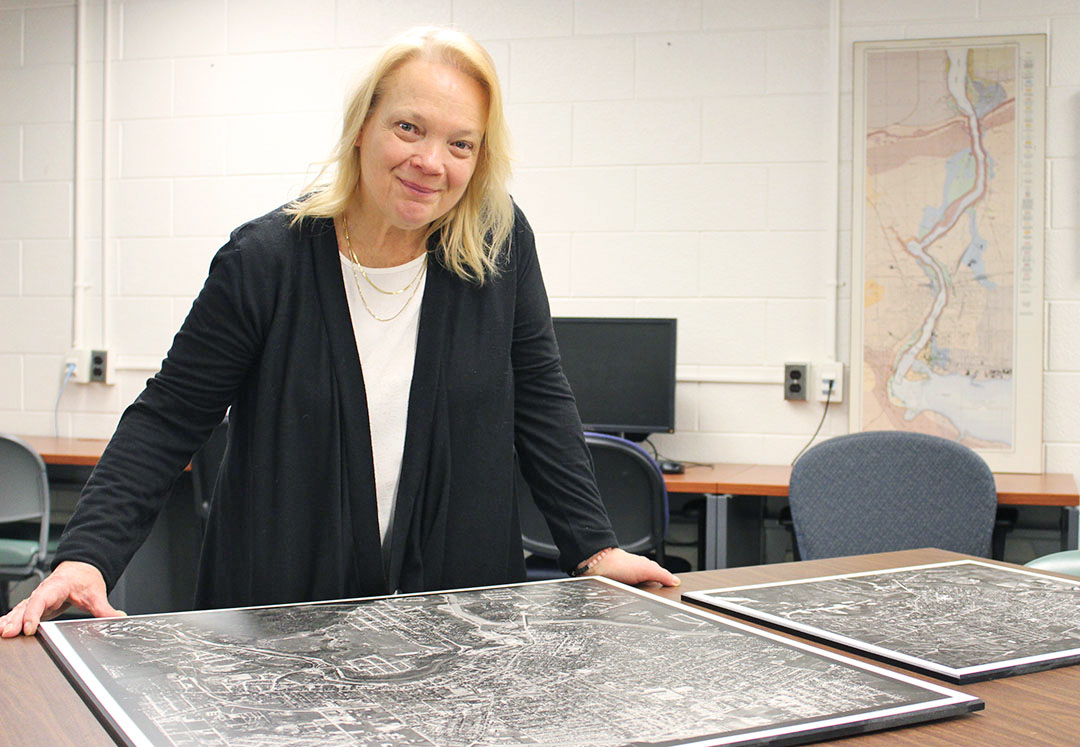 Colleen Beard examines aerial photography of the Welland Canals in Brock’s Map, Data & GIS Library. Beard will share her research at a public talk on April 3.

Hunting for buried shipwrecks and close calls with coyotes may not be the first thoughts that spring to mind at the mention of Thorold — or of digital mapping software. But they were among the adventures had by Colleen Beard during her research into the historic Welland canals.

Beard, Head of the Map, Data & GIS Library at Brock University, has spent the past eight years working both on the ground and buried in stacks of maps to create an open-source digital resource showing the routes of 19th century Welland canals as they would appear on today’s landscape.

On Tuesday, April 3, she will share her research in a public talk, “Mapping the Historic Welland Canals One Lock at a Time — My Story.” The presentation is the last in this year’s MA in Geography Speaker Series.

The research process, called Historical Geographic Information Systems, is characterized by the use of current mapping technologies applied to a historical subject.

“It is a relatively new area of research,” says Beard, “but it’s becoming very popular with colleagues across Canada.”

In the early stages of the project, Beard and her team focused on digitizing historical maps and aeriel photos, and then showcasing them using Google Earth. She detailed this phase of the research in a contribution to the 2014 book, Historical GIS Research in Canada.

More recently, she has created the Historic Welland Canals Mapping Project (HWCMP), an interactive ArcGIS Online web application that allows users to explore the now-mostly-hidden routes of the canals.

“Mapping the routes and features on the current landscape made me realize the vastness of these canals,” Beard says. “The amount of land that was occupied by water, mainly the weir ponds that engineered the locks, is expansive.

The project wasn’t without its challenges. In addition to her extensive archival research and digitization work, Beard hiked every metre of the three historic canals in St. Catharines and Thorold to document the landscape with local canal advocate, Rene Ressler.

“Scaling wing walls, traversing lock walls and dodging wildlife is all very exciting, though it has an element of danger,” Beard says. “Yet, it was necessary, in order to map every remnant of the canals that remains visible today.”

Beard gives much credit for the success of the project to the staff of the Map, Data & GIS Library, particularly Sharon Janzen for her geographic information system (GIS) expertise, and to Ressler, who captured many of the photos included in the project.

The fruits of Beard’s labour on the HWCMP have already been put to use. As she points out, “The digital map data created for the canals has been used by architectural students for 3D modelling of the canals, as well as faculty for planning a local archaeology dig of a ship buried on the bank of Twelve Mile Creek at the old Shickluna Dry Dock site.”

Beard, herself a graduate of Brock (BSc ’83), is also excited to use the HWCMP to showcase the ArcGIS geographic information system that allows users to tell stories about spatial information. ArcGIS, which can be mobilized to share many different kinds of research, is available to all members of the Brock community.

“If there is a story to be told, this technology is an easy way to share it,” says Beard. Assistance with ArcGIS is available from Map, Data & GIS Library staff.

What: Colleen Beard presents “Mapping the Historic Welland Canals One Lock at a Time — My Story”