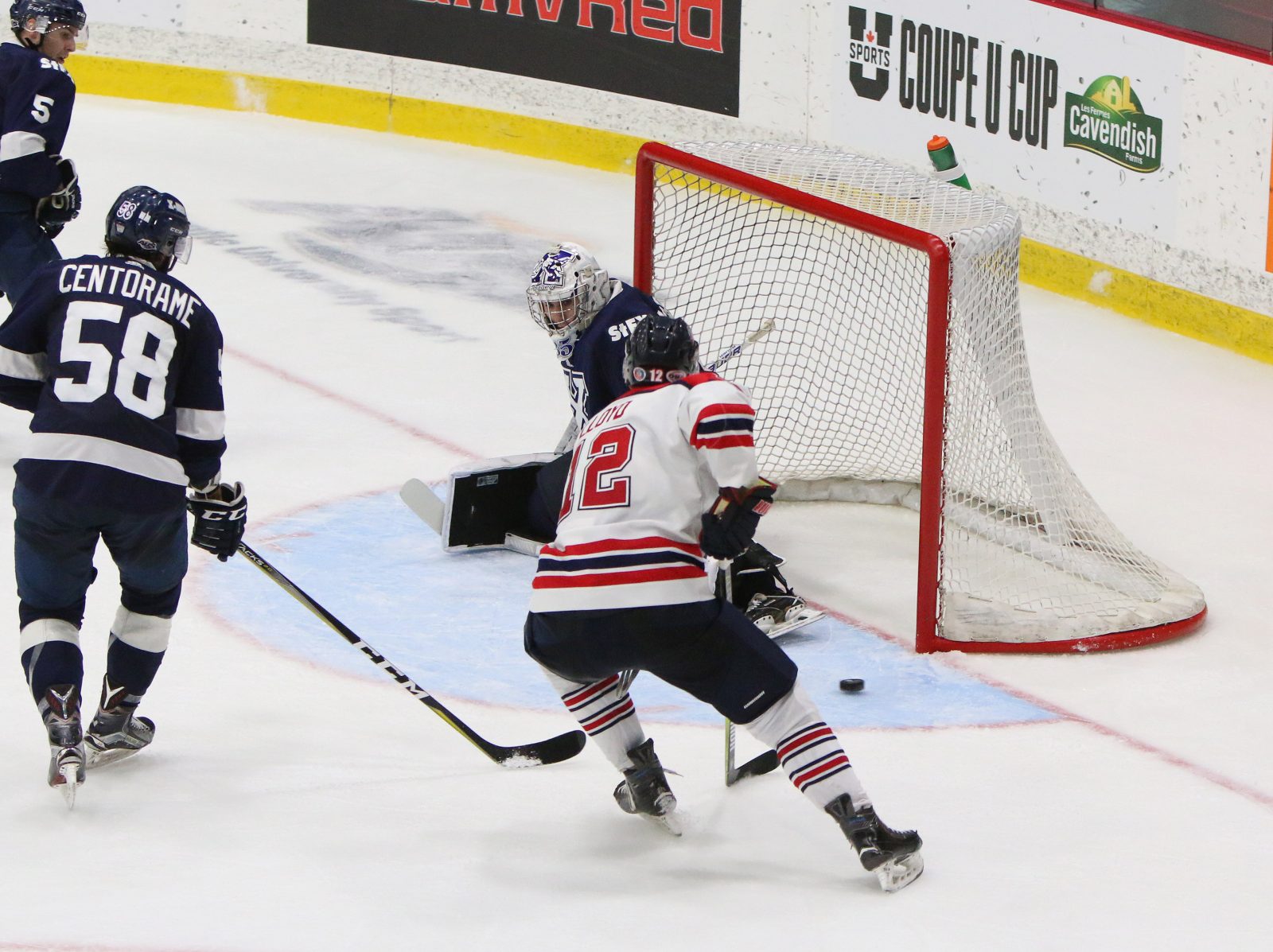 A Cinderella playoff run for the Brock Badgers has come to an end in Fredericton.

The Badgers were eliminated from the USPORTS Cavendish Farms University Cup National Championship Thursday with a 6-2 loss to the St. Francis Xavier X-Men. The fourth-seeded Badgers fought hard in a game that was far closer than the final score appears, but the fifth-seeded X-Men of Antigonish, Nova Scotia came out on top. 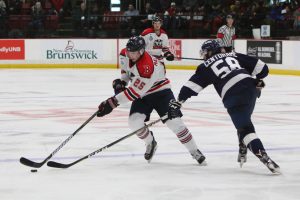 It brings to end a turning point season for the Brock men’s hockey team, which graduating player Matt McLeod, of Niagara Falls, says sets the bar for the future.

“We’re very proud of our season and proud of the fact we got here,” said McLeod. “For myself and the 10 other graduating players, it was something special to be able to have the season we did. Now, there’s a higher standard for Brock hockey. That’s something to be proud of.”

Brock was coached this year by Marty Williamson, a former Niagara IceDogs coach hired by the University in August. After a 14-9-5 regular season and a playoff run that included upset wins over Laurier, Guelph and York, as well as appearances in the OUA Queen’s Cup and now the USPORTS National Championship, Williamson said the team deserves to be proud.

“This team shouldn’t be judged on 60 minutes, it’s the body of work they did this season and how they came together,” he said. “They have done great things for me in terms of recruiting and they’ve set a standard for our hockey teams going forward.

“We want this to be a common occurrence that we give ourselves an opportunity and that’s what we did today.”

After falling behind 2-0 in the first seven minutes of the game Thursday at the spacious University of New Brunswick Aitken Centre, Brock answered back with goals from Braden Pears and Ayden Ma 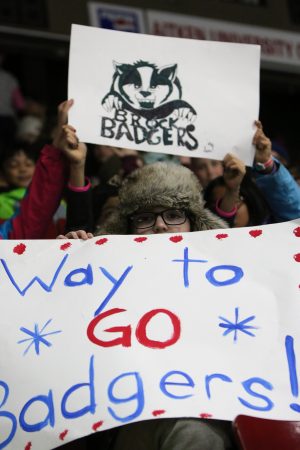 cdonald, who scored on a highlight-reel wraparound.

A breakaway goal by StFX’s Michael Clarke made it 3-2 late in the second period, but the game remained tight until the third period when the X-Men added powerplay, even-strength and empty-net goals to make it a 6-2 final. Also scoring for StFX were Holden Cook and Kristoff Kontos with two each and Craig Dunnick with one. Brock goalie Clint Windsor made 32 saves in the loss while X-Men keeper Chase Marchand, who won the USPORTS National Goalie of the Year title Wednesday night, made 23 saves.

“There are no regrets. We gave it our all,” said Windsor, who won the OUA Goalie of the Year title. “Against all odds, we made it here. Obviously it would have been nice to end the season on a win, but unfortunately we fell short. But there’s lots to be proud of this year.”

As one of the 11 graduating Badgers, Windsor said he was happy to go out with a strong season.

“This year was huge. The guys helped me out so much and made my job easy. I’m ending on a good note personally and as a team, so that’s the best way you can imagine it,” he said.

Because the USPORTS men’s hockey national championship is a single-game knockout, the Badgers will now have to watch from the sidelines as the tournament continues. Quarter-final games continue until Friday night, with the semifinals set for Saturday and the medal round Sunday.

NOTES: While Brock didn’t have as large of a cheering section as it did at home for the Queen’s Cup Saturday, hundreds of students from Fredericton elementary schools were in attendance at Thursday’s game. They were divided into StFX and Brock cheering sections and came armed with homemade signs and cheered to the end. 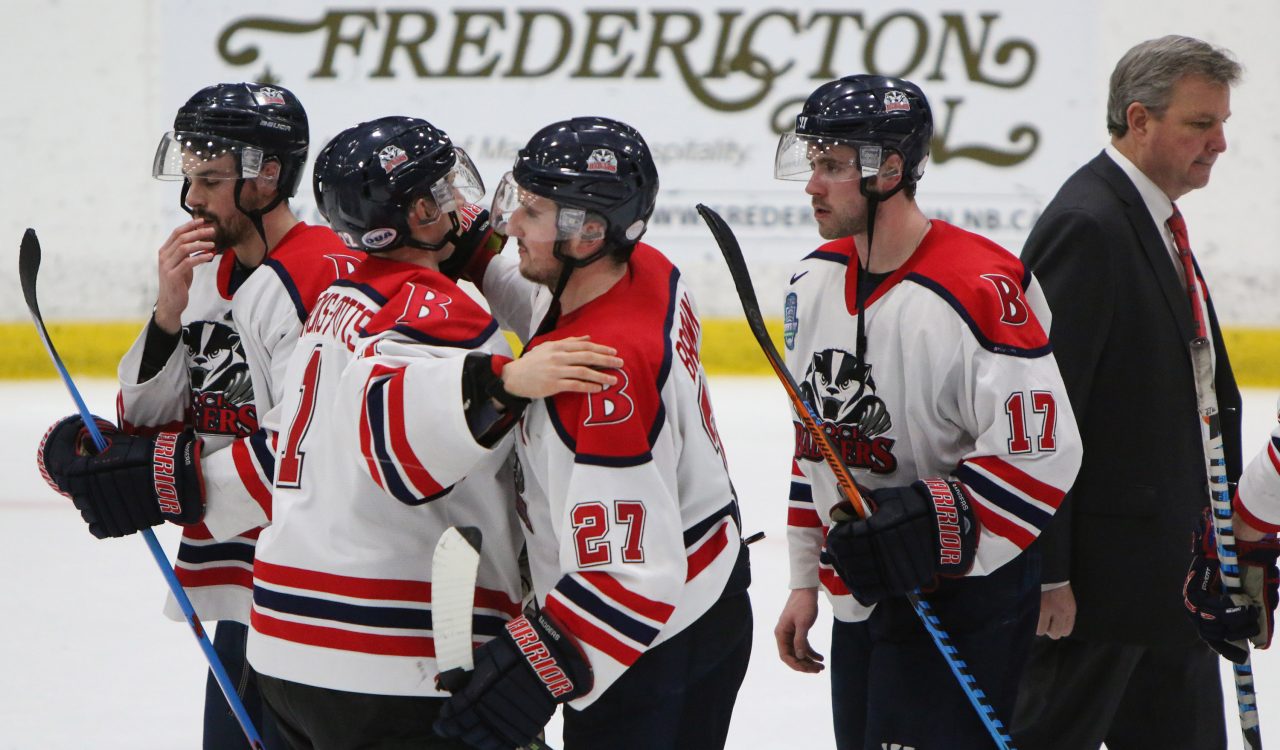 Brock Badgers players console each other after being eliminated from the USPORTS University Cup National Championship tournament in Fredericton Thursday, March 15.