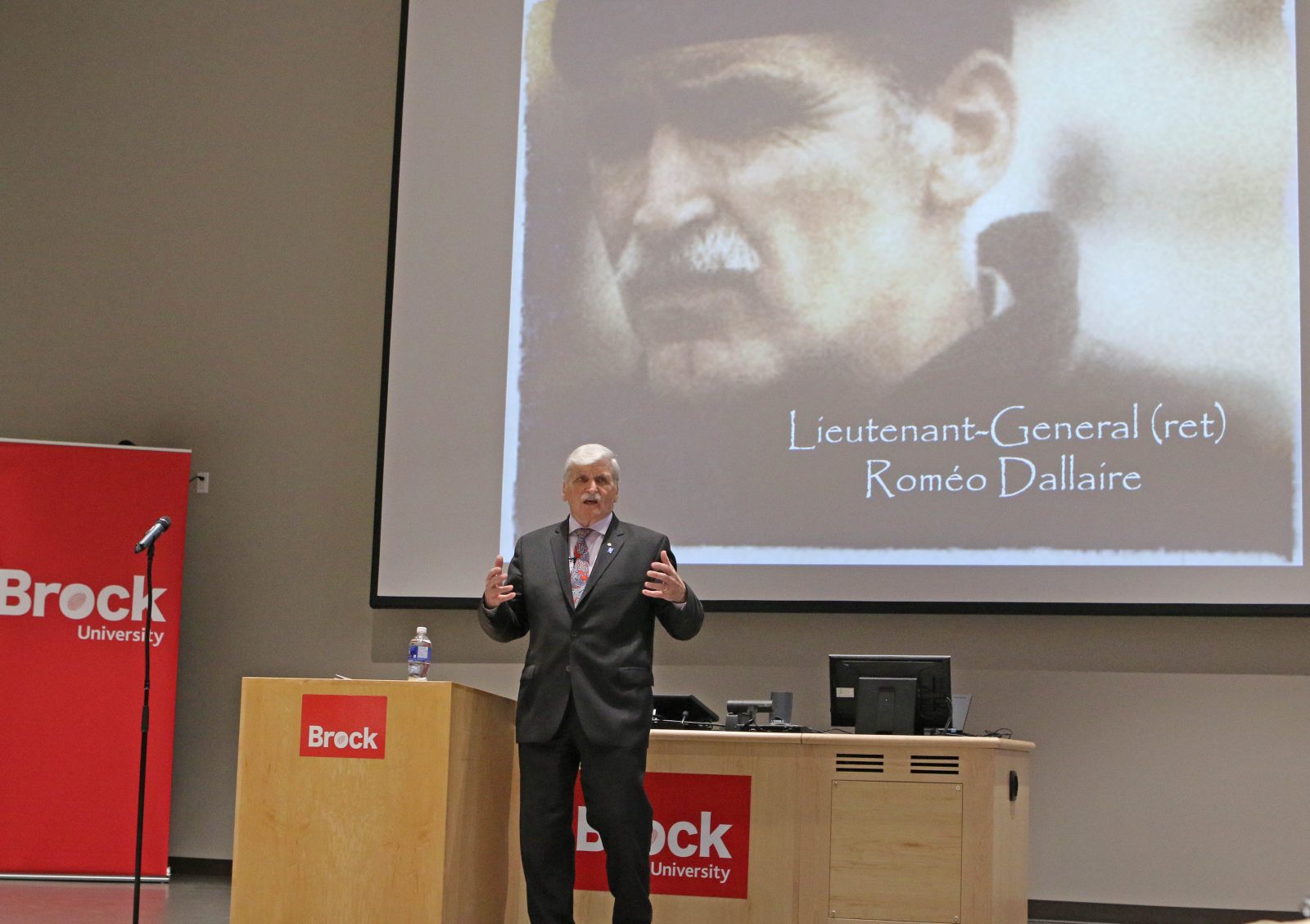 We as Canadians must do a better job of both recognizing and supporting those around us who are struggling with mental health.

That was the message from Lieutenant General the Honorable Roméo Dallaire as he addressed a crowd at Brock University to mark International Day of Persons with Disabilities on Friday, Dec. 1. 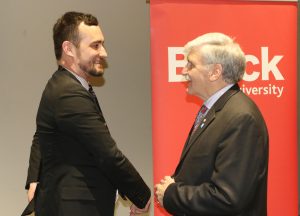 Speaking to a large crowd at the University’s Sean O’Sullivan Theatre, Dallaire told graphic stories of his time serving as Force Commander of the United Nations peacekeeping effort during the Rwandan genocide in 1993-94, and what impact that and other conflicts have on veterans like himself.

“The injuries they had in combat were not bullet wounds or shrapnel, the injuries were between their ears,” said Dallaire. “They came home and nobody understood them and they couldn’t get the support. As such, the walking wounded got worse, the wounds grew deeper and they ultimately destroyed themselves.”

Dallaire has struggled with post-traumatic stress disorder since the peacekeeping mission and is now a champion for veterans’ mental health.

“I wasn’t the same person I was when I left for Africa,” he said. “The individual who my wife married was not the same person who came back. There was somebody different who had been affected deeply and significantly. How can you live with that? How can you adapt to that?”

Dallaire’s talk at Brock was spearheaded by Chris Lytle, the University’s Accessibility for Ontarians with Disabilities Act Co-ordinator, who wanted to bring attention to the fact that invisible disabilities like mental health, which often don’t get the same recognition, are still disabilities. 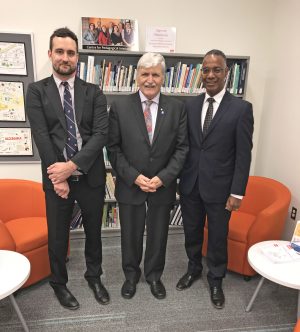 “I think it’s huge to have General Dallaire here at Brock. It’s not in Toronto or in another province, it’s happening right here in the Niagara region. It’s a huge opportunity for us to look at this information and have conversations to go forward and make systemic change,” he said. “Other places will look to Brock’s leadership for having done this.”

During his hour-long address, Dallaire challenged the leadership of colleges and universities to do a better job of taking care of their students.

“The student body faces an enormous amount of strain and pressure. The question is, are we recognizing that pressure? Are we giving them the tools to build resiliency to handle it?” he asked. “If you’re bringing them to the institution, the institution must be prepared that it’s creating casualties. They have got to take care of them.”

He encouraged schools to be inclusive and nurture peer support. 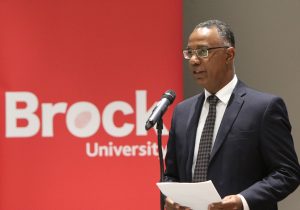 “Peer support is crucial in order to handle the complexities of our times,” he said.

Friday’s talk drew a large audience of Brock students, faculty and staff, as well as many from the wider community.

Katy Sniderhan heard about Dallaire’s visit from her brother, a Brock student, and made the four-hour drive from outside Belleville to hear the General speak.

“I learned about the Rwandan genocide in Grade 9 and have been following him ever since. I’ve been wanting to see him for years,” she said. “Because of what he did, I started doing mission work. It really inspired me to help people wherever I can.”

At the end of the event Friday, Dallaire was presented with a Convo Plate by Brock President Gervan Fearon. The symbolic plate is part of a nationwide movement meant to spark conversations about mental health. 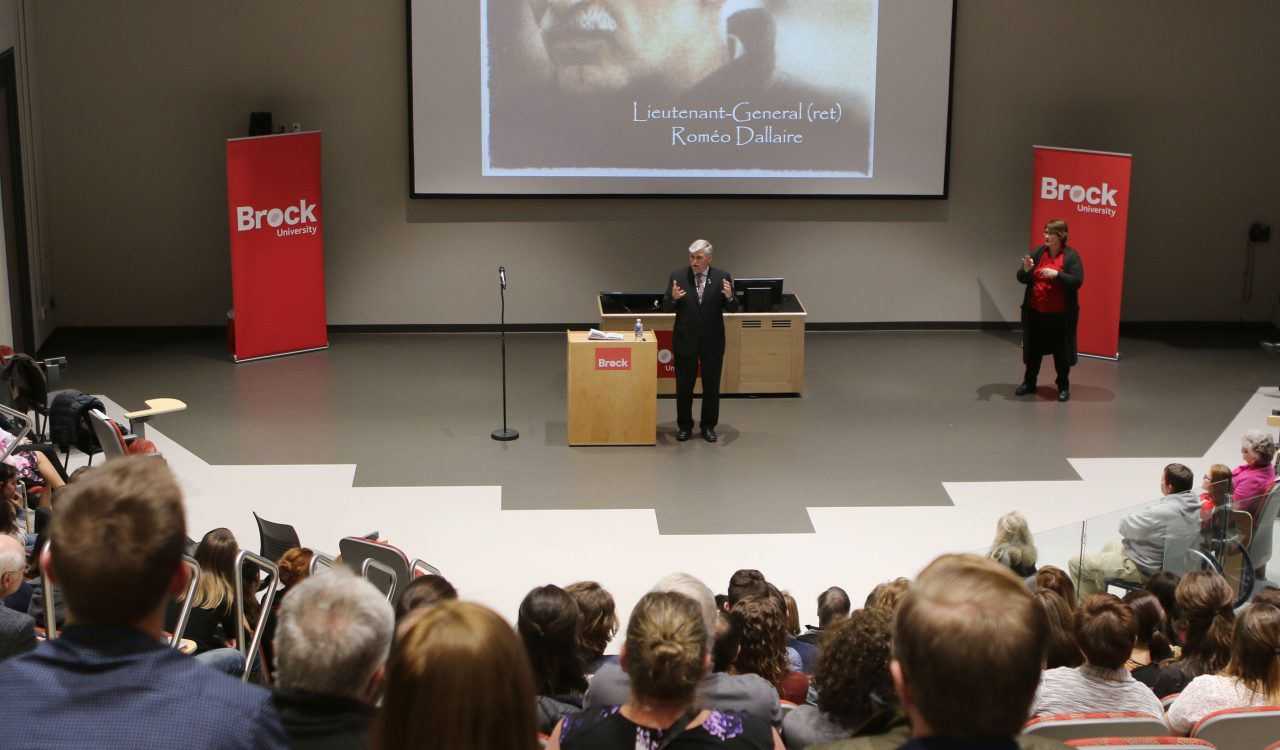 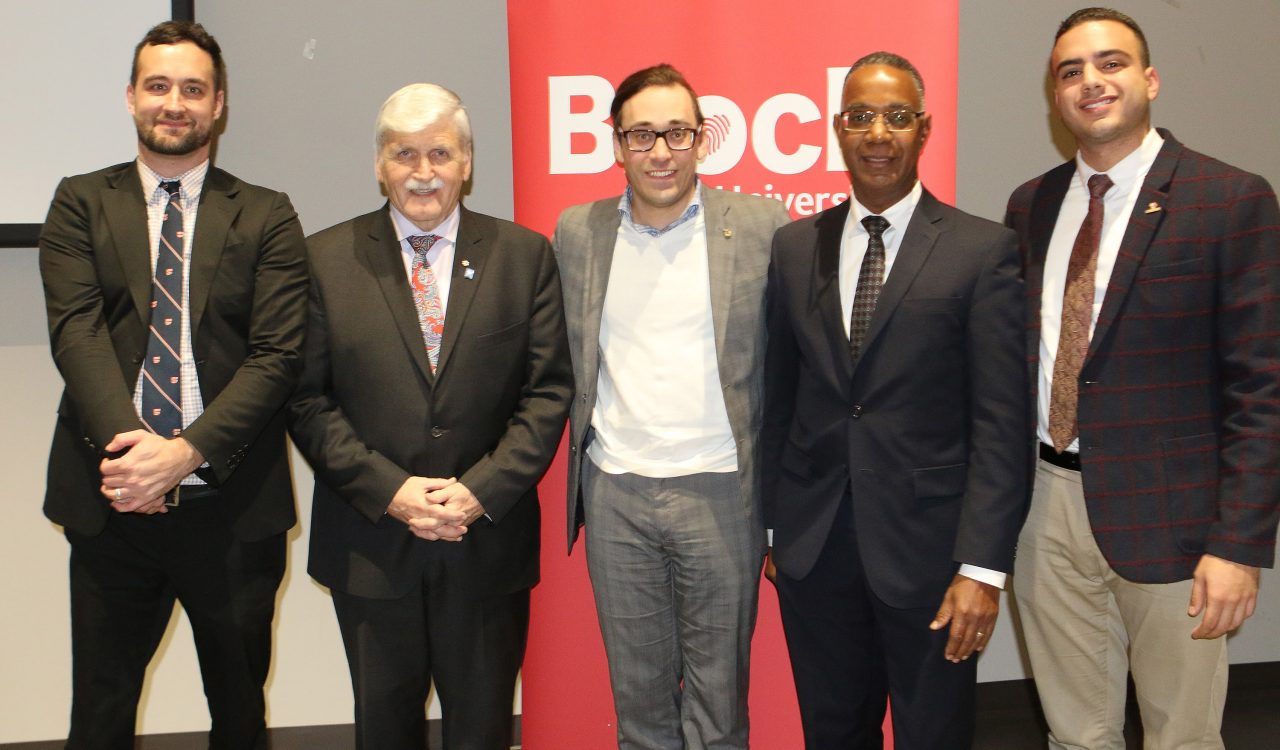