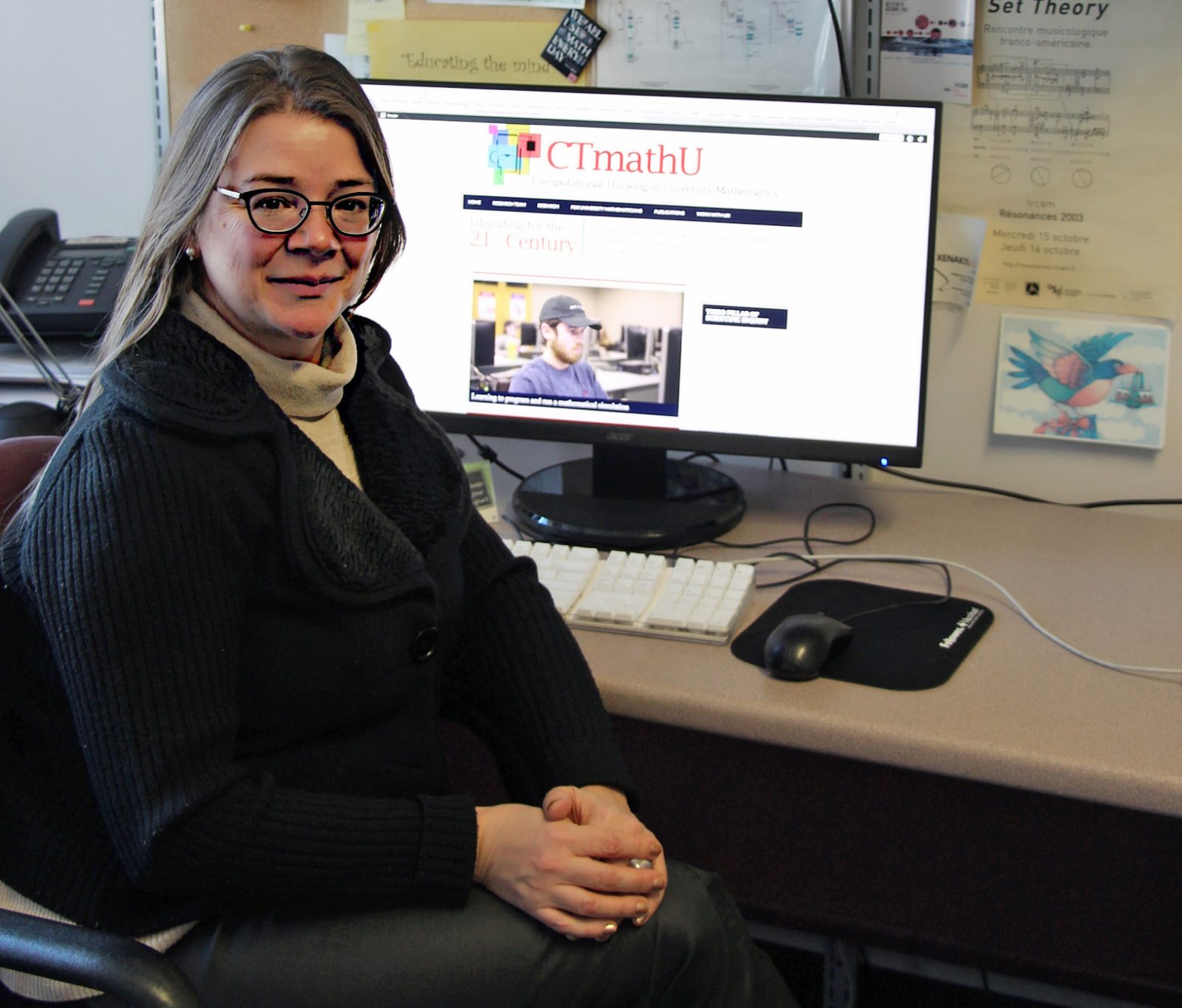 Chantal Buteau, Associate Professor in the Department of Mathematics and Statistics

When it’s raining outside and you want to stay as dry as possible, is it better to walk in the rain, or run?

It’s a question that wouldn’t be tackled in traditional ‘paper and pencil’ undergraduate mathematics courses, but educators at Brock University are teaching their students how to tap into the power of computers to model, simulate, visualize and choose the best alternatives in calculations.

“It’s using computer programming as an instrument to engage in mathematics investigations,” says Chantal Buteau, Associate Professor in the Department of Mathematics and Statistics.

“It’s taking a scientific, experimental approach to mathematics: asking questions, conjecturing, testing math problems or applications with programming and seeing the outcomes through computer simulations, then further tweaking the problem or model to continue the math work,” she says.

European Mathematical Society’s view that, beyond theory and experimentation, “a third pillar of scientific inquiry of complex systems has emerged in the form of a combination of modelling, simulation, optimization and visualization.”

Brock is the exception.

Buteau teaches in the sequence of Brock’s Mathematics Integrated with Computers and Applications (MICA) undergraduate courses. Created in 2000 under the leadership of Ralph, this sequence of MICA courses is the only one of its kind in Canada.

“It’s really outstanding that Bill Ralph and the Department of Mathematics had that vision ahead of their time,” she says, adding it’s only recently that integration of coding in school curricula around the world has started to increase.

Buteau is heading a research team, funded by the Social Sciences and Humanities Research Council of Canada (SSHRC), to study how MICA students learn to use computer coding for their mathematical investigations.

The issue is not just academic. She notes that a number of mathematicians are already taking this approach and that “it seems natural to expose our students with this cutting-edge way of doing mathematics.”

To answer the question of whether or not to run in the rain to stay as dry as possible, in 2005, second-year student Kylie Maheu and third-year student Matthew Lillie produced a project called Running in the Rain.

They wrote a computer program “to create a two-dimensional and three-dimensional simulation of running in the rain and to investigate the number of raindrops that will hit a person at various rain, wind and running velocities,” Maheu and Lillie wrote on the MICA webpage.

“We found that how wet you get depends on the direction that the rain is falling.

“When there is no wind involved, or if the rain is falling in the opposite direction as you’re walking, then it is better to run as fast as you can rather than walk.

“However, when wind is involved the best speed varies. If you’re walking in the same direction as the rain, you stay driest by moving at the same speed as the rain,” said the students.

Buteau says her SSHRC-funded research aims to deepen knowledge of how post-secondary students learn and use computer programming with mathematical approaches such as the ones Maheu, Lillie and other MICA students experienced.

Other members of Buteau’s research team include Associate Professor of Mathematics Education Joyce Mgombelo, Professor Emeritus of Mathematics Eric Muller and Ana Isabel Sacristan Rock, researcher at the Center for Research and Advanced Studies of the National Polytechnic Institute in Mexico City.

Buteau, Mgombelo and Muller will discuss their research program on Jan. 15 from 10 to 11 a.m. at the opening talk of the Math Ed Seminar Series at Brock in TA403.

Buteau is also a co-investigator on another SSHRC research project, “Computational Thinking in Mathematics Education,” led by Western University. That research looks at integrating coding in pre-school to undergraduate mathematics, including mathematics teacher education.