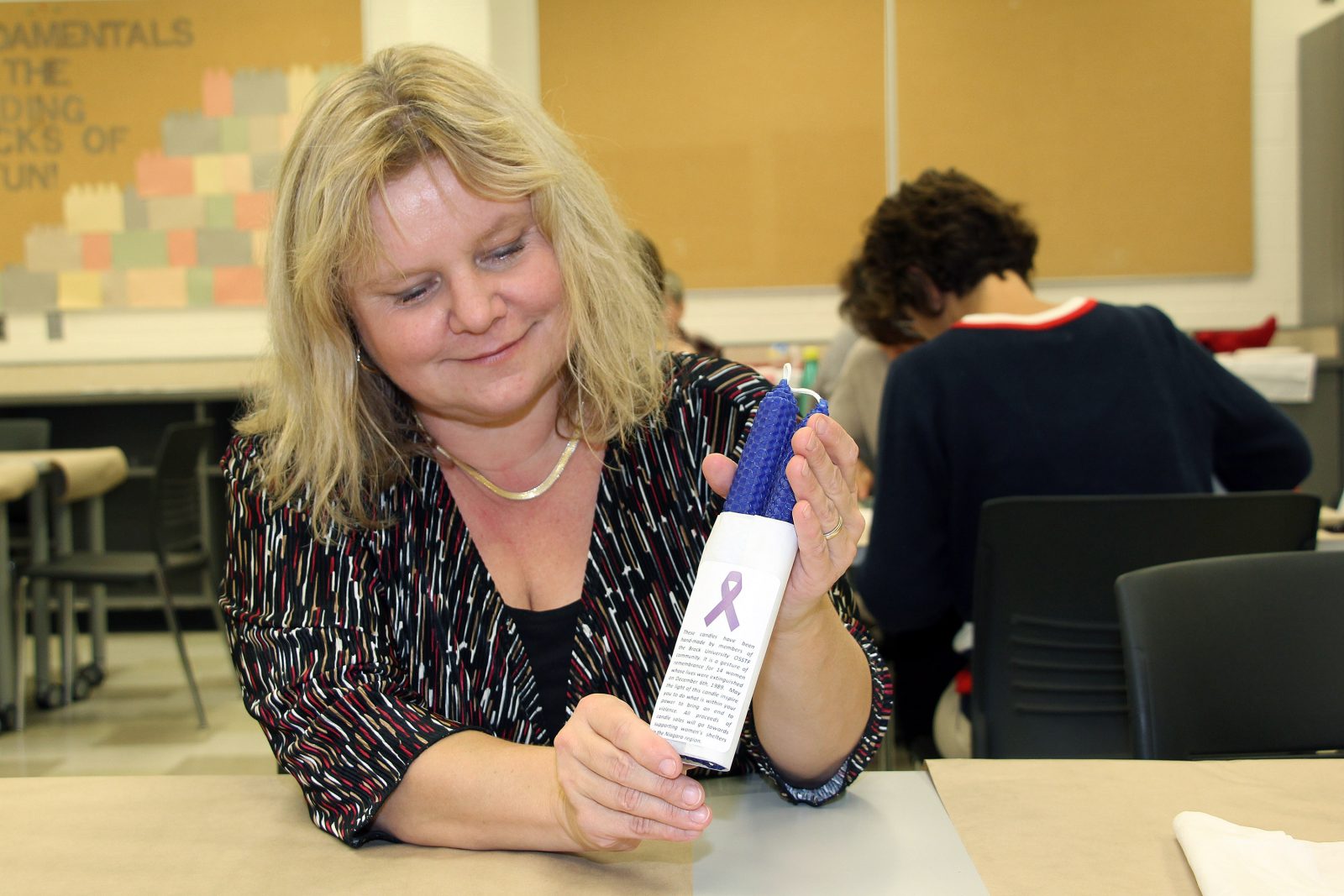 Violetta Clitheroe, an administrative assistant for Brock’s Department of Modern Languages, Literatures and Cultures and a survivor of childhood abuse, is organizing a fundraising initiative in commemoration of all women affected by gender-based violence.

Violetta Clitheroe grew up in fear of her father.

While most children find comfort in returning home each day from school, Clitheroe’s home was no safe haven. She preferred to be anywhere else, finding solace in sports and academics, and cautiously keeping her nose in a book rather than risking a family confrontation.

For as long as she can remember, Clitheroe was physically and emotionally abused by her father. Her mother and younger sister also fell victim to his violence.

Decades later, the administrative assistant for Brock’s Department of Modern Languages, Literatures and Cultures is sharing her story and organizing a fundraising initiative in honour of all women affected by gender-based violence.

Clitheroe lived in what many would consider a nice house. From the outside looking in, everything seemed fine, “but on the inside it was like walking on eggshells, a true living hell,” she said.

While her mother worked long hours, Clitheroe’s father instead spent much of his time at home critiquing the everyday actions of his wife and children.

If Clitheroe received a poor grade on a school paper or didn’t clean the house to her father’s standards, he would physically punish her. Her father recorded everyone’s phone conversations and if he heard something he didn’t like, “you had better beware,” she recalled. On the rare occasion she was allowed out, if she came home five minutes after curfew, her father was waiting for her, ready for a fight.

“I never knew what to expect when I came home,” she said. “Whether it was going to be a good day or a bad day.”

The worst days involved the police. However, little ever came from their involvement, as Clitheroe’s mother never pressed charges. Without the ability to drive or control the household’s finances, her mother was too afraid to take a stand. She feared leaving would put her life and her children’s lives at risk.

Then one day, 17-year-old Clitheroe took matters into her own hands.

“It was always in the back of my mind that I would leave one day,” she said. “And that’s what happened. I came home one night — not even that late — and he was up waiting for me. Abuse started, so I just left and never came back.”

Clitheroe found temporary refuge house-sitting for an elderly couple while they were out of town. When they returned, she checked into a women’s shelter, where she remained for several weeks while working to acquire affordable housing for her sister and mother.

“There are long waiting lists. But if you go to a shelter first, you can usually get something within a month,” she said.

Once the application process was complete, Clitheroe returned to live with the elderly couple while she completed her high school education.

“They were a godsend,” she said.

After Clitheroe left, her mother and sister followed suit. They left their family home a month later to live in affordable housing, but didn’t stay long. That summer, Clitheroe’s father died and the estate was left to her mother.

Her sister and mother moved back home and Clitheroe continued her education at the University of Waterloo before moving to Calgary to start a new life. Three years ago, she returned to Niagara. She’s been at Brock since July 2015.

Clitheroe hasn’t shared her experiences with many people, but she’d like to start. She said the positivity she’s gained from life is a result of her forward-thinking attitude, not of recalling her past.

“I don’t really like looking back,” she said. “But I want to put a positive spin on my story. Domestic violence is everywhere and sometimes you don’t hear about it. I don’t want to cover my head and hide. I don’t want to be a statistic.”

Commemorative candles will be available for sale Wednesday, Dec. 6  — the National Day of Remembrance and Action on Violence Against Women — in memory of the 14 young women who were murdered in 1989 at l’École Polytechnique de Montréal as a result of gender-based violence. 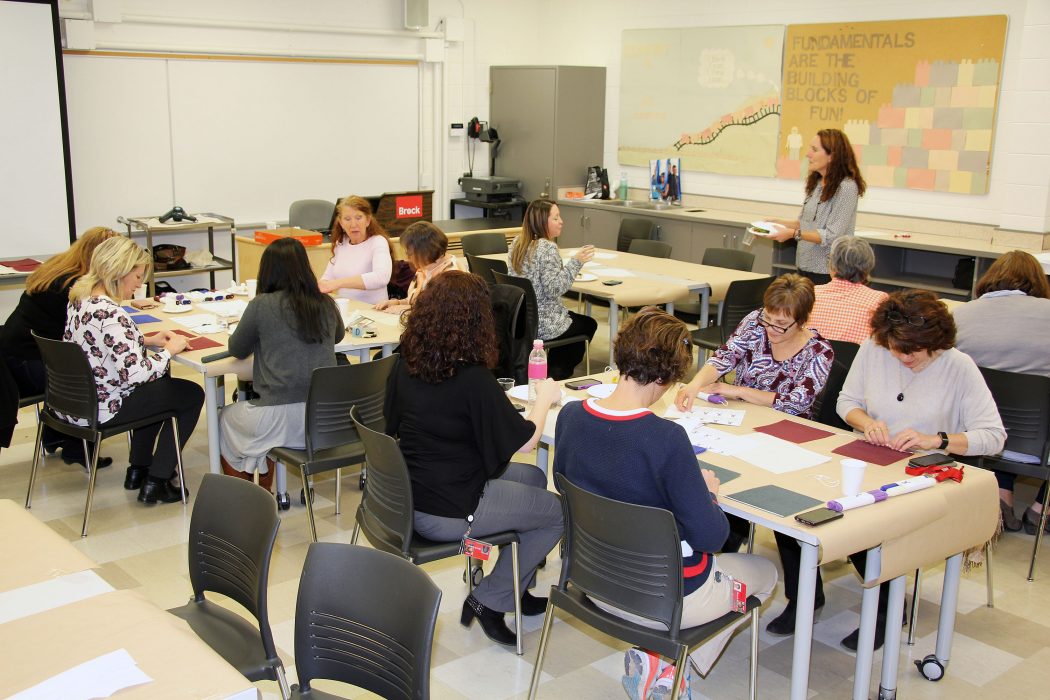 Hand-rolled beeswax candles created by volunteers will be sold this week to raise funds for Gillian’s Place, a local women’s shelter.

Candles are $5 per pair and proceeds will support Gillian’s Place, a local women’s shelter. They’ll be available for purchase from 10 a.m. to 2 p.m. outside of Sean O’Sullivan Theatre and from 11 a.m. to 2 p.m. outside of Academic South room STH 216, where Brock Assistant Professor Robyn Bourgeois will speak about violence against indigenous females and will share her story of being trafficked for sexual exploitation.

The locally made beeswax candles are being hand-rolled by OSSTF volunteers over their lunch breaks. Two sessions have already taken place Nov. 21 and 28. The final session is Tuesday, Dec. 5 in WH 327 at noon.

Clitheroe encouraged the Brock community to remember those who have died as a result of gender-based violence.

“Remembering this horrific event has become an important tenant in recognizing and supporting action against widespread violence committed against women in our society,” she said of the Montréal massacre.

According to Statistics Canada, violence against women in Canada is five per cent higher than the rate of violence against men. For every 100,000 people, 1,207 women and 1,151 men reported violent offences to police in 2011.

One third of Canadians aged 15 and older experienced some form of child mistreatment before age 15. Mistreatment includes physical and/or sexual abuse by someone aged 18 or older, and/or witnessing violence by a parent or guardian against another adult.

Despite these statistics, Clitheroe is optimistic for the future.

“As of mother of three young girls, I am hopeful that society is slowly changing for the better. It has to.”