Badgers lose on the scoreboard, win in the stands 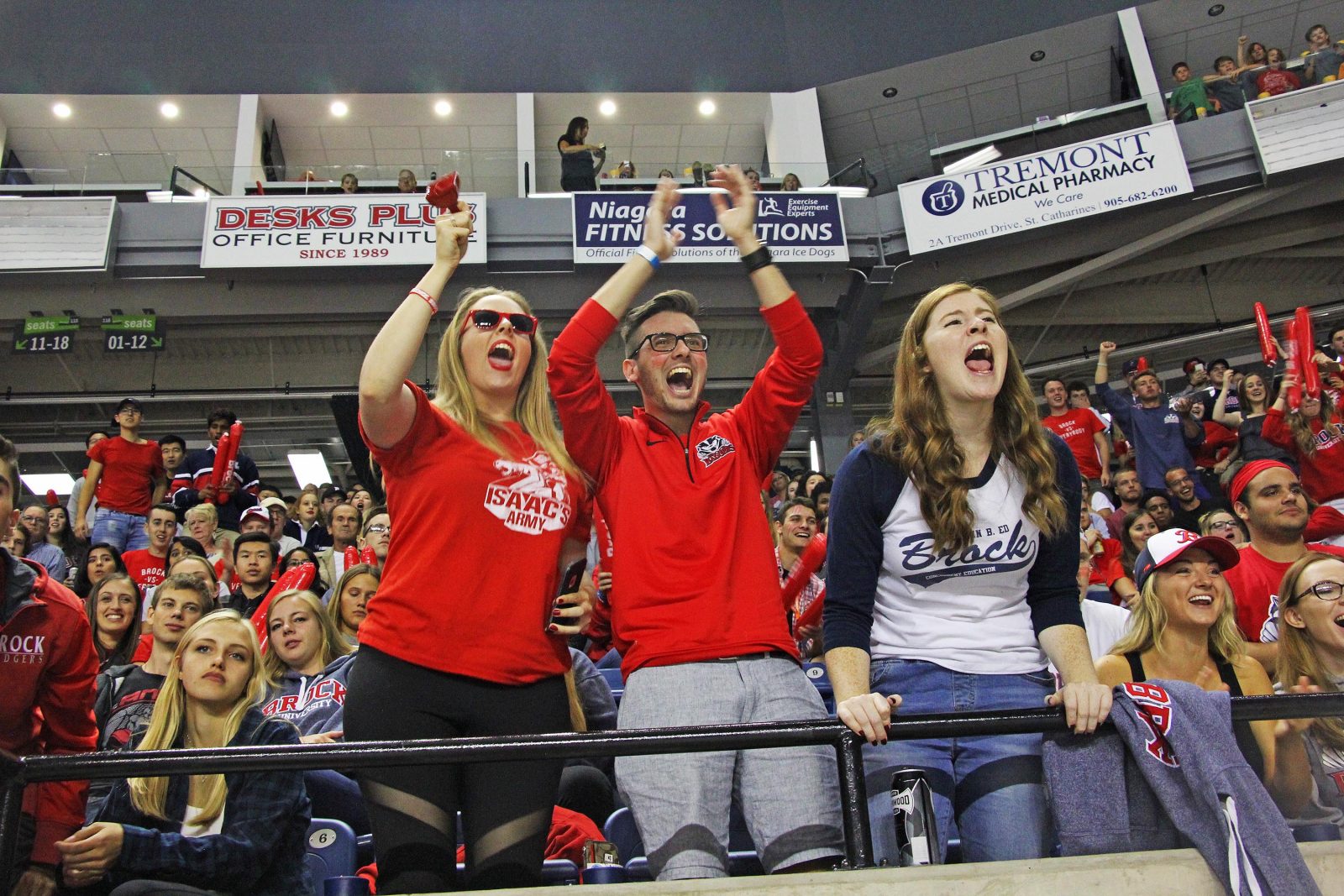 A record crowd of 4,975 people watched the Steel Blade Classic Friday night at the Meridian Centre in downtown St. Catharines.

Wearing throwback jerseys in honour of their history, the Brock Badgers men’s hockey team made their own history Friday night at the Meridian Centre.

Much to the disappointment of the massive sea of red-clad students that filled the downtown St. Catharines arena for the Steel Blade Classic, the Badgers lost 5-3 to the Guelph Gryphons in the game, but it was a win for university sports.

With 4,975 people in attendance, the Badgers set the record for the biggest crowd ever for a Brock sporting event, and set a new record for highest attendance ever at a university hockey game held in Ontario.

To Brock Sports Director Neil Lumsden, that was victory enough.

“What we’re trying to do is raise the standard so everyone has to do the kinds of things we’re doing, and that’s hosting showcase events,” he said. “This is what we’ve managed to do in two years because of great student and community engagement.”

The game kicked off with a Homecoming Weekend Tailgate Party in the parking lot of Brock’s Marilyn I. Walker School of Fine and Performing Arts across the street from the Meridian Centre, and continued a series of Brock ‘home games’ at the downtown arena for varsity hockey and basketball.

“Events like this create a great profile. It shows people who are thinking about coming here that this is a university with a great location, high-level academics and athletics and better student engagement than maybe anyone else,” Lumsden said.

The Steel Blade Classic was a homecoming of sorts for Badgers coach Marty Williamson, who took over the men’s hockey program last month. Williamson coached the Niagara IceDogs for six seasons until May 2016.

Friday night’s game was the first time behind the home bench at the Meridian Centre for Williamson since then, and he said it was a memorable experience.

“It felt great. I don’t know that I’ve ever been on that bench when I couldn’t talk to my players because it was so loud,” he said. “It was just unbelievable support from the Brock students.”

The Badgers got off to a great start — opening up the scoring just 33 seconds into the first period when Conor Brown scored — but Guelph responded with four unanswered goals in the second period. Michael Stevens, Trevor Morbeck, Cody Thompson and Scott Simmonds all scored for the visiting Gryphons to slightly quiet the boisterous Brock crowd.

The Badgers weren’t done, with Brayden Stortz and Chris Maniccia each scoring in the third period for Brock to bring the game within a goal, but an empty-netter by Guelph’s Seth Swenson made it a 5-3 final for the Gryphons.

“We’re very disappointed with our second period,” Williamson said. “That put us in a big hole. It took a lot of character to get it back to 4-3, and we had an opportunity, but we just have to learn it’s a three-period game.”

The coach said a high-energy contest like the Steel Blade is a good way to start the season.

“When you get a crowd like this, it just gives the whole game a playoff feel to it. That’s good breeding ground. That’ll help us down the road,” he said.

The game also served as a 50-year anniversary for men’s hockey at Brock. The Badgers wore throw-back Generals jerseys in honour of the original name of the school’s varsity teams. Many of the players from the first-ever men’s hockey team back in the 1967-68 season were in attendance at the Meridian Centre.

Watch the opening face-off and first Badgers goal below in full 360-degrees: