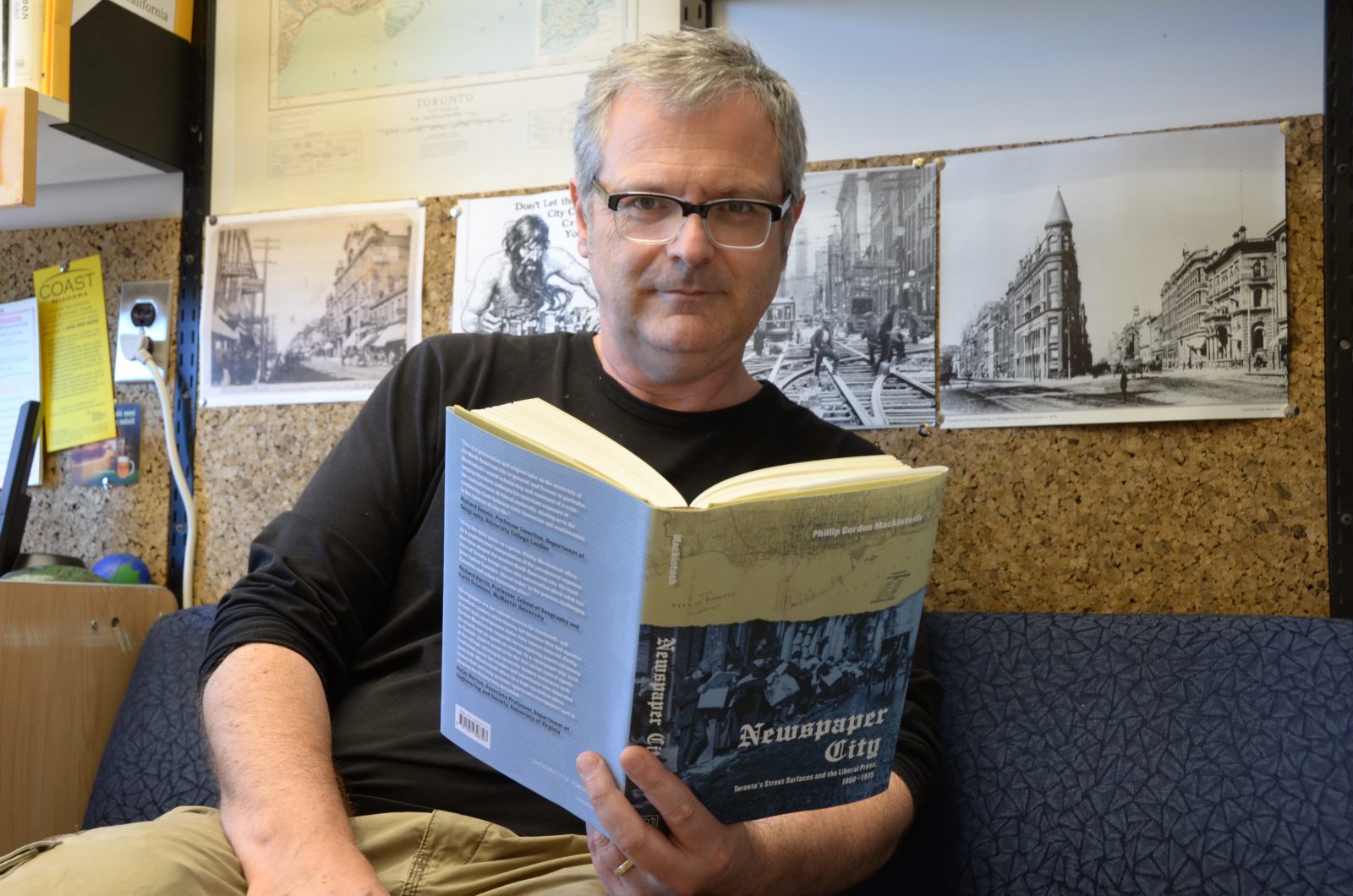 If anyone doubts the power of the press, think again.

Liberal newspapers were the main driver of Toronto’s street development during the turn of the 20th century, says Brock University Associate Professor of Geography Phillip Mackintosh.

“They had an agenda to create public opinion around, and then generate capitalist interest in infrastructure,” says Mackintosh when describing the book he published earlier this year.

In the book, Newspaper City: Toronto’s Street Surfaces and the Liberal Press, 1860-1935, Mackintosh argues that the Toronto Globe and Toronto Daily Star campaigned heavily for streets to be paved in downtown Toronto, mainly to increase business for their advertisers, who had shops and factories along those roads.

“The newspaper industry made more money through advertising than it did through subscriptions, and that advertising enabled them to pay journalists more to get involved in muckraking,” explains Mackintosh.

The campaign to pave was a tough sell. Many people during the Victorian, Edwardian and interwar periods resisted the idea of having to pay to develop these streets through the local improvements by-law. The majority were okay with wood and gravel roads, the book argues.

“The city was made up of a cross-section of people, most of them being middle class and under,” says Mackintosh. “Their ability to tolerate inconvenience was remarkable, so the liberal papers had to create pictures in peoples’ heads of a progressive city.”

These ‘pictures’ included articles that presented two scenarios: “One depicted the status quo, with dirty, dangerous streets overrun with animals and unsavoury people; the other envisioned progress, with clean, civilized modern thoroughfare suitable for bourgeois society,” says the book.

While the campaign resulted in the construction of asphalt roads, concrete sidewalks and regulated traffic in downtown Toronto, it also laid the groundwork for the press to become the liberal “fourth estate,” championing democracy and growth while making a profit, says Mackintosh.

That part of Toronto’s history highlights newspapers’ strong influence in molding readers’ perceptions of the city as a whole and especially certain neighbourhoods.

Mackintosh gives the example of reporters going into the “Ward,” which at that time, was the poorest part of the inner city. The neighbourhood is located in the area now bordered by Yonge, University, Queen and College streets.

They would write about the squalor, crime, dirt and bad environment of that part of town, even though “there were all kinds of hard-working people and shop owners, but that’s not how the reporters saw it.

“They reproduced the city in text for the readers, and the readers used their geographical imaginations to reproduce that city in their own heads. Suddenly the city was not the city they thought they lived in,” explains Mackintosh.

He says Newspaper City provides another way to think of present-day “fake news” discussions and certain media whose sole purpose is to make a profit.