Maureen Sabia, Chairman of the Board for Canadian Tire Corporation and David Kanatawakhon-Maracle, an instructor of Mohawk language, will receive honorary degrees from Brock University during Spring Convocation.

One of Canada’s most powerful female business leaders and a man who has made it his life’s work to teach the Mohawk language will receive honorary degrees next month at Brock University’s Spring Convocation.

Maureen Sabia, Chairman of the Board for Canadian Tire Corporation, will receive an honorary doctorate during the Goodman School of Business convocation ceremony Thursday, June 8, while David Kanatawakhon-Maracle, a former Brock instructor who has literally written the book on the Mohawk language, will be conferred on Friday, June 9.

Spring Convocation will include nine ceremonies over five days, from June 5-9, in the Ian D. Beddis Gymnasium at Brock University’s Walker Sports Complex. Ceremonies will take place at 10 a.m. and 2:30 p.m. each day except for Friday, June 9, when only a morning ceremony is scheduled.

Convocation ceremonies are open to the public and tickets are not required. A reception for graduates, family and guests will follow each ceremony.

She’s a visionary; a focused leader who has made waves in the Canadian business world.

Maureen Sabia, Chairman of the Board for Canadian Tire Corporation, will receive an honorary degree from Brock University and give the convocation address during the afternoon Goodman School of Business ceremony on Thursday, June 8.

“It is especially poignant for me as I grew up in St. Catharines,” Sabia said. “I vividly remember discussions about the concept of starting Brock University at the Sabia dinner table when it was still just an idea. 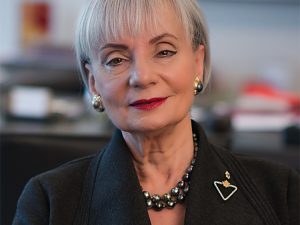 Sabia is the daughter of high-profile social activist Laura Sabia (who received her own honorary degree from Brock in 1979). Laura instilled in her daughter a belief that women could do anything men could do, and when Maureen Sabia attended law school at the University of Toronto in 1965, she was one of only three women in the class.

Sabia has gone on to break new ground for women in business on many fronts. After initially working for the Ontario Securities Commission and then as an assistant counsel to the Ontario Law Reform Commission, she started her lengthy career in the private sector, first with Canadian Pacific Limited and then Redpath Industries.

She has served on the audit committees and boards of directors for numerous corporations across multiple sectors. Sabia also served as Vice-Chairman of the Public Accountants Council for the Province of Ontario, as well as Chairman for Foreign Affairs and International Trade Canada.

In the post-secondary sector, Sabia has served on the boards or advisory councils at Brock University, University of Guelph, University of Toronto, Dalhousie University, the Perimeter Institute and the Montreal Economic Institute. She was the founder and first chairman of the Women in Management Research Project at the University of Western Ontario.

But Sabia is best known for her work with the board of Canadian Tire Corporation, where she has served for more than three decades.

As chairman, a title she prefers over the more common female options of ‘chairwoman’ or ‘chair’, she has been a vocal and hands-on leader, guiding the company through expansion, competition and the rise of e-commerce.

Her career achievements have been recognized nationally. In 2009 Sabia was named one of Canada’s 100 Most Powerful Women, in 2011 she was named an officer of the Order of Canada and a year later she was awarded the Queen’s Diamond Jubilee Medal.

Sabia said her message to students will focus on what it takes to be successful.

“Your judgment and your attitude towards work will be critical to your success,” she said. “Be curious, courageous, relentlessly determined and never be afraid to ask ‘why.’”

Untold numbers of youth and adults who have learned the Mohawk language have David Kanatawakhon-Maracle to thank.

Kanatawakhon is a Mohawk from the Tyendinaga First Nation near Belleville, and after high school and a job with the Department of Indian Affairs in Ottawa, he returned home to teach the Mohawk language to elementary school students. With no curriculum or study materials readily available, Kanatawakhon set about creating his own.

“Years ago I realized that without our language we have no culture,” he said. “When our language is gone we don’t have anything. We basically just have a bunch of museum pieces. 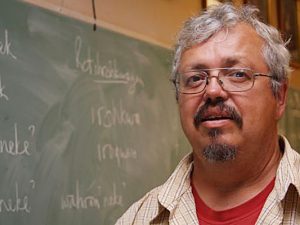 In 1983, after arguing why he deserved to be there, Kanatawakhon went to the University of Western Ontario, where he earned a BA focusing on linguistic specialization. He went on to teach Mohawk language in the school’s Department of Anthropology, where once again he faced the prospect of creating his own teaching materials.

During his time at Western, as well as 12 years spent teaching Mohawk language and other courses for the Aboriginal Studies program at Brock, Kanatawakhon wrote numerous dictionaries, textbooks and other teaching materials in both the Mohawk and Oneida languages.

Kanatawakhon’s texts — which now include five dictionaries — have become the foundational tools for those learning indigenous languages. He has been credited with playing a significant role in saving the Mohawk language. It’s a remarkable feat that few individuals have ever achieved, but he’s humble in recognizing his own role.

“There are a lot of Mohawk people who are working hard to keep the language alive,” he said. “I’m not the only person out there. I’m just one spoke in a wheel. I may or may not be remembered for it, but I don’t care. The material is important. Getting the language out there is all that matters.”