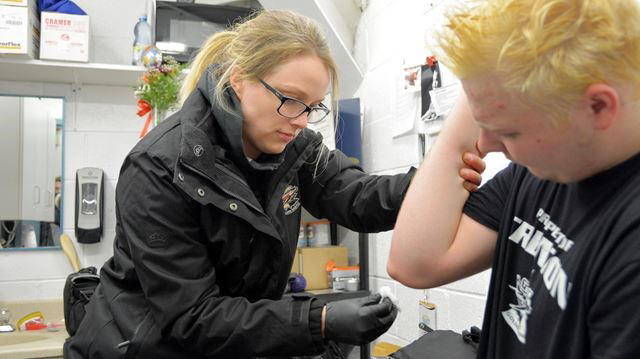 The Brock University alumna has been making strides in the hockey world as a therapist and trainer for the Trenton Golden Hawks.

Her efforts in the male-dominated industry over the past four years have not gone unnoticed.

Ditmars was recently named the Ontario Junior Hockey League Trainer of the Year.

She is the first female to hold the honour.

During her time at Brock, Ditmars worked as a student trainer in the University’s Athletic Therapy Clinic providing sports medicine care to varsity and recreational student athletes.

She was one of only 20 students accepted into the clinic program with Joe Kenny, Head Athletic Therapist at Brock.

“Sarah really embraced the diverse experiential learning opportunities that Brock University and the Department of Kinesiology offers at the undergraduate level,” Kenny said.

“She was a high-energy, goal-oriented student who was always dedicated to serving athletes at Brock.”

Ditmars said her time with the school clinic played a large role in shaping the career she has today.

It helped her to build a strong work ethic and gain the experience needed to net a job soon after graduation.

Ditmars had been home in Trenton, Ont., for less than two weeks when she scored a position at a local therapy clinic.

She has since branched out on her own, offering rehabilitation and individual fitness coaching for athletes through Sarah Ditmars Sports Performance in addition to her work with the Trenton Golden Hawks.

She is now in her fourth season with the hockey team.

Ditmars admits there was some initial hesitation at the thought of working for a boys’ hockey team, but she’s happy with her decision to take the job.

“I was young when I started and there was a lot of pressure on the team’s managers to hire a female trainer,” she said. “I knew I needed to go into it and just get the job done.”