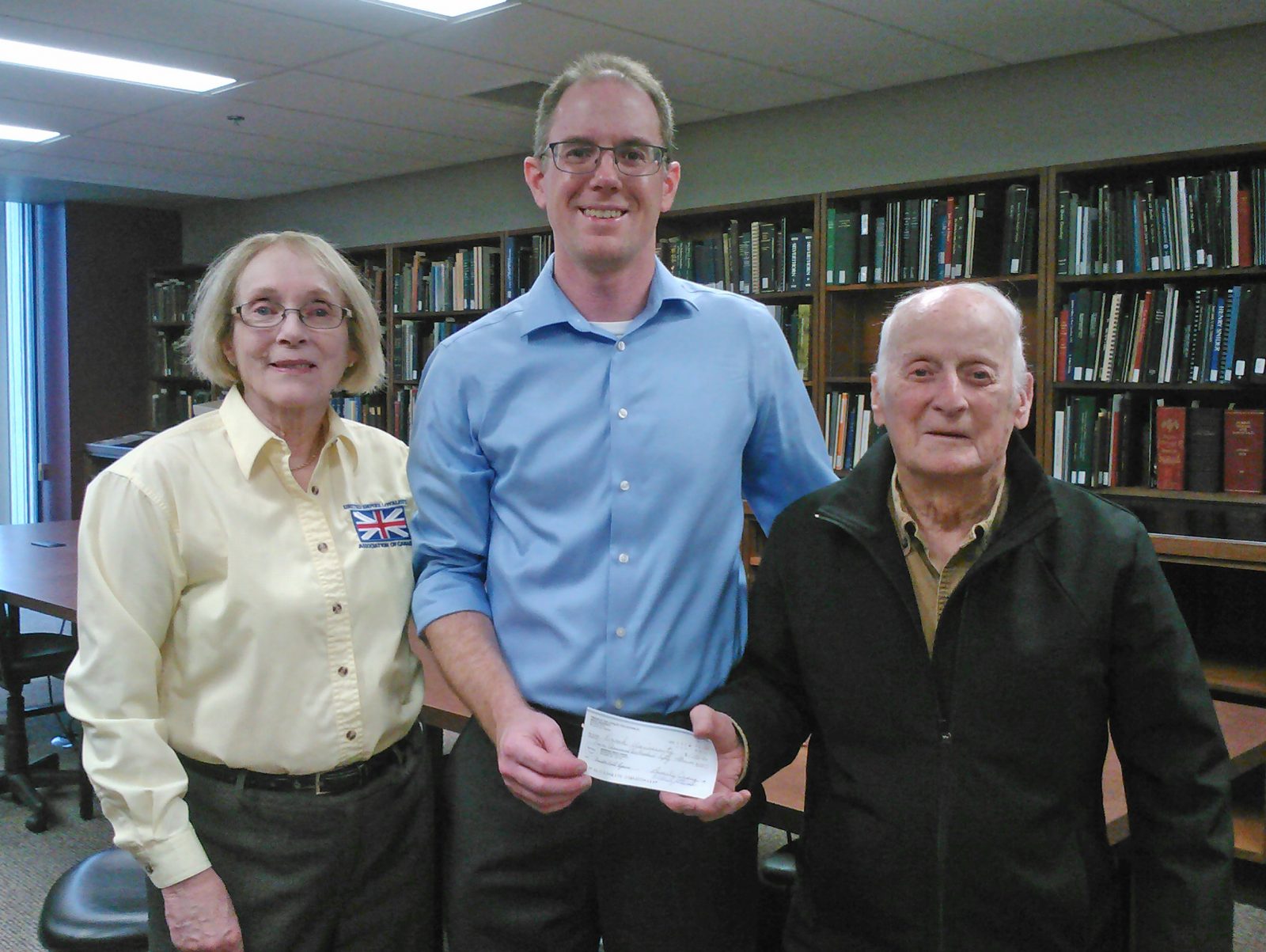 Beverly Craig, left, and Rodney Craig, right, of the Friends of the Loyalist Collection at Brock University, recently presented David Sharron, Brock University’s Head of Special Collections and Archives, with a cheque to purchase a Loyalist archive.

Even before Canada was an independent nation, it was welcoming political refugees from America.

At the time of the American Revolution (1775-1783), some Loyalist Americans who supported King George III found themselves in danger.

Property was destroyed, land was confiscated and the threat of mob violence loomed in many areas.

With these pressures and the desire to remain under British rule, many Loyalists immigrated to other countries within the Empire.

These refugees became known as the United Empire Loyalists (UEL) and those who came to Canada, including about 5,000 who settled in Niagara, helped shape the development of the future nation.

For the past 15 years, a group of descendants from the UEL have been working to ensure that the history of the Loyalists in Canada can be studied at Brock.

In 2002, Edward Scott, Beverly and Rodney Craig, William Smy and Noreen Stapley formed the Friends of the Loyalist Collection at Brock University (FOTLCABU) with the intent to help the Special Collections and Archives acquire primary and secondary source materials on the UEL.

Funding began with a donation from the Lincoln & Welland Foundation and continued when Smy allowed the proceeds from his book, An Annotated Nominal Roll of Butler’s Rangers with Documentary Sources, to go towards the campaign.

Contributions have also been received over the years by the United Empire Loyalist Association of Canada and some of its branches, as well as private donors.

About $50,000 has been raised to date, with the money used in several ways.

Much of the official documentation of the UEL migration to Canada can be found in national, provincial and state archives across Canada, England and the United States.

The FOTLCABU identified the most important collections available and ordered microfilm copies for Brock. More than 500 films have been purchased.

Whenever a noteworthy book on the Loyalists was published, the Friends acquired it for the collection.

The Friends recently funded the digitization of the entire Woodruff Family archival collection, which was designated as significant cultural property to Canada in 2015.

The Woodruffs came to Niagara shortly after the revolution, married into a Loyalist family and quickly became a political and economic power in Niagara and Ontario.

The records can now be viewed on the Special Collections website.

In December 2016, the Friends helped the University, now one of the key repositories for Loyalist resources in Canada, acquire the original records of the Bradt and Field Loyalist families.

The Loyalists were not simply a mass of former immigrants from the United Kingdom.  They were a multi-national, multi-ethnic and multi-religious group from all social and economic classes who preferred to live under the laws of the British Empire.

They helped settle and populate British North America, what would later become Canada, in its most formative years.

The original refugees and their children defended their new home against the Americans during the War of 1812.  The Loyalists became the politicians and business people who shaped Canada’s government and economy.

Without the United Empire Loyalists, Canada may not be the nation it is today.

For more information, visit the Friends of the Loyalist Collection website.

To see the collection in person, visit the Special Collections and Archives on the 10th floor of the Brock Library.