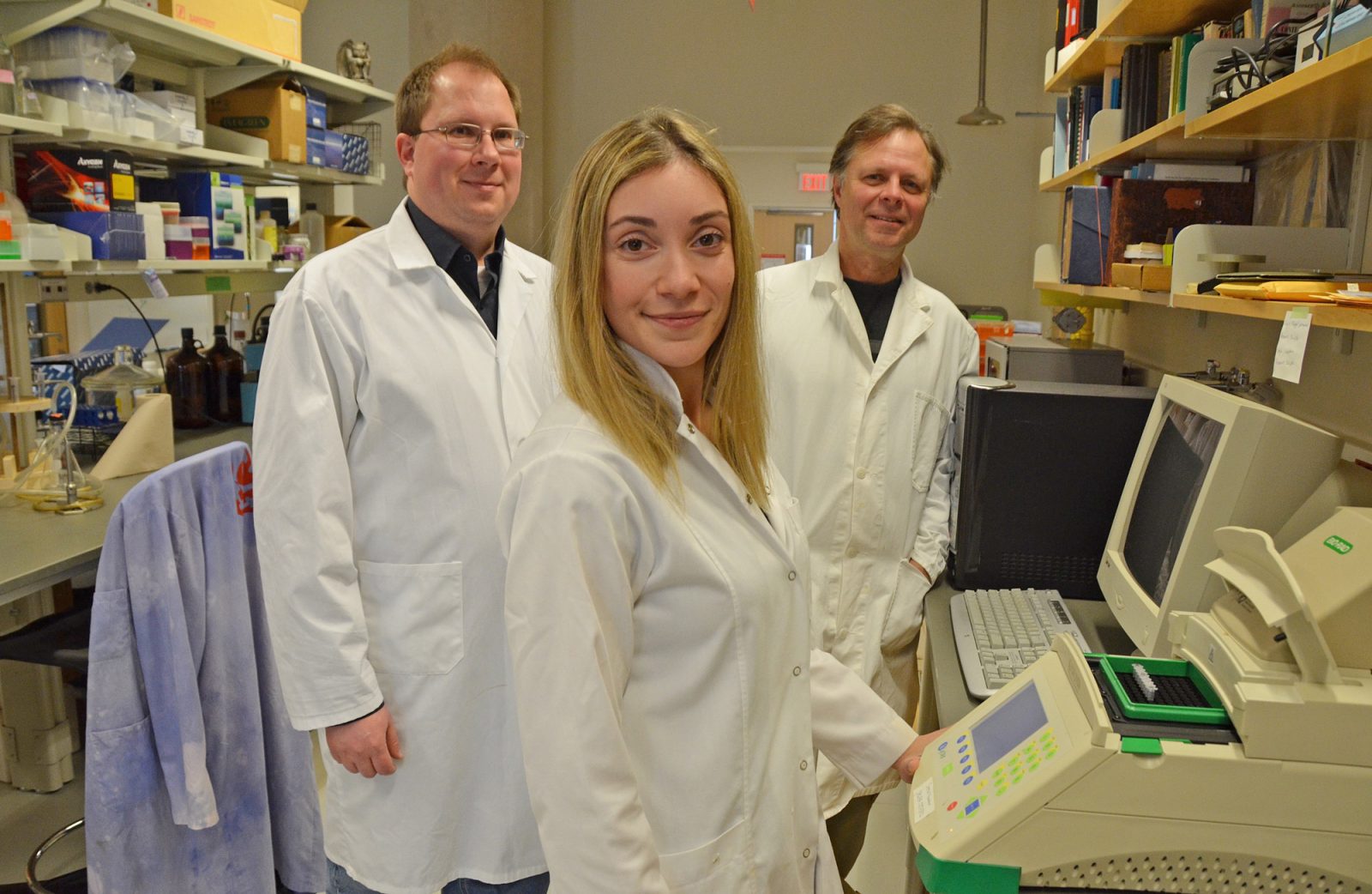 From left, chemistry instructor Paul Zelisko, graduate student Larissa Barelli and Prof. Mike Bidochka were part of the Brock University team involved in researching the interaction between fungus and plants.

It’s a match made in plant heaven.

Several years ago, Brock University researchers discovered that a certain type of fungus could potentially make a good natural fertilizer to replace the chemical-laden options that are typically used.

Now, the researchers have found that this nitrogen-supplying fungus is even more efficient because it can receive energy from the plants, making their relationship self-sustaining.

“It’s very exciting to have contributed to the greater understanding of these natural interactions,” said Professor of Biology Michael Bidochka of his team’s findings, published January 18 in the journal Nature Communications.

“It’s a great feeling to know that research like this can be applied to improving agricultural practices. Ultimately, our desire is to eliminate our dependence on chemical pesticides and if we can better exploit this natural phenomenon, we may be able to achieve our goal,” he said.

In the original study, the researchers discovered that the Metarhizium fungus kills bugs and transfers nitrogen from those bugs to the roots of plants.

The new research reveals that plants, in turn, transfer carbohydrates back to the fungus.

“This brings the interactions of the fungus Metarhizium with its host plant full circle,” said Bidochka. “This is the other half of our earlier research.”

It’s a mutually beneficial relationship. Plants need nitrogen to grow, develop and reproduce, yet plants often find it difficult to get enough nitrogen.

“Our atmosphere is loaded with nitrogen,” said Bidochka. “Yet, interestingly, all nitrogen in plants come from bacteria in the ground unless commercial fertilizers are used.”

These bacteria “fix” nitrogen, or make nitrogen available to plants by binding it with other chemicals. 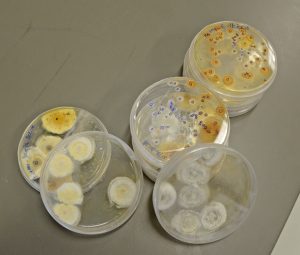 Nitrogen is also key to a plant process called photosynthesis in which plants harness energy from sunlight and fix carbon dioxide, producing carbohydrates.

Because the fungus is giving the plant more nitrogen from the insects that the fungus kills, the plant is able to create more carbohydrates.

Bidochka’s research team — in cooperation with chemistry instructor Paul Zelisko, graduate student Larissa Barelli and Scott Behie, who published the original discovery of the nitrogen transfer when he was a graduate student in 2012 — found that some of these plant carbohydrates made their way back into the fungus.

In addition to being plant food, carbohydrates are also food for the fungus.

“One of the most limiting resources for organisms living in the soil is free carbon,” said Bidochka, adding that the soil-dwelling fungus is unable to photosynthesize its food from sunlight. “This fungus has figured out a way to get a good source of carbon.”

When Behie, Bidochka and Zelisko’s research was published in the prestigious journal Science in 2012, it was hailed as a breakthrough in the understanding of how nitrogen cycles through soil.

Scientists had documented that Metarhizium, a widespread and naturally occurring fungus, feasts upon more than 200 different kinds of soil-born insects, which are a source of nitrogen themselves.

Metarhizium is also a plant endophyte — meaning it lives inside the plant without causing any harm to its host.

“I knew that Metarhizium was an insect pathogen,” Bidochka recalls. “I put two and two together and I said, what’s in insects that plants have? And I thought, it’s nitrogen.”

He and his team proceeded to show, for the first time, that the fungus sucked nitrogen out of the insects’ bodies and made this nitrogen available for roots to take this up into the plant.

In this latest round of research, the team took the fungus-plant relationship one step further.

“We said, ‘What’s in it for the fungus? Why does the plant allow the fungus to associate with its roots as an endophyte?” Bidochka said.

The researchers were able to trace carbon that the plant produced during photosynthesis in carbohydrates found in the Metarhizium fungus using nuclear magnetic resonance spectroscopy.

The team’s paper, “Carbon translocation from a plant to an insect-pathogenic endophytic fungus” was published January 18 in the journal Nature Communications.